The NDP debate: Numsa draws its line in the sand 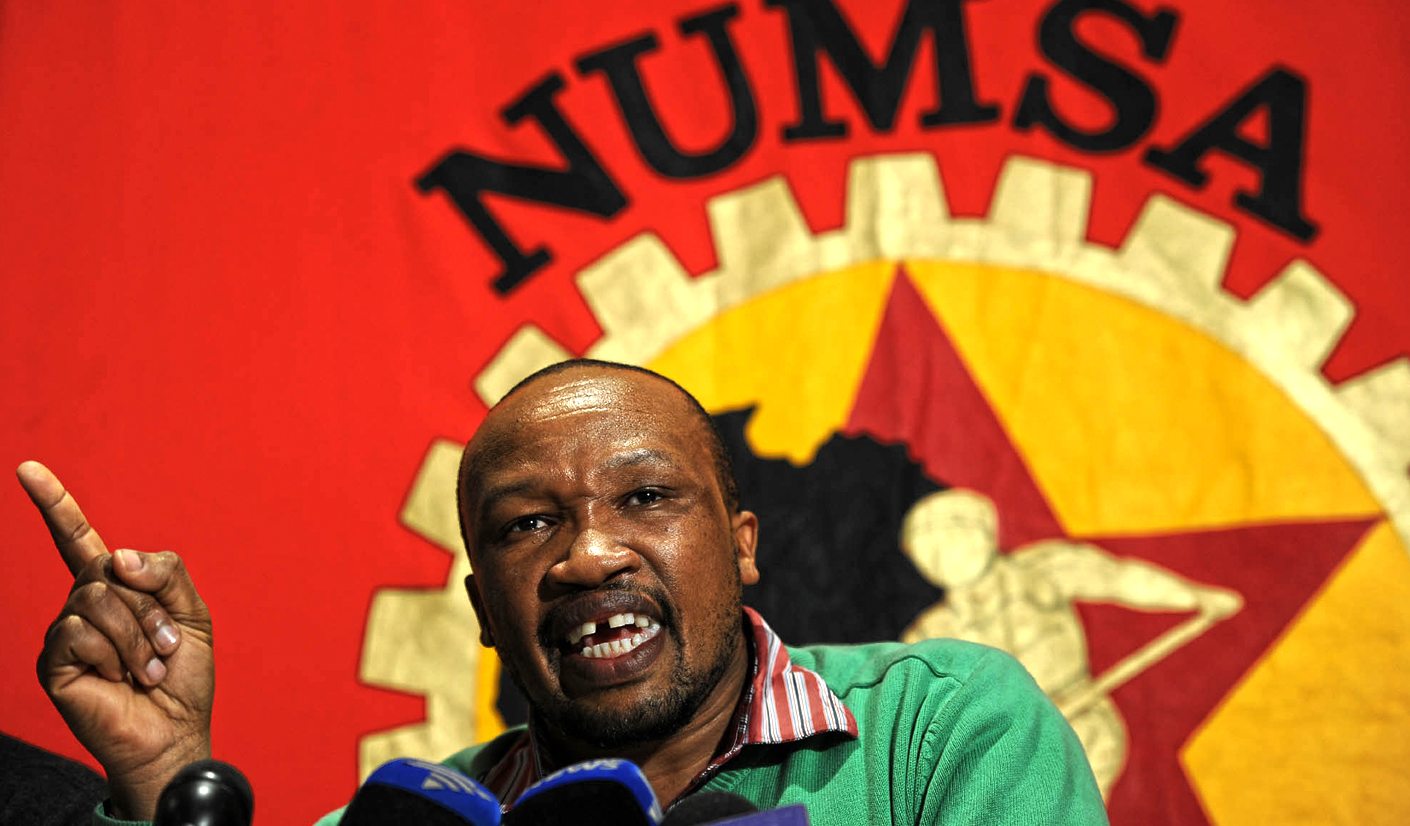 It turns out that the two people who could not be more politically different, Numsa’s fiery Irvin Jim and Democratic Alliance leader Helen Zille, actually agree on something: that the National Development Plan is rooted in DA policy. The metalworkers’ union has now thrown down the gauntlet on the NDP – turf it or we will push Cosatu to oppose the ANC’s election manifesto. This sets the scene for major fights within Cosatu and in the Alliance. But what happens then? Who would Numsa and a fractured Cosatu vote for? By RANJENI MUNUSAMY.

In November 2011, when the National Planning Commission (NPC) launched the draft National Development Plan (NDP), the Democratic Alliance (DA) was among the first parties to hail it as an “exciting and significant development”.

“The NDP is rooted in the same analytical framework that underpins the DA’s own political philosophy – the ‘open, opportunity society for all’,” DA leader Helen Zille said at the time.

“And this is exactly why the NDP will struggle to get off the ground under the current ANC government. The ANC’s alliance partners and the populists in the Youth League will almost certainly block the implementation of the plan for reasons of ideology and self-interest,” Zille said.

These days, the ANC Youth League, populists and otherwise, no longer present a challenge as their leadership has been dissolved and the ANC’s one alliance partner, the SA Communist Party, would rather dissolve themselves than oppose anything Luthuli House has sanctioned.

That leaves one unhappy player in the alliance: Cosatu. The trade union federation has not yet rejected the plan outright but has expressed serious concerns about aspects of it, particularly pertaining to the labour market. Cosatu general secretary Zwelinzima Vavi said at the federation’s collective bargaining conference last week that a raft of policies in the NDP generated déjà vu as it bore similarities to government’s Growth, Employment and Redistribution (Gear) macroeconomic strategy, which Cosatu and the SACP fought vehemently.

However, the ANC completely disregarded its alliance partner’s reservations and adopted the NDP in its entirety at its national conference in Mangaung. With competing interests within Cosatu, and indeterminate hostility towards him, Vavi is careful to steer clear of the war talk on the NDP when articulating the federation’s disapproval of it. He is also mindful not to jump the gun, as an internal discussion document on the NDP is currently under discussion by Cosatu’s affiliate unions and the federation will only have a definitive position on the plan in May.

National Union of Metalworkers of SA (Numsa) general secretary Irvin Jim does not have the same constraints.

“What we do not want is this plan. What we want is our Freedom Charter to be implemented,” Jim said at a Numsa media briefing on the NDP on Tuesday.

In a 32-page critique of the NDP, Numsa shows how the NDP leans closer to DA policy rather than Cosatu perspectives. Jim says the NDP indicates among other things, “the adoption of neo-liberalism by the ANC government” and “the sidelining of the Alliance in policy formulation and implementation”.

“We have consistently raised the structural matter of the relationship of the NPC to the ANC government and to the ANC itself, and we have rejected the effort to place the NPC above both the ANC government and the ANC itself – as some kind of ‘super meritocratic policy thinker’ of post 2007 South Africa. We reject the NPC false attempt at being non-ideological when in fact the NPC’s outputs clearly betray a neoliberal bent,” Jim said.

Numsa is currently running a campaign to educate its members in all provinces on the NDP and wants to make a big push within Cosatu for the federation to also reject the NDP. Responding to some barbed comments directed at Numsa, and Jim in particular, by among others National Planning Minister Trevor Manuel and ANC deputy secretary general Jessie Duarte, the union said:

“Some people seek to present us as spoilers. They want to coerce the industrial proletariat and its allies into sheepish silence and ignorance. They want to put us down, shut our voices up, and push through a policy based on ignorance, like they are doing with the youth wage subsidy, which is based on false research, as Cosatu has demonstrated.”

At the media briefing, Jim drew a line in the sand: Numsa will oppose the ANC’s election manifesto if it includes the NPD.

“The ANC has every right to adopt the NDP, but we as an alliance have every right to reject it,” Jim said. The alliance in this case would mean only Cosatu, as the SACP seemingly does not have the same objections that the NDP would prejudice the working class.

Jim said, however, that Numsa had “not taken a decision that the ANC has sold out”, hinting that they were leaving the door open for dialogue.

But will any of this rattle ANC secretary general Gwede Mantashe or President Jacob Zuma? Zuma has the propensity to vacillate depending who he is speaking to or whether he feels the pressure – as has been evident on the youth wage subsidy and education as an essential service. Mantashe does not, and ploughs ahead irrespective of the opposition even from his own constituency in Cosatu. At last week’s Cosatu bargaining conference, he simply said he would not respond to the objections raised by Vavi.

Now Jim is upping the ante, and is threatening to push Cosatu to oppose the ANC election manifesto if it includes the NDP. This means Mantashe and Zuma need to use their stealth weapon: their assets within Cosatu. Prominent Cosatu leaders such as its president Sdumo Dlamini, National Union of Mineworkers president Senzeni Zokwana and National Education, Health and Allied Workers Union general secretary Fikile Majola now sit on the ANC’s national executive committee, which means they are bound by the decisions taken by the ruling party.

They campaigned for the positions supposedly to influence the ANC towards Cosatu positions. When push comes to an election battle, clearly the ANC will use them for the reverse purpose.

Jim said on Tuesday: “We have a choice to sing hallelujah and fold our arms, but we are not doing that.” What he is doing is marching first on the battlefield. The first battle will be within Cosatu. Judging by the balance of forces at last September’s Cosatu national congress, and outside forces pulling strings within the federation, Jim and Vavi would have an uphill battle trying to sway Cosatu to take on the ANC.

The only weapon they have is Cosatu’s electoral support for the ANC. But Numsa and Cosatu’s big problem is that they have no political home outside the ANC. In the event of a face-off over the ANC’s election manifesto, what would their options be if the do not get their way? Jim already says they would never consider voting for any of the opposition parties.

Unless a new political party emerges that could tickle workers’ fancy, the only option a splintered Cosatu – obviously there would be those who would opt to still support the ANC regardless – would have is to withhold their vote or de-campaign against the ANC. None of these will be desirable for people who spent their lifetimes under the ANC umbrella.

When Cosatu’s leadership meets in May, it will decide on its composite position on the NDP. That will be the indicator of whether a monumental battle is coming in the alliance or whether Cosatu is prepared to fold. Whatever happens, “singing hallelujah” is never going to sit well with Jim and his fellow travellers. For them this is now a political life and death fight. DM