Marikana: How much, and when, did Zuma know? 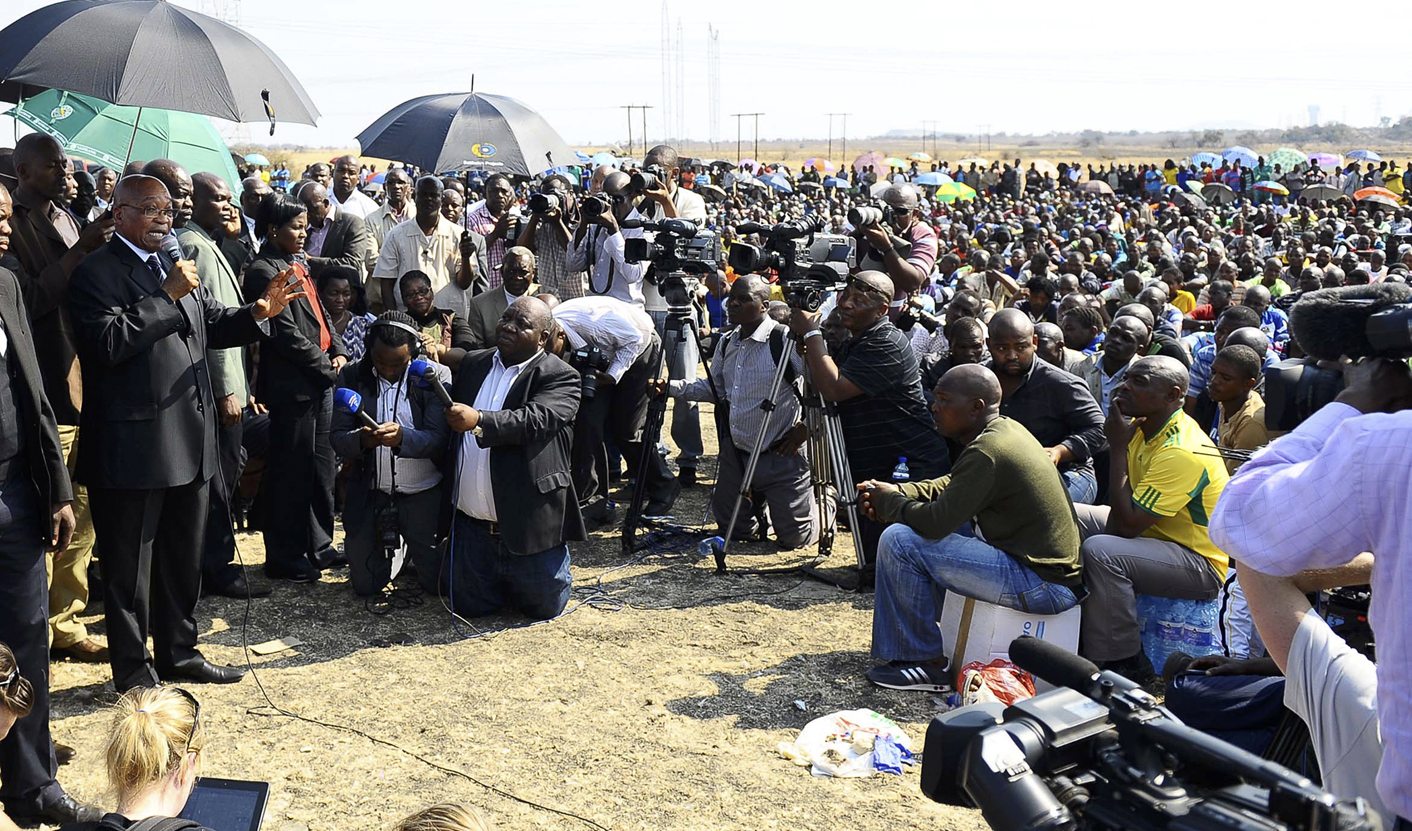 The Marikana Commission of Inquiry is moving into a different phase, after the testimonies of police officers, unionists and miners were heard. On the stand now is national police commissioner Mangwashi Phiyega, and she must answer for her part in the operation that led to the Marikana massacre on 16 August 2012. She will be able to say just what the top police planned to do, and may help shed light on what President Jacob Zuma and the national cabinet knew before the operation began. By SIPHO HLONGWANE.

When the Marikana Commission of Inquiry began in late October last year, advocate Dali Mpofu, acting on behalf of more than 250 men who were either wounded or arrested by the police on 16 August at Marikana, said that his task would be to show that the shootings were a premeditated murder of defenceless and powerless people.

“[A] toxic collusion between the police and Lonmin or the state and capital was causative of the massacre,” Mpofu said.

He continued to say that the police committed unjustifiable murder and cold-blooded executions during the 16 August operation, which was mounted by several hundred heavily-armed police officers to quell a wildcat strike at Lonmin and ended in the deaths of 34 miners and the injury of a further 78.

Advocate Dumisa Ntsebeza, acting before the commission for the families of 21 dead miners, said: “We will invite the Commission to make the finding that the miners were unlawfully killed by the SAPS.”

The chain of command from the police officers on the ground in Marikana, right up to the president of the country, will be of great interest to the Commission, as it will establish who knew what and most importantly, who decided to carry out the operation in a deadly manner that it was. We already know from numerous witness statements at the Marikana Commission that the police started taking a strong interest in the Marikana strike after 10 August, with a 13 August shooting incident involving rival unions and security guards bringing even more police and a determination to disarm and disperse the crowd.

There are several issues with how the operation was planned and carried out. According to testimony by Brigadier Johannes Petrus Breytenbach, a police trainer, the public order policing units should have been in charge, as this was a crowd control situation. However, there were not many POP units present in Marikana, and were reinforced by the special task force and the paramilitary tactical response team as well as dog and other units. Lawyers have argued that this was a grave mistake, as it led to a situation where several hundred police were outnumbered by several thousand miners.

But it isn’t clear that the top police thought that the operation was going to be a simple ‘disperse & disarm’ one. More than one forensic investigator who testified said that they were called in (a team of four) on the day to count and catalogue all the weapons that the miners would surrender, yet lawyers at the Commission like George Bizos SC have questioned why so many forensic experts would be needed for a straightforward counting job.

With lawyers looking to show that the police went too far at Marikana, they will also seek to point someone out as the person who gave them permission to respond as aggressively as they did. Phiyega told the press soon after the massacre that she was aware of the operation and green lighted it before it began.

But could several cabinet ministers and the president himself have had intimate knowledge of the operation? Did they know how far the police would go?

Emails sent between Lonmin executives and ANC deputy president Cyril Ramaphosa suggest that President Jacob Zuma was told of the wildcat strike before 16 August. The correspondence, already the subject of great controversy, was sent after several deaths had occurred, and shows that the company wanted the government to view the strike as criminal actions, and not a labour dispute, and thus send in the police or army to break it up.

On 15 August, Ramaphosa mailed Lonmin management to let them know that he was going to have a meeting with mineral resources minister Susan Shabangu in Cape Town to discuss Marikana. Later (on the same day), he mailed again to say that the meeting had taken place.

“I have just had a discussion with Susan Shabangu in Cape Town,” Ramaphosa wrote. “She agrees that what we are going through is not a labour dispute but a criminal act. She is going into Cabinet as well and will brief the president as well as get the minister of police to act in a more pointed way.”

The Thursday when the shootings happened was chosen to be ‘D-Day’ some days before, meaning that the police would have had a good idea of what they were planning by the Wednesday night/Thursday morning time period in which Ramaphosa spoke to Shabangu, and she then spoke to the rest of the Cabinet. The commission has already heard from Phiyega that police minister Nathi Mthethwa was being kept in the loop from about 13 August.

Mpofu has already promised to argue that Ramaphosa’s emails prove that the point of the operation was sinister, and while the facts as we know them so far do not tell us a complete story, the police do have to explain why they decided to ignore an internal memo by Mthethwa, asking them to use precaution when dealing with violent crowds. If they knew from the get-go that things would turn ugly, then why did they decide to launch the operation as if it were still a disarm and disperse one?

In a nutshell, Phiyega must help answer why the police seemingly tore up their own rulebook on the day. She can even perhaps answer if the very highest political leadership in the country knew beforehand that a heavily-outnumbered contingent of police was going to disperse a large crowd of hostile men armed with traditional weapons.

Last week, Phiyega spent her time in the stand fighting back against negative public relations. She was accused in the press of laughing when she attended the Commission last year. She denied this, and also had to backtrack after a video was shown of her congratulating the police for Marikana a few days later.

Meanwhile, the Sunday Times reported that, in a perhaps not entirely unexpected twist, the police commissioner is responding to the public criticism levelled at her by saying that she is the victim of sexism.

“Why, when Phiyega comes it becomes a huge debate? The president can appoint a man or a woman to control and manage the organisation and I had the requisite skills,” she reportedly said.

“Are we having a veiled gender debate? What is the discomfort? You can feel that there is a sense of discomfort but what is it?… I’m trying to unmask the discomfort.”

Phiyega’s cross-examination is due to begin this week. DM