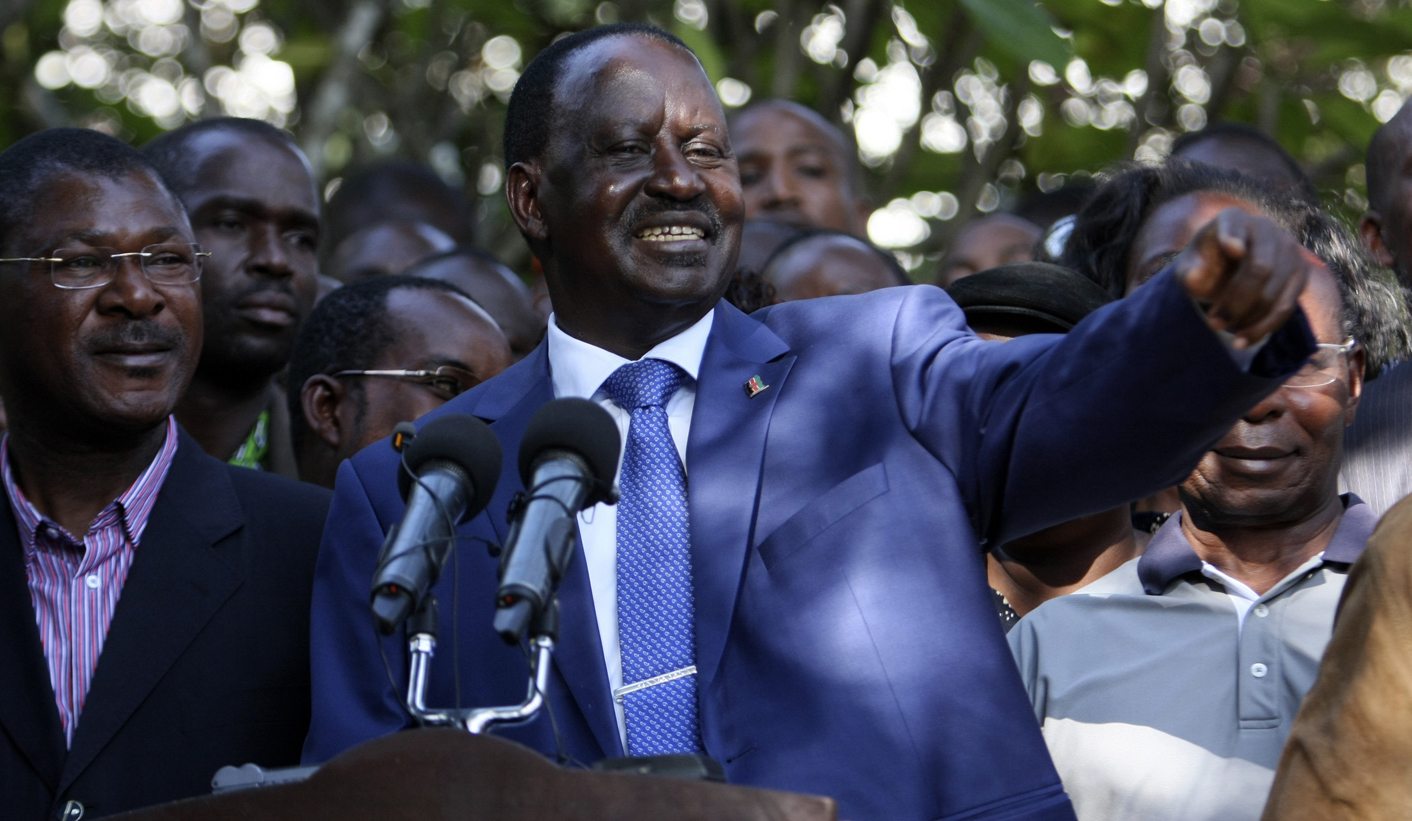 Two weeks after Kenyans went to the polls, the runner-up in the presidential race is challenging the result in court. The country has so far maintained peace throughout the process, which is continuing to throw the hurdles of democracy at anyone who hoped this would be over quickly. By GREG NICOLSON.

Raila Odinga, runner up to Uhuru Kenyatta in the 4 March presidential poll, filed an application to the Supreme Court on Saturday to have the election results and the process leading up to the 9 March announcement declared void in full. If successful, the court petition could invalidate the victory of not only Kenyatta and running mate William Ruto but also each candidate elected to the national assembly and senate, meaning new polls would be required.

Kenyatta won the country’s first elections since a disputed result in 2007-08 led to ethnic-based violence and the death of more than 1,100 people and the displacement of hundreds of thousands. The leader of the Jubilee Coalition and the son of Jomo Kenyatta, the nation’s first president, he narrowly avoided a run-off with Odinga by taking 50.07% of the vote.

“We spent tens of billions of shillings and yet every mechanism and every instrument the IEBC (Independent Electoral and Boundaries Commission) deployed failed miserably,” said Odinga outside the courthouse on Saturday. “I am not challenging the election outcome because I am determined to be declared president, but I realised that to do otherwise would be a betrayal of the new constitution and democracy given the malpractices.” As Odinga was filing his petition, police lobbed teargas at his supporters in downtown Nairobi who had gathered peacefully to support the Coalition for Reforms and Democracy (Cord) leader.

Despite fears, the complicated and perilous election process has so far been relatively peaceful with both election aspirants and a wide range of civil society and media committing to peace. Kenya Red Cross declined on Sunday to comment to Daily Maverick on whether it had noted any violence or whether the disputed results raises any fears.

“We don’t comment on elections as we are neutral. We need peace in our country and talking about violence whether real or imaginary is not our priority. Let’s work together towards peace. How does reporting on violence assist Kenyans?” the organisation’s Nelly Muluka asked. She referred us to the IEBC which we were unavailable to contact on Sunday, but the election body backed its results and endorsed Kenyatta on 9 March.

Odinga’s court application claims the election was neither free nor fair. He believes there were more voters on election day than were registered and the IEBC willingly ignored the discrepancy. The electronic voting system, which was abandoned due to massive challenges and inaccuracies, was a catastrophe that was so poorly implemented it shows that the IEBC intended to count the votes manually, says the application. Odinga’s affidavit lists in detail the areas in which he claims there were discrepancies.

Election observers from the European Union, African Union and Kenyan civil society mostly approved the election day voting while noting challenges regarding the electronic transmission of results. Their approval means little however without scrutiny of the manual counting of the votes. Allegations of vote rigging, meanwhile, have emerged (see here and here). The civil society group Kenyans for Peace, Truth and Justice (KPTJ) also filed a petition against the IEBC in the supreme court challenging the process.

“I believe that (the IEBC, Kenyatta and Ruto), in breach of the constitution, failed to establish systems which are accurate, secure, verifiable, accountable and transparent and indeed declared results which in many instances had no relation to votes cast at the polling station, developed methods which were opaque, and intended to manipulate the results in the course of which the (Cord’s) representatives were altogether excluded from the process,” reads Odinga’s affidavit to the court.

Shailja Patel, a prominent poet and representative of KPTJ, told Daily Maverick that Kenyans’ reaction to the court challenge is split, but there is relief that those dissatisfied with the results can go to court. “The availability of the judicial option is arguably the single greatest change since 2007, along with the new constitution. In 2007, the courts were not an option as no one had any faith in the independence of the judiciary. So the faith in the judiciary in 2013 is heartening, and is a testament to the gargantuan reform project led by the new chief justice, Willy Mutunga. For Kenyans to see the Supreme Court in action, applying the constitution in the days ahead, and holding the IEBC to account for failing the Kenyan people, will be unprecedented in Kenya’s history,” said Patel.

She was an observer at the Bomas of Kenya Election Centre. “It was truly shocking to witness the lack of transparency and accountability displayed by the IEBC, and even worse, the IEBC’s contempt for questions about the systemic failures of the electoral process,” said Patel. “The principle at stake here is the accountability of the IEBC to the people of Kenya. If we cannot trust our institutions to deliver, then we cannot move forward as a country. This is the basis of KPTJ’s filing in the Supreme Court. The real winners and losers of this election are 43 million Kenyans.”

Kenya is still grappling with the effects of the 2007-2008 post-election violence and Patel refers us to The ICC Witness Project, a site with pieces from Kenyan poets and the diaspora aiming to give a voice to the missing witnesses for the International Criminal Court trial of president-elect Kenyatta, vice president-elect Ruto, and Joshua Arap Sang for their role in the 2007-08 post-election violence. On Monday, the ICC dropped charges against co-accused Francis Muthaura after a key witness recanted his testimony.

Kenyatta has assured voters that he and Ruto will appear at The Hague, but there are doubts that the two will get there as they have continued to challenge the legitimacy of the charges and, if in power, may be able to intimidate witnesses or make it harder for the ICC’s prosecutor to operate.

But before they appear on charges of crimes against humanity, the declared winners of the Kenyan election will be watching Odinga’s application in Kenya’s Supreme Court. “I have repeatedly indicated my commitment to respect and abide by the Supreme Court ruling. I invite my brother Uhuru to publicly do the same. His joining me would strike a huge blow for the rule of law in Kenya and would also immediately reduce tensions generated by this election outcome,” said Odinga on Saturday. “Any violence now could destroy this nation forever.” DM