Mvula trust, minister Baloyi and the basic question of trust 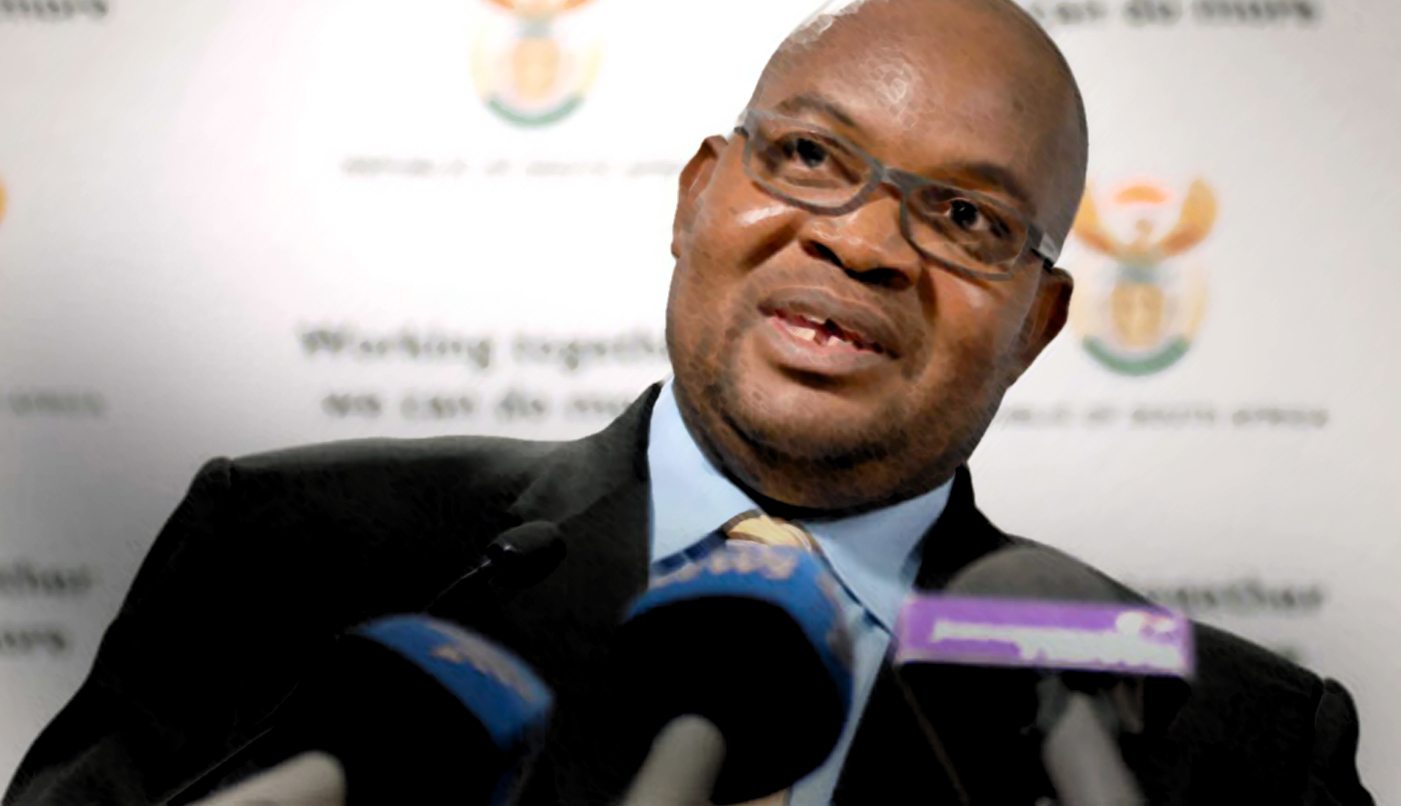 Five weeks ago, we asked why government is silent on the scandal involving the Mvula Trust and its R30-million tender. By door-stopping Minister of Cooperative Governance and Traditional Affairs Richard Baloyi we finally got some answers, none of them informative or reassuring. What Baloyi spewed revealed a frightening level of arrogance and hostility and what appears to be a complete lack of accountability. ALEX ELISEEV wonders if this is how ministers should behave...

To understand just how much of a fiasco this all is, allow me to give you a quick summary of facts: In 2011, the Department of Cooperative Governance and Traditional Affairs awarded a R30-million tender to the Mvula Trust. In return for the money, Mvula helps the department distribute hundreds of millions of rand from government coffers to about 70,000 community-based workers around the country. This is part of a bigger initiative known as the Community Work Programme, which aims to reduce poverty and create jobs. The tender runs until next year.

Subsequently, Mvula’s acting CEO, Silas Mbedzi, was axed by the trust’s chairwoman, the deputy minister of water and environmental affairs, Rejoice Mabudafhasi. This happened before a new CEO was appointed.

Last week, dozens of community workers – the very people who are meant to be paid by Mvula – arrived at the organisation’s Braamfontein offices to demand their wages. Some complained they hadn’t been paid in three or four months and could no longer afford to buy food, pay rent or send their children to crèche.

Mvula promised to issue a statement but must still be spellchecking it.

On Friday, my colleague at Eyewitness News, Barry Bateman (you probably know him as @barrybateman) was at a function attended by Richard Baloyi. Baloyi is the very same minister who failed to show up to address thousands of angry Zamdela residents in Sasolburg earlier this year – an action which left at least six dead people and bloody trail of destruction behind.

Briefed on the Mvula story, Bateman pulled Baloyi aside. Remember this is the department that gave Mvula R30-million in taxpayers’ money and trusted it to channel hundreds of millions more to the poorest of the poor.

The first question to Baloyi was fairly simple and one that should have been answered five weeks ago: what is the department doing about the allegations swirling around this tender?

Baloyi launched into his answer: “Mvula Trust has a board. Mvula Trust has the executives who are dealing with the day-to-day administration of Mvula Trust. I studied the question correctly… and that question related to an answer which the board had to give. I spoke to the chairperson of the board and she showed me the answer to that question and she released that response to yourself. And she showed me what she said. That should suffice.”

You’re probably a little confused. Not to worry. In essence, he’s saying that Mvula Trust has spoken and how dare we pester him with any more questions.

The fact that he is the custodian of public money and is responsible for how it’s spent seems to have slipped past the minister.

Asked to clarify how he could simply take Mvula’s word instead of launching his own investigation, Baloyi explained: “You see, I’m not a minister of Mvula Trust. I’m a minister of the portfolio of cooperative governance and traditional affairs.”

Don’t panic… he added: “You need to understand what I’m saying… If you pay the trust, you don’t take over the trust’s administration.”

By that enlightened logic, the Department of Public Works has no right to investigate the tenders that went out for the construction of President Jacob Zuma’s Nkandla home. Thulas Nxesi is, after all, not the minister of Nkandla.

Baloyi pushed on, saying that Mvula Trust has a code of conduct that allows its trustees to participate in business deals, as long as they declare this participation.

“Did you not get their response?” he asked.

The allegations that there was collusion from inside his own department or that Mvula was not able to deliver on the tender because it had been used as a front seemed not to matter.

Baloyi was asked about the workers who have not been paid in months – a clear indication that there are, at best, cracks in the project and, at worst, a failure to deliver on the mandate.

“Is the department not worried that people doing government work are not being paid?” Bateman enquired.

“You appear to know how Mvula operates. I’m not running the day-to-day. I’m not aware of people (arriving) at Mvula Trust. I wouldn’t be aware. My office is not sitting at Mvula Trust,” came the response.

“Are you worried by what is happening?”

“Are you part of those people who are not being paid?” Baloyi had the nerve to ask a journalist. “Those people… let them come to me. I won’t allow any person who deals with us to operate in a way that undermines the rights of people. If you do your work you must to be paid. But they need to demonstrate what work they have done… If those people feel they have an issue, let them come to our office.”

“About people not being paid.”

“Who is not being paid? You can’t ask me, why are you not asking Mvula? I’m asking you. Go and ask Mvula. If they say they are not paying them because the department hasn’t paid them, come to me and we’ll get the answer. Don’t take people’s questions and you’re not even sure… that’s negative publicity.”

“So there’s nothing wrong with what’s happening with Mvula… everything is fine according to you?”

“You have to be specific about what you’re asking,” Baloyi replied.

Then he did something extraordinary.

“Can we close this interview. It’s not helpful,” he declared as he walked away.

As the recording ends, the last question echoes off the minister’s back: “No, no, what I want to find out is: are you satisfied that Mvula is doing what they are supposed to be doing with the tender? Answer the question!”

The tape rolls for a few seconds, with footsteps in the background.

Let’s look at the highlights:

About the only good thing to come out of the interview is that Baloyi’s offer to sit down with us and get into the details of the tender is now on record. We’ve been asking for a full interview for over a month.

We’re ready when you are, minister Baloyi.

1. Baloyi’s attempt to distance himself and his department from the goings on at Mvula, including the alleged non-payment of wages, is utterly disingenuous.  The Department of Cooperative Governance and Traditional Affairs is politically and administratively responsible for the Community Work Programme. That it has subcontracted the operations of the programme to a number of organisations, of which Mvula is one, does not absolve the department of its responsibilities.

2. In any event, the tender award made by the Department of Cooperative Governance and Traditional Affairs to Mvula is fraught with gross irregularities.  These have been extensively documented. In summary, Mvula effectively fronted for a company, Ubuntu Sima, owned by one of its trustees, which company was the major beneficiary of a contract that was expressly reserved for NGOs (like Mvula). The sub-contracting arrangement with Ubuntu Sima was not declared at the time the bid was made. Not only is this contrary to the rules of the bidding process but it meant that the department did not carry out the necessary due diligence required to ascertain whether Ubuntu Sima was capable of performing the extensive and vital functions that it was illegally sub-contracted to undertake. We have provided the director general of the department with the full details of this and other irregularities in the bidding process. We have received no response to this and nor has the Department of Cooperative Governance and Traditional Affairs responded to a second follow-up letter Corruption Watch.

3.  The question that arises is why the Department of Cooperative Governance and Traditional Affairs awarded the tender to Mvula when the process was characterised by such gross irregularities. Was this gross negligence? Or did persons in persons in the department have a material interest in making the award to Mvula and thus, effectively to Ubuntu Sima? Corruption Watch would have thought that the minister and the leadership of his department would have wanted to ascertain this urgently. Instead Baloyi denies any responsibility.

4. Indeed there is growing evidence that ALL the tenders awarded by the Department of Cooperative Governance and Traditional Affairs for the management of the Community Work Programme’s projects require urgent investigation. Our understanding is that three contracts – distinguished by their provincial location – were awarded by the department for the management of the Community Work Programme. One was awarded to Mvula and this, as our investigation has shown, was characterised by gross irregularities.

6. The Community Work Programme is a flagship anti-poverty and rural development scheme. It is intended to benefit the very poorest and most marginalised South Africa people and communities. Corruption Watch would have thought that Minister Baloyi and his department would have wanted, as a matter of the utmost urgency, to get to the bottom of this unfolding fiasco. Instead the minister has chosen to try and pass the buck, which clearly stops with him, on to others. DM

Exclusive: The Water Affairs Deputy Minister, her friends and the R30 million tender, at Daily Maverick