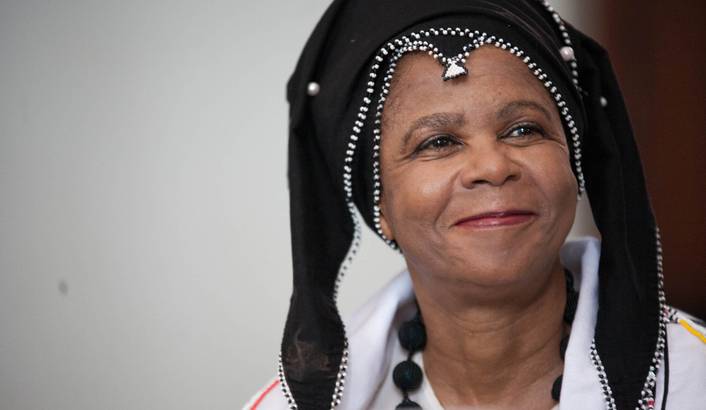 Anglo American Platinum is closed as a result of a worker stay-away in the aftermath of violence at the company’s Siphumelele shaft in which 13 people were injured. Some were shot with rubber bullets, and others hacked with pangas or machetes. One remains in a serious condition at Johannesburg’s Milpark Hospital, police spokesman Brigadier Thulani Ngubane said. Company spokeswoman Mpumi Sithole told Reuters the stoppage was illegal. The violent outbreak was due to tension between rival unions, AMCU and the National Union of Mineworkers. Workers have accused Amplats of interfering in union issues.

Reeva Steenkamp has been honoured at a private funeral service for family and friends held in Port Elizabeth at the Victoria Park Crematorium. The law graduate turned model died in the early hours of Valentine’s Day after being shot by her boyfriend, Paralympic athlete Oscar Pistorius. “There’s a space missing inside all the people that she knew that can’t be filled again. We are going to keep all the positive things that we remember and know about my sister,” Steenkamp’s brother Adam told reporters. “We will miss her.” Her uncle, Mike Steenkamp, thanked people at home and abroad for their support, saying the compassion shown to the family was “tremendous”.

Oscar Pistorius’ bail hearing at the Pretoria Magistrate’s Court has been postponed until Wednesday. The star athlete would remain in custody until then, said Magistrate Desmond Nair. The postponement followed a day of high drama in which an affidavit by Pistorius was read out to the court by his lawyer in which he denied murdering his girlfriend, Reeva Steenkamp. “I fail to understand how I could be charged with murder, let alone premeditated murder because I had no intention to kill my girlfriend,” he said. Pistorius said he was “deeply in love” with Steenkamp. He said he’d received death threats, and after getting up to close sliding doors, thought he heard intruders in the toilet. It was at that point that he fired the fatal shots.

MAZIBUKO: ZUMA IS THE ‘WRONG MAN FOR THE TIMES’

South Africa is a great country being let down by a weak president, says Democratic Alliance parliamentary leader, Lindiwe Mazibuko. “He is the wrong man for these times,” she said in response to Zuma’s State of the Nation Address last week. South Africa had lost confidence in him as a leader, she said, adding that the speech “was devoid of new ideas and vision”. Mazibuko said the worst betrayal of all was Zuma’s abandonment of the youth wage subsidy. “Has the President ever reflected on what it must feel like to be a young person without a job in South Africa today? Does he feel for the five million South Africans under the age of 34 who are unable to find work?” she asked. “Because the speech he gave on Thursday didn’t sound like he does.”

The Johannesburg High Court has dismissed a R200,000 lawsuit brought by former police commissioner Bheki Cele against the Sowetan newspaper. Cele accused the paper of defamation after reports that he’d told a business gathering in Durban that if threatened, police should “shoot to kill”. In the second story, the Sowetan said eight criminals had been killed less than 10 days after Cele allegedly made the “shoot to kill” remarks. Cele, in his evidence, said he had used the terms “aim for the head” and “use deadly force”. The court argued these terms were the equivalent of “shoot to kill” and dismissed the case.

Protestors in Phillippi near Cape Town have trashed at least two sets of traffic robots in the second day of protests by resident of the Marcus Garvey informal settlement. Community leader Thanduxolo Makana told the Cape Argus over 700 protestors burned tyres, barricaded roads and destroyed traffic lights on Eisleben Road. Residents are demanding land and better living conditions, accusing the city’s human settlements division of failing to address their concerns. They want nearby land developed for housing, but council has told them the land is “already reserved or owned by someone else”, Makana said.

Minister in the Presidency, Trevor Manuel, has told a media briefing at parliament that government needs to reform its supply chain “significantly”, saying it was the “Achilles’ heel” of this administration. Manual said government systems that were “uniform and compliant” and that this would be “ a fundamental public sector reform”. He also supported public service and administration minister Lindiwe Sisulu’s call for a ban on public servants doing business with the state. “I think we are pretty convinced, as Cabinet, that the idea that a public servant should be allowed to run businesses at all is a wrongful interpretation of the constitutional provision that people should have the right to have businesses,” he said.