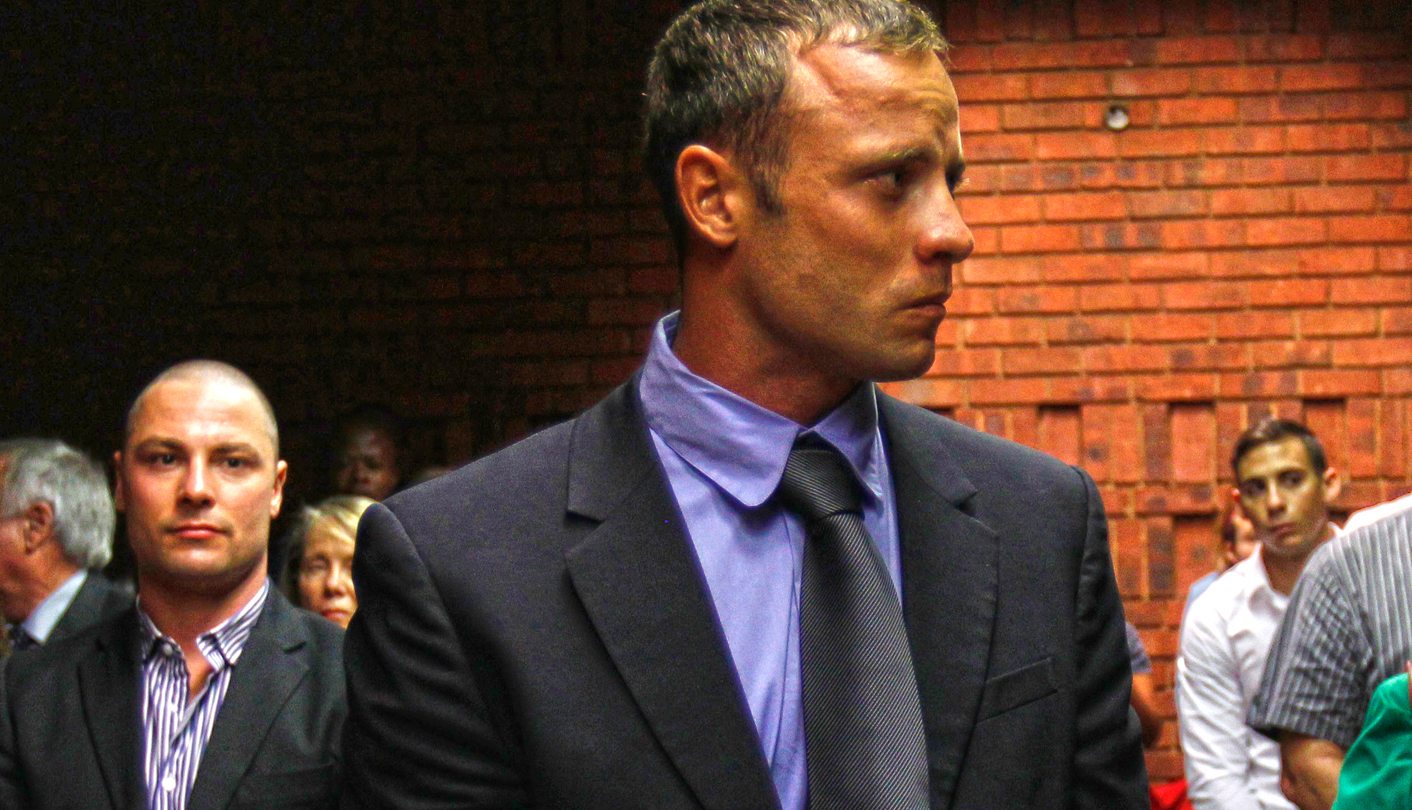 As Olympian and murder-accused Oscar Pistorius took the Pretoria Magistrate’s Court Tuesday for his bail application, media from across the globe flocked to get a story. GREG NICOLSON was there.

Photo: “Behind the line,” said Justice Department security and police as dozens of journalists and onlookers tried to gain entry to court C, where Pistorius’s bail hearing was held. The small Pretoria Magistrate’s courtroom could not cater for the throng of local and international media and many journalists were forced to wait outside. Greg Nicolson / Daily Maverick

Photo: “Voetsek! Voestek!” sang the 10 ANC Women’s League members who came to protest against violence against women outside the court building. No prizes for guessing whom their command was directed at. Greg Nicolson / Daily Maverick

Photo: Outside the court, newspaper vendors plastered the day’s headlines on the building’s walls. Reeva Steenkamp, killed by Pistorius in the early hours of Valentine’s Day last Thursday, was cremated in Port Elizabeth Tuesday in a ceremony attended by family and friends. At the same time, Pistorius was weeping uncontrollably in the Pretoria court. Greg Nicolson / Daily Maverick

Photo: Minister of Women, Children and People with Disabilities Lulu Xingwana made a brief appearance outside the court. Xingwana, centre, with Gauteng MEC of Safety Faith Mazibuko to her left, said the court must come down hard on Pistorius and laws should be changed so no South African has a gun in the home. Greg Nicolson / Daily Maverick

Photo: Radio, print, television and online media from across the globe flocked to the Pretoria Magistrate’s Court. Those who weren’t inside waited for the few moments of action outside the front door. Paramedics caused a stir when they brought a stretcher to court, a rare moment of interest. Greg Nicolson / Daily Maverick

Photo: Securtity remained tight around the courtroom throughout the afternoon while the state and Pistorius’s legal teams offered their version of Steenkamp’s death. The state succeeded in its application to charge the athlete with premeditated murder. Pistorius’s team submitted applications claiming the killing was a mistake and he was very much in love with the 29-year-old model and law graduate. Greg Nicolson / Daily Maverick

Photo: After the proceedings, Pistorius was whisked away by a police van with its windows covered. The bail hearing continues Wednesday. Greg Nicolson / Daily Maverick

Photo: The action around the court caused passersby to stop and watch the action and try their luck to get on TV. Here, an onlooker gets close to National Prosecuting Authority spokesperson Medupi Simasiku, left, as he offers his details to journalists. Simasiku declined to comment on details of the case but said the bail hearing would be completed this week. Greg Nicolson / Daily Maverick