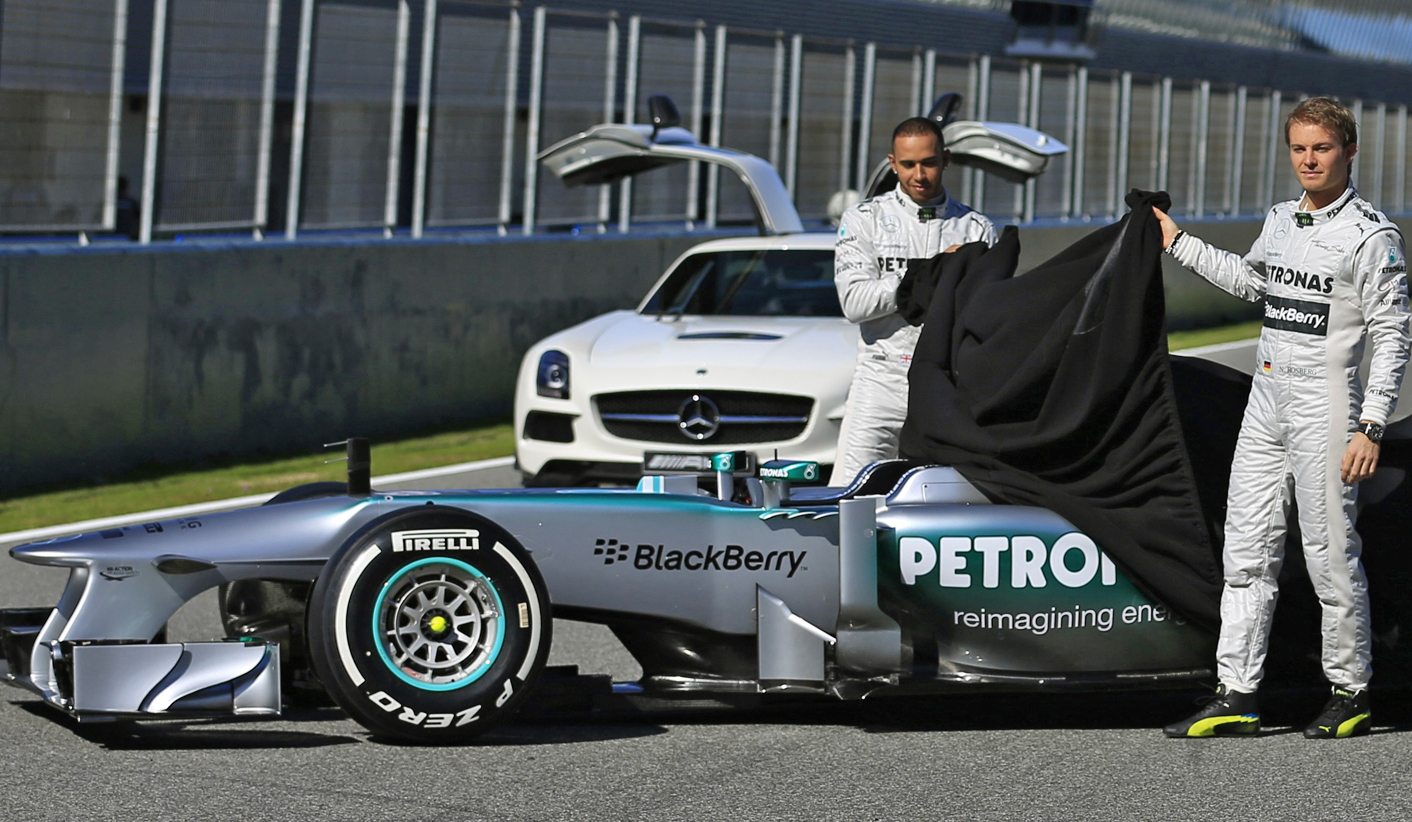 Lewis Hamilton was all smiles as he showed off his new Mercedes Formula One car on Monday, even if the 2008 world champion was clearly still adjusting to life after McLaren and may have to wait a while to win again. By Alan Baldwin.

“When I first drove in, I stopped by a McLaren and I thought it was just strange to see it and not be going to it this time,” he told reporters after unveiling the F1 W04 car on the Jerez pit straight with team mate Nico Rosberg.

Hamilton said he had been so excited that he could not sleep on Sunday night, although the Briton looked relaxed and refreshed enough as he chatted to reporters in the Jerez sunshine.

“I’d already seen the car in the wind tunnel, so I’m not surprised or anything like that, but it’s beautiful. I love the paint job,” he said.

“It won’t be until after the next couple of days that we can start to get a feel for it and I can see what direction I want to push the guys in,” added the winner of 21 races.

“I’m heading into this with an open book, a blank sheet and I really don’t know what to expect. I just hope it has lots of downforce.”

The 28-year-old, whose ties with Mercedes go back to his teenage years in junior series, had no doubt that he was in the right place with the German manufacturer and that the future was looking bright.

“I have worked with Mercedes-Benz for a very long time now, and I learned one thing most of all: Mercedes-Benz doesn’t know how to lose,” Hamilton said in prepared comments.

“We are playing a long game here but I know we will have success together and I’m excited to be a big part of making it happen.”

Hamilton, winner of four races with McLaren last season, was team mates with Rosberg before both entered Formula One and the Briton said their renewed pairing was a dream come true.

In a press release, he also gave a nod to his illustrious predecessors at the ‘Silver Arrows’.

“It is an honour for me to tread in the footsteps of legends like Juan Manuel Fangio, Sir Stirling Moss and Michael Schumacher,” said the man who has replaced the seven-times champion.

The new car had already completed its first laps before the formal unveiling, with Rosberg at the wheel to start a 100km shakedown allowed by the regulations before official testing starts on Tuesday.

An evolution of last year’s car, the F1 W04 has an aggressively packaged rear end while the front makes use of a ‘vanity panel’ to smooth out the ‘broken nose’ characteristic of the 2012 version.

Team principal Ross Brawn said it marked “the start of a second era” for the works team, whose victory in China last year was their first since the carmaker bought then-champions Brawn GP in 2009.

“The restructuring we undertook at the team over the past 18 months is now growing in maturity and this is reflected in the F1 W04, which is a clear step forward in design and detail sophistication over its predecessor,” he added.

“Many thousands of hours of work have been invested by our technical teams in Brackley and Brixworth to ensure that the new car delivers a step change in performance compared to last season.” DM

Photo: Mercedes Formula One racing driver Lewis Hamilton (L) of Britain and teammate Nico Rosberg of Germany unveil the new Mercedes W04 Formula One car during its presentation at the Jerez racetrack in southern Spain February 4, 2013. Formula One teams start testing their 2013 cars in Jerez this week. REUTERS/Marcelo del Pozo

Kirsten Pearson and Steve Kretzmann for GroundUp • 5 hours ago