Zamdela: A failure of the public consultation process 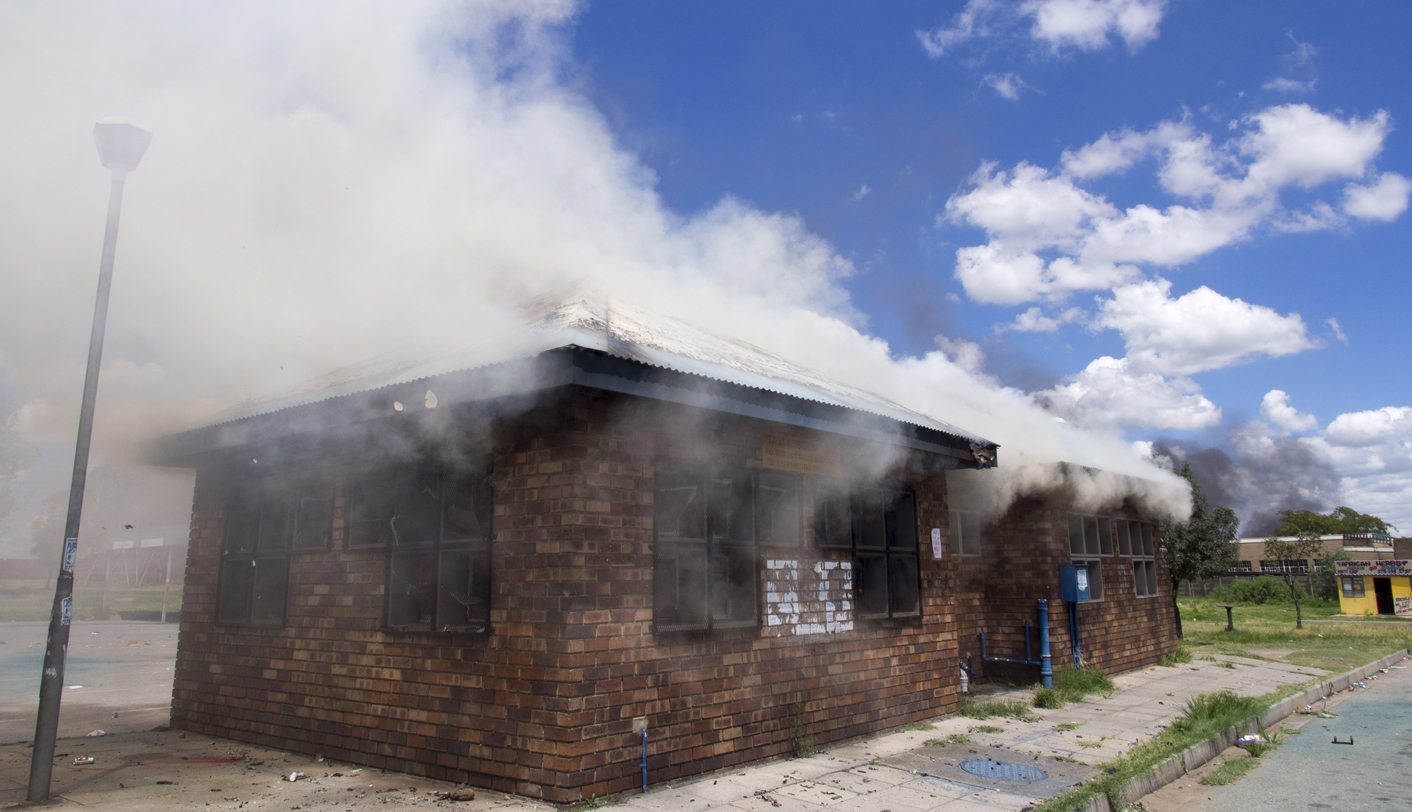 After the deaths of at least six people, damage to property worth millions of rands and a deeply scarred community, the Municipal Demarcations Board met with Zamdela residents on Wednesday to find out what they actually thought of the proposed merger of the Metsimaholo and Ngwathe municipalities. What emerged was the all-too-familiar narrative of South African communities abandoned by the officials meant to represent them. By KHADIJA PATEL.

On the surface of it, there may not appear to be much in common between the grievances of striking mine workers in Marikana (or, indeed, Carletonville) and the residents of Zamdela, who protested against proposed changes to municipal boundaries. The striking mine workers wanted a pay hike; Zamdela residents refute a proposal to merge two municipalities in the Free State. And yet, beneath the ostensible energy driving both movements, there are communities who have been abandoned by the officials who are meant to represent them, their needs and their opinions.

What we remember of Zamdela months from now will probably consist largely of images of death and destruction. Haunting images of seemingly mindless violence. And yet the impetus of that violence is not easily photographed and captioned. These are people who feel they have been robbed of the right to have a say in decisions that dictate their lives.

On Wednesday, after a meeting with the Municipal Demarcation Board, Lucky Malebo, a representative of Metsimaholo Concerned Residents, stressed that it was a lack of consultation of with the community on the proposal to merge the Metsimaholo and Ngwathe municipalities that had angered residents. “The anger comes from the fact that we were never consulted with,” Malebo said.

Like him, Thandiwe Sekete – another Zamdela resident – believes the violence in Zamdela could have been avoided with better engagement from the local government.

“Government has neglected us. This thing could have been avoided if they only came to us in time. They just had to listen to us and communicated to us,” he said.

According to the Metsimaholo Concerned Residents, this was never done.

They say they first heard about the proposed merger in a media report, and after attempting to glean more information from the local council, were then forced to do their own research.

“We only got to know about this when someone heard about the demarcation and Googled it… We attempted calling a meeting with all the leaders from different parties, but the only people who showed up were two DA councillors,” said Madutsama Naphthaly Boyson Buang, a community activist in Zamdela.

By this time, the deadline for input from the community on the proposed merger had already expired.

“It was already in the papers and some of the leaders had already commented… The date for us to submit our opinion was closed,” Buang said. While some reports state that councillors had placed posters around Zamdela announcing the proposed merger and inviting feedback from the community, Buang says it was also advertised in a newspaper, but not particularly visibly.

“One of the notices was placed in the business section of a certain paper – and we only read soccer and some other things, not business; it was hidden from us,” he said.

Residents explain that they still don’t understand the why the merger has been proposed. To them it makes no sense.

“We do not get enough services as we speak – imagine when we join with another municipality,” Sekete said.

Malebo said that even after meeting with the Municipal Demarcation Board, residents still could not understand why the merger was being pursued. “Up to today we don’t know what the reasons are; the only thing we hear is that there will be great economic spinoffs,” he said.

“We did not want to go the violent way,” Malebo explained after meeting with the Municipal Demarcations Board on Wednesday. “All that we wanted was the councillors to come [and explain], because at that stage we did not know who made the proposal.”

“We did not advocate for riots or damage to property,” Malebo stressed.

He says, however, that together with no co-operation from local councillors, other niggling issues in the community exacerbated the situation.

“That’s where this chaos got bigger,” he said.

At that point, residents particularly wanted to know who was behind the proposal. That information was only conveyed to them on Wednesday, in their meeting with the Demarcations Board. The Free State provincial government made the proposal – this despite Free State Premier Ace Magashule’s office publicly denying any involvement in the merger proposal.

Residents had acted under suspicion that the local council was responsible for the proposal. The delayed transmission of this particular snippet of information indicates as well that the violence could perhaps have been avoided or at least lessened with better engagement with the community.

The chairperson of the Municipal Demarcations Board, Landiwe Mahlangu, agreed that the blame in the Zamdela crisis lay with the local government. He said, “One of the most disappointing aspects in this chain [of events] has been a failure by the local leadership to raise the level of awareness [of the merger].

“People are asking: did we assume [the councillors] would take the information back to the communities? It’s not an assumption, it’s an obligation – these are councillors who have been appointed to represent constituencies.

“It seems the information given to the council was never sent to the communities.”

But it’s not only local government that has disappointed Zamdela residents.

At the height of protests, Co-operative Governance Minister Richard Baloyi stepped in to put a halt to the municipal demarcation. The Demarcation Board, however, has pointed out that by law the minister is not authorised to do so. Baloyi, however, had told Zamdela residents that he had put a “stop” to the process.

“The minister’s (Baloyi) tone was somehow undermining our intellect when he spoke on radio and treating us like attention-seeking hooligans. We are not fools,” Buang said.

“If you really look at it, [Baloyi’s] words were just a lot of words that meant nothing,” Malebo said.

Like service delivery protests, the demonstrations in Zamdela were directed against the perceived self-serving of a municipality. The street action stems from a frustration with the channels available for engagement with government. People feel cut off from the structures governing their lives and when that disconnectedness is made apparent in a case like Zamdela, violence becomes a means of communication.