Gates, Buffett, can you hear me? Patrice Motsepe gives...

Gates, Buffett, can you hear me? Patrice Motsepe gives away half of family fortune 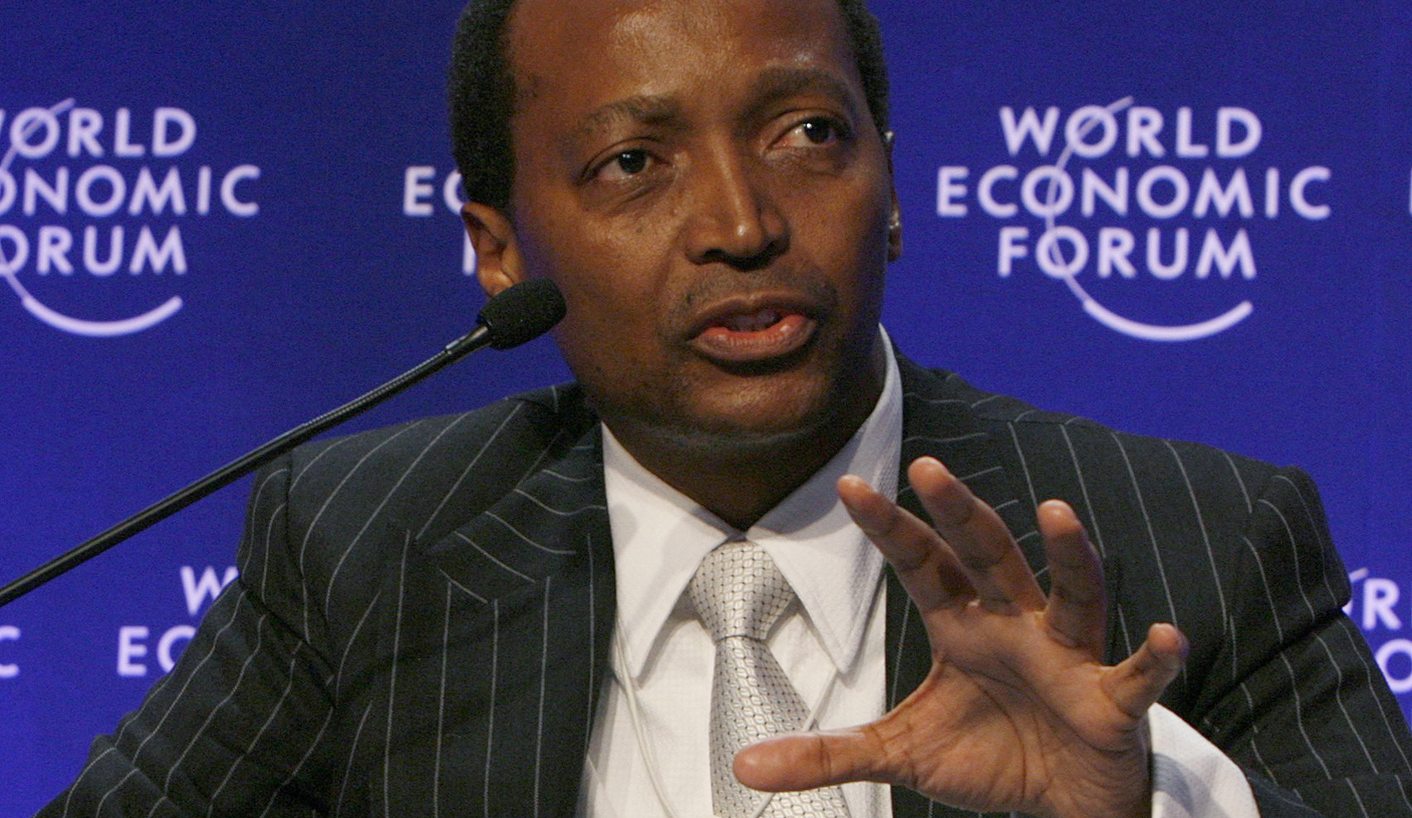 African Rainbow Minerals chairman Patrice Motsepe announced on Wednesday that his family would give away half its fortune to charity, as a part of Bill Gates and Warren Buffett’s The Giving Pledge. He becomes the first African to do so. How many will follow? By SIPHO HLONGWANE.

When ARM chairman Patrice Motsepe announced that he would be making an important announcement, the speculation was that he would be buying himself some newspapers. He was in Davos, and at the same time, Independent News and Media’s biggest shareholder Denis O’Brien met with President Jacob Zuma. The Irish group owns several papers, including The Star, Cape Times and Pretoria News, and has been seeking to unbundle its South African assets.

As it turns out, Motsepe’s announcement was of a different sort. The beneficiary will be the Motsepe Foundation, which was founded in 1999 by the ARM chairman and his wife Precious. It oversees the philanthropic work done by the family, which includes education and health; the development and upliftment of women, youth, workers and the disabled; churches; the development of entrepreneurs and social entrepreneurs; rural and urban upliftment; soccer including youth soccer development and music.

“I decided quite some time ago to give at least half of the funds generated by our family assets to uplift poor and other disadvantaged and marginalised South Africans, but was also duty-bound and committed to ensuring that it would be done in a way that protects the interests and retains the confidence of our shareholders and investors,” Motsepe said.

The give-away is a part of the Giving Pledge, which encourages wealthy people to donate their fortune to charity. Microsoft chairman Bill Gates and Berkshire Hathaway chairman Warren Buffett (formerly the world’s wealthiest man) founded the campaign in 2010 and have both committed large chunks of their sizable wealth to charitable organisations around the world. As of November 2012, 91 billionaires – mostly Americans – have committed to the pledge.

Motsepe said, “I was also a beneficiary of various people, black and white, in South Africa and in the US who educated, trained, mentored and inspired me and whose faith and belief in me contributed to my success in my profession, business and elsewhere. The same can be said about my wife, Precious, and we are deeply indebted to them and many more.

“Most of our donations have been private, but the need and challenges are great, and we hope that our Giving Pledge will encourage others in South Africa, Africa and other emerging economies to give and make the world a better place.”

Motsepe met with Buffett in the USA in August 2012, and with the Gates family in Cape Town later last year. The foundation will appoint an advisory council which will consist of “church and religious leaders, traditional, disabled, women, youth and labour leaders and other respected NGO and community upliftment leaders”.

According to Forbes, Motsepe’s net worth stood at $2.65 billion (R23.94 billion) in November 2012. ARM, the company he founded and chairs had a market cap of R43.47 billion at the time of the give-away announcement.  It isn’t clear when the donation will happen, but it is understood that it will happen in perpetuity.

Motsepe’s rise to the stop started in earnest when he became the first black partner at law firm Bowman Gilfillan in 1994. As a specialist in mining and business law at a time when black economic empowerment was just starting up, he had a front-row seat to some of the biggest mining deals of the day. He soon founded a venture which gleaned gold dust from inside shafts and began to buy marginal gold mines from Anglo Gold under very favourable financing terms when the gold price dipped in 1997.

At the beginning of the 2000s, Motsepe began to found a number of companies which would constitute the ARM conglomeration. One of the most important acquisitions was the 20% stake in Harmony Gold, the 12th largest gold mining company in the world with three mining operations in South Africa. The company soon expanded its range to include interests in platinum and platinum group metals (PGMs), iron, coal, copper, and gold.

Motsepe is named on the board of Sanlam, Absa and Harmony Gold.

He topped the Sunday Times rich list in 2012 with an estimated fortune of R20.07 billion. Despite winning many entrepreneurial awards and being hailed as a success story, Forbes noted that his wealth can’t just be explained by good business nous. His political connections made the difference.

“But for all the adulation, in South Africa such success comes with a price: being labelled an oligarch. Even many blacks have complained that the country’s 1994 transformation from Apartheid to democracy has benefitted only the elite few. The criticism stems from laws that require substantial black ownership in certain industries, including mining. A handful of politically connected individuals have grown enormously wealthy as a result,” Forbes said in a 2008 article.

Motsepe’s older sister Bridgette is married to Jeff Radebe, the minister for justice and constitutional development. He also chairs the ANC’s national disciplinary committee of appeals, a subcommittee of the national executive committee. Dr Tshepo Motsepe-Ramaphosa, Motsepe’s another sister is married to Cyril Ramaphosa, another black business mogul and current deputy president of the ANC.

Motsepe is a known funder of the ANC.

The tradition which inspired Buffet and Gates to start the campaign is a rich one – at least in the United States. Steel magnate Andrew Carnegie donated $350 million of his vast fortune to charity just before his death in 1919, and so did the one man whose name came to be associated with Great American Wealth: John D. Rockefeller. In fact, it was he who started the trend of targeted donations to aid medical, educational and scientific research.

Motsepe may be South Africa’s first black billionaire, but he is hardly the continent’s wealthiest man. That title goes to Nigerian industrial magnate Aliko Dangote, with an estimated net worth of about R113.6 billion. On a continent that consistently ranks as the worst-off in terms of quality of life, it remains to be seen if its wealthiest citizens will join Motsepe in giving away half their fortune to the less fortunate. DM