NUM, the incredible vanishing union; Cosatu in the danger zone 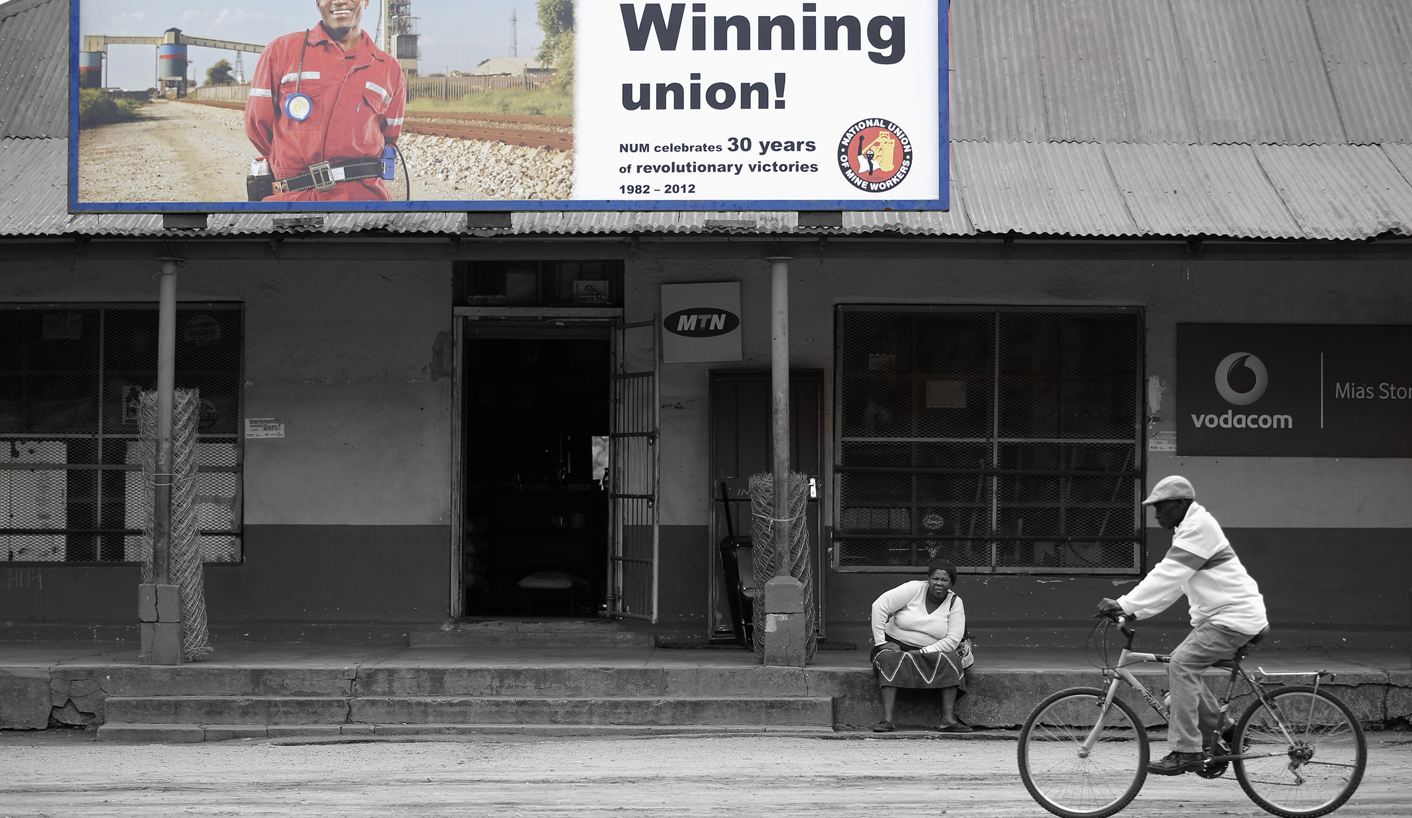 The decision by Amplats to restructure its South African platinum mining operations, close shafts and slash thousands of jobs has made glaringly obvious how hopelessly out of touch Cosatu and the National Union of Mineworkers are with developments in the mining sector. Sure, the NUM has expressed the requisite outrage but the fact is the mining giant was able to make such a far-reaching announcement in total disregard of the biggest mineworkers’ union and the supposedly powerful trade union federation. It is a sign of the impact of the shifting sands in the labour movement and its relationship with the ANC. By RANJENI MUNUSAMY.

National Union of Mineworkers (NUM) general secretary Frans Baleni claims Anglo American Platinum (Amplats) informed his union of its decision to review its South African operations five minutes before the public announcement this week. It is almost inconceivable that the company would treat the biggest worker union, which represents the majority of its workforce, with such disdain. Yet it did, and makes no apology for it.

The NUM’s reaction to the devastating announcement to its members betrayed its lack of power to do anything to reverse the decision, and its preoccupation with inter-union rivalry.

“The National Union of Mineworkers has noted with serious concern and shock Anglo Platinum’s decision to close four shafts and lay off as much as 14,000 workers. The NUM has repeatedly called upon workers to unite in order to defeat the evil nature of capitalism which seeks to put profits first and humanity last.

“We continue to make that appeal for workers to reject divisions and stay united to defend jobs. The proponents of divisions are now nowhere to be found when mineworkers are losing their jobs,” Baleni said in a statement.

“The NUM will engage the company in a bid to safe these jobs and appeals on workers to work together to safeguard their own jobs,” he said.

The “proponents of divisions” was an obvious reference to the Association of Mineworkers and Construction Union (Amcu) which gained traction during last year’s wildcat strike at the Lonmin platinum mine, which resulted in the deaths of 46 mineworkers and police. Amcu has since been growing in strength and influence in the mining sector. It was visible at the meeting of Amplats mineworkers on Wednesday when they decided to return to work, worried that an unprotected strike might cause further upheaval and job losses.

Cosatu’s reaction to the Amplats announcement has been rather muted. Normally quick off the mark to react to current events, Cosatu did not issue a formal statement on the matter. The trade union federation’s general secretary, Zwelinzima Vavi, who is still on leave, tweeted on Tuesday: “We engaging Anglo – whilst unprotected strikes worsened their situation but this restructuring is long planned – it’s about platinum prices.”

But Vavi’s hands are also tied after he was told to butt out of the NUM’s business when he tried to intervene in a strike at the Impala Platinum mine early last year. Workers at the mine were hostile to the NUM during the strike but allowed Vavi to address them. The NUM did not take kindly to Vavi stealing its thunder and advised him to stick to his job of running the federation.

The incident caused friction between Vavi and the NUM which eventually resulted in the mineworkers’ union not supporting his candidacy for re-election at Cosatu’s national congress last September.

But the NUM has been losing grip in the sector for some time already, and this boiled over during the strike at Marikana when Lonmin workers would have nothing to do with the union. In fact, the strike turned ugly because the workers reacted violently to their union reps and wanted to organise themselves. Throughout the Marikana crisis, the NUM was on the back foot, unable to regain the confidence of its members, accused of collusion with the mine management and the police, and powerless against the tide of anger and discontent that swept through the mining sector following the massacre.

The NUM has been caught flatfooted on the Amplats issue because it has been out of touch with developments in the platinum sector and has been consumed with the rivalry with Amcu. The union held its 14th national congress in May last year, but the problems brewing in the platinum sector were not mentioned once in NUM president Senzeni Zokwana’s speech. (The conflict with Amcu was, though.)

Similarly, apart from the negotiated response to the Marikana massacre, the Cosatu congress did not pay much attention to developments in the mining sector, despite the NUM being the biggest union in the federation. Instead the NUM was preoccupied with swaying Cosatu politically to fall in line behind  President Jacob Zuma’s bid for re-election as head of the ANC.

The NUM also managed to get its president, Zokwana, elected as national chairman of the South African Communist Party and onto the ANC’s national executive committee. This supposedly means that Zokwana, and the NUM by extension, will be more influential in the alliance. This influence is obviously not translating to the NUM’s members, who have steadily been losing confidence in their reps, and mining management, who showed this week that they do not take the political players seriously.

Cosatu and the NUM’s own research showed mass membership dissatisfaction with their union representation, yet neither organisation appears to have implemented effective measures to address the problem. The NUM’s research showed that Amcu was able to exploit its “internal leadership problems and weak branches.”

At Cosatu’s congress, Vavi was at pains to emphasise the “growing social distance between union members and leaders who enjoyed different, wealthier lifestyles and were out of touch as a result.”

In his organisational report to the congress, Vavi stated that according to a survey Cosatu conducted, 60% of the federation’s members are not satisfied with how their unions have dealt with securing better wages. He added there was also a perception that some union leaders were reluctant to take up issues for fear of embarrassing the ANC.

The “deliberately provocative” report was intended to “get us out of our comfort zones”, said Vavi.

“It presents an argument that says we must change by adopting a new mindset or simply perish… We must rediscover the very purpose of why Cosatu was created 27 years ago.”

But Vavi was censured at the congress for being too critical, and many of his warnings were disregarded.

The consequences of a weakening trade union movement are now becoming evident. As further turbulence is predicted in the mining sector, the NUM – and consequently Cosatu’s – leverage is diminishing. Workers are finding alternative ways to channel their grievances and mine management realises that it can successfully disregard the unions when making big decisions.

The NUM, once at the forefront of the anti-Apartheid struggle and a powerful force in society, is a shadow of its former self. Its weaknesses and failures are dragging down Cosatu with it. If rebellion and a lack of confidence among workers catch on, Cosatu will lose its place as a guardian in society and the most powerful voice of the working class and poor.

There are dark days coming and the NUM and Cosatu might be powerless to do anything about them. DM

Photo: A woman sits beneath a recruitment poster for the National Union of Mineworkers (NUM) near Rustenburg in the North West province October 13, 2012. REUTERS/Mike Hutchings