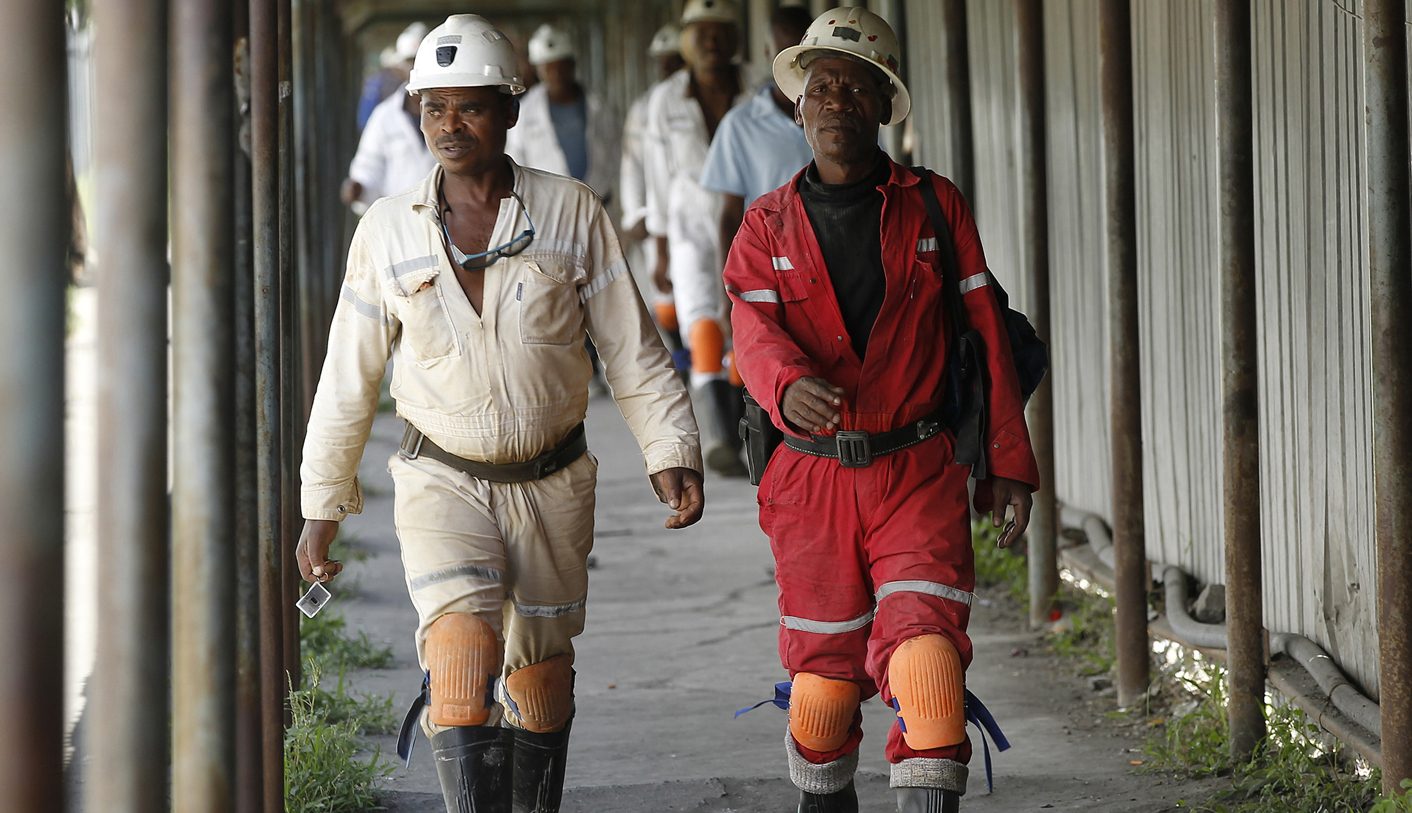 Following Anglo American Platinum’s announcement of plans to close shafts in Rustenburg and restructure its South African operations, workers are ready to act. About 23% of the company’s workforce may get the boot. Two mines are set to close and another will be sold. Workers, who were still dreaming of a pay rise, say they are now on strike. By GREG NICOLSON.

“The workers are very much angry,” Godfrey Lindani, an Amplats employee and leader of a strike committee from the 2012 mining strikes, told the Daily Maverick on Tuesday evening. He said all Amplats shifts were now on strike, starting with the Tuesday night shift and continuing with the morning shift. “All miners will not go to work until this thing is resolved,” said Lindani, who works at a Khomanani shaft set to close. He said workers ended 2012 hoping negotiations would continue in 2013 over demands for a salary above R15,000.

The Association of Mineworkers and Construction Union (Amcu), which gained a sizable number of members during the 2012 unrest, was unaware of plans to strike. “I have not heard about that,” said Amcu treasurer Jimmy Gana. He said the union has not started consulting its members yet as it is still waiting for Amplats to officially inform it of the restructuring plans, which were publicly released Tuesday. Amplats spokeswoman Mpumi Sithole did not respond to requests for comment.

The decision to restructure comes after Amplats completed a review aimed to increase long-term competitiveness and sustainability. Rustenburg operations will be reduced to three mines, producing 320-350,000oz of platinum. Four Rustenburg mines, Khuseleka 1 and 2 and Khomanani 1 and 2, which Amplats described as “unsustainable, high-cost shafts”, will be put on life support. Platinum production will decrease by about 400,000oz a year, but Amplats hopes the restructuring plan will deliver R3.8 billion a year and savings of R390 an ounce in reduced overheads. It will affect about 14,000 jobs.

Strikes cost the company 306,000oz of platinum last year which together with market factors contributed to the full-year financial loss to the year end which Amplats expects to announce.

As part of the revival, Amplats also wants to combine its Union North and South shafts before it plans to sell them. In the interim, the less profitable Union North Declines would be closed. (If it’s all a bit hard to follow, Amplats has provided a handy infographic.) The company also suggests its Waterval UG2 Concentrator and No 2 Smelting Furnace will be closed to reduce carbon emissions.

Chris Griffith, CEO of Amplats, said: “The platinum business has attractive underlying fundamentals, but we are facing tough decisions to restore profitability to our operations. We must evolve to align the business with our expectations of the platinum market’s long-term dynamics and address the structural changes that have eroded profitability over time. We have reviewed our business across the entire value chain, building upon the steps taken to improve operational performance in recent years, and will be consulting extensively with our stakeholders in relation to our proposed changes.”

Griffith has acknowledged the chance for new strikes but wants workers to first exhaust due process. Vusi Mabena, executive for stakeholder relations at the Chamber of Mines, told eNews on Tuesday evening he understands the anger workers might have but also called on them to allow Amplats to follow procedures.

Government, however, thinks the company should have consulted it first. “There was never a consultation. They’ve come up with their own plan, finalised their plan and told us,” Mining Minister Susan Shabangu told a news conference on Tuesday. She disputed the idea that the 2012 mining unrest, the largest in decades, was the cause of the restructuring. She suggested that Amplats should have been better prepared to deal with an oversupply of platinum that hurt prices. “Anglo has disappointed this country by contributing to the unemployment of this country, but also by not being the best businesspeople in this country who are able to mine and do business in a sustainable manner,” reported BDlive from Shabangu’s news conference.

Frans Baleni, general secretary of the National Union of Mineworkers, criticised “the proponents of divisions”, a convenient dig at Amcu, which was heavily involved in mining strikes in 2012, for splitting workers. “We continue to make that appeal for workers to reject divisions and stay united to defend jobs. The proponents of divisions are now nowhere to be found when mineworkers are losing their jobs,” he said on Tuesday. “As the NUM we are extremely disturbed by these job losses and we are asking workers to be united to defend their jobs,” Baleni told Reuters.

Amplats says that while 14,000 jobs will be affected, 13,000 of them around Rustenburg, the jobs will be added as the company continues to restructure. Affected employees will receive “a comprehensive package of support”. Those new jobs will be created through internal redeployment, redeployment to other companies, a community housing project, getting workers involved in agri-business, expanding enterprise development arm Zimele, and fuel cell beneficiation.

In a strongly worded statement, the ANC attacked the plan. “In our view this decision is not new and it is disingenuous for Amplats to try to present as a new plan, which will create 14,000 jobs elsewhere. The ANC is not persuaded by this argument and the scant detail provided on the so-called creation of an equivalent number of new jobs suggests to us that we are all being spun a yarn,” said party spokesman Jackson Mthembu in a reaction to what was clearly bad news for the party following what was seen as successful Mangaung conference and January 8 statement.

The party said Amplats was relegating mines to the “dogs” and called on Shabangu to review the company’s license over mothballed mines. Mthembu said “the complete disregard for the plight of workers” shown by Amplats “is not only a travesty but is a disgrace to the industry.” He said the minister should consider revoking Amplats’s license over Khuseleka and Khomanani and auctioning them publicly “to put them to good use”.

The heat around the issue returns the platinum belt to the national agenda only weeks into 2013 and months after workers clashed with police and mine security across the industry. The likely extent of the looming strikes is not yet clear, but it is obvious the battle between and within labour and mine management is far from over, but simply the next installment in what could soon become a central battle over the future and nature of South Africa’s mining industry. DM

Photo: Miners walk at the end of their shift at the Anglo Platinum’s Khuseleka shaft 1 mine in Rustenburg, northwest of Johannesburg, January 15, 2013. Anglo American Platinum, the world’s top platinum producer, said it will mothball two South African mines, sell another, and cut 14,000 jobs. REUTERS/Siphiwe Sibeko