In the eye of the winelands storm: Nosey Pieterse 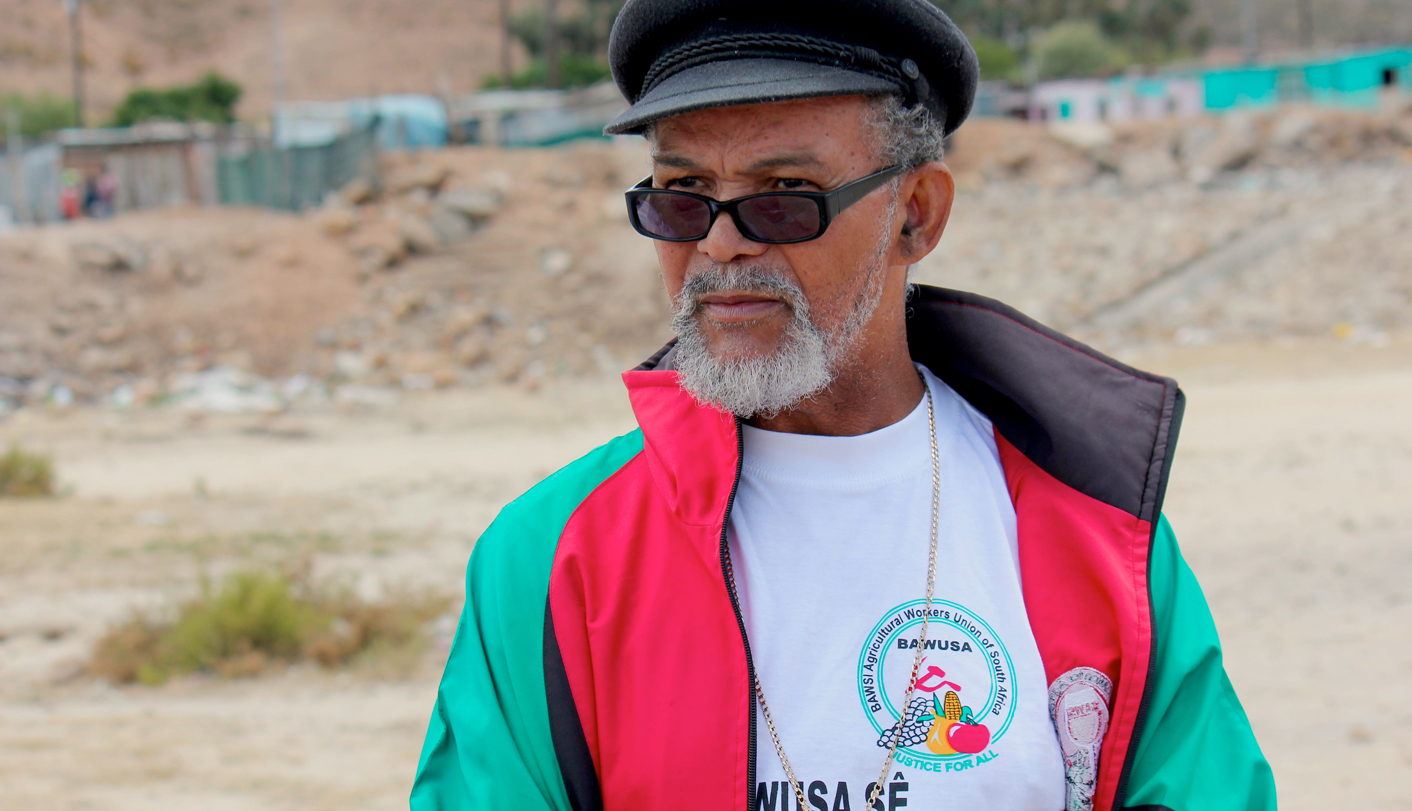 One figure has been central to the De Doorns protests: the president of the Black Association of the Wine and Spirit Industry and general secretary of Bawusa, the Bawsi Agricultural Workers Union of South Africa. Yet Reverend Pieterse is a man with a mixed reputation. REBECCA DAVIS investigated.

Nosey Pieterse has been a seemingly permanent presence at the De Doorns protests since November. When the Daily Maverick spent time in De Doorns last week, NGO sources told us that Pieterse was one of the few figures who commanded the ear and respect of the angry crowd. It was Pieterse who was able to calm the gathered protestors and persuade them that attacking journalists was not in their best interests. We were also instructed to leave De Doorns in a convoy with Pieterse, as it was felt that nobody would obstruct our passage if we were accompanied by him.

By some measures his popularity among farmworkers is easy to understand. Pieterse has been particularly active in intervening in proposed evictions of farmworkers. He has also been instrumental several times in bringing lawsuits intended to improve the lot of farmworkers: one, in 2007, aimed to sue government and the agriculture industry for the high levels of alcoholism among farmworkers, which he attributed to the legacy of the dop system.

Yet in other respects his reputation is much more mixed. A former unionist, who spoke to the Daily Maverick on condition of anonymity, said of Pieterse: “He is words like ‘opportunism’, ‘charlatan’ and ‘Stalinism’ made flesh”. Pieterse is a man of the church who has used his sermons to rage against the “brutal capitalist system”. But he is also the chairman of Bawsi, which, according to its website, aims to correct the fact that historically, “people of colour were not allowed to participate in the agriculture industry as capitalists.”

A column by Tony Weaver in Friday’s Cape Times made reference to the schizophrenia of the two hats Pieterse currently wears for Bawsi and Bawusa: “The two organisations sit uncomfortably alongside one another for good reason: the one, Bawusa, purports to represent farmworkers; the other, Bawsi, promotes the entry of black capitalists into the wine and spirit industry”. To be Nosey Pieterse, concluded Weaver, “must be very confusing”.

Pieterse was able to clear matters up for the Daily Maverick on Sunday. He is the secretary-general of Bawusa, the Bawsi Agricultural Workers Union of South Africa. His involvement with Bawusa began at the beginning of 2012 in a voluntary capacity, and he was ratified as secretary-general of the union at their conference in June. His appointment will stand until the next conference in 2014.

Bawsi, the Black Association of the Wine and Spirit Industry, pre-dated Bawusa by more than a decade: it was formed in 1998 to help transform the wine and spirit industry. “Bawsi realised the need for a union in the agricultural sector that can attend to all the problems of the farmworkers,” Pieterse explained. And so Bawusa was born, around three-and-a-half years ago. Before the farmworkers’ strike, Pieterse said they had between 5 and 6,000 members. “I can’t tell you an exact figure now, but the growth has been phenomenal.”

Pieterse says there is “absolutely no conflict of interests” between Bawsi and Bawusa. Bawsi, he says, is a non-profit organisation which was unable to carry out some of the work of a union – for instance, to represent farmworkers at the CCMA. “There wasn’t a union in the area. Fawu [the Food and Allied Workers Union] had a limited standing in the agricultural sector. The level of organisation was almost non-existent. We realised the establishment of a union was critical.”

Pieterse paints Bawsi and Bawusa as being virtually indistinguishable in term of ideology and intent. Why, then, do we need both Bawsi and Bawusa? “Bawsi doesn’t only serve farmworkers. It also gives help to emerging farmers and entrepreneurs who want assistance with establishing small and medium enterprises,” Pieterse says. “Bawsi can’t fall away because it has a further constituency.”

He doesn’t mention that Bawsi was, at one stage, a very well-funded non-profit organisation indeed, receiving a generous monthly stipend from Sawit, the SA Wine Industry Trust set up in 1999 to support transformation in the wine industry. Until Sawit experienced financial problems in 2007, it was paying Bawsi R200,000 a month for projects like “business development training, capacity building and the development of farm workers and unions”, to quote Pieterse in 2007.

But when proof of these Bawsi projects was demanded, it seemed hard to find. The Financial Mail reported in 2007 that “the only evidence of expenditure its president, former anti-apartheid activist Nosey Pieterse, could provide was a list of eviction cases it was defending and regular marches it organised: ‘Demonstrations cost a lot of money’.”

In order to stay afloat after the loss of the Sawit stipend, Bawsi announced its intentions to sell its shares in Phetogo, the BEE consortium which in 2004 bought a 25,2% stake in KWV. The Financial Mail reported that Bawsi stood to make R56 million profit from the sale, and that not everyone was happy: “[KWV chairman Danie de Wet] fears the R56m profit Pieterse says Bawsi will make from selling its shares will enrich a few close associates, a concern shared by some Bawsi members. ‘We fear he wants to sell those shares for his own benefit,’ says one.”

Pieterse responded by accusing “our enemies in the media and the establishment” of demonising Bawsi, and refused to allow the Financial Mail to see Bawsi’s financial statements.

The Daily Maverick asked Pieterse what happened with the sale of Bawsi’s shares in Phetogo. “Phetogo doesn’t exist anymore,” he explained. “At the time of the unbundling of KWV, Phetogo also unbundled. Bawsi still has shares in KWV, but not through Phetogo, through Whitmore Investments.”

So, to clarify: the anticipated sale of Bawsi’s shares in Phetogo for R56 million profit never happened? “It’s a bit unfair of you to ask me this now,” Pieterse responded [he was driving at the time]. “I can’t remember everything.”

There’s another interesting Phetogo-related tidbit here. When KWV sold a quarter of its shares to the Phetogo consortium in 2004, Cosatu was vocal in their disapproval. “We support BEE, but oppose the enrichment of the few and the over-empowerment of a handful,” Tony Ehrenreich told the the M&G at the time. “They just legitimise the unequal and illegitimate farming practices. No one’s talking about land reform, it’s just ‘we are getting a piece of the action’.”

(The Daily Maverick didn’t receive a response to a request for comment from Ehrenreich on Sunday, but all indications are that Ehrenreich and Pieterse are now comfortable bedfellows. Pieterse described their relationship to the Daily Maverick last week as “terrible twins”.)

Another charge that has been levelled against Pieterse recently is that he participates in a conflict of interests by being the chairman of Lindiwe Wines, a BEE-owned wine label launched in 2003 which was touted at the time as being “a significant new player in the South African wine industry – perhaps the catalyst needed to create new wine heroes and break new ground among non-wine drinking South Africans.”

“What is Lindiwe Wines?” Pieterse asked irritably when the Daily Maverick mentioned it. “It ended many years ago.” And indeed, reports indicate that Lindiwe Wines went bust in 2008: the Financial Mail reported at the time that “Lindiwe Wines hit the wall to the tune of R5m recently (owing R4m to the National Empowerment Fund and R1m to KWV for the wine)”.

The Daily Maverick was intrigued by one further issue. In which church is the Reverend Pieterse ordained? Lutheran, it emerges. “I am a self-supporting parish pastor,” Pieterse said. “I provide my services to the church of God entirely free, to communities in Vredenburg, Saldanha and Atlantis. I don’t draw any salary. I don’t draw any telephone allowance, or transport allowance.”

He paused. “Make sure you write that,” he said. “I don’t get any money from the church.” DM

Photo: Bawusa general secretary Nosey Pieterse was shot in the arm by a police rubber bullet at De Doorns on 8 January 2012 (Kate Stegemann)