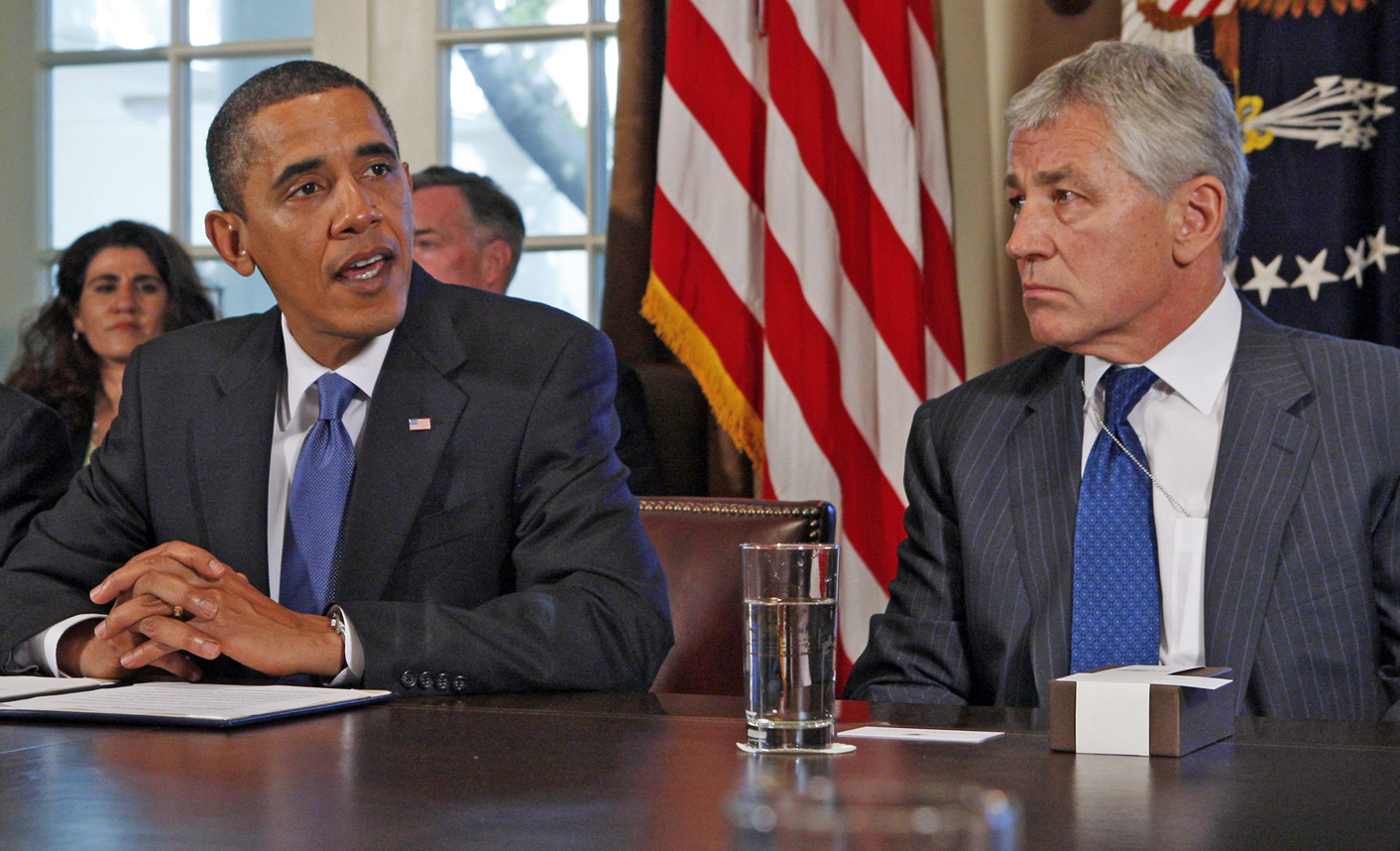 WASHINGTON, Jan 6 - President Barack Obama will nominate former Republican Senator Chuck Hagel to be his defense secretary and an announcement could come on Monday, sources familiar with the nomination process said. By Thomas Ferraro.

The choice will likely set up a confirmation battle in the Senate over whether the former Nebraska senator and Vietnam veteran is a strong enough supporter of key U.S. ally Israel and over his past calls for military cuts.

The Obama administration backed down from a tough Senate confirmation battle over Susan Rice, the U.S. Ambassador to the United Nations, who was Obama’s first pick to replace Hillary Clinton as secretary of state.

Rice withdrew her name from consideration after drawing heavy fire from Republicans for remarks she made in the aftermath of a Sept. 11 attack on the U.S. mission in Benghazi, Libya. Obama then nominated Massachusetts Democratic Senator John Kerry, a former presidential candidate.

“The administration has a lot of work to do on Hagel,” a Democratic Senate aide said on Sunday.

“He is in a weaker position now than Rice ever was because Rice would have rallied Democrats behind her. The administration floated Hagel’s name, then neglected to defend him effectively when his critics started taking shots,” the aide said.

However, the White House is confident it can weather criticism of Hagel’s record and garner enough votes from both sides of the political aisle to get his nomination through committee and win confirmation in the Democratic-led Senate.

“The president wants him, because he trusts him and he’s an independent voice,” a second source close to the situation said.

The source said Hagel had received high-level messages of reassurance in recent days that his nomination was on track despite a campaign by his critics aimed at derailing it.

People close to Hagel have been informed of an imminent announcement, the source added.

Obama is also expected to round out his security team by unveiling his pick for CIA director to replace David Petraeus, the retired general who stepped down in November over an extramarital affair with his biographer.

In recent weeks a number of prominent Republicans have said they would oppose Hagel’s nomination. On Sunday, Republican lawmakers made clear he would face a tough nomination process.

“This is an in-your-face nomination by the president to all of us who are supportive of Israel,” South Carolina Republican Senator Lindsey Graham told CNN’s “State of the Union.”

“I don’t know what his management experience is regarding the Pentagon, little, if any, so I think it’s an incredibly controversial choice.”

Many Republicans contend that Hagel, who left the Senate in 2008, at times opposed Israel’s interests. He voted several times against U.S. sanctions on Iran, and made disparaging remarks about the influence of what he called a “Jewish lobby” in Washington.

Hagel has also been critical of the size of the American military, telling the Financial Times in 2011 that the Defense Department was “bloated” and needed “to be pared down.”

An editorial in The Washington Post last month said that given the scale of the cuts Hagel seeks, he was “not the right choice” for defense secretary.

Senate minority Leader Mitch McConnell said “there would be a lot of tough questions of Senator Hagel.”

“But he will be treated fairly by Republicans in the Senate,” the Kentucky Republican told NBC’s “Meet the Press.”

Hagel has also been attacked by gay rights groups for remarks in 1998 questioning whether an “openly aggressively gay” nominee could be an effective U.S. ambassador. He apologized for the comments last month saying they were “insensitive.”

If confirmed, Hagel would become the first former enlisted soldier to lead the Pentagon. He served alongside his brother Tom in Vietnam, and they earned five Purple Hearts between them.

Senator Heidi Heitkamp, a North Dakota Democrat, said the way Hagel had been targeted was not fair.

“He hasn’t had a chance to speak for himself,” she said on ABC’s “This Week. “Why all the pre-judging, I don’t know.”

Last month Obama offered strong support for Hagel as a possible replacement for Defense Secretary Leon Panetta, who has said he wants to leave early in the second term.

“I’ve served with Chuck Hagel. I know him. He is a patriot. He is somebody who has done extraordinary work both in the United States Senate, somebody who served this country with valor in Vietnam,” Obama told “Meet the Press” on Dec. 30.

Obama and Hagel bonded over their shared opposition to the Iraq War. Obama rose to national prominence through his criticism of the war, while Hagel made himself an isolated figure in the Republican Party by taking a similar position. The pair traveled to Iraq together in 2008.

While Obama may hope that his choice of a Republican to lead the military would be seen as a gesture of bipartisanship, Hagel has been sharply critical of his own party since leaving the Senate in 2009. Last year, Hagel endorsed a Democratic candidate for the Senate in Nebraska.

In 2009, Republican former Vice President Dick Cheney told Newsweek: “Let’s say I believe firmly in Ronald Reagan’s 11th commandment: Thou shalt not speak ill of a fellow Republican. But it’s very hard sometimes to adhere to that where Chuck Hagel is involved.”