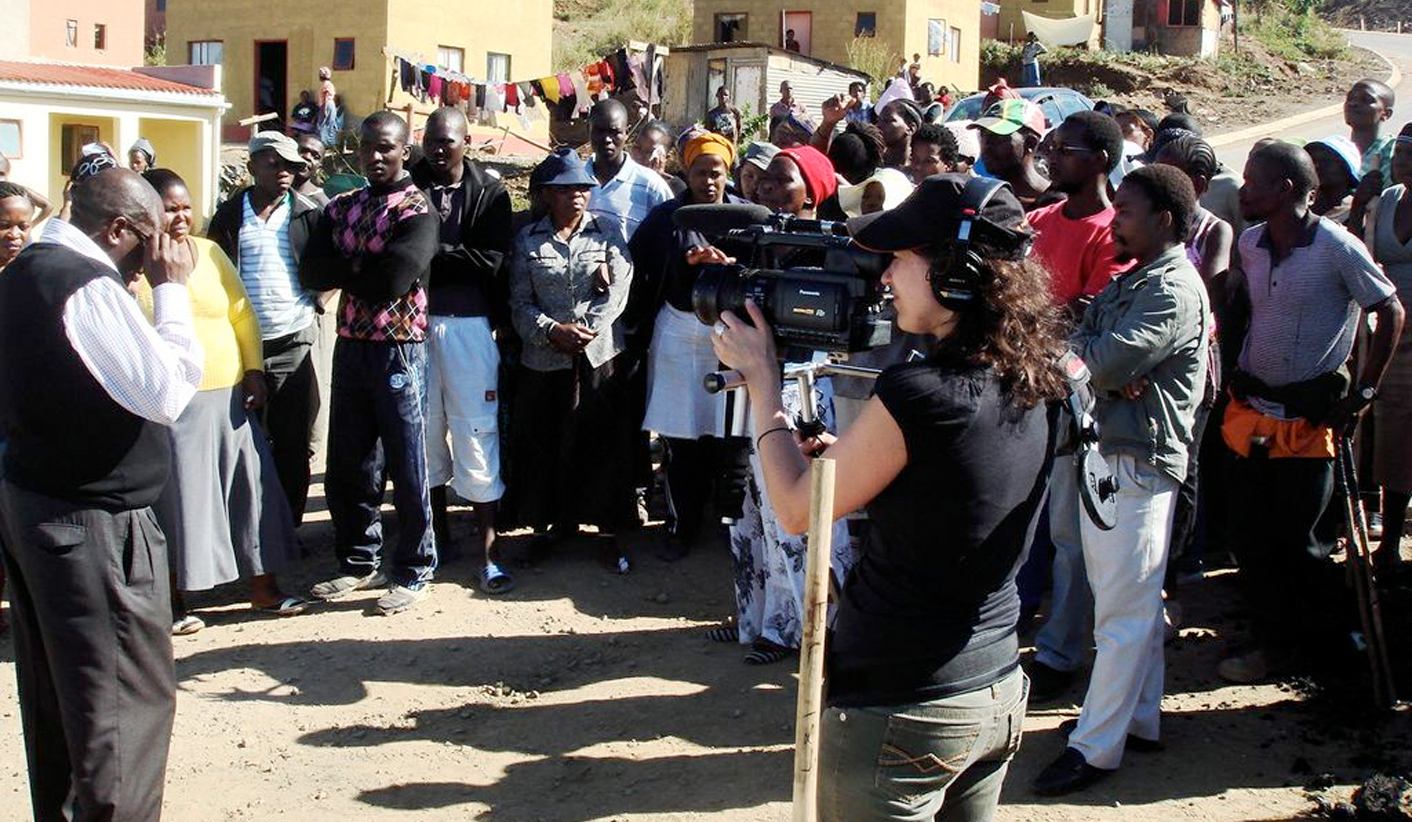 Since its inception in 2005, the housing activist group Abahlali baseMjondolo has been subjected to extraordinary levels of harassment by police and, some believe, the ANC. Dear Mandela, an award-winning documentary being screened in Cape Town and Johannesburg over the next fortnight, tells the story of a grassroots organisation which cannot be ignored. By REBECCA DAVIS.

It is fitting that Dear Mandela begins with footage of police firing rubber bullets at protestors, in the context of Abahlali baseMjondolo’s ongoing attempt to seek redress from the Police Minister for what they term “police repression”. Members of the organisation packed out the Durban High Court last week to see the beginning of a damages claim lawsuit against Nathi Mthethwa. In September 2006, they claim, two of their leaders were en route to a radio debate with the provincial Housing MEC, Mike Mabuyakhulu, when their vehicle was stopped by the police.

When Philani Zungu asked the police why he and Sbu Zikode were being searched, he alleges, a police constable from the Sydenham Police Station told him that “a black man is always a suspect” and began to assault him. The two men were arrested and taken to the police station, where they claim they were assaulted again before being charged with crimen injuria, assaulting a police officer and resisting arrest. The charges were subsequently dropped, but when organisation members met up immediately after the arrests to discuss, police dispersed them with rubber bullets fired at close range, wounding Nodomiso Mke in the leg.

Now Zungu, Zikode and Mke are claiming damages of more than R300,000 from Mthethwa. What Dear Mandela makes clear, however, is that the September 2006 arrests form part of a wider picture which has seen continual attempts to shut down Abahlali baseMjondolo and silence its members. And the documentary also illustrates why this would be the case: because the group gives a powerful, truly democratic, non party-political voice to the grievances of one of South Africa’s most marginalised communities.

Zikode, the president of Abahlali baseMjondolo, features in Dear Mandela, but he is not the focus of the documentary. Rather, the film takes three young residents of Durban’s informal settlements and uses their experiences to tell the story of the shack-dwellers’ rights group. Mnikelo Ndabankulu is the organisation’s spokesperson. Charismatic and articulate, it is Ndabankulu who introduces the film’s leitmotif – an invocation of the legacy of Nelson Mandela, against which the current political and social landscape is unflatteringly contrasted. Ndabankulu thinks Mandela is like Jesus Christ. He wants to meet Mandela to ask him what he thinks about South African society these days. Then there is youth leader Mazwi Nzimande, who is only in Matric but still full of opinions which cut to the heart of the country’s social problems. “Here in South Africa, nobody writes about the poor people,” he says at one point; a situation he hopes to amend after leaving school. Like the others, Nzimande lives in a shack. “I’ve been in Durban for fifteen years but we don’t get to see the harbour,” Nzimande says, matter-of-factly rather than bitterly. “It’s only the bourgeoisie who can go there.”

Lastly, we meet Zama Ndlovu, a young mother who works at a community centre providing daycare for orphans, set up by Abahlali baseMjondolo. Ndlovu points out the location of her last shack, before it was razed to the ground. She lives in constant fear of eviction and the destruction of her dwelling, as do the other two, particularly at the film’s starting point, when the controversial “Slums Act” was introduced in 2007.  The Act made it compulsory for municipalities and land-owners to evict the residents of illegal shacks. The residents would be re-located to “transit camps”.

The three Abahlali members who feature in Dear Mandela spoke of the Richard Farm Transit Camp in Durban – “The Tins”, to give its informal name – with dread. Such camps typically consist of rows of 25 one-room boxes, 25 square metres each, with tin roofs. Often they lack electricity, have only rudimentary communal ablutions areas and are cordoned off with barbed wire, under the control of police or private security. They are also usually further away from shops and business. Three academics, writing to protest against the transit camps in 2009, pointed out: “A life is not improved by relocation from a shack to a distant ‘formal’ structure”.

When Abahlali baseMjondolo was launched in 2005, it was to protest against the sale of a piece of municipal land near the Kennedy Road settlement to local developer. This land had long been promised by the local municipal councillor to shack dwellers for housing. The organisation succeeded in preventing the industrial development of the land. Since then, their ambit has grown much wider. In 2006, they organised a boycott of the local government elections: in the documentary, Ndabankulu is shown writing the words “No Land, No House, No Vote” on his ballot sheet.

Arguably their greatest success, however, was taking the Slums Act to the Constitutional Court in 2009 and having it declared unconstitutional. The unfolding court case forms the backbone of Dear Mandela, though co-director Dara Kell – who made the film alongside Christopher Nizza – explained to the Daily Maverick that they were wary of tracking the case too closely. “We wanted to focus on something with a forward narrative drive, and the court case provided that, but we didn’t want it to be a legal documentary. We wanted to flesh out what life is really like for young people in informal settlements.” Kell and Nizza are based in New York, though Kell is South African. They first heard about Abahlali in 2007, when someone passed on an academic article about the movement. “I immediately thought it was a really interesting development, and not well known outside activist circles,” Kell said. The pair travelled to Durban in 2007 to begin exploring the movement, and over the following years returned a number of times to film. Their footage thus expanded in an organic way.

Abahlali’s greatest victory – the Constitutional Court judgement in its favour – was almost immediately followed by its darkest hour. On 26 September 2009, about 40 people entered the Kennedy Road settlement and attacked a youth meeting of the organisation. The homes of Abahlali leaders were burnt down, and two people were killed in the ensuing conflict. Police, bizarrely, blamed a forum affiliated with Abahlali for the attacks, and 12 Abahlali members were arrested. The case against them collapsed two years later, but the government has continued to ignore calls from the likes of Amnesty International and Noam Chomsky for an independent commission of inquiry into the attacks.

Dear Mandela does not pursue the question of who was responsible for the attacks, though it repeats the claims of Abahlali members that they were organised by the ANC as revenge for the Constitutional Court judgement. Kell explained that the decision not to make this point a focus of the film was motivated by practical reasons as much as anything. “While we were filming, the trial [against the Abahlali members accused of the attacks] was still going on; it dragged on for two years,” she said.

“That storyline was so complex and mysterious that we didn’t want it to take away from the important issues. But we have had lengthy conversations with people who were there, who say the attacks were ordered from a very high level. There is no political will to investigate. But we have to hope that eventually the truth will come out. Personally I think it was a strategy to drain the movement of their resources, through a long court process.”

An article on Abahlali’s website lists all the incidents of violence and intimidation to which the organisation’s members have been subjected. Why is the movement seen as such a threat by police and politicians, when other civil society organisations are not? “I think because they’re not just focused on one silo issue,” responded Kell. “They have a vision of society that is much broader, and they have huge support.” Abahlali terms itself “the largest organisation of the militant poor in post-Apartheid South Africa” – they now claim to have over 20,000 members in more than 30 informal settlements.

“They also can’t be manipulated,” Kell continues. She says something which isn’t in the film is the practice of politicians in the region attempting to buy votes by handing out beer and rice around election time. “They expose a lot of corruption. They’re really uncompromising.”

One of the stand-out scenes of the documentary shows youth leader Mazwi Nzimande addressing a meeting. “Down with COPE!” he cries, and the crowd responds Phantsi! “Down with the IFP!” he yells, and the crowd replies Phantsi! “Down with the ANC!” he shouts, and there is an eerie, awkward silence. Later Nzimande says that he was chastised by his elders for not showing respect. “When you talk about the ANC, you talk about Mandela,” he suggests. “So when you criticise the ANC, it’s like you criticise Nelson Mandela himself.” DM

* Dear Mandela is being screened at the Fugard Theatre in Cape Town on 10th December, and at the Bioscope in Johannesburg between the 14th to the 19th of December.