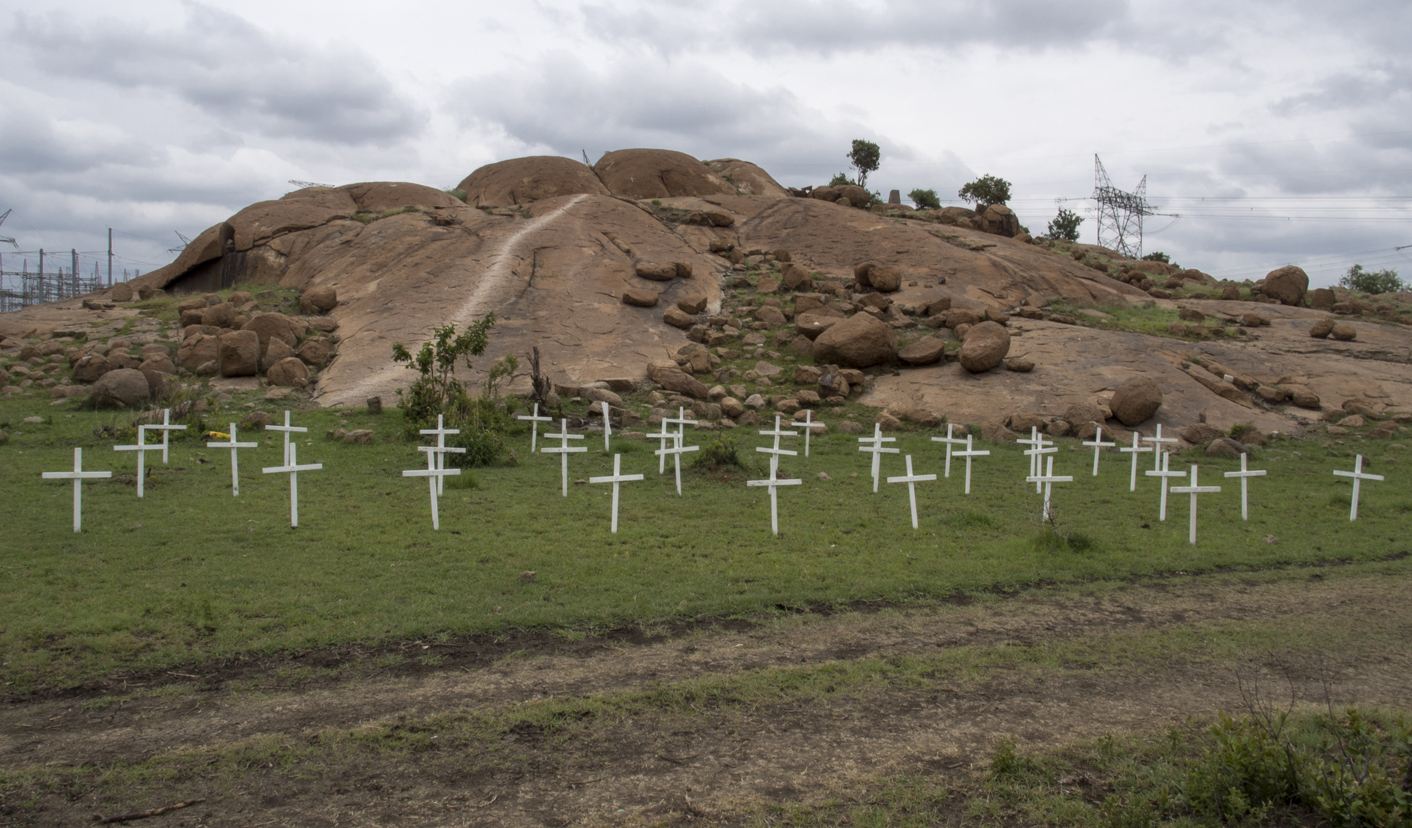 In what is becoming one of the longest testimonies given at the Marikana Commission of Inquiry, AMCU president Joseph Mathunjwa is still being cross-examined by lawyers. He has made some concessions, but has generally been able to fend off the unkind attentions of the police and Lonmin’s representatives. By SIPHO HLONGWANE.

Schalk Burger SC, the lawyer for Lonmin, put it to Joseph Mathunjwa, the president of the Association of Mineworkers and Construction Union (AMCU), that his interventions on 16 August were not a help. He said that they instead jeopardised the situation by driving a wedge between the company Lonmin and the National Union of Mineworkers (NUM), the bargaining partner.

Mathunjwa was being cross-examined at the Marikana Commission of Inquiry, where he is answering for his own conduct in the run-up to the 16 August police massacre that saw 34 people dead and 78 injured. The AMCU president was invited to come and address the workers, even though most of them were not members of his union at the time. NUM and Lonmin were already being blamed by the striking workers for the deaths of several of their colleagues at the hands of the police and two company security guards.

When he was being led in evidence by Tim Bruinders SC, Mathunjwa described his intervention as honest, yet ultimately futile. On Monday, NUM’s Burger challenged him, and described him as an interferer rather than a help.

It was the testimony of the AMCU president that the workers agreed in principle to disarm and disperse if the company agreed to come talk to them, but Burger said that this was not true.

“I put to you that when you told the Commission that you told the workers on that occasion that they must disperse and return to work – that’s false,” Burger said.

Mathunjwa disputed that. But according to Burger, Lonmin was consistent throughout, agreeing to open talks if the workers disarmed and returned to work. These are two fundamentally different versions of what happened between 10 and 16 August, as AMCU says that the company flip-flopped on its positions, forcing it into the awkward position of having to communicate this to the striking miners.

Burger took umbrage at some remarks made by Mathunjwa when he addressed the men on the hill. Since AMCU was not the negotiating union (its figures were too low at the time), he couldn’t have gone to the hill and acted as a negotiator.

However, Mathunjwa said that it was at Lonmin’s request that he came.

“Remember AMCU came at the invitation of your client [Lonmin]. If your client knew that AMCU was not the bargaining agent, why then did they invite us? That was our best as a responsible union called in by the employer. It seems today I am being crucified by you for coming to help diffuse the situation. If I didn’t go, I would also be blamed,” a visibly upset Mathunjwa said.

The AMCU president made two visits to the koppie area on the 16th; however, there is apparently no available recording of the second one. This was where he promised to represent the workers before Lonmin and fight for their R12,500 net pay that they wanted. Burger contended that this was wrong, as the union was not a bargaining partner.

“We were not in a boardroom there, we were not in an office,” Mathunjwa replied. “There was no legal representative there on my side. It was not an academic environment. All I wanted was to get the trust of the protestors.”

Videos of the first meeting show a distressed Mathunjwa begging the armed workers to disperse. He later told the Commission that he was certain that the police would employ brute force to get their way that day.

Photo: The miners of Lonmin erected 36 crosses at Thaba, or the Koppie. to represent the 34 miners killed by police on August 16th, 2012, and the other two crosses represent the two parents who died on hearing of their sons’ deaths in the massacre. Marikana, North West Province, South Africa, Dec 1, 2012. (Greg Marinovich)