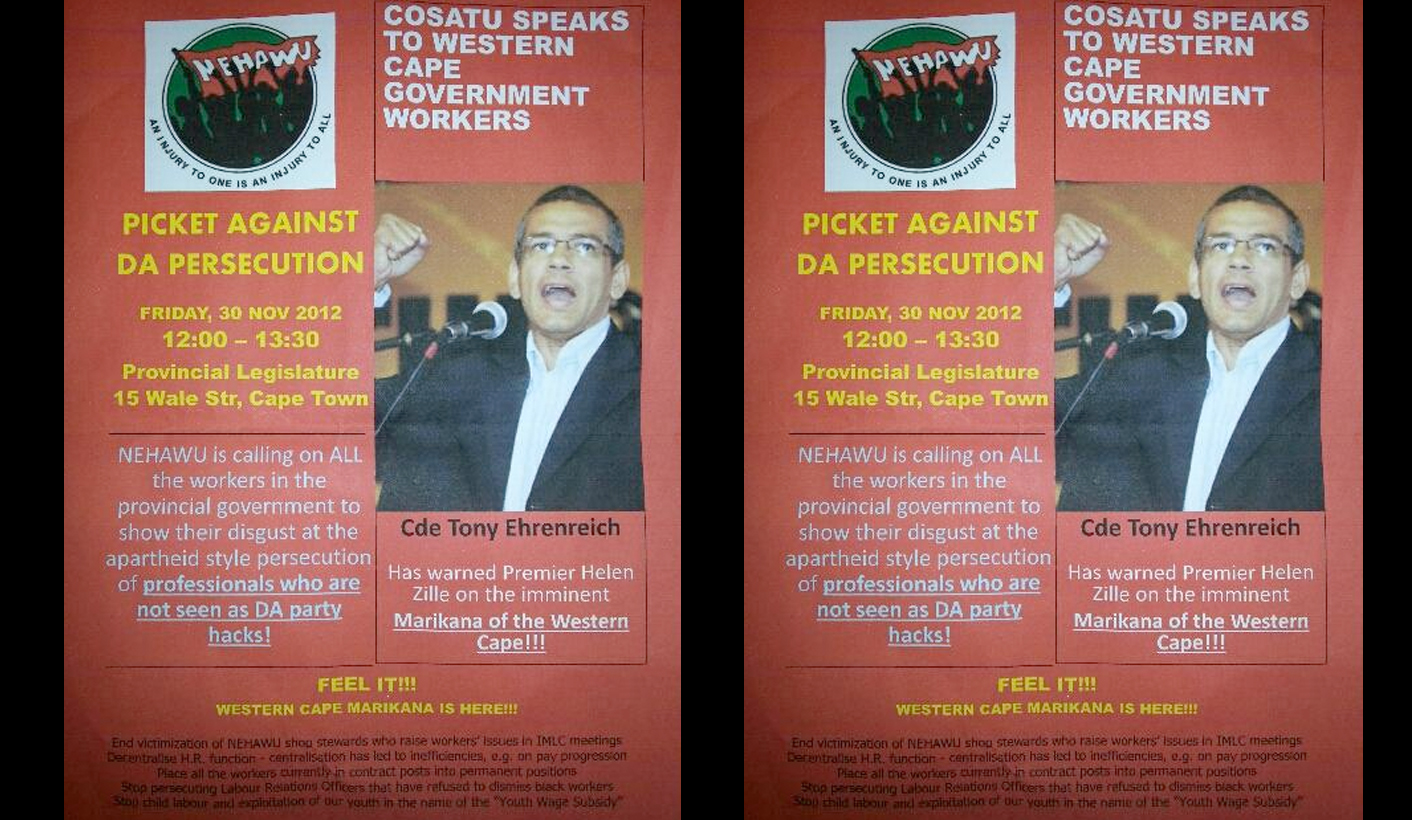 The Western Cape labour conflict is being contested in more arenas than merely the farmlands. It’s descending into a war of words, too, with the DA laying a charge of incitement to violence against Cosatu Western Cape Secretary Tony Ehrenreich, after the distribution of Nehawu’s contentious poster. By REBECCA DAVIS.

The staff of Cape Town Central Police Station must know the drill by now. Politicians march in, trailed by journalists, and announce they wish to lay a charge of incitement to violence. It first happened last Wednesday, when ANC provincial secretary Songezo Mjongile, provincial legislature chief whip Pierre Uys and Boland party chair Pat Marran trotted in to file lay a charge of incitement against Western Cape Premier Helen Zille. Zille, they said, had agitated the violence in the winelands through her behaviour on Twitter.

The police officer taking down the statement asked what proof they had. Mjongile produced a bundle of pages and said they contained a record of Zille’s tweets on the subject of the winelands protests. Among the tweets they singled out as problematic was her suggestion on 14 November that “Reports coming that a farmer has died after being assaulted in Wellington. Grave risk of retaliation. Zuma must bring in SADF.” Zille shortly afterwards tweeted casting doubt on whether this was true, and then again later the same day retracted the claim, but ANC Provincial Secretary Songezo Mjongile said the damage had been done. Mjongile alleged that farmers had mobilised on Facebook as a result of Zille’s claims, leading to the assault of farmworkers.

Zille called the charge against her a “publicity stunt”. But apparently a lot can change in a week, because the DA has now laid its own charges of incitement against Cosatu provincial secretary Tony Ehrenreich, on the basis of a pamphlet being circulated around Cape Town.

The DA must have had to do some thorough testing of the authenticity of the pamphlet, because during the current labour unrest they have already been caught out once leaping on a document which turned out to be false – the fake ANC flyer purporting to offer workers money for participating in protests. The ANC, you might recall, then claimed that the DA themselves had made it, in another bizarre round of their political ping-pong.

But this time round, it seems that the pamphlet is indeed legitimate – and it has nothing to do with farmworkers. It bears the logo of the National Education, Health and Allied Workers’ Union (Nehawu) and features a picture of Western Cape Cosatu leader Tony Ehrenreich raising his fist while addressing a crowd. “Cosatu speaks to Western Cape government workers,” runs the heading, and beneath that is a call to government workers to “picket against DA persecution” by joining a protest on Friday 30 November outside the Provincial Legislature.

“Nehawu is calling on ALL the workers in the provincial government to show their disgust at the apartheid style persecution of professionals who are not seen as DA party hacks!” it reads. Under the photo of Ehrenreich, it reminds the reader: “Cde Tony Ehrenreich has warned Premier Helen Zille on the imminent Marikana of the Western Cape!!!”

At the bottom, in capital letters, it concludes: “FEEL IT!!! WESTERN CAPE MARIKANA IS HERE!!!”

It is the latter phrasing that has caused outrage. Since “Feel it” was one of the World Cup catchphrases, the exhortation seems to try to yoke the excitement of 2010 to the horror of the Marikana miners’ strike, in which over 40 people died. Nick Clelland, the Western Cape government’s director of strategic communication, tweeted in response to the pamphlet: “What sort of nasty mind conflates the joy of the World Cup with Marikana?”

And so DA Western Cape leader Ivan Meyer duly arrived at the Barrack Street police station on Thursday afternoon to lay charges of incitement to violence against Tony Ehrenreich, in his capacity as Cosatu provincial secretary. “Cosatu is using the symbolism and violence of Marikana to promote its public gatherings,” the DA announced. The pamphlet, said the DA, “resonates with Mr Ehrenreich’s highly inflammatory remark earlier this month when he said ‘Marikana is coming to the farms in the Western Cape’.”

According to reports, Ehrenreich allegedly made the statement on 7 November during meetings in De Doorns, when he said that “the ill treatment and under-payment of workers by some farmers must stop, otherwise we will see a Marikana in De Doorns”. This statement seems substantially different in tone and meaning – a warning rather than an exhortation – to that of the offending Nehawu posters, but the DA sees the two as amounting to much the same thing.

The Daily Maverick asked Nehawu provincial secretary Luthando Logcinisa if the posters were authentic. Yes, he said. He explained that they grew out of a frustration on the part of the union that the provincial government was refusing to engage with them on “a number of issues we are unhappy about”. Among these, he cited the case of 50 Nehawu members in the Department of Social Development who are being made to re-apply for their jobs two years after being appointed, because “they were informed that the process that they had undergone was done incorrectly.” Logcinisa said: “We said, there is no way that two years later you can ask people to re-apply for their jobs.”

The DA’s Western Cape media manager, Liza Albrecht, responded to this by calling the claim “confused”, telling the Daily Maverick that “the Social Development Department is restructuring and modernising its organogram in order to best serve the public.”

Another issue worrying Nehawu, Logcinisa said, was “the rate at which Nehawu shop stewards are being targeted” within provincial government. If the union’s shop stewards speak out, he claimed, they end up “getting charged with something”. (The DA said it did not see “any substance” to this claim.)  Logcinisa also alleged that there had been a “systematic purging” of people of colour from senior management positions.

In response to this claim, Albrecht sent the Daily Maverick statistics to show that the workforce profile statistics for the Western Cape government’s four upper occupation levels (Top Management, Senior Management, Professionally Qualified and Skilled Technical) indicate that 77.7% (39, 276 of 50, 521) “fall within the designated ‘black’ group”.

Regardless of Nehawu’s claims, however, what about the issue of whether it was appropriate to reference Marikana in publicising a government picket? “What we were saying was that the employer, the provincial government, has come up with innovative ways of suppressing dissent,” Logcinisa said. But why link the picket to an event where many people died? “No, what we were saying is not about dying,” he said. “It’s about defiance. We are going to defy their unlawfulness. The DA claims to uphold the laws, but they flout them whenever they feel like it.”

He said also that Tony Ehrenreich was not involved with the production of the posters – that they were solely a Nehawu initiative.

The DA’s Albrecht told the Daily Maverick that the issue of whether Ehrenreich had actually had a role in the poster production was moot, in that the charge had been laid against him in his capacity as provincial secretary of Cosatu. “Nehawu is an affiliate of Cosatu and therefore Cosatu and Ehrenreich are responsible,” she said.

“It must be clear that the issue here is the glorifying of Marikana even as grieving families mourn those who lost their lives in that tragedy,” Albrecht said. “These Nehawu claims are so broad and baseless that it confuses the issue, which is the inciteful language in the poster.”

There has been a dangerously loose use of language from many quarters during the Western Cape labour dispute. Premier Helen Zille was also strongly criticised by refugee rights groups for citing unrest between Basotho and Zimbabweans as a contributor to the issue, with groups like People Against Suffering, Oppression and Poverty (Passop) saying the citing of xenophobic tensions could become a self-fulfilling prophecy. In calling the people of the Western Cape to merrily rally around Marikana in order to picket the provincial legislature, however, Nehawu has surely overstepped the mark, any mark. DM