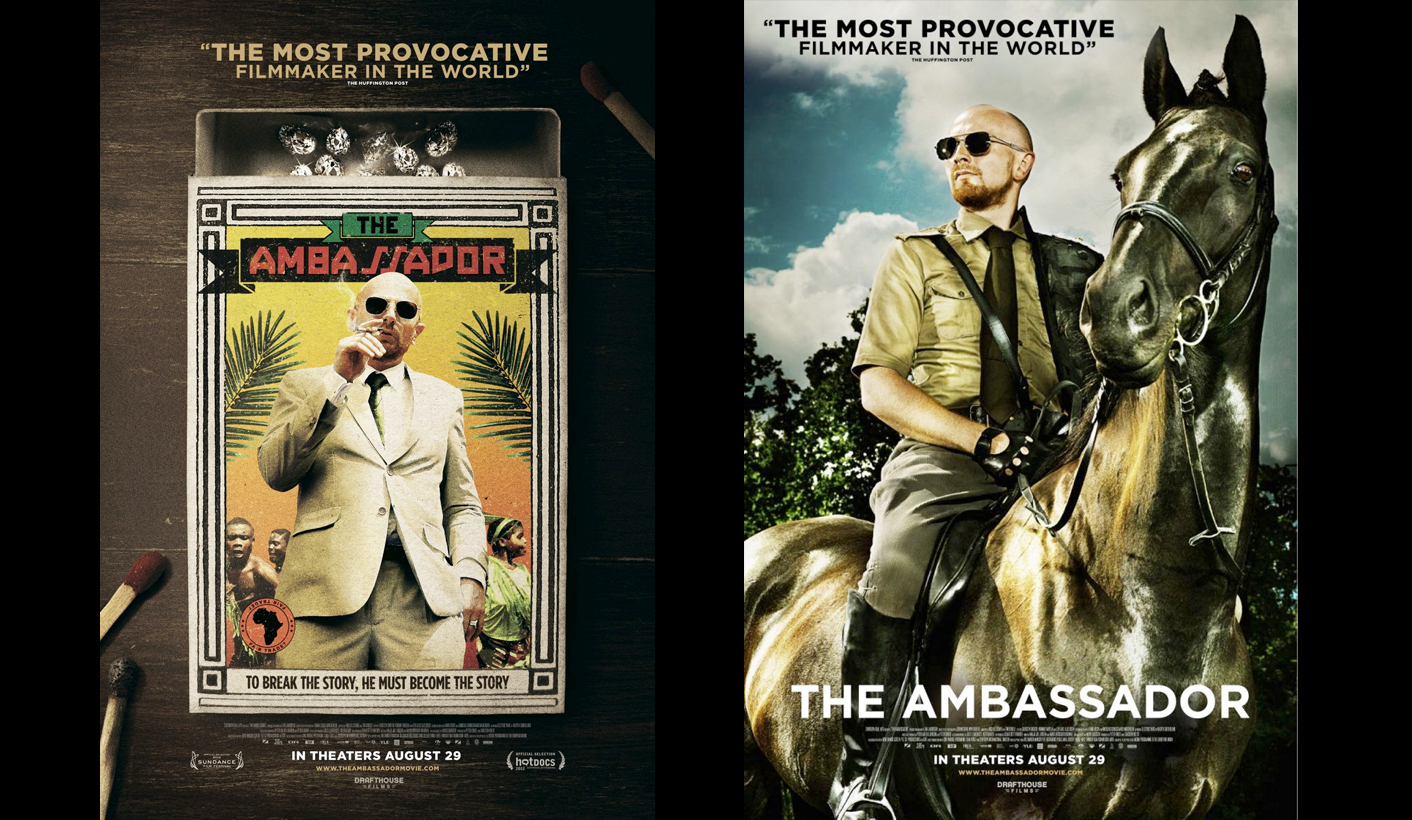 What happens when a mad Danish journalist is set loose on blood diamonds, a pair of pygmies (they always come pairs) and Africa’s most dysfunctional country? The Ambassador happens, a riveting documentary film that occupies the hitherto unexplored space between hard-hitting investigative journalism and Borat-esque farce. By SIMON ALLISON.

The world that matters is divided into three, according to Willem Tijssen, one of the many odious characters that Danish journalist Mads Brugger introduces us to in his bizarre, disturbing and frequently hilarious documentary The Ambassador. “You have the underworld, the criminals; you have the upper world, where we live, the business people; and the back world, the people who are very influential, who actually most of the time pull the strings.”

The Ambassador takes place completely in this “back world”, and it is a truly horrifying place. Brugger has given up his reporting job and has instead decided to embark on a new career: diamond dealing. To do this, he buys himself a Liberian diplomatic passport from Tijssenfor $135,000 (yes, you can do that) and sets off to become the Liberian ambassador to the Central African Republic, a country he describes as “a magnet for white men with hidden agendas”.

Brugger’s agenda is more hidden than most. Every meeting is recorded with hidden cameras, and each step of the process explained in his thick Danish accent. The documentary, not the diamonds, is the point of the project (We never do find out what becomes of the diamonds he eventually procures. Maybe they pay for it all – this could not have been a cheap film to make.)

Brugger hams it up for the audience that only he knows is there, parading around the Central African countryside in knee-high leather boots and chain-smoking through a long, 1920s-style cigarette holder. Occasionally, there are shades of Borat. He hires two pygmy assistants – because, he’s told, “pygmies always come in pairs” – and frequently makes outrageous statements to his staff who have no choice but to agree: “Paul, it’s not to be racist but I have a problem with Asian people. They are always sneaky, and very greedy, and difficult to trust.” Paul nods sagely in response.

Sometimes, the unwitting staff outdo Brugger. Paul, the fixer, describes how Adolf Hitler slept on pillows made entirely from the pubic hair of his girlfriends. “Hitler is very funny,” he concludes, to general agreement.

Despite the absurdity, the glimpse that The Ambassador provides into the inner workings of the Central African Republic and the vultures which surround it is very serious indeed. Every government official  Brugger meets is greeted as a matter of course with an “envelope of friendship”, up to and including the son of President Francois Bozize. The president’s son doesn’t handle the bribe himself, however; this might make him “feel dirty”, poor boy.

Almost the entire diplomatic establishment in the country is running diamond scams on the side, most prominently the consuls of Italy and India, both of whom are a font of useful advice as Brugger bumbles his way into his own scam. This is corruption on an international scale, and it is not even much of a secret; it doesn’t take much for Brugger to get people to open up.

Then there’s Monsieur Girard, the owner of the diamond mine up north with whom Brugger eventually signs a very dodgy contract. Girard is small, plump man with a shiny gold tooth; the gold might even be his, as he owns a gold mine too. Brugger goes up north to visit the mine briefly, flown up by an overly-cheerful young pilot who is, of course, from South Africa; there had to be a South African involved somewhere in a sordid story like this. The mine is about as primitive as it gets. Brugger doesn’t really describe the working conditions, but it’s not hard to imagine that they are atrocious; this is the norm in the Central African Republic.

The Ambassador is a good movie. It’s funny, it’s absorbing, it’s enlightening and it’s true. It’s also dangerous, as far as perceptions of Africa are concerned. The Central African Republic is one of the worst-governed countries on the continent, and the most corrupt; it is hardly representative of Africa as a whole. Yet, Brugger is not shy to make sweeping generalisations. “I want to go beyond all moral boundaries, to experience the red carpet treatment with a suitcase of diamonds,” he says. “I want to be an African diplomat.”

So, enjoy this documentary. Laugh at it. Learn from it. But remember that it’s a very targeted exposition of a very specific problem; it is not the definition of a continent. DM

Photo: Two posters for The Ambassador.