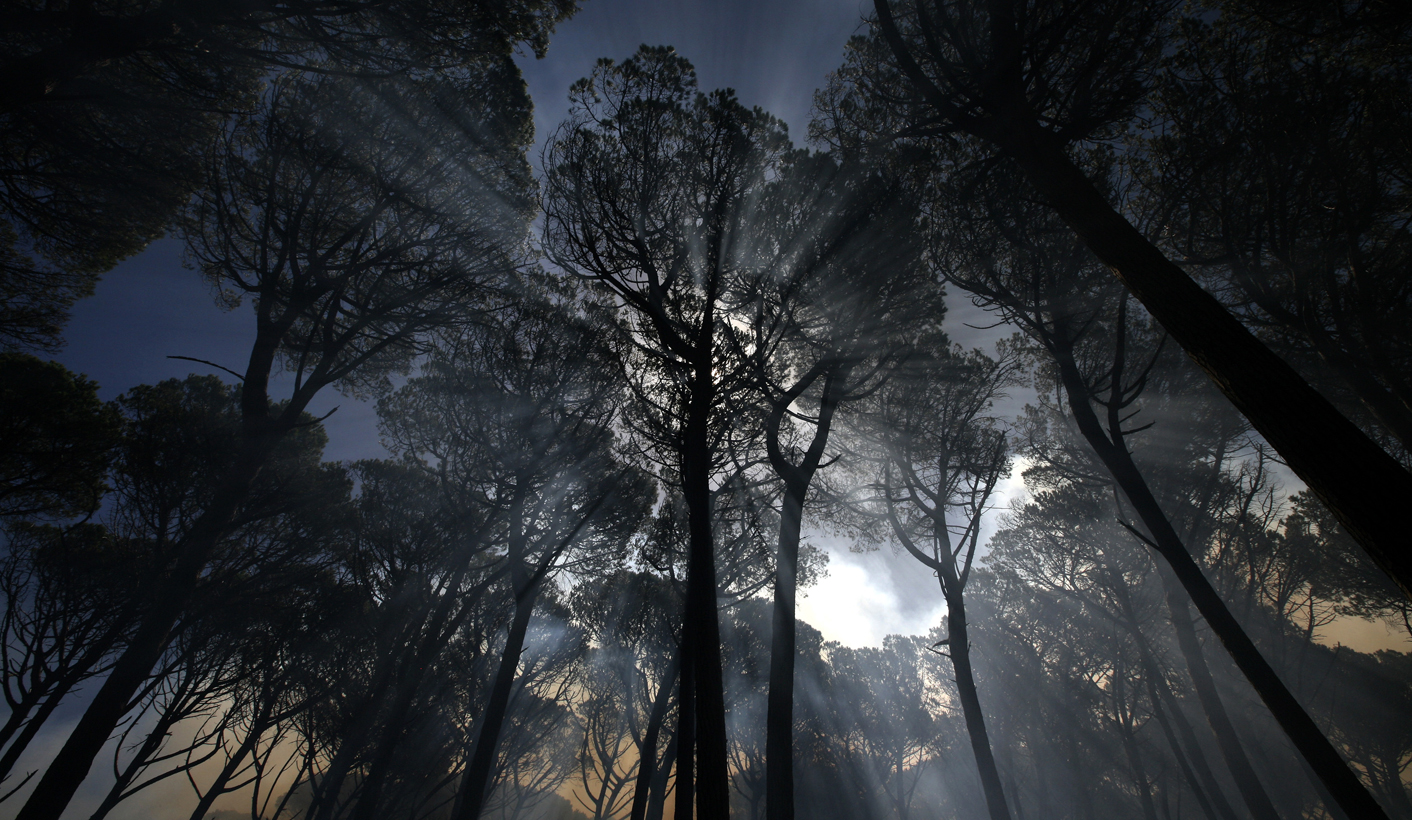 South Africa has seen miners’ strikes, the Marikana massacre, vineyards set ablaze in Western Cape farm strikes, and now timber industry experts warn that protests, strikes and violence could beset the sector where the stakes are high, and the working conditions are desperate. By MANDY DE WAAL.

Warning bells are ringing for the forestry industry,with labour experts and forestry insiders saying that this could be the next local sector to suffer protests and strikes, if not violence and asset destruction, unless the worker issues are addressed. Forestry researcher and social assessment specialist Jeanette Clarke recently warned the timber industry that events at Marikana illustrated the potentially disastrous consequences of ignoring ongoing violations  of workers’ basic needs and rights.

“Realise it or not, the forestry industry is exposed to a high level of risk as a result of the degrading and unsustainable labour practices that have become the norm since the advent of labour outsourcing,” Clarke wrote in industry journal, SA Forestry Magazine. “Adequate measures to address this risk are long overdue and the spectre of Marikana will continue to haunt the industry until substantive progress is made to improve working conditions for all forestry workers,” she stated.

In an interview with Daily Maverick, Clarke says she’s been calling for some kind of industry code in the forestry sector for years. “There is a sectorial determination, as there is with farmworkers, but it is a minimum set of standards and it is a very low wage because the minimums set for forestry is even lower than agriculture. But it is a safety net and one would not really expect massive multinational companies, where CEOs earn tens of millions, to be paying their forestry workers R1,400 a month.”

Clarke warns that labour instability, coupled with poor worker conditions in the industry, could put timber assets at risk. “The big thing with forests is that they burn, and there are all these fires in the industry. But we have no figures so we don’t know what percentage of these are as a result of actual labour unrest or worker dissatisfaction, but you can be sure that a proportion of them are. It is difficult for forest workers to organise because they are very scattered,” she added.

“If there is widespread labour unrest and such poor working conditions, obviously as an industry you are putting yourself at risk because it is very easy to burn down a plantation, and that is a huge investment because depending on the trees, plantations can grow from seven to 15 years. That is a massive investment, more so than an agricultural crop, which is an annual crop,” Clarke says.

Author and labour expert Terry Bell recently wrote that despite government claims to the contrary, working conditions in the forestry sector are worse today than they were under Apartheid.

“Conditions have worsened in the past decade as outsourcing of labour became widespread. Today, among the 17 large forestry operations in South Africa, 82% of the workforce of 36,025 are employed ‘on contract’, supplied by labour brokers. A further 5% — 1,843 workers — are employed on fixed term contracts by the companies. Only 4,774 have permanent jobs and the benefits that go with this,” Bell stated.

Wally Menne of Timberwatch (a network of NGOs that acts as a watchdog for the negative impact industrial tree plantations have on people and the environment) has spent decades watching the shifts in the local forestry sector, changes which have had disastrous consequences for local labour.

“In the 80’s, private companies in the timber industry started systematically retrenching workers and outsourcing their work to contract workers. It was happening in the 80’s on a large scale. Every time a company like Sappi bought a private farm where there was existing labourers, who often had well established accommodation and facilities provided by the farmers, Sappi would immediately retrench all the workers and give them three months’ [worth of] wages as a kind of once-off compensation. These same workers were often forced to move from where they had been born, or grown up.”

Like many other sectors, three decades ago the timber industry woke up to the benefits of outsourcing and realised that shedding permanent staff in favour of contract workers or labour brokers brought massive financial benefit.

“The large players are all big multinational corporations like Sappi and Mondi, and they affected corporate restructuring in the 80’s and 90’s to cut costs by outsourcing to smaller businesses or labour brokers. Sometimes these outsourced partners are genuine businesses and service providers, but on the other end of the spectrum there are the labour brokers,” explains Clarke, who has been in the industry for over 15 years.

Before the big outsourcing push, workers had union membership, better working conditions together with a 13th cheque, pension fund and other benefits. But workers were retrenched and replaced with contract labour, while in other cases workers were merely reemployed as contractors. “These workers are paid just enough in terms of the minimum wage, which is about 60% of what full time workers who are unionised forestry workers are getting,” Clarke says.

In the forestry sector, labour outsourcing (which can constitute as much as 80% of the labour force of some of the bigger companies) created a situation where companies no longer invested in, or developed, communities. “It is quite similar to what has happened at farms. There was a major shift to labour brokers and outsourcing, which ended a lot of the subsidies that employers used to put into worker accommodation, schools, feeding programmes and the many other things that used to be done. Yes, this may have been a paternalistic kind of system, but the end result is that for forestry workers things have really gotten worse,” she adds.

Formerly, timber companies or farmers created forestry villages with kitchens that provided food; there were clinics, schools, crèches and recreational facilities – a wide range of services that have been shed with the outsourcing of labour.

Clarke explains that this amounted to a huge benefit in addition to wages, which workers no longer have. Clarke believes this additional value could be as much as R3,500 a month. “This is three times what the lowest wage earners in the sector get, and [it] is very significant for the most vulnerable people to lose that amount of  benefit,” she says.

Another unfortunate side effect of the outsourcing is that people were often forced off forests, plantations and farms that they were born on. “Many workers returned to tribal areas and rural areas in the so-called homelands, but this in turn caused conflict because people wanted space to live, build houses, raise cattle and do subsistence farming, but there just wasn’t space available,” Menne tells Daily Maverick, adding that some timber companies expanded into the former homelands through “out-grower” schemes.

“This mean that even less land was available for subsistence farming, and added to pressures. These schemes also had a severe negative impact on water resources in what were quite marginal areas, because the best and high rainfall areas were ‘white land’ in the old South Africa. Most of the areas that were allocated to the homelands were land that was quite marginal, in dryer areas and with poorer soil.”

Menne says people in these marginalised areas were then forced to sell their labour back to companies in the timber industry for a fraction of the real worth of that labour. “The situation hasn’t gotten much better today. It’s the old story that it is a buyer’s market and that the industry has to be competitive with countries like Brazil, India and China, where timber is grown on a competitive basis, mostly for export to Europe or Japan,” he says.

“The argument is that the industry can only afford to pay the bare minimum for labour, but it is a contradictory statement because they certainly don’t restrict themselves to the bare minimum when it comes to rewarding their Chief Executive officers,” Menne adds.

During the 2010/2011 financial year, Sappi’s CEO, Ralph Boëttger, was remunerated with $1,958,289, which included his salary, bonuses, expenses and contributions. By way of contrast, the minimum wage for forestry workers as set out by the Department of Agriculture and Forestry is R 1,428.70. The minimum wage for farm workers is R1,503.90.

“In the forestry industry, workers toil in conditions where they are exposed to the elements, and are often contracted by sub-contractors or re-contractors. One contractor might get a R5-million labour contract which he skims R500,000 off, and then passes this down to another contractor, who does the same,” Menne says, explaining that the contract may land in the hands of a smaller or emerging contractor who does the job for R3 million by undercutting labour costs.

“The whole idea of outsourcing is that you make more money, while limiting your responsibility. You pass the responsibility on to the worker, the labour broker or the sub-contractor. It is a ticking time bomb. Labour has been exploited by the timber industry in a worse way than it has in agriculture. Farm workers are also generally poorly paid, but they seem to get more value in terms of other benefits. If they work on a dairy, there will be a ration of milk or food, for example. Sometimes individual farmers do treat their workers better than contractors who are just employed for a month or two or a couple of days and then gotten shot of,” says Menne.

With the forestry industry becoming evermore mechanised, work is also becoming increasingly scarce. Many bigger companies have converted from manual labour to employing sophisticated equipment that replaces workers. Much of the logging, stripping of bark and loading of timber is now done by heavy machinery. This means there is less work in the industry and a greater demand for jobs, and this creates competition in the labour force which drives down wages.

And so the perfect storm is brewing in the timber industry. One where labour conditions are deteriorating; worker benefits have been eroded; jobs are getting scarce; multinational bosses sit offshore and get paid millions; business assets (forests) are incredibly valuable; and equally flammable – it is a powder keg waiting for a spark. DM