Boks running more scared than ever 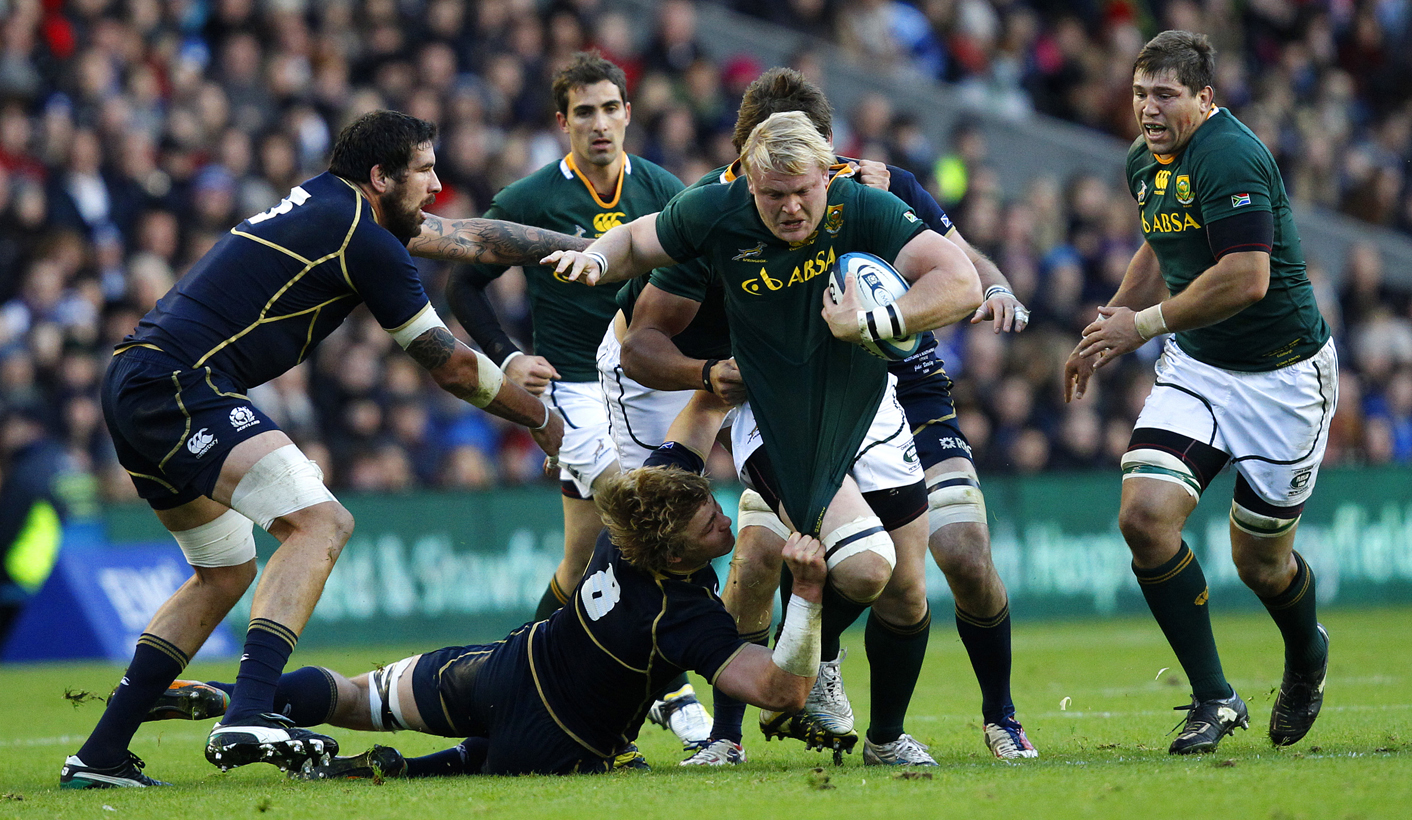 Coach Heyneke Meyer has, by constantly stressing how tight Test rugby is, steeped his transitional team in the paralysing fear of defeat. Now he must imbue the team with the confidence required to play with the sort of flair and imagination guaranteed to stretch winning margins… and provide entertaining rugby. By KEN BORLAND.

It was a win and it may have been an improvement on the last two visits to Edinburgh, but the Springboks’ 21-10 victory over Scotland left more feelings of disappointment than elation.

The sad truth is that South Africa’s attacking play seems to have regressed even more. Having done what was required in the first half in terms of building a foundation, the Springboks scored early in the second half to open up a 21-3 lead.

The Scots looked ready to be put to the sword. With the admirable forwards having done their job, bashing the hosts into submission, the time was surely right to open up and allow the backline to ram home the advantage, score some tries and give the Springboks a handsome victory befitting the team ranked second in the world.

But the backs fluffed their lines. All confidence with ball in hand has drained away from them and, when the chance to open up did arrive, they seemed over-anxious, snatched at opportunities and a rush of basic errors allowed Scotland back into the game.

Coach Heyneke Meyer has constantly stressed how tight Test rugby is, how narrow the margins are, how one mistake can lead to defeat. Which is mostly true, but in emphasising the negative, in ensuring his transitional side understand how easy it is to lose, he has drummed the positive out of them and they seem to have no idea how to win a game, how to well and truly put the opposition away. They are scared to try anything in case it leads to a mistake, heaven forbid.

There has seldom been an international side that has looked so imbalanced in terms of where their strengths lie.

While Meyer has followed conventional wisdom in terms of South African perceived rugby’s strengths and is building a formidable pack that is growing more impressive with every outing, backline play seems to be totally neglected.

It is hard to remember even one backline move. Wings JP Pietersen and Francois Hougaard barely had the ball in their hands, and, even after the final hooter had gone and the Springboks could not lose, they decided to kick a penalty out and end the game rather than have a go!

The dreadful second half undid all the good work of the first 40 minutes, much as the second half against Ireland made up for the awful first half.

Pat Lambie would have convinced few that he has the kicking game to control a Test from flyhalf and many of the Springboks’ problems in the second half were due to his inability to blast clearing kicks back out of their own half.

That being said, the decision-making was largely left to Ruan Pienaar at scrumhalf, who was solid without setting the world alight. Pienaar had the ball in his hands 56 times, but Lambie only handled on 25 occasions, running just twice and kicking 12 times.

The Springbok ball-carriers, especially Willem Alberts, were effective and there were promising signs in the first half as even the backline took the ball flat and the Scots were struggling to plug the gaps created by front-foot ball.

The rolling maul was also a potent weapon for the Springboks, the first of hooker Adriaan Strauss’s two tries coming from one. The visitors should really have had two tries from the maul, though, as the first one was identical to the second one but was inexplicably denied by the referee, George Clancy.

Strauss did not have any family in the opposition this weekend, but it did not affect the determination of Sunday’s birthday boy. He contributed to a strong scrummaging performance, South Africa’s lineout touched perfection with a 12/12 success rate and Strauss was all over the field to harry and block the opposition. He did superbly in the 46th minute to intercept Scotland scrumhalf Mike Blair’s pass and scoot away from 40m to score his second try and give the Springboks a commanding lead they failed to add to.

The loose trio of Alberts, Francois Louw and Duane Vermeulen continues to impress. Alberts was everywhere, tackling strongly, softening the Scottish defence with his bullocking runs, but also showing a lovely sidestep and a good turn of pace to spark the counter-attack that led to Strauss’s second try.

Louw made an astonishing 17 tackles and won two crucial turnovers, as well as carrying the ball well to deservedly win the man of the match award, while Vermeulen and lock Eben Etzebeth were also strong on defence.

Of the backs, Zane Kirchner continues to provide a solid last line of defence, while wing JP Pietersen also spent the whole match tackling his heart out. There was precious little opportunity for him to shine on attack, while Juan de Jongh could also only show glimpses of his abilities with a couple of darts through the half-gap.

To progress as a team, the Springboks are really going to have to use their backs more. DM