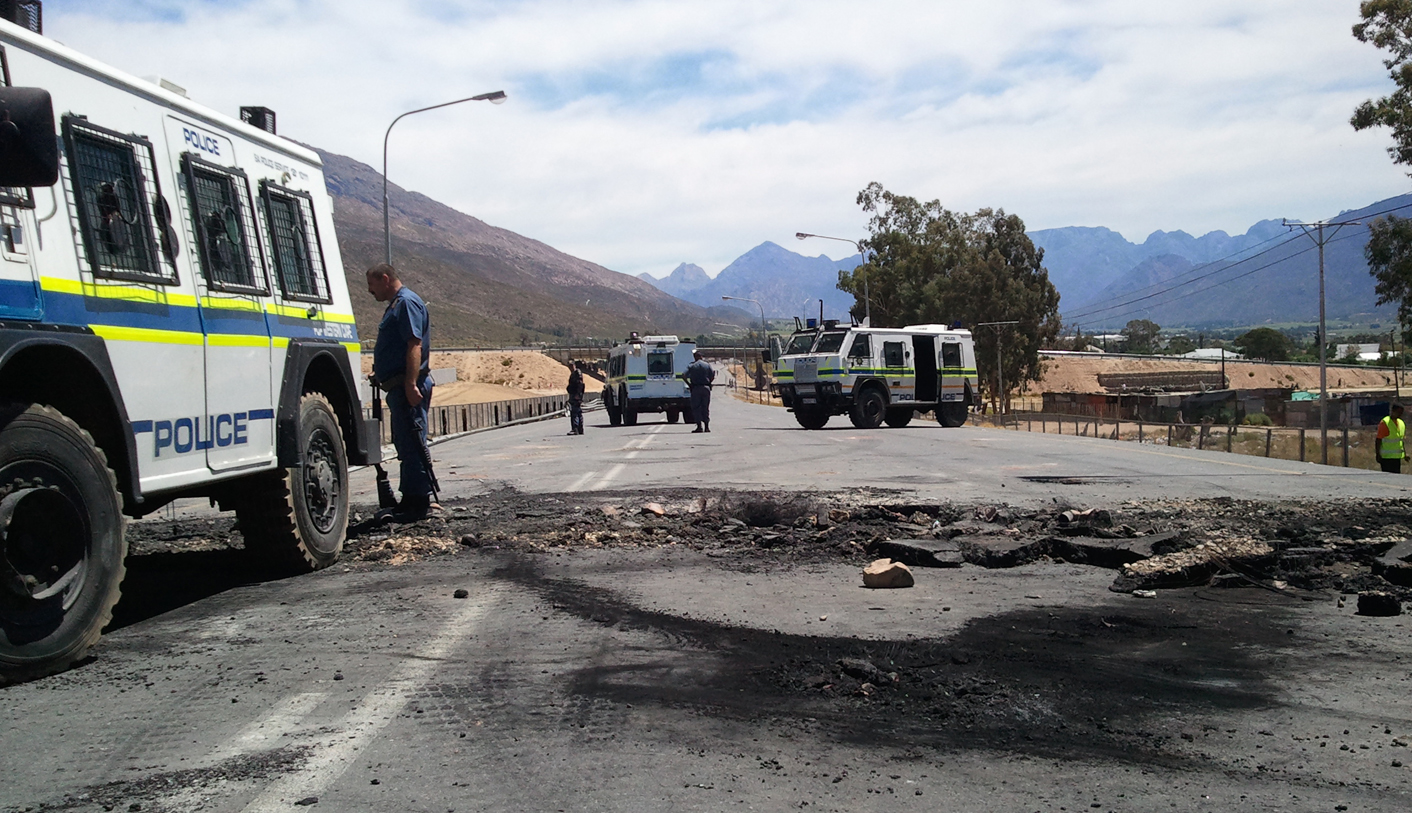 Driving through the Hex River Valley after Wednesday’s chaotic protests feels like entering a ghost town. Yet when one manages to find residents and speak to them, it becomes crystal clear that the farm workers are planning to hold out for their wage demands – and that few of them know anything of the well-publicised promises that they would be back at work this week. By JARED SACKS.

Entering the Hex River Valley on Thursday morning was a surreal experience. Following Cosatu’s well publicised statement on Wednesday, I had expected that most farmworkers would already be in the fields trying to recuperate their lost wages over the past two weeks.

Yet driving past the luscious green vineyards on the way to De Doorns, it felt as if I was entering a valley in which all its residents had simply disappeared. It was eerie yet beautiful at the same time – a cross between a typical horror film set in a rural back country and a The Truman Show-like Arcadia.

And then, as I approached the tiny dorp of De Doorns, I was assaulted with images of police armoured Nyalas, remnants of burning tyres and debris from the night before, a building destroyed by fire and people of all ages walking around or lazying about as if it were a Sunday.

Rocking up at the town’s only Shoprite U-Save, I waited for a contact. As the effective commercial centre of De Doorns, Shoprite has become the meeting place for almost all its residents (though not the more privileged white population, which doesn’t seem to have or need a similar rendezvous point).

I began to speak randomly to people as they walked out of shops or sheltered themeselves from the oppressive sun on the stoop. A friendly lady who was with her young child began talking to me about her support of the strike. She lives on one of the surrounding grape farms but told me that R60 is too low a salary – that they were continuing their strike until they got their demand of R150. While she had positive things to say about Cosatu, she was not aware that Cosatu had triumphantly announced the end of the strike the previous day.

Cutting out the verbosity and politicking, the Cosatu statement went something like this:

The agreement between government and Labour suspends strike for 2 weeks, and workers will return to work tomorrow, Thursday 15 November 2012.

The agreement negotiated between Labour and Government has been accepted by the workers and the strike will be suspended for 2 weeks. The terms of the agreement are as follows:

Key to their statement, and a similar statement by the Building and Allied Workers Union of South Africa (Bawusa), was that in spite of their admission that farmworkers spontaneously went on strike in about 16 Western Cape towns, an amorphous body called “Labour” had suspended the strike with the agreement of the strikers themselves.

Why then would this woman know nothing about Cosatu’s announcement that all farmworkers would go back to work immediately?

It is not over

Talking to more people in and around Shoprite, I noticed that all of them were somehow economically connected to the strike. A group of taxi owners and drivers, for instance, explained that since most of the community was on strike, they were without customers. Still, they support the strike because a raise for the farmworkers would mean more customers in the long-run. One taxi driver remarked that they had to support the strike because they are “part of the same community”. While they felt Cosatu was fighting for their rights as a community, this group was ambivalent about the announcement that the strike was over.

Another striker I found nearby, nicknamed Forest, said he would strike for as long as it took to get R150 per day. He said he hadn’t seen Cosatu for a while and didn’t know about the announcement, though he assured me that not even Cosatu could get him to suspend his strike.

I then connected with a strike leader named Monwabisi who brought me to his community of Ekuphumuleli. Driving there, we had to use an alternate route as the direct road was being blocked by police. He explained that even though the minimum wage is R70 per day, many farmers illegally pay their farmworkers as little as R60.

On the farm where he works, Keurboschkloof, they get paid relatively more than other farmworkers in De Doorns. He noted that it was also the only farm where workers had joined the Food and Allied Workers Union (Fawu), a Cosatu affiliate. But he explained why Cosatu and other unions had such little involvement in the strike: “The people, most of them don’t know unions. Or the farmers dismiss you if you want to join the unions”.

While he supports Fawu and Cosatu and is willing to suspend the strike, he also said that farmworkers don’t trust Bawusa, Cosatu or the government in general and that they would not stop striking. Monwabisi reserved the biggest criticism for Bawusa, which he claimed is helping labour brokers bring in temporary workers to break the strike (see also here).

Walking around the township of Ekuphumuleli and the shack settlement of Stofland, areas that were packed with people through the day, I spoke to many more strikers. Few of them were even aware of the Cosatu declaration. When asked what they thought about it, not a single one hesitated when saying that the strike would continue until their demand of a R150 per day wage was met.

Phumla, a young lady working for R60 per day, detailed some shocking mistreatment by farmers who would confiscate asylum papers of foreign nationals from Lesotho and Zimbabwe (thereby making them more vulnerable to deportation). She said she would not “go back to R80” and was confident that they would win the R150 per day. Petros, and elder Sotho man who was born in De Doorns and owes R2,335.43 on his water account, said that he was striking so that he would eventually be able to pay off his bills. Right now he says he packs 100 pallets of grapes everyday from 6am to 6pm but only gets paid R65 for the backbreaking work. With dust blowing all over us, I met with Mthobeka and her friends in New Stofland (the new RDP section of Stofland). She works for R70 per day from 6am to 7pm and is also unwilling to suspend her strike: It is “too long to wait for two weeks” she said about the Cosatu agreement.

In the afternoon, community members made their way down to the football pitch where they hold their mass meetings. At first, there were very few people there and, since Monwabisi was implying that COSATU had organised the meeting, it was looking like a complete flop.

Then, once the meeting started, and despite COSATU’s no-show, residents came streaming down from Stofland and an hour later there were well over one thousand people in attendance. The meeting was lively, with at least thirty different speakers making a variety of impassioned pleas to the community. Topics ranged from (a) deciding to continue the strike for R150 per day, (b) statements of support from various other sectors including security guards who claimed solidarity by only working three days this month, and (c) discussing strategies for preventing strike breakers being brought into De Doorns by labour brokers. The latter is a huge issue for strikers and is the primary reasons for their general hatred of BAWUSA.

Despite it being clear that xenophobia is a major problem in the area, the meeting, mirroring the strike as a whole, has created a sense of commonality amongst Xhosa, Coloured, Sotho and Zimbabwean residents who all seem to be defying COSATU and remaining on strike. Zimbabweans I spoke to were concerned about fellow nationals who live on the farms and did go back to work that day. However, xenophobic tensions did seem to be at a low point because of the large number of Zimbabweans who remained on strike.

Tapiwa Mukwacha, a young Zimbabwean who is involved with the Movement for Democratic Change back home, has been one of the most active organisers during this strike. He was the most critical person I met that day. To him, BAWUSA and COSATU have betrayed the workers. Even more worrying, by trying to stop the strike, they’ve actually made it more violent.

It remains to be seen whether farmworkers in De Doorns and in a dozen or so other towns are able to sustain their strike and push farmers and government closer towards the R150 per day goal. Right now, however, the poor of De Doorns, at least, remain defiant.

They have rejected the political grandstanding of ANC and DA politicians. While they are quite sympathetic to COSATU, they have made quite clear that they will not be bullied into submitting to a suspension of the strike.

In Marikana, the National Union of Mineworkers refused to support worker’s wage demands, resulting in a rebellion by NUM members both against their bosses as well as against their own union. Will farmworkers on strike likewise lose faith in COSATU Western Cape if the latter continues to insist that the strike must be suspended?

I spoke with Jesaja Louw, an organiser with FAWU. Apparently he, too, was not consulted by COSATU and, shockingly, remained unaware that the strike was ordered suspended. Contrary to strongly worded statements by COSATU officials, he was adamant that FAWU and COSATU would support the workers if they decided to continue the strike.

When discussing Manguang, Jesaja alluded to huge political divisions within COSATU. Such divisions become apparent in the contradictions between his view that FAWU and COSATU must follow the farmworker’s mandate as opposed to his superiors who are quite clearly ordering the strikers around.

How similar is this to the miners strikes in the North West? Possibly naively, Jesaja expressed sympathy for the Marikana strikers but was adamant that NUM never betrayed or shot at the strikers; that it was merely propaganda peddled because elections are around the corner.

When push comes to shove, will Jesaja support the farmworkers on strike? Or will he fall back on the official COSATU line and eventually vilify the strikers in the name of protecting ANC interests? DM