Stilettos and sashes: Life’s a drag at Cape Town pageant 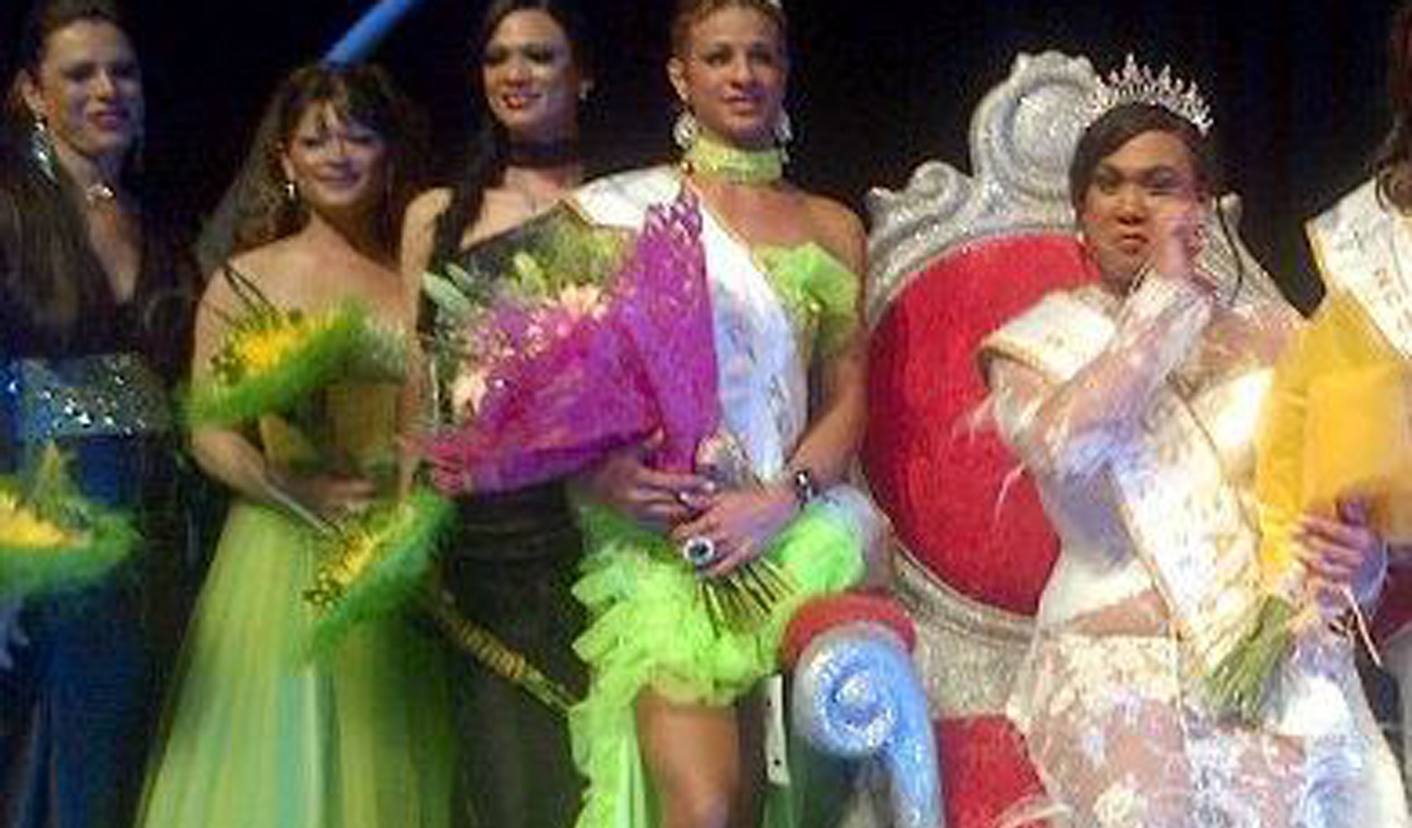 The queues for women’s toilets are always longer than for men’s, but this was particularly the case at the Cape Town International Convention Centre Saturday night, when scores of unusually tall, immaculately-coiffed and thickly made-up figures patiently stood in line for their turn at the mirror. The occasion was South Africa’s largest drag pageant, Miss Gay Western Cape. By REBECCA DAVIS.

If you thought “Miss Gay Western Cape” should, logically, be a title awarded to a lesbian, you thought wrong. The contestants are drag queens – or, if you prefer, “female impersonators”. These are not individuals who have had a sex-change, although their female verisimilitude is often stunning. In fact, transgendered individuals are not eligible to enter. This caused a right kerfuffle back in 2010, when it emerged that one of the finalists had begun hormone treatments in the process of transitioning to female from male.

That is contrary to the whole spirit of a drag pageant, which is very much about performance. Drag queens are customarily referred to as “she” when in costume, but the rest of the time maintain firm male identities. “The pronoun switch is a way of acknowledging that the female identity is in some way an alter ego,” explained Bianca Camminga, a doctoral fellow at University of Cape Town. “Most drag queens are at pains to establish that they are not transgendered, and neither do they want to be women.”

The Miss Gay Western Cape pageant has a venerable pedigree. The event dates back far into the dark mists of the Apartheid years, though its recorded history is far shorter. That’s because the pageant initially had to take place in secrecy, hidden from the view of Apartheid authorities. In the democratic era it underwent a seven-year dormancy before being revamped and re-launched in 2009 by director Mark Donough. The event has since grown progressively in scale and stature, probably aided by novelist Lauren Beukes’ award-winning documentary on the 2010 pageant, Glitterboys and Ganglands. This year provided the ultimate illustration of the fact that the event has come of age, at least by some measures: its old home at a community hall in Athlone was swapped for the corporate swank of the Cape Town International Convention Centre.

The pageant might be a thoroughly entertaining spectacle, but the build-up is no joke. Contestants win entry to the finals by performing strongly in previous, smaller pageants. This year’s winner, Zilin Ayoki Zhang, secured her place in the final by claiming the Miss Gay Ambassador title earlier this year. When the finalists are selected, they begin a solid month’s worth of rehearsals leading up to the big night, including an intensive series of interviews with the judges. In the meantime, the all-important costumes must be perfected: finalists model swimwear, themed attire and ball gowns.

The Desmond Tutu HIV Foundation’s Ben Brown served as a judge for the pageant in 2009 and 2010, because the pageant has a strong HIV-awareness bent to it. “It was one of the most stressful things I have ever done,” Brown told Daily Maverick. “All the contestants are so committed and inspiring, and when you learn the stories about their lives it adds another layer of meaning which makes it really hard to pick a winner.”

This year saw 16 finalists take to the stage, almost all from the Cape Flats. Age, apparently, ain’t nothing but a number when it comes to female impersonators: the oldest contestant, “Ashley Heiden”, clocked in at 42. The youngest finalist was 22 years Heiden’s junior. Drag queens are known for their exotic, witty stage names, but this year’s crop of contestants disappointed in this regard, with the possible exception of “Vicky Beckham”, 21. Each finalist is allocated a number, and as the pageant progresses, the crowd makes their support clear with yells of endorsement: “Number two! Number two!”

The pageant draws an extremely diverse audience: while some in attendance on Saturday were non-competing drag queens, they sat shoulder-to-shoulder with whole families, turned out in their Sunday best. Brown said that for many, it is a celebratory family occasion: “You find aunties and grandmothers and mothers all coming out to support their sons,” he said. “It’s a space which crosses racial and religious divides.” At one point during Saturday’s event, a man wearing a Muslim keffiyeh became so carried away with enthusiasm for a drag act that he leapt onstage to dance with the performer.

Saturday’s event had a feeling of good-natured chaos, with a loudspeaker blowing out 10 minutes into proceedings. As the evening took a distinctly boozy turn for the audience, the bar closed (to the vocal dissatisfaction of some) due to fears that wineglasses would be smashed all over the CTICC auditorium. The event began at 20:30 and the winner was crowned almost five hours later, so little wonder that some were distinctly tipsy by the event’s end (including this writer). But this was all beside the point. The featured drag acts were wonderfully good fun, there was an appearance by a bona fide celebrity (sort of – Latrice Royale, a previous contestant on US reality show Ru Paul’s Drag Race), and everyone cheered their hearts out for their favourite finalists.

For the winner, 30-year-old Zilin Ayoki Zhang (whose name is remarkably similar to the Chinese woman named Miss World in 2007) from Mitchell’s Plain, it was a case of third time lucky. Zhang seemed to be an audience favourite from the start, but really sewed things up during the question and answer session. Drag queens, it emerges, answer beauty pageant Q&As with exactly the same kind of platitudes as their female counterparts, with frequent references to God and being the best you that you can be. Zhang was a cut above, however, with an inspiring story of being the first family member ever to attend university.

Zhang took up drag only four years ago, having been inspired by going to watch the pageant in 2009. “I was hooked immediately,” he told Daily Maverick. “It becomes easier when you have a mentor, or a ‘drag mama’, as we call them. I was fortunate enough to find one.”

Zhang has an intriguing approach to drag: he compares it, and his relationship with it, to a sport. When Daily Maverick phoned him the day after his victory, he was hard at work – preparing lesson plans for his students. Zhang is a teacher. “Tomorrow its back to work, and the kids are writing exams at the moment,” he explained. He said some of his colleagues came to support him at the pageant. “On a professional level some of them probably have reservations,” he admitted. “I haven’t told all of them about the result, but I guess we’ll see tomorrow.”

Zhang said his family was initially “a bit apprehensive”, but only because they weren’t quite sure what it all meant. “They thought only gay men drag, they didn’t realise the art of drag is open to anyone. Once they experienced it, they became quite okay with it.” Zhang doesn’t identify as either gay or straight. “I’m just being me,” he said. “Drag is lots of hard work, and you have to have a thick skin. People might not like your eye shadow, or your dress. You need to just be comfortable with who you are.”

Drag is generally reserved for weekends, but now that Zhang has won his title, his drag queen persona will probably be in demand for some mid-week functions as well. “I want to do a lot of work around HIV and Aids awareness, as well as general awareness within the LGBTI community about issues like hate crimes,” Zhang said. “Miss Gay Western Cape is supposed to be a role model for the LGBTI community but I would like to take it further and be a role model in general.” Brown confirmed that the winner of the pageant can have a genuine impact. “The event has great significance to the community,” he said.

One of the headline sponsors of this year’s pageant was the Western Cape tabloid the Daily Voice, a sign of just how accepted the contest has begun. While the fun played out at the CTICC on Saturday, however, terribly different events were unfolding in another part of Cape Town. In Phillipi, yet another lesbian was murdered: Sihle Skotshi, 19, was set upon by a group of five males when leaving a club and stabbed to death. She died in hospital. The executive director of community organisation Luleki Sizwe, Ndumie Funda, reported that her last words were: “Please apologise for me to my mother, and I love you all.”

If only the spirit of warmth and liberalism that characterises the Miss Gay Western Cape pageant extended more generally. DM