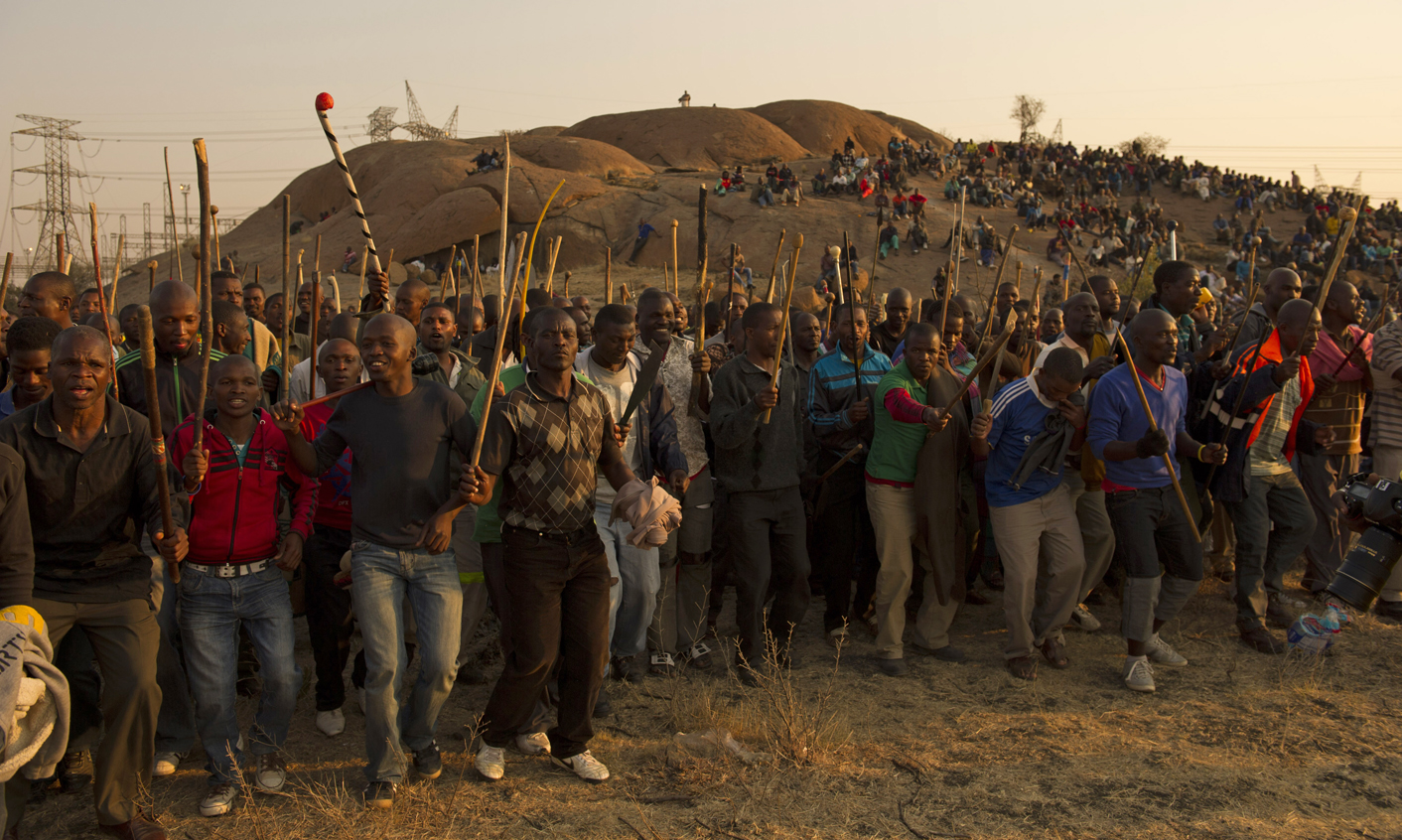 On Thursday the police continued to recount their version of events up to 16 August: negotiations appeared futile in a climate of violence, muti and murder, and they were prepared for the worst. But since when was it left to the SAPS to make wage deals – and where were the unions and Lonmin management? By GREG NICOLSON.

In his testimony at the Farlam Commission of Inquiry into the Marikana massacre, Lieutenant Colonel Duncan Scott described the morning before the miners were shot by police. With broad shoulders, a crew cut and double-breasted navy blazer, he is the official narrator of police operations that day. It is Scott who has to give the SAPS version of how they came to shooting dead 34 striking mineworkers and wounding 78 others.

He took to the stage after Lieutenant Colonel Victor Visser went hour-by-hour through the events leading up to 16 August. Depending on how you look at it, it was the few days leading up to the Marikana Massacre that either provoked or justified the choice to use live ammunition on the striking workers.

Two police officers were hacked to death on Monday, 13 August. Hours earlier another officer was recorded telling mineworkers that the SAPS has not come to arrest them; they’re only there for the knobkerries, pangas, spears and other weapons. By this stage, around half a dozen people had already been killed in the wage strikes at the world’s third-largest platinum producer.

Rather than disperse and hand over their weapons, the striking workers overpowered two policemen and stole their guns. Other officers tried helplessly from a helicopter to save their colleagues, but were two late. Members of the tactical response team fired live ammunition at the attackers but they escaped. Visser suggested that those who stole the R5 assault rifles later used them in an ATM robbery in Wonderkop.

He presented images of the dead cops. One had his head cut open while the other was so wounded he was unrecognizable. Therapists had to be brought in to work with police who had lost their colleagues.

It was just one example he gave on how the mineworkers were bent on violence. Visser insisted that the SAPS response to the chaos revolved around finding a peaceful solution, even after the two policemen were killed. As part of a six-stage plan to deal with the problem, the first was to engage in dialogue.

The SAPS negotiation team went to the main koppie in a Nyala and were able to talk to five leaders through Lonmin’s interpreter (who must have been preferable to using their own interpreter or having a trained negotiator who could actually speak the right language). Every time they spoke, the mineworkers said they didn’t want the police; they wanted management to discuss a wage deal. Once, the workers let them have access to the dead body of a supervisor. Another time, the cops said they were told they would all die and none of the Nyalas will leave Marikana.

Both SAPS speakers were frustrated that they got into the situation in the first place. “Police were forced into labour negotiations instead of law and order,” said Visser. Lonmin had refused to meet with any of the workers until they discarded their weapons and returned to work. The National Union of Mineworkers (NUM) and Association of Mineworkers and Construction Union (Amcu) both struggled to have an influence, despite workers being more receptive to Amcu.

Video footage was also shown of groups of naked men standing in semi-circles being sprinkled with what’s thought to be muti. Later a video shows the mineworkers, crouched with their weapons, as again they are sprinkled with a liquid. It’s thought that the mineworkers may have hired an inyanga to protect them, and Visser read from news reports claiming that the miners thought they were invincible because of their magic.

Stories about muti have been around since the massacre, with different interpretations. There’s the idea that the mineworkers were hell-bent on violence because they thought they couldn’t be penetrated by bullets. The reports have also received criticism for trying to portray miners as such to reduce their agency as logical actors and justify the killings. Then there was also the idea that the muti was another type of provocation: the police wanted to show the miners a bullet could tear through them, regardless of what a sangoma or inyanga had given them.

But Visser’s message was clear: this was no ordinary strike and the situation was extremely dangerous.

That brought the police narrative to the morning of 16 August, where Lieutenant Colonel Scott took over. He testified that the police met at 6:00 on the Thursday for a situation briefing. The miners were still armed and dangerous, crime intelligence said, but the police were ready for stage two of the plan. Stage one focused on negotiating a peaceful settlement to the strike. Stage two still focused on negotiation but with an added “show of force”, specifically having barbed wire ready to roll out.

There were 630 officers to be deployed. Police were expecting to hear from Amcu, whose leader said the miners would lay down their arms that morning, but the cops were ready. Negotiators, the public order policing team, the national intervention unit, the tactical response team, the K-9 unit and officers on horses would be deployed, to be assisted by choppers in the air.

The plan was to get negotiators to the mountain then put north-to-south lines of Nyalas in a semi circle between the informal settlement and the main koppie. Behind the Nyalas would be the Tactical Response Team ready to show force if the other units had been attacked or lives were at risk. Special Task Force officers and the National Intervention Unit were stationed both south and north of the koppie. Police had grid maps and could communicate with officers in the air, said Scott, but the plan was an ideal and not necessarily the reality.

When the police moved into position, it seemed clear their negotiations had failed. The workers once again told them they only want to speak to Lonmin managers and the deadline by which Amcu had promised the protestors would disarm had come and gone with no word from the union. Scott played a video that showed the “more organised” group of workers, whom he suspected were the same ones taking muti, marching in a tight group past the police right up to the last Nyala, singing and carrying their weapons. The majority of workers, however, simply watched quietly from the mountain.

Meanwhile, North West Provincial Police Commissioner Zukiswa Mbombo was giving a media briefing. She said the miners were acting illegally and after 10 deaths the situation couldn’t be tolerated any longer. She sternly warned them to submit their weapons as the police act to ensure peace and stability. Her words will come under scrutiny if she’s brought to the commission to be cross-examined.

Just before he described the killings, Scott’s testimony was stopped by Judge Ian Farlam. The inquiry will continue Friday with the police describing the minutes to how the killings unfolded. The testimonies of Visser and Scott offer the police version of events, but the legal teams will later call on other officers directly involved to testify under oath.

But if you’re looking for a quick resolution there’s some good news: the commission decided Thursday it would be split into two phases. The first will assess whether the SAPS are criminally liable for the deaths, asking what happened and who is legally responsible. The second phase will deal with the moral and social implications of 13 to 16 August. Police Advocate Ishmael Semenya had argued against the split, saying it would prejudice the police by singling them out. Advocate Matthew Chaskalson, evidence leader for the commission, said the split would enable pressing issues to be dealt with sooner. In making his decision, Farlam said he cannot yet say whether findings can be made after the first phase. DM

Photo: Lonmin employees gather on a hill called Wonderkop at Marikana, outside Rustenburg in the North West Province of South Africa August 15. The miners are calling for the minimum wage to be lifted from its current R4,000 a month to R12,500. The men are mostly Xhosa and Pondo speaking, and the strike was initiated by the drillers. (Greg Marinovich)