Polokwane and Mangaung: Shades of difference 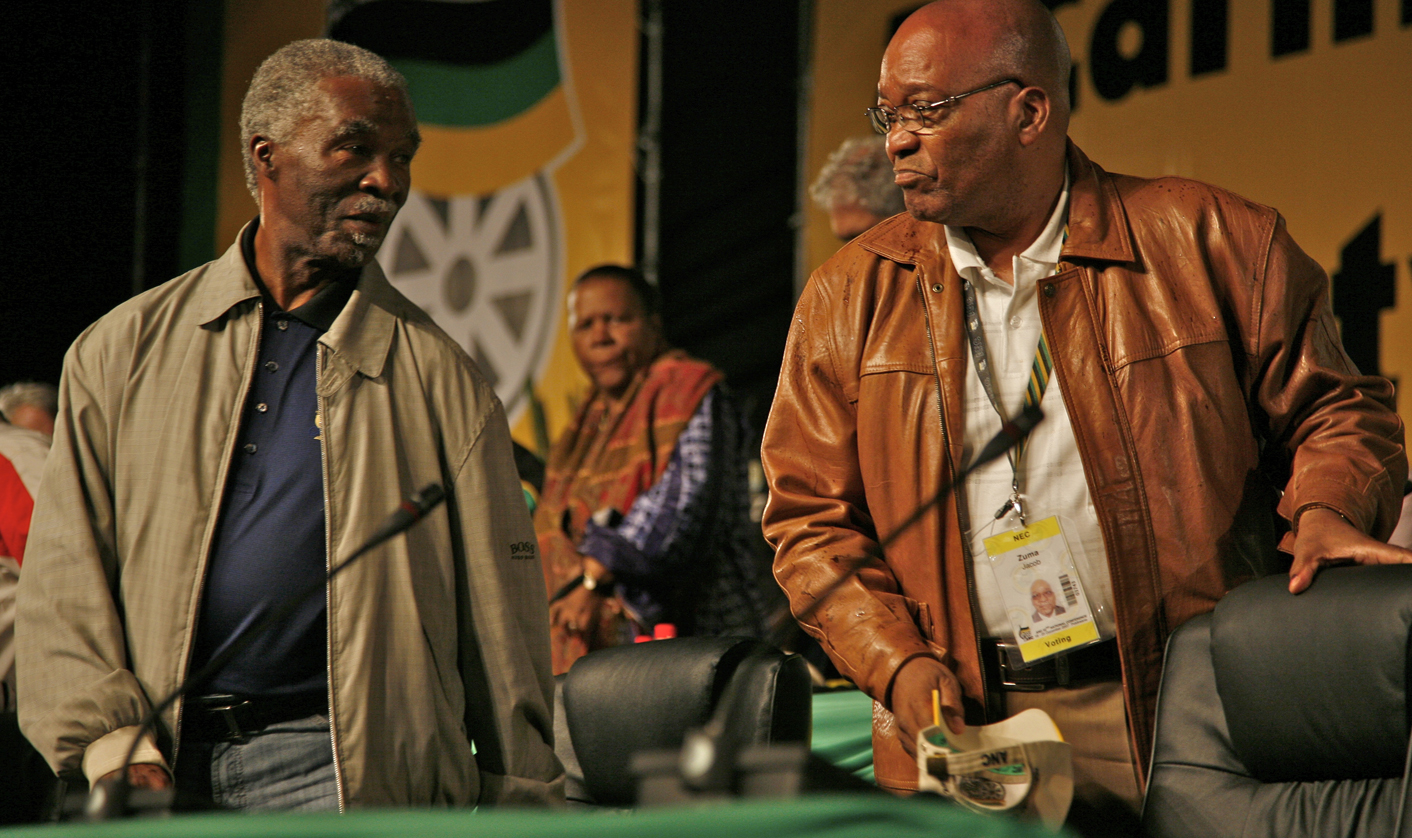 The 2007 conference in Polokwane was a turning point in the ANC’s history and effectively changed the destiny of South Africa. The much-hyped Mangaung conference could also be a turning point, but times have changed and so has the ANC. Mangaung will be nothing like any of the previous events. By RANJENI MUNUSAMY.

Each of the five post-liberation ANC National Conferences has taken place in a different epoch for the ruling party and they have all been defined by the context in which they occurred. The 49th conference in Bloemfontein in 1994 was the first post-democracy gathering of the ANC and was a celebration of the organisation’s defeat of Apartheid and rise to power. The ANC was settling into government and had to define a course of action for the state for the very first time.

Then ANC President Nelson Mandela said the following in his political report to the conference:

“And so we assemble today, at this the 49th National Conference of the African National Congress, converging from Union Buildings and Tuynhuis; from parliament and regional legislatures; from ministries and provincial governments – as the majority organisation in the first ever democratically elected government of our country. We have converged from the shop-floor and informal settlements; from places of worship and learning; from urban and rural areas; as business-persons and professionals – African, Coloured, Indian and white – a microcosm of South African society.

“For the first time in the history of our country, we have under one roof, sharing the same vision and planning as equals, delegates from every sector of South African society, including those who hold the highest offices in the land. This in itself vividly captures the qualitative change our country has undergone: a dream fulfilled and a pledge redeemed.”

The next conference, in Mafikeng in 1997, was defined by the ascension of the ANC’s crown prince, Thabo Mbeki, to the presidency. Mbeki was groomed take over the reigns of the state from Mandela in 1999 but the transfer of power began at the ANC’s 50th conference 18 months before.

Perhaps the most memorable thing about that conference was Mbeki saying in his address: “Madiba, members of the press have been asking me how it feels to step into your shoes. I’ve been saying I would never be seen dead in such shoes. You wear such ugly shoes!”

Up to this day there are interpretations about whether this was just something said in jest or whether Mbeki was making the point that he did not intend to be anything like Mandela and that he would not follow in his footsteps.

Then, in isiXhosa, he said something even more curious: “If you don’t see tears in our eyes, Madiba, it does not mean we are happy… We will always seek to ask you for help, even if it is for you to carry my briefcase so that I can walk around with my hands in my pockets.”

Who would have the gall to ask Nelson Mandela to carry their briefcase?

For the next five years, the master of innuendo consolidated his power and started to beat down potential challengers, ignoring the warning Mandela gave him at Mafikeng:

“One of the temptations of a leader who has been elected unopposed is that he may use his powerful position to settle scores with his detractors, to marginalise them and in some cases get rid of them, and to surround himself with yes-men and women… The leader must keep the forces together, but you can’t do that unless you allow dissent… People should be able to criticise the leader without fear or favour. Only in that case are you likely to keep your colleagues together,” Mandela said.

It was to be the very reason for his downfall 10 years later in Polokwane. But between then, there was the ANC’s 51st conference in Stellenbosch in 2002, when Mbeki was at the height of his power and unchallenged for a second term as president.

All possible presidential contenders had been stunned and suppressed by bizarre plot allegations the year before. In the run up to the 2002 conference, Mbeki walloped the SACP and Cosatu, calling them “ultra left” and insinuating that the ANC would be better off without them.

A few weeks before the Stellenbosch conference, news broke that Jacob Zuma had been implicated in the arms deal through the Schabir Shaik investigation. Zuma went to Stellenbosch with a cloud over his head and Mbeki appeared as the magnanimous leader standing by his deputy.

Between the 2002 and 2007 conferences, the relationship between the two crashed and burned in public. Shaik’s conviction led to Mbeki firing Zuma, and Zuma subsequently being charged for corruption. While they remained president and deputy president of the ANC, the organisation split and convulsed as their power battle intensified.

Mbeki and Zuma went to Polokwane leading two distinct camps, ready for an almighty showdown that only one of them would survive. Mbeki was determined to secure a third term as ANC president and to run the country from the ANC headquarters, as the Constitution prohibited a third term as state president. Zuma had been acquitted of rape and his corruption case struck off the roll the year earlier and 2007 and was his comeback year.

There are a few things that immediately spring to mind when people think back to Polokwane. Obviously the announcement of the election results for the top six officials on that damp and humid December night will be etched in people’s memories. Mbeki and Zuma took a stroll up the ramp to the stage and only Zuma remained there.

The rebellion of delegates on the first day of the conference as then-ANC National Chairman Mosiuoa Lekota battled to control the crowd was also a sight to behold. The frustrations over accreditation, Mbeki’s mind-numbingly long speech and the rain are somewhat unforgettable too.

But the Polokwane conference was defined primarily by Mbeki’s humiliating defeat and Zuma’s triumph. Very little is remembered about policy discussions from that conference as delegates were preoccupied with the elections.

Since then, the course of history has changed. Zuma was recharged a few days after being elected ANC president and Judge Chris Nicholson found the following September that Zuma’s prosecution was invalid and quashed it. He also effectively affirmed that there was a political conspiracy against Zuma, which led to Mbeki’s recall from office a week later, which in turn led to the breakaway of the Congress of the People (Cope).

The ANC goes to its 53rd conference in Mangaung very different to the organisation it was five years ago. Many of the people who were in charge of the last conference are no longer even in the ANC. The Zuma camp fragmented during the term, but the president has managed to regain the support he lost from Cosatu. The ANC Youth League, the lead backer of his election at Polokwane, is now firmly opposed to a second term for Zuma. The configuration of support for Zuma from the provinces has also changed, but KwaZulu-Natal remains his strongest weapon.

The biggest difference is that the man who was trying to hold things together in Polokwane and was elected alongside Zuma then is now in position to make a bid for the presidency. Kgalema Motlanthe was completing his second term as ANC secretary general in Polokwane and had to rise above the camp warfare then. Now the battle against Zuma is being fought in Motlanthe’s name, although his reluctance to state his willingness to contest the presidency has meant there is no definite camp coalesced around him.

The battle of Mangaung is therefore between Zuma and his camp on one side and all other factions and interest groups opposed to his re-election on the other. The disorganisation of the “Anything but Zuma” campaign, the “forces for change” and Motlanthe’s backers – different groups with a shared goal of unseating Zuma – is primarily the reason where the president is likely to retain his position.

But the elections will not be the only battle to be fought at Mangaung. Economic policy, strategic nationalisation in particular, is bound to be at the top of the agenda. The Youth League will make a last ditch attempt to try to get former President Julius Malema’s expulsion overturned.

There are other burning issues the ANC needs to contend with, such as the mining crisis, negative perceptions about the country, the state of the justice system, the image of the police, corruption in government and the weaknesses of local government. This means that unlike the last conference, the discussions and resolutions of the 12 commissions will be extremely important.

But Mangaung, like the four conferences immediately preceding it, will make its own history. Even if the core leadership remains, the stakes are too high and the country too deep in crisis for it to be an ordinary event. This conference, in the ANC’s 100th year, will not only be about winners and losers in the party but about saving the country at a time when mass discontent is evident and leadership is not.

Mangaung will never again be just a place, but forever a moment in time. DM