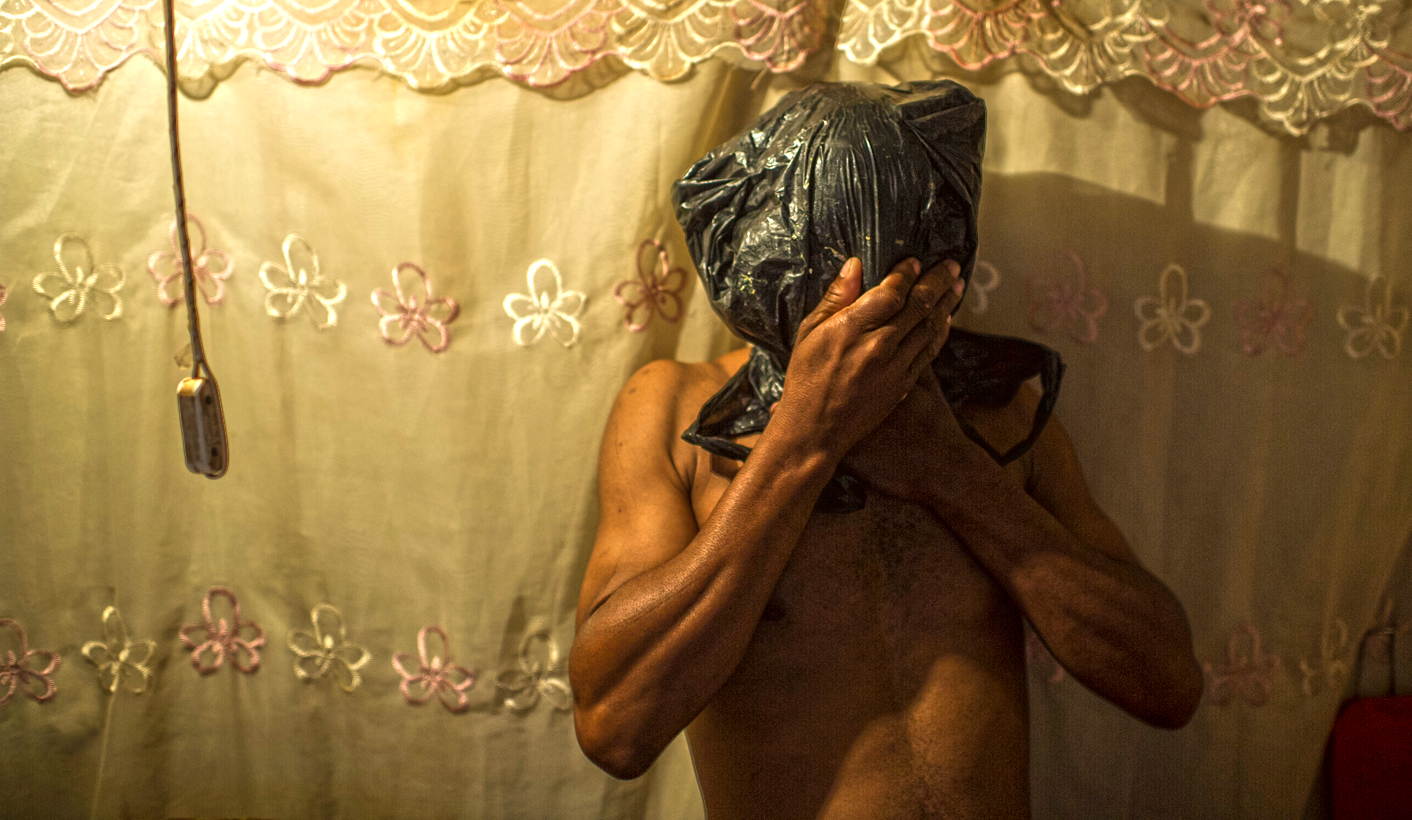 Thought the times when we were reporting on torture in custody would never come back again? That the minority's use of the repression and violence against the majority were over? How wrong we all were. By GREG MARINOVICH.

As “Bhele” Tholakele Dlunga pulled the plastic shopping bag over his head in a demonstration of the torture he had endured, he remained impassive. His hands did not tremble as he mimicked how police officers clamped their hands over his nose and mouth when they thought he was somehow still managing to get enough air to breathe despite the bag.

It was at 5:30 on the morning of 25 October when five plainclothes policemen broke down his door and stormed into his one-roomed shack in Wonderkop village, Marikana.

It was here that the first assault happened. The policemen used a black plastic bag they found in his shack to cover his head and suffocate him while they beat him. It was here that they found the unlicensed pistol that he kept next to his television set. This is the crime that he has eventually been charged with and released six days later on bail for – possession of an unlicensed weapon.

From his home, they took him to Phokeng police station, where the assault continued throughout Thursday. He was then transferred to another police station, where he was again tortured. The information the police wanted was chiefly the whereabouts of others involved in the Lonmin strike, especially the leadership. Dlunga said they had photographs of “everyone”.

Dlunga is a rock drill operator at Lonmin’s Karee 4 Belt. He is also one of the ad hoc strike committee elected by miners who had rejected the unions as ineffective and corrupt in their dealings with management. He had been at the forefront of all negotiations and discussions. He is a key witness to the events on 16 August and the events that preceded the Marikana massacre.

After relating his experiences, Dlunga slipped out of the shack and went to a nearby Somali-owned grocery store. The owner offered him the items for free, as he has been doing for affected miners throughout the strike. Dlunga refused, saying the Somali had a business to run, and paid for the bread, tea and eggs. Yet Dlunga was, as he put it, “Broke, broke, overbroke.”

After Dlunga returned, carrying a plastic bag with groceries, other miners arrived at his shack. One was a fellow church member, another was from his home region in the Eastern Cape. The last to arrive was a fellow strike leader, one of eight who were jailed over the last two weeks. He adroitly prepared scrambled eggs on bread with tea for his guests; then boiled the kettle again to heat his bath water. Dlunga stripped off and stepped into the plastic basin that he washes in. His small frame while clothed belied the musculature of his body. It is the physique of a man who lives by the sweat of his brow.

Dlunga washed gingerly; he was in pain from the beatings he had received. His voice was raspy and constrained from being choked. For three days after that assault, he could not eat.

Drying off, he fastidiously mopped the floor and then set up his ironing board. He took his time ironing the wrinkles out of a pair of smart grey trousers, while Anele Zonke, the last to enter, prepared to relate what had happened to him in custody. Photo: ‘Bhele’ Tholakele Dlunga left washes in a basin and Anele Zonke (right, prepares to tell how he was tortured by police while in custody as part of what seems to be a systematic intimidation campaign against witnesses to the Marikana Massacre of August 16th. Wonderkop, Marikana, North West, South Africa, November 1, 2012. (Greg Marinovich)

Zonke was arrested on the 23rd, also by plainclothes policemen. He is just 26, and appeared dazed, his face trembled from time to time. Zonke was in obvious discomfort as he sat down on a backless plastic chair. He, too, had been beaten and suffocated.

The men kept their eyes on Dlunga as he meticulously ironed the trousers, their creases already parade ground sharp. They were all, however, listening to the words of Zonke. Zonke tried to gloss over some of the details of his torture, but Dlunga gently prompted him from the ironing board.

It was while being suffocated by a plastic bag that Zonke lost control of his bowels and soiled his clothes. He was unable to get other clothes as police played hide and seek with the men, keeping them away from their lawyers. He washed his reeking trousers in the basin and waited, naked, for them to dry. He did not wash his underpants, keeping them as evidence. The jailed men hope to present when they lay assault charges against the police. When he appeared before a magistrate, inexplicably charged with the murder of the 34 men the police themselves have already admitted to shooting, he wore no underwear.

Dlunga applied roll-on deodorant and then rubbed cream into the skin of his hands and throat. He was almost ready to go meet the other released prisoners. Zonke’s charges were probably under the Common Purpose doctrine that was used to arrest more than 270 survivors of the massacre in its immediate aftermath. On Friday, the magistrate threw the charges out, and as Zonke walked out a free man, police arrested him outside the courtroom.

He could not say exactly what he was charged with. Murder and a few other crimes, he stammered uncertainly. He could not say whose murder he was being charged with. Zonke is not a well man; he cannot stop his bowels working constantly. He had pain deep inside his abdomen, and squirmed as he sat. He was just a husk of the energetic, bright young man of two weeks before.

The torture he suffered has left him ashamed and withdrawn. Torture shames the victim. Shames him because he is rendered powerless, at the mercy of his tormentors; ashamed that he undoubtedly gave the police many of the answers they sought. Besides Zonke and Dlunga, strike leader Xolani Ndzudzu and “Rasta” Thembele Sohadi were also severely tortured. Elite soldiers and spies are trained to survive torture, not resist it. No one resists torture, it’s simply a matter of when you will break under extreme duress. These miners have not undergone that kind of conditioning, and they were at the “‘mercy” of men clearly versed in savagery.

By Tuesday, Advocate Dali Mpofu’s team managed to secure the release of seven of the nine jailed men. The charges they face have changed from day to day.

The miners want a fair salary, reasonable work and living conditions which afford them some dignity. Some of them broke the law. A few among the thousands that went on strike did indeed kill people. Several of those implicated in those murders have been in police custody since before the Marikana massacre.

It is clear that the police are abusing their power to intimidate and terrify the miners, who are expected to be important witnesses against them in the Farlam Commission. They do not want the truth of what happened to emerge – this is self-evident from the way a senior police officer like Colonel Johannes Botha ducked and dived about why the police shootings were not, allegedly, filmed.

The miners are scared. They fear the police and they fear the consequence of speaking out. Yet they have spoken out, and they will lay charges against the police.

As the group readied to leave, they were greeted by women from a neighbour’s house. The women were there to undergo spiritual training, both Christian and traditional. They prayed every day after they learned of Dlunga’s arrest. They prayed for Dlunga Friday, Saturday, Sunday and Monday. They prayed that he be released, if he were innocent. They said that, in their prayers, they always include people arrested by the police because the police often arrest the innocent.

We can only hope that a few good men and women in blue have the courage to stand up against their criminal colleagues.

We also hope that we will not be reporting an even worse fate for these miners. DM