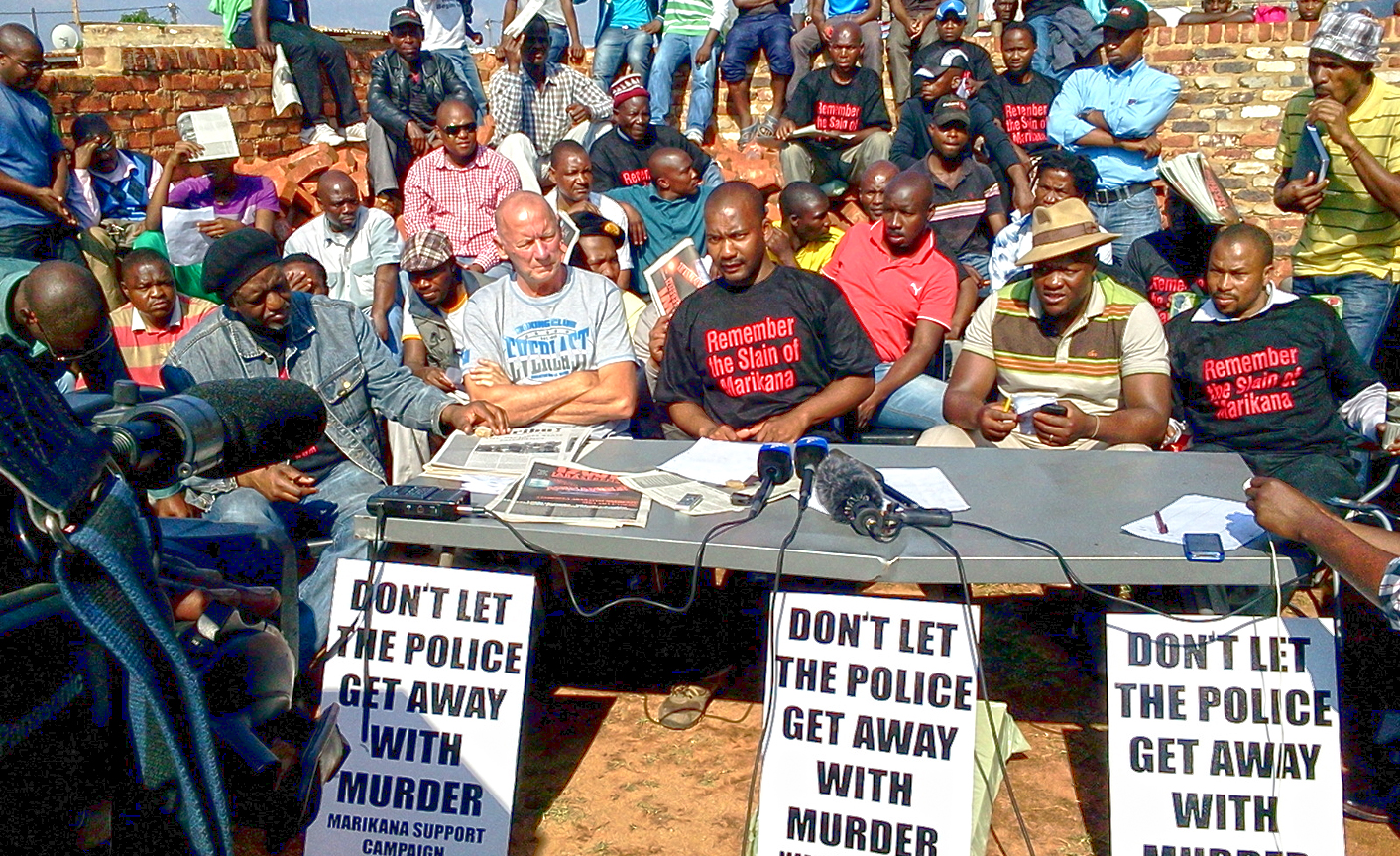 Close on a hundred wildcat strike leaders from mines in the North West, Gauteng, Mpumalanga and Limpopo met in Marikana this weekend. The resolutions adopted there included intensifying mine strikes, broadening labour action, a programme to occupy shafts and the call for a national general strike. In reaction, NUM laughed off the threat of workers downing tools across industries countrywide, but still called on police to beef up action. All of this as President Jacob Zuma on Friday night called an emergency meeting between government, labour and business to discuss “the vulnerable state of the economy”. By MANDY DE WAAL.

The sun beat down defiantly amidst grey clouds on mining workers gathered at Marikana’s RDP housing project on Saturday 13 October, a mere 3km away from the site of the massacre. Strike leaders came from mines near and far – Anglo Platinum (the world’s top platinum producer), Northam Platinum, Samancor, Royal Bafokeng Platinum; as well as from mines in Carletonville (Gauteng) and Burgersfort (Limpopo).

About a hundred workers, socialists and activists sat on bricks, plastic chairs or rubble adjacent to an empty building. All eyes were focused on Evans Ramokga, a strike organiser from Anglo American Platinum (Amplats) – which is a subsidiary of Anglo American, listed on the LSE and JSE.

“NUM (the National Union of Mineworkers) will never win. We must go to Harmony, and Doornkop (mine) in Soweto. We must mobilise them all,” said Ramokga in a mix of languages. “Platinum is our first goal, but the gold industry must go the same way.”

Ramokga cut a charismatic figure with his eloquence, fuelled by passionate persuasion. Around him, a predominantly male field of workers punctuated his speech by punching their fists in the air and shouting: “Amandla”.

“Remember that NUM will turn against you as the leadership of these strikes. But we must act like leaders. If a police helicopter flies above, we mustn’t run scared; as leaders we must stand our ground. We must stand firm and unafraid.”

This was the first strike meeting held on Rustenburg’s platinum belt to draw such wide and representative participation from employees in the mining industry. Strike leaders and workers from Impala Platinum and mines around Klerksdorp sent messages of solidarity and apology.

Also in attendance (and sitting alongside local socialists and activists) was Alec Thraves of the far-left Socialist Party (of England and Wales). Thraves is also a member of the Trotsky-esque Committee for a Workers’ International. “I don’t believe that the ANC is supporting workers or mine workers in general,” said Thraves. “They support big business and the bosses.”

“The world is watching the South African miners, the world is supporting the miners, and I want to see a victory for the mine workers and the working class as well. That can only be achieved under socialism. We need to get rid of this stinking, rotten capitalist system and make sure we have a socialist society where mine workers and other workers can have a decent future,” said Thraves.

There was a burst of applause for the UK socialist who added that unions in 45 countries across the globe would be mobilised through the Committee for Workers International (CWI) to support the proposed mass action in South Africa.

Many other strike leaders wanted to address the meeting, but it was drawn to a close by Mametlwe Sebei, a member of the strike co-ordinating committee, who is also the spokesperson of South Africa’s Democratic Socialist Movement (DSM).

A scheduled media conference was running late and Sebei was eager to announce strike committee resolutions, which included a decision to intensify strikes in the platinum sector, extend strikes to the gold sector and beyond, occupy shafts, and to call for a national general strike. Nationalisation and the formation of a new socialist party were also on the agenda.

“No amount of threats or death can stop us; we are determined to continue with the (mining) strike,” said Sebei, who outlined a programme to intensify labour action and to call for a national minimum wage in the industry of R12,500.

“The struggle will be escalated and we are asking all workers to prepare for a national, general strike,” Sebei declared. “We are calling for solidarity committees to be formed in all regions and in all sectors. The bosses, government and the tripartite alliance will work together to crush strikers with blood if need be. But no attack will deter us, no matter how long and how challenging,” he said.

Watch Mametlwe Sebei calling for a national, general strike at a meeting of wildcat strike leaders in Marikana

But the National Union of Mineworkers scoffed at the proposal of a national general strike. Speaking to Daily Maverick by phone, NUM spokesperson Lesiba Seshoka said that the Democratic Socialist Movement wasn’t behind the current wildcat strikes and didn’t have the capacity to co-ordinate a national, general strike.

“I don’t think that organisation (DSM) knows what they are doing. If it were to organise a one-day national strike, which is going to be illegal, it runs the risk of being sued by the mining companies for loss of production because you can’t run an illegal strike,” Seshoka said.

“We as unions have always said we don’t want to be a part of anything that is illegal. I don’t think it would work. This is going to fail. It will come into the political sphere the same way as the Congress of the People. When it came there was a lot of steam, but if you look at what the Democratic Socialists whatever are trying to form, it doesn’t even have steam. It is unlikely that it is going to succeed,” he added.

Seshoka sketched a complex set of motivations by parties that he said were using the strikes for selfish benefit. “You have people who want to use this for nationalisation, you have people who want to use the violence for recruitment and the formation of new unions, and you have many parties coming on board hoping that they will get a chunk of membership from those who are disgruntled with the ANC.”

The NUM spokesperson called for an intensified police presence in Marikana and beyond, which he said would restore law and order in the mining sector. “The police have to be there, and they must be there in bigger numbers. Even if they are there now they are losing the battle to criminals. They are not losing the battle to strikers, but to criminals – those people are there to cause chaos, to ensure that property is burned, that people are killed. We can’t have the promotion of lawlessness,” Seshoka said.

“The strike is illegal, but for them to go on an illegal strike doesn’t make them criminals. The criminality comes in when people burn property, when people going to work are intimidated, and are burnt or shot and so on,” he elaborated.

Seshoka accused the DSM of being opportunistic and hijacking the wildcat strikes. “The DSM is too excited. They think this is the shortest route to nationalisation. But NUM is known for seeing socialism as the future of South Africa. If you say today that you want socialism tomorrow, how are you going to get there? Is that even possible within the legal framework that we have?” asked Seshoka.

Strike leaders gathered in Marikana in defiance of the government ordinance that “illegal gatherings” would be “dealt with accordingly”. People living in Marikana and Nkaneng know all too well this means teargas and rubber bullets which have already claimed many lives, including that of ANC PR councillor Paulina Masuhlo.

Amongst the crowd were Amplats strike leaders and a large contingent of workers who had ignored a deadline imposed by mining management to appeal the dismissal of 12,000 employees. “We took a decision this past week that workers of Anglo Platinum are not going to be appealing, are not going to be honouring the process of disciplinary enquiry. We are saying that we expected management to engage us, not with dismissal, but with the demands that the workers have put on the table,” Sebei said.

Amplats wildcat strikers wanted an increase to some R16,000 per month. The weekend brought a new demand for a minimum mining industry wage of R12,500. “No worker must be paid anything below that,” said Sebei.

Speaking on behalf of the strike leaders, Sebei said miners should occupy shafts, and called on communities to support this action by bringing strikers food and water. The decision to stage mine sit-ins was another resolution agreed on by strike leaders and co-ordinators during the Saturday meeting which ran from 10h00 to 14h30. A media conference followed this, where Sebei announced resolutions to SABC, Sunday Times, Daily Sun and other media present.

In an earlier statement, Amplats said that employee work levels remained below 20%, and that most mines north of Rustenburg didn’t have enough staff to operate. “Total lost platinum production has amounted to 67,000 ounces, resulting in approximately R1.1 billion of lost revenue. The average loss of platinum production is 3,800 ounces per day,” the statement read.

It has been two months since violence rocked the platinum belt, leaving more than 50 people dead, creating a massive crisis for Zuma’s government, and realising ratings downgrades by Moody’s as well as Standard & Poor. With investors on edge, City Press reported that Mining Minister Susan Shabangu lobbied for the ANC to remove nationalisation from the Mangaung agenda.

“Speaking after an emergency meeting about the vulnerable state of the economy – called by President Jacob Zuma on Friday night between government, business and labour – Shabangu said it was going to be ‘very difficult’ to restore investment confidence,” City Press reported.

Shabangu told City Press it was not so much the strikes that made investors “jittery”, but talk of nationalisation and a possible spread of wildcat action. “The biggest issue when it comes to policy issues is whether Mangaung will nationalise (mines). We’ve dealt with that issue, but (investors) continue to raise it,” Shabangu said.

The paper quoted independent financial analyst Ian Cruickshanks, who said South Africa was “no longer the shining example of a well-managed democracy on the continent” and that the downgrades edged this economy even closer to “non-investor” status.

Will South Africa be able to restore some of its lost lustre as an attractive investment destination?

Currently, the mining sector resembles a boxing ring with government, mining capital and the unions as the has-been, punch-drunk heavyweight. In the opposite corner is a fresh, nimble featherweight who’s got nothing to lose and everything to win. The populist crowds are going wild for the underdog because the big guy just can’t cut it anymore.

Whatever the outcome, what’s sure is that this fight isn’t likely to be over in the first round. DM

Main photo: Mametlwe Sebei (centre) a mining strike coordinator and member of the SA Democratic Socialist Movement announces the call for a national, general strike. To the left, Alec Thraves of the Socialist Party (of England and Wales).