Your membership’s no good here, NUM! 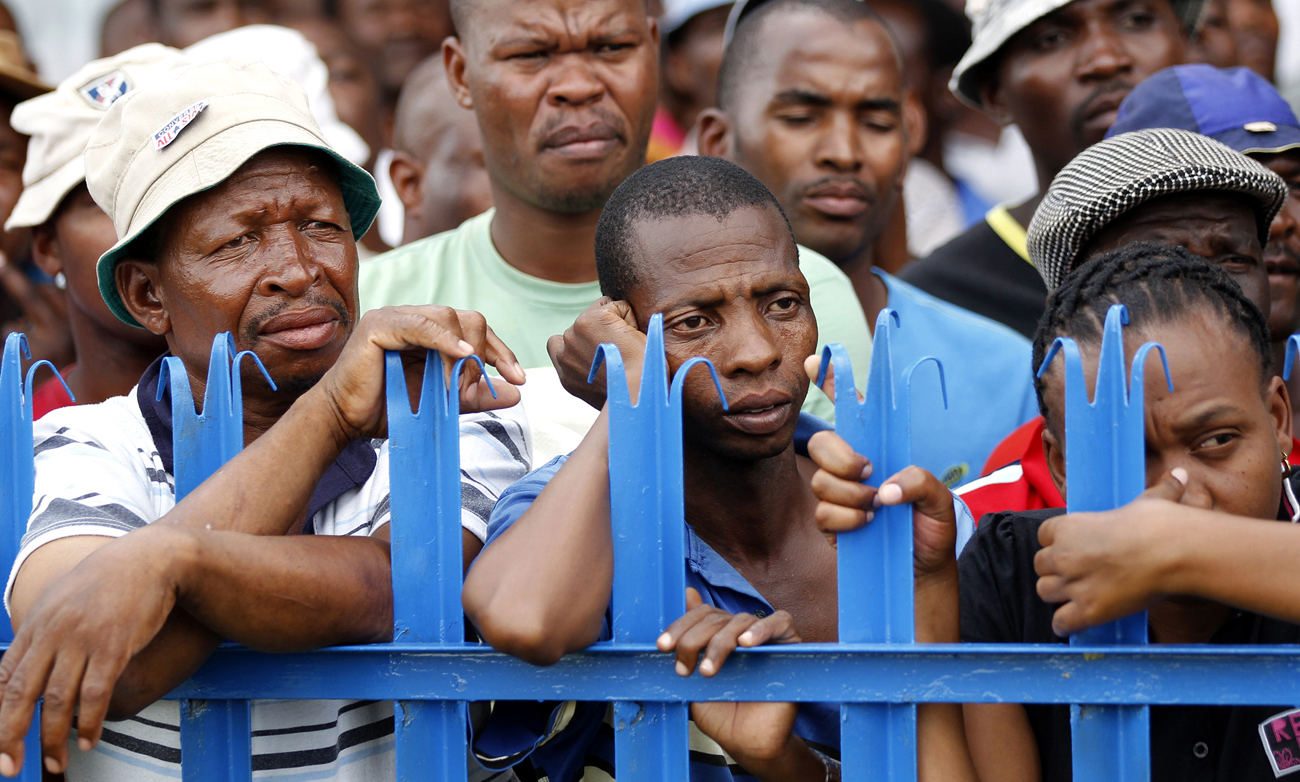 The National Union of Mineworkers has a rich history, from ending the job reservation system to producing South African leaders. But it’s been dealt blow after blow this year and the most recent comes with statistics. There’s a legitimacy crisis and the union needs to act fast. By GREG NICOLSON.

In a letter dated 1 October, Impala Platinum told the National Union of Mineworkers (NUM) it no longer has enough members to be recognised at the Rustenburg mine. Implats said that since March many of its 28,000 employees had abandoned the union and it now represents only 13% of the workforce, down from a claimed 70%. That’s far below the 50% plus one the NUM needs to maintain its recognition agreement. Impala has given it three months meet the quota or get out.

Shortly after, Mines Minister Susan Shabangu blamed Implats for the unprotected strikes that have spread through the mining industry. “Are they not responsible for what we are seeing today?” Cosatu, the NUM and the South African Communist Party (SACP) agreed. “We reiterate what we said in the congress – that it is the mine employers in general and Impala bosses in particular who must take full responsibility for all the strikes that are spreading in the mining industry. Impala committed a grave error in offering an 18% increase to one category (miners) to the exclusion of the rest of the workers of Impala and, more seriously, outside the collective bargaining process,” they said in a joint statement.

Impala witnessed a violent strike in January and February after it awarded miners, one category of the workforce, an 18% pay increase. Aggrieved by the selective pay hike, rock drill operators went on strike, followed by the rest of the employees. Most were subsequently dismissed, with 87% later rehired. Throughout the process Impala maintained the pay rise was to match industry standards and while it wasn’t part of the collective agreement, the NUM had agreed to the increase. Since the union failed to control its members, Impala has been hostile to its recognition.

The NUM’s failure was clear for all to see: it said members should work; they refused. But the industrial action was stoked, said the NUM, by the new kid on the block, the Association of Mining and Construction Union (Amcu). During its recent rise, strikes have been marred by intimidation and violence, and some miners have lost their lives or been hospitalised for being linked to the NUM. There’s no wonder NUM members are fleeing.

But since the Marikana strikes it’s now apparent that people aren’t blindly leaving the NUM against their will. Many are fed up with their salaries, tired of their living conditions, sick of unsafe work practices and suspicious of union leaders. The ANC, Cosatu and the SACP are blaming Impala for causing the current unrest, but that the Impala strike and Marikana tragedy are what triggered grievances that have been packed like gunpowder across the industry.

Since those grievances exploded, worker sentiment appears to have turned against the NUM. Julius Malema’s claims that the union’s leaders are “stealing this gold from you” and “making millions from these mines” were dismissed by Cosatu. Yet to believe Malema’s claims workers only have to look at Cyril Ramaphosa. He founded the union only to become one of the richest men in the country and sit on Lonmin Plc’s board. His response to the tragedy at the platinum producer was seen as too little too late.

Many of the NUM’s problems appear similar to those of the ANC. Deputy Secretary General Tshimane Montoedi recently warned that workers are joining the union to enrich themselves and officials being elected on networks of patronage. “Those are the tendencies that I am worried about. A new tendency where money plays a role in determining the leadership outcome. It is a serious cause of concern.”

At the recent Cosatu Congress, General Secretary Zwelinzima Vavi warned a “growing social distance between the union leaders and the membership” can mean workers’ concerns go ignored. “If we have a leadership that is so far removed from the realities of the working people then a danger may creep in that they do not take up issues that do not reflect them directly because they have a comfort in the status quo,” he said.

Speaking in September, Vavi noted that miners “toil in the most wretched, unhealthy and dangerous conditions kilometres underground, for wages that come nowhere close to the value that their labour creates for their employers. The rock drill operatives at the centre of the (Marikana) dispute perform a more dangerous, unhealthy and difficult job than anyone else in the world. They face death every time they go down the shafts. Yet their monthly earnings are just R5,600!”

The failure of Cosatu and the NUM to improve these conditions makes them vulnerable to rival unions. They face a crisis of legitimacy that will be hard to overcome. The NUM has been a post-Apartheid leadership factory, propelling members into the highest echelons of business and government, far from their roots. It’s also connected to the ANC, which has had years to improve the wages and living conditions of miners and failed. Amcu isn’t hampered by such a history.

The NUM has vowed to take Implats to court over the threat of rescinding the union’s recognition. Reports say some members were literally forced to quit over the barrel of a gun. NUM will also dispute the member verification process, which Implats carried out independently after continued roadblocks in dealing with NUM and Amcu. NUM spokesman Lesiba Seshoka said the union has risen above past challenges, such as the one from the Mouthpiece Workers Union, and will rise again.

But the crisis of legitimacy runs deep. To repair some of the damage and build foundations for the future, Cosatu and the NUM need to help put an end to the ongoing killings and must achieve a favourable agreement in discussions with the Chamber of Mines. The NUM must identify its own shortcomings and ask whether a new system of wage negotiations is needed, whether mining royalties benefit communities and how unions, companies and government can collaborate to improve the living conditions of mine workers.

The uprising across the mining sector shows that workers simply do not believe that the NUM represents their concerns. If it fails to act, and act fast, the union might find Implats is only the first company trying to show it the door. DM

Photo: Mine workers listen to Zwelinzima Vavi, COSATU General Secretary (not in picture), during his address at the Impala Platinum mine in Rustenburg, 120 km (74.6 miles) northwest of Johannesburg February 21, 2012.  REUTERS/Sipiwe Sibeko