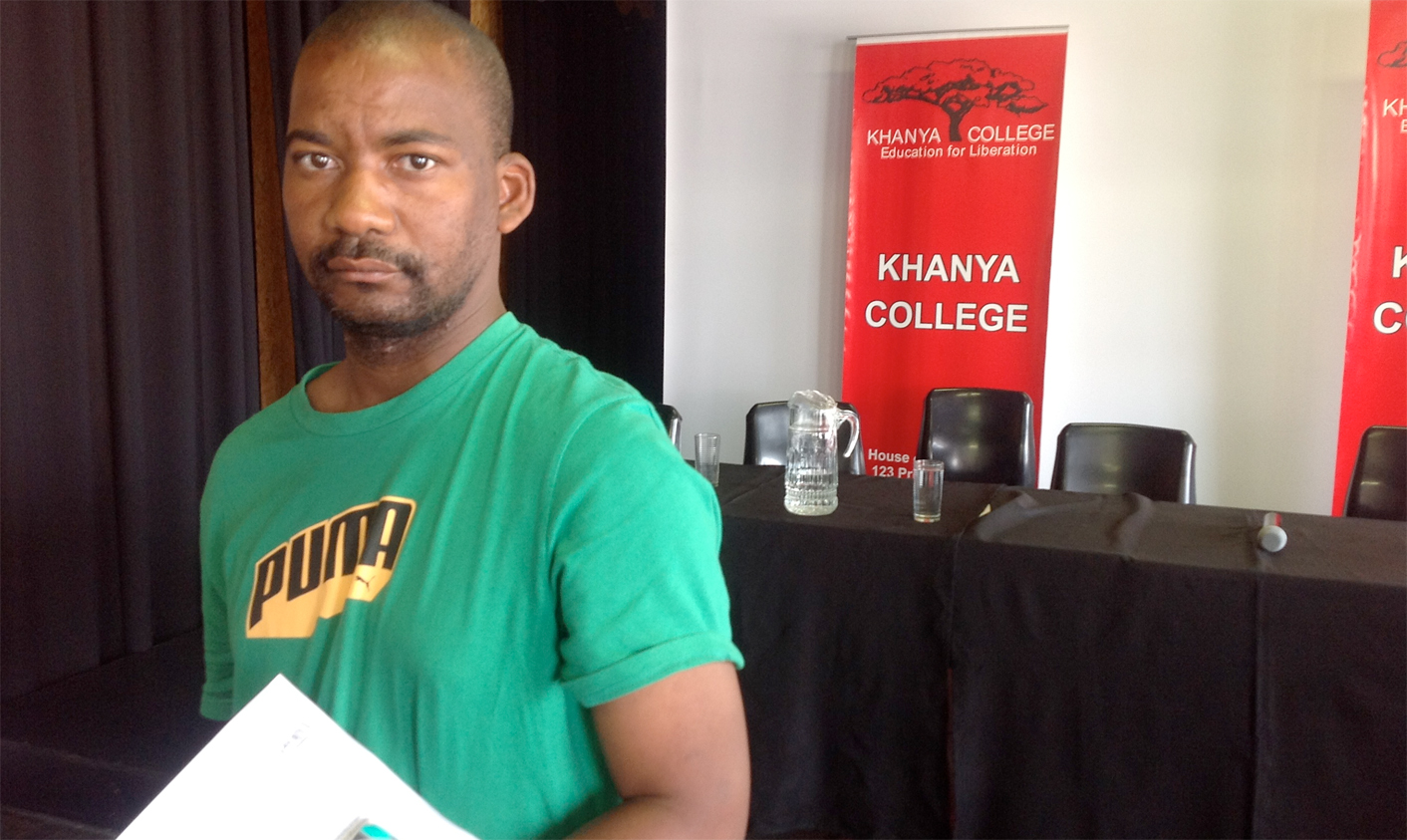 The bloody violence, police clampdowns and wildcat labour strife that’s spreading across the country like a virus is not just about wages and living conditions, it’s about something much bigger. It is the contagious birth struggle of an emerging socialist movement that could deliver a new labour party to South Africa. By MANDY DE WAAL.

The wildcat strike that started on Marikana’s platinum mines on the North West, and which has already seen the loss of some 46 lives, has now spread to the iron ore industry. Workers at Kumba Iron Ore’s Sishen mine in the Northern Cape have downed tools. Kumba Iron Ore is an Anglo subsidiary.

On the Gauteng/North West border, thousands of workers at Harmony Gold’s Kusasalethu mine near Carletonville started an illegal strike. “Last night, following a mass meeting, about 300 people started barricading the area to Kusasalethu. They hindered the night-shift guys from going underground,” said Marian van der Walt, the mine’s corporate and investor relations executive. She added that negotiations had begun between management and strikers, who had already handed over a memorandum of wage demands.

But the industrial action isn’t only about better wages, says Mametlwe Sebei, a leader in SA’s Democratic Socialist Movement, which is helping to co-ordinate independent strike committees in Rustenburg and beyond.

“We are campaigning for a new party, for a labour or socialist party to emerge,” says Sebei, who added that the Democratic Socialist Movement was mandated to draw up a resolution that can be voted on by mine workers to make a case for a party. The paper, which has not yet been circulated amongst workers, would also highlight the programme and ideology of what would be a new socialist, labour party.

“This is not an idea that emerged from us at the Democratic Socialist Movement, but in actual fact it has emerged on the ground,” says Sebei. “That is not to say that we haven’t been consciously campaigning for this, but the circumstances and conditions in Rustenburg have rapidly changed consciousness. What the workers are asking is: ‘What are we doing about this government that is killing us?’ The ANC has never represented the working class, and even though this country has been built on the blood of mining workers, neither does Cosatu.”

Sebei said the spreading wildcat strike action illustrates that the National Union of Mineworkers (NUM) and Cosatu are losing their power base amongst workers. “The illegal strikes show that NUM has consciously acted against the mandate it has been given by the workers, and if anything they are the conscious agents of the mining bosses. NUM through Cosatu is knotted into the tripartite alliance that of and by itself ties itself to the interests of the mining bosses who are represented by the ANC.”

A case in point, believes Sebei, is the sponsorship of Cosatu by Patrice Motsepe, who ranks as the fourth wealthiest man in South Africa with a net worth of some R22.75 billion as at March 2012, according to Forbes. Motsepe has interests in platinum, gold, coal, iron and manganese through African Rainbow Minerals, the company that helped build his billions, and was one of the first big BEE winners post democracy, when mining rights were only granted to ‘empowered’ companies. In its profile, Forbes talks about how Motsepe is labelled as an ‘oligarch’ in this country.

“But for all the adulation, in South Africa such success comes with a price: being labelled an oligarch. Even many blacks have complained that the country’s 1994 transformation from Apartheid to democracy has benefited only the elite few,” the Forbes article on Motsepe reads. “The criticism stems from laws that require substantial black ownership in certain industries, including mining. A handful of politically connected individuals have grown enormously wealthy as a result,” the article states, pointing out that one of Motsepe’s sisters, Bridgette Radebe, is married to ANC deputy chair and Minister of Justice and Constitutional Development, Jeff Radebe.

“Motsepe has been sponsoring Cosatu for years. If you look at the report for the congress before this one, Motsepe was the biggest donor. This means that Cosatu is highly compromised,” says Sebei. As the Cosatu congress was underway in Midrand this September, Business Day showed African Rainbow Minerals to be the unions’ biggest private financial supporter:

“African Rainbow Minerals (ARM), owned by businessman Patrice Motsepe, is the largest private donor to the Congress of South African Trade Unions (Cosatu), having contributed R1.75m to the federation over the past three years,” the report read. “This does not include ARM’s donation to this year’s congress, where Mr Motsepe was again the biggest donor. The size of this year’s donation has not yet been disclosed.” Motsepe funded Cosatu’s 2009 conference to the tune of R1m, and that same year donated R1.75m to a trust that supports dependents of deceased officer bearers.

“A debate has emerged about whether it is time to reconstitute the labour movement,” says Sebei. “This is a debate that is emerging within our own ranks, but the events of Rustenburg and the workers’ own action in defiance of mine bosses and NUM show that the move to earnestly rebuild the labour movement from scratch has begun. The workers will reclaim the labour movement for their own control and their own struggle, and I think that is a warning to Cosatu and to the rest of the other unions in Cosatu who think that they have a God-given right to lead the workers.”

Sebei said that the Democratic Socialist Movement was campaigning for a new socialist, labour party to emerge. “We need to be able to build a mass political party that will unite all the workers in the mining industry with all other workers in all other industries, but also with all communities in struggle, and with youth in campuses… this is an idea that has found its echo in Rustenburg and beyond.”

The call for a mass political alternative, which Sebei said would be based on the ideas and programme of socialism, would be given a loud voice on 13 October 2012 when workers, activists and youth would march from Church Square in Pretoria to the Union Buildings.

“We are saying that the entire mining industry, and the rest of the economy, must be brought under democratic control and the management of the working class. This means that mines must be nationalised first and foremost, so that the economy can be planned to meet the needs of the people, and not for the profits of those who have become rich at the expense of all of us during the past 18 years of democracy,” Sebei says.

According to Sebei, march organisers have been having significant problems with the police and local authorities “using every trick in the book” to try and stop the march from going ahead. “The authorities are being very difficult and trying to block us, but we are giving ourselves all the time we need to ensure we comply with Constitutional requirements, so that our march can go ahead,” says Sebei, who believes that some 10,000 workers, activists and students will participate in the protest action in the country’s capital.

“The working class needs a political party and government of their own, one that will take the entire economy under democratic control to ensure that our sweat and blood is not for the few, and to ensure that the misery we are wallowing isn’t a natural order of things. Our country is enormously wealthy – wealthy enough to create a better life for those living in misery, poverty and unemployment. All the parties that exist currently are different shades of capitalism. There is no one party that represents the interests of the working class. If you look at the number of people who are qualified to vote and who don’t vote, it is not because of a lack of political interest, it is because no one represents the workers. There is no one to take our issues to government,” he says.

Government has failed South Africa’s poor, and what it has delivered to the working class is in too many ways disappointing. The notion that capitalism has betrayed the working classes is a global phenomenon which will not escape this country either. But its expression here could be more militant: those with nothing to lose may finally cry: “Enough!”

Sebei says that the police clampdown in Rustenburg, together with the difficulty workers and political activists have been experiencing in exercising their right to gather, are as a direct result of the rising interest in a new political party. He adds that the first matter to attend to should be the strikes, and anticipates it is likely that the new labour-driven political party will be launched next year. DM