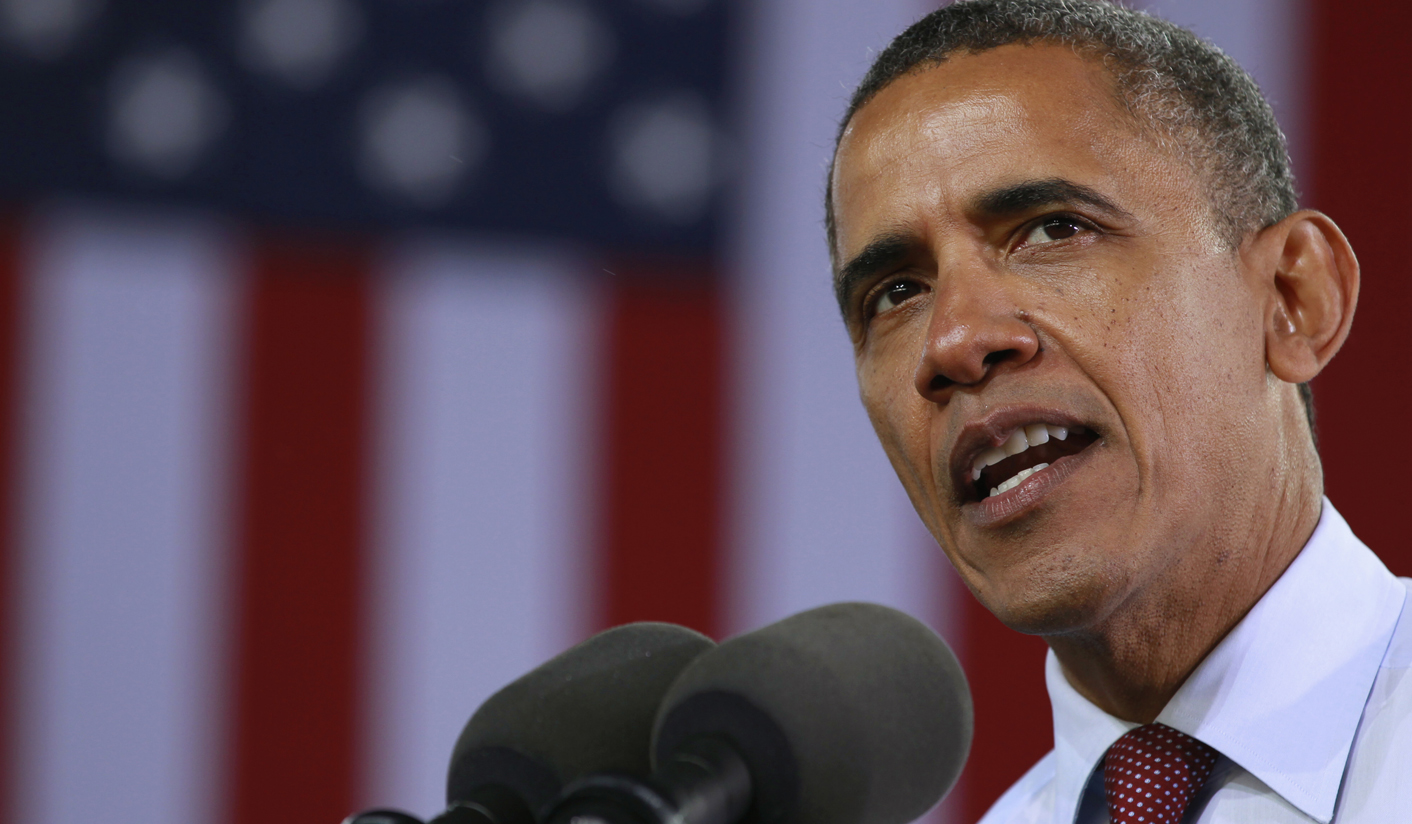 American pollsters have increasingly begun to write off Mitt Romney’s chances of victory, leaving politicians and commentators to explain why his expected loss was inevitable. Yet it remains an unpredictable world, and a lot can still happen out there. By J BROOKS SPECTOR.

Way back when President Richard Nixon was running for re-election in 1972, the US was still deeply entangled in the fourth year of its agonizingly slow negotiations with North Vietnam to end America’s involvement in an appalling, seemingly-endless Vietnam War. Nixon’s original goal was to somehow manage to leave South Vietnam under the banner of “peace with honour” to avoid admitting defeat at the hands of North Vietnam’s regular army and the guerilla forces of the Viet Cong.

Nixon had first gained the presidency in 1968, at least in part on the basis of a public promise that he had “a secret plan for peace” in Vietnam. His opponent in that election had been Vice President Hubert Humphrey. But Humphrey’s Democratic Party was deeply fractured. Incumbent President Lyndon Johnson had been forced by public pressure not to run for re-election. Humphrey had finally gained the nomination after beating off a challenge from Senator Eugene McCarthy and a second challenger, Senator Robert Kennedy, had been assassinated the night he won the crucial California primary election. Humphrey then faced defections on the left from anti-war activists who refused to support him, and on the right from supporters of segregationist Alabama Governor George Wallace.

Now, four years after his victory over Humphrey, Richard Nixon was facing the increasingly hapless candidacy of South Dakota Senator George McGovern, a peace candidate. Still, the Nixon administration was facing increasingly harsh public criticism over the fact that four years after his initial pledge to end the war, the fighting continued and negotiations to end the fighting were at a standstill.

Then, almost magically, on 26 October, less than two weeks before Election Day, National Security Advisor Henry Kissinger, America’s chief negotiator at the Paris peace talks, announced at a press conference in the White House, “We believe that peace is at hand.” Vada voom!

While Nixon was already leading in the polls – and was in fact on the way to an epic win in which McGovern only managed to win the electoral votes of Massachusetts and the District of Columbia – Kissinger’s dramatic statement put the final kibosh on McGovern’s already slim chances. By the time the ballots were counted, Nixon had won the popular vote by a 20% margin. The irony, of course, is that the last American soldiers didn’t actually leave Vietnam until 1975, in the chaos and disarray of the helicopter evacuation from the roof of the American Embassy in Saigon. By that time, Gerald Ford had become president, following Nixon’s resignation in the wake of the Watergate scandal. (Daily Maverick [http://local.dailymaverick.co.za/article/2010-10-09-take-a-historical-trip-to-a-possible-future-in-kabul] looks at the end of American efforts in Saigon)

The term “October surprise” has now entered the American political lexicon, meaning an unanticipated news event that has the potential to upend the predictable outcome of an election – especially a presidential one. October is the month for “surprises” because, just weeks ahead of Election Day on the first Tuesday in November, there is now maximum public attention on the race. The possibility of a real shakeup is possible at this stage, even if polls have become increasingly certain about a particular electoral outcome.

Probably first used to define the impact of Henry Kissinger’s announcement, it has become the moniker of an event sufficiently dramatic that it upsets predictions and projections – and means all bets are off. Presidential candidates now live in fear their opponent (especially one on the defensive) will somehow conjure an October surprise game changer, gaining crucial momentum when there is not enough time for the other candidate to rebound quickly enough or pivot back to a winning position.

Some date the term to the 1968 election. A recent story on Bloomberg said the late William Safire, a language specialist and White House aide, attributed the tactic to Nixon’s first successful run. “William J. Casey coined the term in 1968, when Richard Nixon was running for president. Casey, who went on to become (Ronald) Reagan’s Central Intelligence director, was a Nixon aide. Safire was a speechwriter for Nixon. Casey was afraid President Lyndon Johnson would engineer a Vietnam peace initiative and help his vice president, Hubert Humphrey, win the election.”

Bloomberg added that in 1980, “Ronald Reagan’s campaign was worried President Jimmy Carter would orchestrate a last-minute release of the 52 U.S. hostages held in Iran and win re-election. The conspiracy theorists turned things upside down, accusing Reagan of secretly negotiating with Iran to delay the hostages’ release until after the election.”

Now that Barack Obama has gained the lead in virtually all national polling, and even more importantly in the crucial battleground states of Florida, Ohio and Virginia, the onus is on Mitt Romney to find an elusive game changer that shakes those dice and reignites his campaign.

Alternatively, and still more unpredictably, there might be an October surprise in the form of an international crisis so momentous the political landscape is twisted all out of its current contours – giving Romney a chance to adopt a posture of national leadership that gathers up those still-remaining undecided voters in the nick of time. Finally, of course, there is that October surprise announced by the Obama White House that locks down his re-election.

Well, what October surprises could there be out there? Domestically, there are still two more sets of unemployment rate/job creation announcements still left to come – one in early October and then one at the beginning of November. Imagine what a dramatic drop (or rise) in those numbers could do to the way the two candidates must frame their stewardship of the economy, the most important issue of the campaign.

And there is also the possibility of a meltdown by one of the candidates during one of the three live, unscripted, nationally televised debates. It’s happened before: Gerald Ford gaffed about Soviet domination of Poland, George HW Bush famously sneaked a peak at his wrist watch and Al Gore sighed loudly during George W Bush’s statements.

Internationally, of course, the possibilities are much broader – and much less under the control of any American political figure. It’s a big, complicated, uncontrollable, messy world out there. Consider what might happen to America’s presidential selection if Iran actually tested its first nuclear device; or the Israelis decided that it was “go” with an attack to prevent such a test; or even that the Iranians carried out a test and the Israelis responded. Worse still, imagine the chaos if all of this happened and the US was forced into supporting the Israelis in finishing the task it started.

It is not just this point/counterpoint that would be one heck of an October surprise, but the responses across the Islamic world afterwards that would be well beyond the control of any president and a possible game changer in the presidential contest.

More positively, however, imagine the impact of one of those White House announcements that the US and the rest of the quad partners, the Israelis and the Iranians had in fact reached agreement on Iranian nuclear intentions and ambitions, and that the respective leaders would arrive on 1 November to seal the deal at Camp David. Or, perhaps, Barack Obama and North Korea’s new leader announced agreement (together with the South Korean president, and Chinese and Japanese representatives) to ink a deal – once and for all – on nuclear cooperation, diplomatic relations and new trade and aid handshakes. That new guy in Pyongyang is still a mystery.

While the pollsters have increasingly begun to write off Mitt Romney’s chances of victory and politicians and commentators are positioning themselves to explain why what happened was inevitable, it remains an unpredictable world – and a lot can still happen out there. Maybe. Or not. DM