Cosatu Congress: A Zuma moment and a house on fire 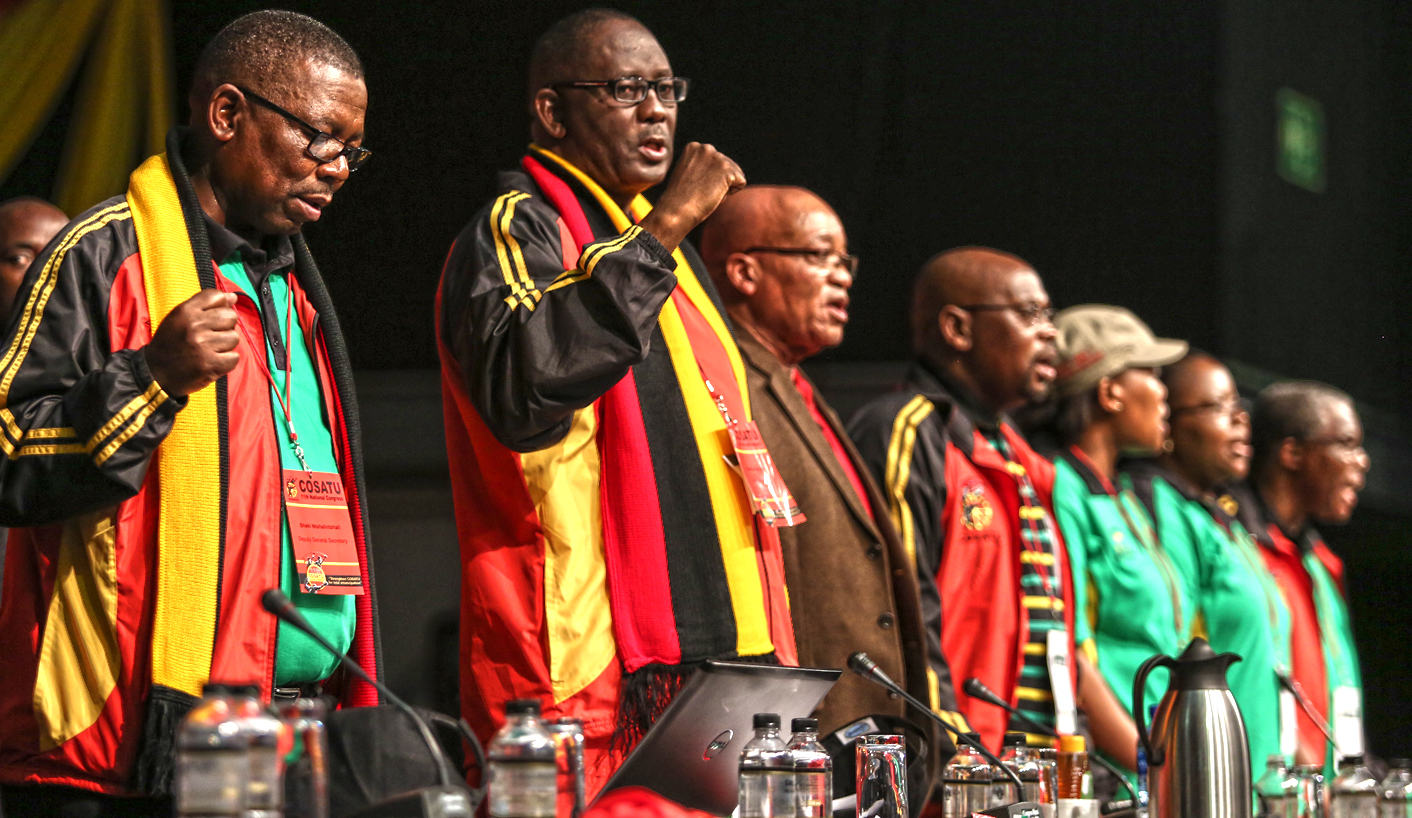 Cosatu will lodge a Section 77 notice to embark on protest action to demand a “radical economic policy shift”, is ready to take on government on e-tolling and labour brokers, and says it wants “decisive leadership” in the ANC. But even though all this indicates dissatisfaction, Jacob Zuma should remain president. After four days of squabbling, the only thing certain is that the Cosatu congress happened at the worst possible time and the federation’s war with itself has left it damaged. By RANJENI MUNUSAMY.

“Sihamba noMsholozi, Sihamba noPresident (We are going with Msholozi, we are going with the president)”, Cosatu delegates sang on the closing day of their 11th national congress. The song indicated that the delegates supported Jacob Zuma’s (Msholozi is his clan name) bid for a second term as ANC leader at the ruling party’s national conference in Mangaung in December.

Then, later on Thursday, they bestowed the “worst employer” award to Aurora Empowerment Systems, whose directors include Khulubuse Zuma, the president’s nephew, for breaking “every record in terms of dodging responsibility” and “starving workers”.

It was one of many bizarre contractions of the four-day Cosatu congress, which the federation’s re-elected president Sdumo Dlamini opened on Monday saying, “We must never compromise principle to achieve short-cut solutions”. But in order to prevent the congress being completely deadlocked over a litany of contentious issues, they had to resort to the biggest short-cut solution of them all: to defer all contentious decisions to Cosatu’s central executive committee (CEC).

All political matters, including Cosatu’s stance on the ANC leadership question, its role in the alliance, corruption and non-delivery, and transforming the state, were kicked into touch until a special CEC meeting is convened in early October. Details of the “Lula moment”, Cosatu’s catch-phrase for a radical economic policy changes based on the Brazilian experience, will also have to be worked out by the CEC.

The CEC is made up of all national office bearers and senior representatives from Cosatu’s provincial structures and affiliate unions, and meets behind closed doors. Cosatu prides itself on holding its national congresses in the full glare of the media, but decided that all fiery issues are best handled in private, where warring unions can tear into each other away from the public eye.

The bad blood between the National Union of Mineworkers (NUM) and metalworkers union (Numsa), Cosatu’s two biggest affiliates, was palpable throughout the congress as they assumed opposing positions on most issues. The two unions fall into different factions in the ANC, and while Numsa is Cosatu’s most militant affiliate pushing for radical policy change, the NUM is an ardent defender of government and wants to preserve the status quo in the ANC leadership.

One of the contradictions of the congress is that both the NUM and Numsa think they came away from it better than the other. The NUM thinks it triumphed by working with others to block the discussion on ANC leadership at the congress, despite Numsa’s fervent and repeated attempts to open the debate. Numsa thinks it got its way with the congress’s adoption of a path towards a “radical economic shift in line with the demands of the Freedom Charter”. This includes strategic nationalisation, macro-economic policy change and transformation of the Treasury.

In the run-up to the congress, the NUM wanted it to be known that they did not support Cosatu general secretary Zwelinzima Vavi to be re-elected, but were fully behind Dlamini remaining president. Numsa publicly declared its support for Vavi but said it did not want Dlamini back. On Monday, both unions stood down on the candidates they opposed and allowed both Vavi and Dlamini to be re-elected. The two men will have to carry the federation for the next three years, aware that they do not enjoy universal support internally and their actions will be under intense scrutiny.

Vavi and Dlamini tried to present a united front at the end of the congress, both preaching unity of the federation. When their re-election was formally announced on Thursday, delegates hoisted them onto their shoulders and carried them to the stage, while others sang and danced in their praise. Vavi held up an NUM signboard as he was carried aloft, perhaps a goodwill gesture to show he held no hard feelings against the mineworkers.

He did not have an easy time at the congress. Although the political report he presented to the congress was ostensibly a document of all the office bearers, including Dlamini, Vavi was challenged by his detractors on several issues, particularly the use of the word “crisis” to describe the situation in the country. Vavi has always been forthright in describing problems in government and the ANC, and constantly warns of the dangers of not addressing these. Several of the affiliates, as well as the ANC and SACP, want him to stop doing so.

Addressing the media at the end of the congress, Vavi said he was not backing off from saying South Africa was in crisis as the statistics on unemployment, poverty and inequality proved this as fact. But ANC secretary general Gwede Mantashe was not happy about this, telling Daily Maverick the phrase seemed to be “stuck in his (Vavi’s) head”.

The congress declaration, read by Vavi during the closing session, acknowledged that there were several areas of crisis including in the public health system, education and mining. While the congress adopted the declaration, NUM general secretary Frans Baleni said the CEC should be tasked with “massaging” some of the formulations in the document which some affiliates might not be happy with. It is not known which sections in particular he was referring to.

This was a clear indication that while the declaration proclaimed that Cosatu was “stronger and more united than ever”, the reality is far from it. It also stated: “We know that we cannot afford to fight silly battles against one another when the house is on fire. We have agreed that a radical agenda of socio-economic transformation must be the core element of the second phase of our democratic transition. We call this our Lula moment to speak to a successful transformation that has changed the lives of millions of workers and peasants in Brazil.”

But even in this there is contradiction. Former Brazilian president Luiz Inacio Lula da Silva embarked on radical measures during his second term in office to accelerate economic growth and upliftment for the poor. Cosatu now wants to force government into radical changes by, among other things, lodging a Section 77 notice at the National Economic Development and Labour Council (Nedlac) to embark on protest action on:

Vavi said at the media briefing that Cosatu had decided that the “macro-economic framework was “not working for us” and should change. He said Cosatu would also push for the removal of people in key positions in the state who were impediments to development.

Cosatu seems to think that by going on strike and trying to strong-arm government into these radical changes, Zuma’s administration will miraculously metamorphosise during his second term to mimic the Brazilian example. Surely the “Lula moment” – or “Zuma moment” as Mantashe called it on Thursday – requires the person in charge to champion the transition, not to be goaded into it through strikes and ultimatums.

It also means Cosatu is patently aware that despite their backing Zuma’s re-election in Mangaung, he is not going to accede to their demands without a fight. This is why they are also preparing for a new round of skirmishes with government over e-tolling and labour brokers.

Dlamini said in his closing speech that Cosatu was going to prepare for Mangaung – presumably at the all-important CEC meeting where all the major decisions would have to be taken – and wanted the ANC conference to emerge with “decisive leadership”. Perhaps after the CEC, South Africa will get to find out who exactly fits that bill.

The timing of the congress, three months before Manguang, and parallel to the strife in the mining sector, also did not help matters. Cosatu has never before looked so indecisive and clumsy, and it remains to be seen how long the awkward truce will hold. DM