Cosatu Congress: Vavi's time of reckoning, and the elus... 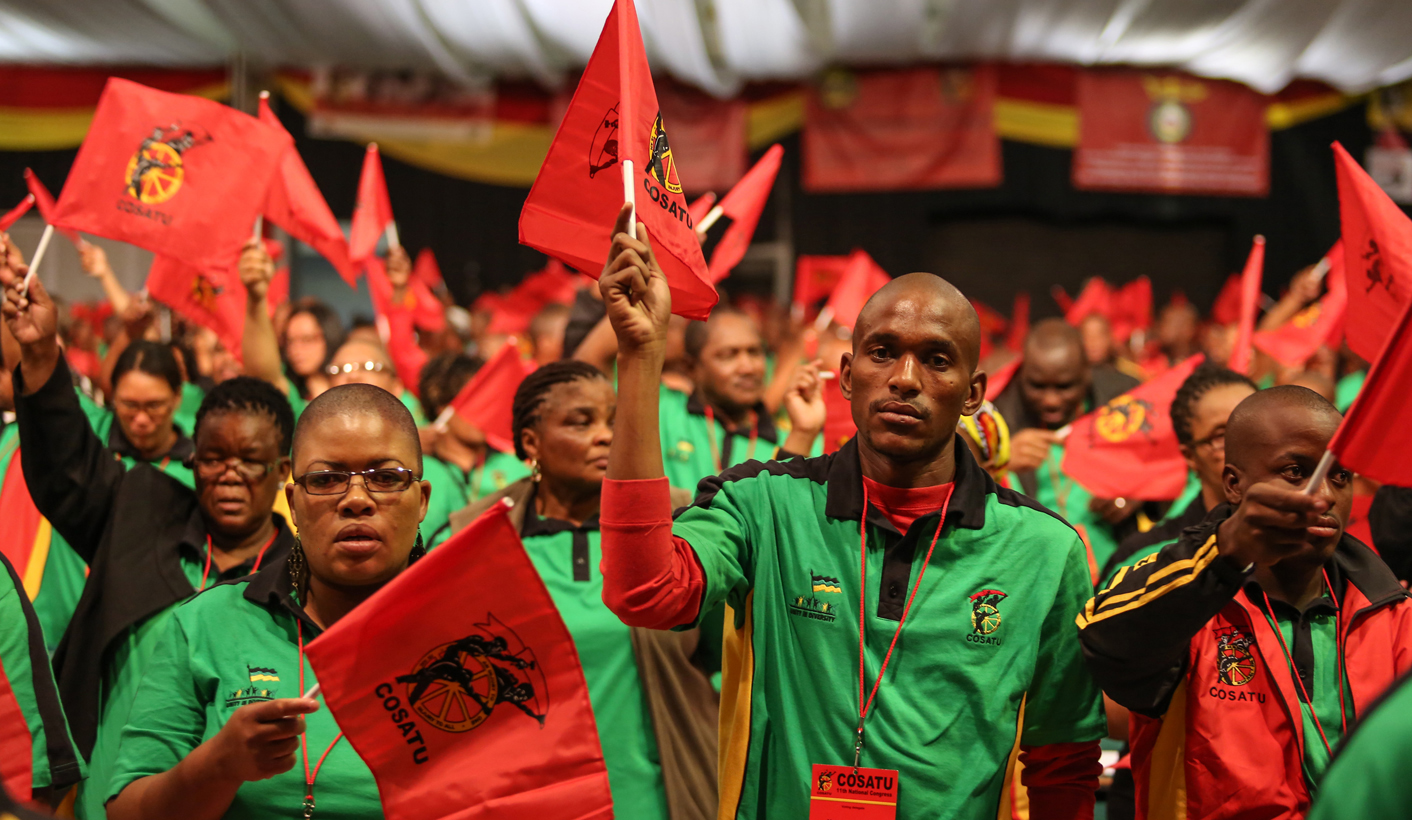 The one thing Cosatu general secretary Zwelinzima Vavi really wanted out of this week’s congress was for the delegates to agree on a strategy to work towards a “Lula moment”, modelled on Brazil’s dramatic economic turnaround. But he faced heavy fire on Tuesday for stating in his political report that South Africa was in a “crisis”. Some in the alliance believe Vavi is exaggerating the country’s problems and needs to wind down his criticism. It looks like “Crisis, what crisis?” is being repeated with a vengeance when it comes to SA's politics. By RANJENI MUNUSAMY.

There was a great irony in the fact that as news broke on Tuesday afternoon of the breakthrough in Marikana, ending the six-week Lonmin wage strike, delegates attending the Cosatu congress in Midrand were engaged in a heated debate on how best to represent the interests of the working class. The 3,000 delegates seemed oblivious to the fact that a deal had been struck so that their fellow workers could return to work and earn a living again.

An even greater irony? As the rest of the country was breathing a sigh of relief that the bloody strike – which precipitated a crisis in the mining sector – was finally over, general secretary of the National Union of Mineworkers, Frans Baleni, rose to address the Cosatu congress – not on the developments in Marikana, but to preach to the federation that it should be more “respectful” to the ANC and stop trying to dictate to it.

This followed hours of wrangling over a political report Cosatu general secretary Zwelinzima Vavi presented to the congress earlier in the day. While it is technically a report of all the Cosatu office bearers, the content is vintage Vavi, carrying his trademark of brutal frankness about weaknesses in the ANC, the SACP and the trade union federation. Strangely, the two unions whose sectors faced the biggest crises this year, NUM on the mine strikes and teacher’s union Sadtu on the Limpopo textbook debacle, were most vocal in trying to limit criticism of the ANC and government.

This ironically proved a point in the report that “some union leaders are reluctant to take up certain issues for fear of embarrassing the ANC”. The country was facing multiple crises, it said, and something “radically different” had to be done to forge a new direction.

“In our view, a multiple crisis is emerging in society, which, if not addressed, has the potential to result in an organisational implosion, and social explosion, which could reverse the gains of our democracy… We need to be shaken out of our comfort zones and develop a totally new mindset,” the report states.

Elements of this multi-faceted crisis include the ANC being “increasingly wracked by factionalism, patronage and corruption, and… unable to reassert the mission and strategic vision of the organisation”. The report says there is also a crisis in the state in which years of “neglect, fiscal cutbacks and contracting out of state responsibilities – combined with endemic corruption and a failure of political and bureaucratic leadership – together render elements of the state apparatus increasingly ineffective or even dysfunctional”.

The most “devastating indictment of this failure” was the Auditor General’s finding that only three of the 36 national government departments and only 13 out of 343 municipalities received unqualified or clean audits in 2010/11, Vavi said when presenting the report.

There was also growing disillusionment in society and questions about the legitimacy of the leadership of the movement and the state. Opinion polls were showing worrying trends, including that growing numbers of the electorate don’t intend to vote in 2014 and increasingly negative perceptions of the leadership, the report states.

The crisis of poverty, inequality and unemployment was being reproduced by the structural features of the economy. “A powerful bloc in the political leadership and the bureaucracy continue to strongly resist a change from conservative macro-economic policies. This has led to economic policy paralysis, and the failure to drive a coherent agenda, leading in turn to progressive elements of industrial and other policies failing to make a real impact in turning the situation around,” the report reads.

Vavi said all these crises required decisive political leadership such as what happened in Brazil under its former president, Lula da Silva. He said the ANC was proposing to launch a second, more radical, phase of the transition – as discussed at the June policy conference – which will coincide with the second term of the post-Polokwane leadership. There were parallels with the Brazilian experience where Lula’s first term was fraught with difficulties, but during the second term he engineered a “dramatic turnaround”.

With a clear political strategy coming out of this week’s congress, Cosatu could work towards achieving South Africa’s own “Lula moment”, Vavi told the delegates. But he was not as upbeat at the end of the debate on the report, with his proposals and assessments being shot down.

The major beef, however, was with the report’s assessment of the ANC and the SACP, but the proposal for the Lula moment seemed to suffer as a result. While most of the speakers from unions affiliated to Cosatu encouraged unity in the federation and the alliance, the debate became extremely divisive, exposing the factional rifts. The ANC and SACP wanted criticism of their leadership expunged from the document.

ANC secretary general Gwede Mantashe objected to Vavi’s comment that there were no serving trade union leaders in the ruling party’s national executive committee. He said this was not true, as there were more than 10 Cabinet ministers who came from the federation. “Once they get a responsibility in government, the federation seems to disown them. It is like a revolving door… [for members] every five years,” Mantashe said.

He said the report wanted to locate Cosatu outside the movement that was in crisis. The federation wanted to join the “deafening noise, aligning with other forces on a tactical basis” and still be the ANC’s ally on a strategic basis, Mantashe said. Cosatu should desist from trying to “delegitimise” the state by distorting facts, such as presenting the shocking findings of the Auditor General’s report without mentioning the improvements, he said.

The NUM alleged the report was unfairly critical of the SACP, saying claims that the party was absent from working-class struggles was a lie being repeated consistently. They were supported in the defence of the SACP by Sadtu, which said Cosatu’s constant criticism of the SACP’s leaders to Cabinet and Parliament was destructive and causing conflict.

Sadtu said Vavi’s proposal for a Lula moment was “theoretically misleading and ideologically wrong”. They objected to the use of the word “crisis” throughout the report. It was not accurate to say the country was in crisis as this suggested a “catastrophe”. “You can’t say the ANC is in crisis because things don’t go your way.” The word “challenge” was preferable as it gave hope that there would be solutions, the teacher’s union said.

But Vavi came back fighting on this point at the end of the debate, saying unemployment, inequality and poverty statistics showed there was a huge crisis and that Sadtu was “falling into the trap of denialism”. He said he was “not angry but very sorry” about how holes were poked in the report during the debate, as all the unions had received copies of the draft two months ago, and were able to make amendments then.

He welcomed the consensus among the unions that Cosatu should adopt a programme of action, whether it is eventually dubbed the Lula moment or the federation’s contribution to the ANC’s “second phase of the transition” terminology.

Irvin Jim, the general secretary of metalworkers’ union Numsa, said the best way to achieve the Lula moment was to implement the Freedom Charter in its entirety, which included nationalising key strategic sectors of the economy. The property clause in the Constitution should also be revisited. This should all form part of Cosatu’s proposals to the ANC’s Mangaung conference, he said.

On Wednesday, the Cosatu delegates will again consider all these proposals when they debate the political resolutions to be adopted by the congress. Moderating the debate on Tuesday afternoon, Cosatu president Sdumo Dlamini appealed that delegates “ease emotions, anger and ill feelings”. As the congress now moves from debate to firm resolutions, it will determine whether Cosatu remains a vocal and critical voice in society, or one that is more compliant and forgiving of the ruling party’s failures.  DM