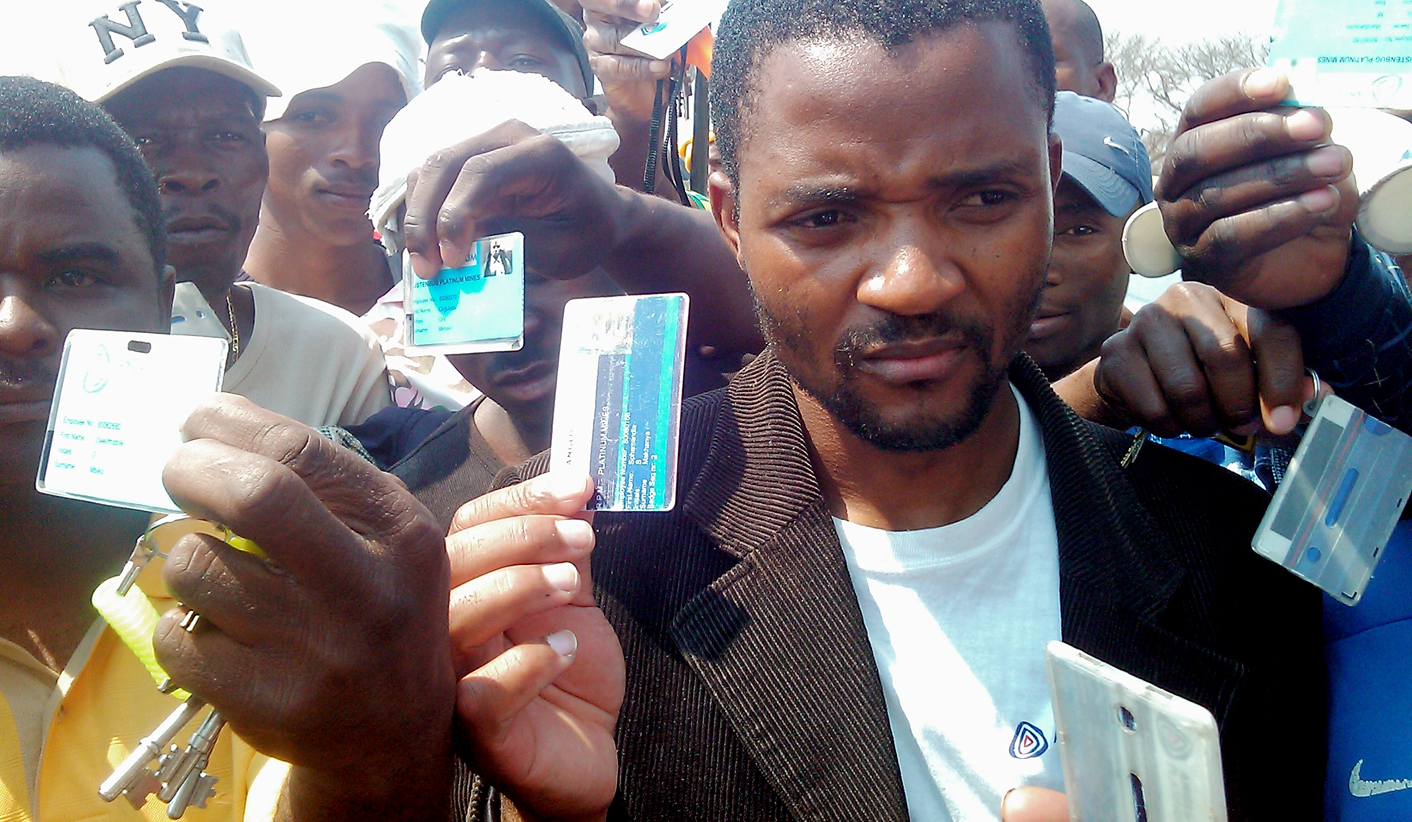 Workers of Anglo Platinum Ltd and other companies have gathered outside the Bleskop mine to demand a R16,000 wage package from the company. If it can’t give it to them, they say, then the government should nationalise it. And no, there is no connection to the Marikana strike at Lonmin, they claim. By SIPHO HLONGWANE.

The string of mining strikes that began earlier this year at Impala Platinum in Rustenburg has now spread as far as the East Rand and Westonaria. The centre of it all has been the Wonderkop or Nkaneng near the town of Marikana, where the police shot 112 miners on 16 August, and a stand-off between Lonmin PLC and striking miners has prevailed ever since. This week, another wildcat strike began at the Anglo American Platinum (Amplats) operation 20 kilometres east of Rustenburg and about 20 kilometres west of Wonderkop.

Depending on whom you asked, this new strike was either connected to Marikana and led by disgruntled Amplats workers, was a separate action, or was not a strike at all but rather a shut-down by the company to protect employees who were being threatened by other people on strike.

“Anglo American Platinum would like to report that its Rustenburg mine employees are not on strike. We are aware of widespread cases of intimidation which have been reported throughout the Rustenburg area. We confirm that yesterday, some of our employees were unable to clock in for night shift due to fear of intimidation and threats by unidentified individuals in and around our Rustenburg operations. To ensure the safety and security of our employees management took the decision to re-direct employees to a neutral place. Our priority is to ensure the safety of our people while we find solutions to address the situation. We will provide update information as it becomes available,” the statement said.

City Press reported that Marikana workers had formed a “war committee” with other striking miners in the area, which included those from the Bleskop operation.

A different picture emerged Thursday at the Bleskop stadium, however. Two machine operators and a team leader interviewed outside the stadium said their strike was unconnected to Marikana.

“No, that (the strike by Marikana workers) is a different one. We are from Anglo,” the team leader, who identified himself as Thulani, said.

About 4,000 miners were gathered in the stadium, where some leaders spoke. There were a few police patrol vehicles in the area, and at least one armoured truck belonging to a private security company, but the atmosphere there was considerably less edgy than at Marikana. Random individuals gave interviews gladly; the fierce paranoia and tight control of whom the journalists could approach was absent. After the speeches, the crowd dispersed quite rapidly, though most milled about both inside and outside the stadium. There were almost no traditional weapons to be seen, though a very small number carried sticks.

Sphamandla Makhanya, a winch operator, gave a breakdown of the wage package the workers demanded. He said they wanted a basic salary of R12,000, a R500 meal allowance, R500 “for working underground”, R60 a day for transport and other benefits, which added to R16,070 per month.

“If the company cannot do that we want a minimum of R12,500 a month. If they fail this demand then Anglo must go back to America and the government must take over this mine,” he said.

The crowd had people from Impala Platinum, Anglo Platinum, Lonmin, Murray & Roberts and some people who were contracted through other companies.

Makhanya said it was untrue that no Amplats workers were on strike. He and several other people in the small crowd gathered around him showed cards identifying them as employees of Amplats.

The Commission for Conciliation, Mediation and Arbitration (CCMA) has reportedly tried to broker a deal between Amplats and the workers.

“CCMA has proof that we are Anglo workers,” Makhanya said. “The company sent us a message to us to come back to work. Why would they ask us to work if we are not their workers?”

Company spokeswoman Mpumi Sithole said Thursday the company now knew that a small number of employees had joined the strike. She could not provide a percentage of the workforce that was on strike.

“The closure yesterday was due to information that came to the company about workers being intimidated. So the operation has been closed since then. We therefore can’t tell you exactly how many are on strike,” she said.

It was also not possible to determine where the intimidation was coming from.

Sithole confirmed that a negotiation was underway and that no unions were present. A hearing is scheduled for 25 September.

With the police seemingly happy to keep a small number of patrol vehicles in the area, they and the company were playing the waiting game. The strategy works here because of the willingness by the miners to negotiate and the fact that Amplats reached out quickly with an offer to talk. These two conditions were missing at Marikana. DM

Photo: Winch operator Sphamandla Makhanya talks to journalists at the Bleskop stadium, near the Anglo Platinum’s Bleskop mine. He said that workers from several mining and contracting companies in the area were striking together. Sipho Hlongwane/DAILY MAVERICK