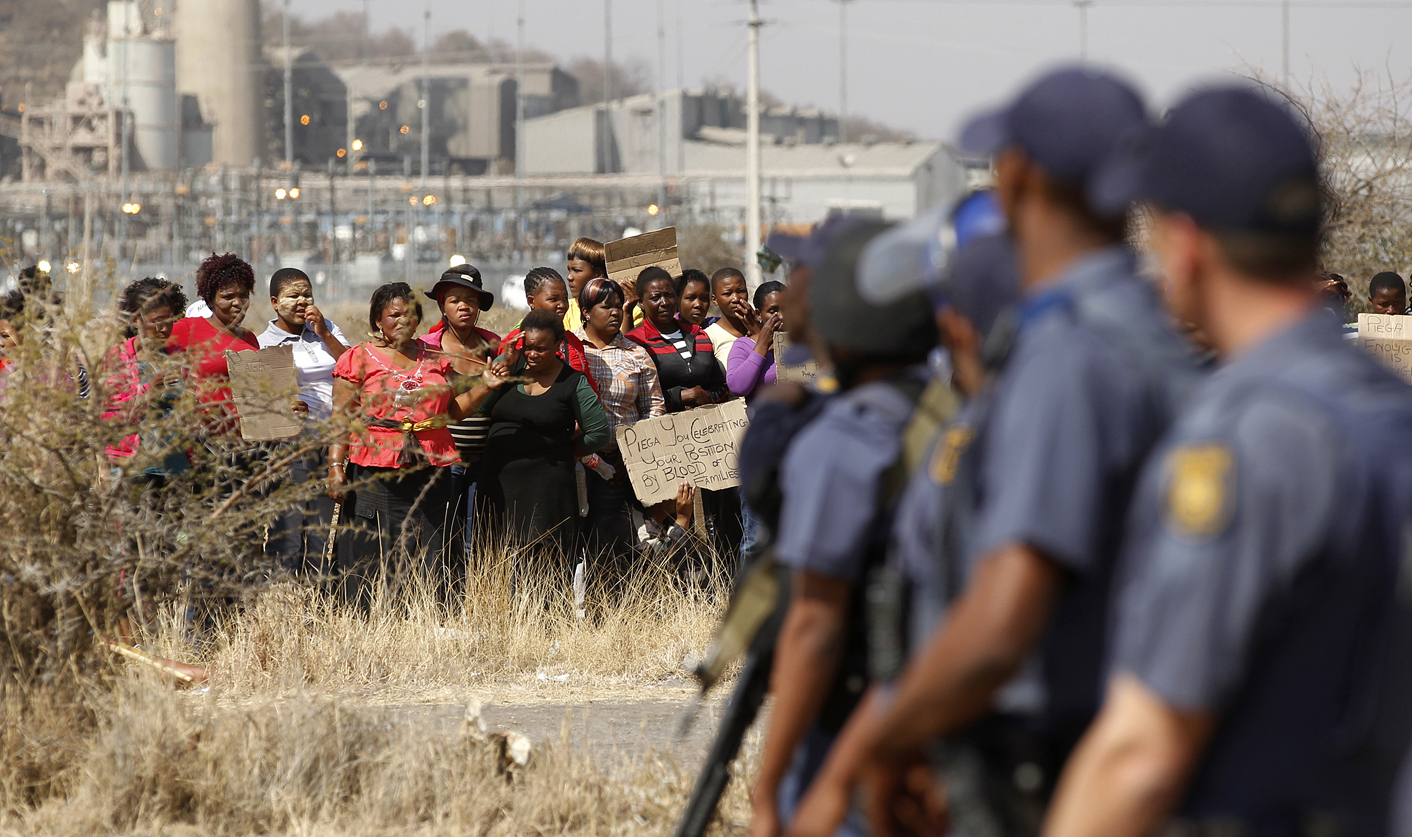 KHADIJA PATEL spoke to Kofi Kouakou, a scenario planner at the University of the Witwatersrand, about mapping future scenarios for the mining industry in South Africa, as well as the ripple effects of continuing standoff in Marikana on the rest of the country. The emerging picture is not pretty, with ramifications looming in other mines, other industries, and all the way to Mangaung.

When Zhou Enlai, Premier of the People’s Republic of China from 1949 to 1976, was asked about the historical impact of the French Revolution of 1789, he is said to have remarked, “It is too soon to say”.

After the killings of 34 mine workers by police on August 12 in Marikana, questions abound about what impact the massacre will have on the mining industry, the South African economy and the political playground. But we have no clear idea yet – and it’s likely we won’t for some time.

In our current state of affairs, we simply cannot afford to shrug and say we don’t know; there has to be some kind of strategic approach to our immediate future. As Lawrence Wilkinson of Global Business Network, a leading network of scenario planners, was quoted as saying by the South African presidency: “Scenario planning derives from the observation that, given the impossibility of knowing precisely how the future will play out, a good decision or strategy to adopt is one that plays out well across several possible futures.”

Kofi Kouakou, a scenario planner at the University of the Witwatersrand, says that in July already there was a sense of something insidious brewing in mining. “Already there was an eerie sense that something was about to happen, but people prefer to be positive so anything that’s bound to take place, if it’s a nasty thing they don’t want to hear it,” he told The Daily Maverick. So in the spirit of keeping eyes open wider in the future, here follows his take on the impact of Marikana.

Daily Maverick (DM): What are the possible scenarios for the industry, and the country, as the situation currently stands?

Kofi Kouakou (Kouakou): The key thing that emerged from the Mining Dialogues 360 in July was that the current impasse could be seen coming. Moreover, it was clear that the future of mining in South Africa, and across the continent, is social – which means if you don’t address social issues, the driving forces for tomorrow, there will be trouble. And if that happens then you’re moving to a “low road” or worst-case scenario.

DM: What is the worst-case scenario then?

Kouakou: Because of the nature of the poor social conditions that miners are living in and worst of all, the fact that 34 people were killed, waiting for four months to get a report back from government on what actually happened is a disaster. Everybody will be waiting to get the report and in that vacuum, someone will have to fill it for information and speculation. And that’s already happening. Everybody’s trying to speculate now. By the time that report comes out, it’s beyond Mangaung. It will be a worthless report – it will lose any sense of urgency.

People will be unhappy and it could lead to something worse – something I call ‘Marikana 2.0’ which means there will be a contagion of what is happening in Marikana. As much as we don’t see it yet, the potential for flaming is there. There will be more protests, more strikes. And if that happens, the consequences will be very bad again.

People are still trying to tone [Marikana] down but the underlying conditions are terrible. The people’s morale is down. And in the meantime the leadership vacuum is increasing.

DM: And the best-case scenario?

Kouakou: Lonmin will have to realise that they have to accede to the demands of the strikers. However, if they do that, they will be perceived to have given in and across the board, all across the industry, other miners may demand similar raises. And many people are not ready to give such raises, but Lonmin is not losing anything. If they give the raise, they calm people down. Obviously if this happens, the National Union of Mineworkers loses face because AMCU, who are not even a recognised union at Lonmin, would have outweighed them – and this could have effects on NUM within Cosatu and its alliance partners. Still, the best-case scenario would be for Lonmin to give the raises, calm the people down and control the contagion of the strike. The longer it goes on, the potential for escalation is greater, but Lonmin can afford this raise.

But also government, labourers and the industry have to come together to figure out a way to reduce most of these social ills [plaguing the communities] and not just talk about it, but pay people what they deserve. Workers don’t want the same salaries as executives, but they want at least to work in decent social conditions – decent housing, safe places to live with their families. This is the only “high-road” scenario. It is tied to the social conditions of the workers. So here, mining has a social future.

DM: What needs to change structurally to stop the spreading of the strike to other industries?

Kouakou: The link between all these things brewing up is [the state of] social conditions. Being in the mining sector, or telecoms, or you have monopolies in the banking system, or in the transport sector with the possibility of e-tolling – people are just struggling, socially and economically. They are not making it. So even though all these sectors don’t appear linked when you have a burning fire in the mining sector and nobody is putting it out, it will spread, because the conditions there are present elsewhere. I think one sector that is about to flare up is energy, with increasing fuel prices, but I anticipate a riot against Eskom. It’s not a revolution, but there is a contagion that is going to balloon across the board.

DM: Is there any sense yet of which of the two scenarios we are about to see take place?

Kouakou: We can already see that the low road scenario is plausible all the way through to the Mangaung conference.

DM: So Marikana is set to influence Manguang strongly?

Kouakou: I was in Mangaung a few weeks ago to look at the sign posts, to speak to people, to see how things are shaping up, and there’s an eerie feeling there that something big is going to happen. Posters have not been put up yet and people are going about their own business, but you know something big is going to happen. I don’t usually make predictions, but I predict [that] Jacob Zuma will not be re-elected as the ANC leader in Mangaung. DM

Photo: Police look on as women carry placards in protest against the killing of miners by the South African police in Marikana, August 17, 2012. REUTERS/Siphiwe Sibeko