‘Make the mines ungovernable’: Malema and the language of the Struggle 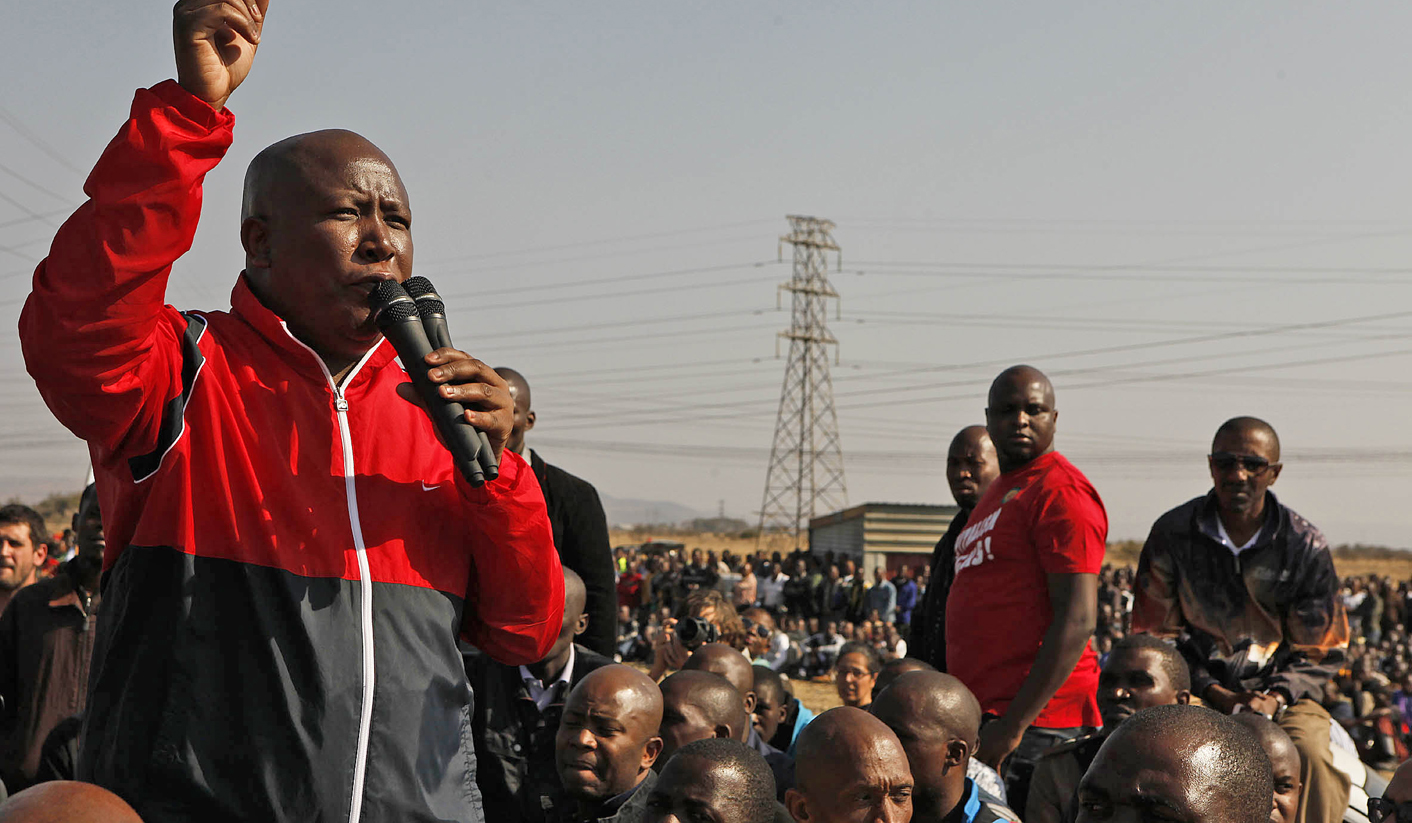 Expelled ANC Youth League leader Julius Malema has moved swiftly from striking miners in Marikana to another group of disenfranchised workers. He addressed workers from the liquidated Aurora mine on Thursday, urging them to fight for their rights and unite to "make the mines ungovernable". By KHADIJA PATEL.

Expelled ANC Youth League leader Julius Malema appears to have developed a fondness for the word “ungovernable”. On Thursday he rallied workers at the Aurora mine in Grootvlei, Springs to render the country’s mines ungovernable. “We are going to lead a mining revolution in this country… We will run these mines ungovernable until the Boers come to the table,” he said.

Malema’s speech to the Aurora workers is not the first invocation of ungovernability in the country in recent weeks.

Last month the ANC Youth League in the Western Cape’s Dullah Omar Region delivered a memorandum to the office of the premier, Helen Zille, demanding that services to townships be improved. “We demand that our demands be positively responded to within 7 working days. Failure to do so [and] the young people will make this city and province ungovernable!” the memorandum said.

In August 2011, Andile Lungisa, the chairman of the National Youth Development Agency, threatened to make the country “ungovernable” in response to  the high rate of youth unemployment. In June of 2011, protests against corruption in the local government in Pitermaritzburg also threatened to render the city ungovernable. “ANC activist Nana Mnandi, who spoke on behalf of protesters who are staging a sit-in at the ANC offices in Jabu Ndlovu Street, said they were willing to bring the city to its knees and render it ungovernable unless their concerns about corruption were addressed,” the report said.

The word “ungovernable” and its attendant is, however, not new to the political discourse of the country.

It was in the early 1980s that Oliver Tambo first issued a call to “render South Africa ungovernable” – a concept historians reckon was originally conceived by Thabo Mbeki. Credit for conception quite aside, calls to render the country ungovernable proved to be a fundamental. After the proclamation of a state of emergency in 1986, Tambo reiterated the call, saying, “We have to make Apartheid unworkable and our country ungovernable. Prepare the conditions for the seizure of power by the people.”

Writing in Sunday World earlier this year, Inkatha Freedom Party leader Mangosutho Buthelezi said calls by the ANC Youth League to render the Western Cape “ungovernable” ought to be understood in reference to its historical usage within the ANC.

“This is, of course, not the first time the ANC has threatened to make South Africa ungovernable. When these threats first emerged in the 80s, they proved to be anything but empty. Chaos descended on our country,” Buthelezi wrote.

Malema, of course, did not speak on behalf of the ANC when he addressed the Aurora workers on Thursday, but his invocation of “ungovernable” is deeply tied to the significance of the word in the history of the ANC.

Buthelezi explains what exactly this history is. “At that time the ANC’s campaign to make South Africa ungovernable sprang from the injustice of the Apartheid system under which we lived. It was a reaction to inequality, inferior education for the black majority, disenfranchisement and the countless indignities that were visited upon our people. The demands behind the ANC’s threat were political liberation and democracy,” he says in his Sunday World column.

Malema, from his side, is also using the ANC’s history to assert himself as the party’s true leader. It’s little wonder, then, that Malema directly attacked President Zuma in his speech on Thursday, alleging that the president had been bought by white mining capital who donated money to Zuma’s trusts and foundations.

“Why do they pay money? That is a protection fee,” Malema said.

“When President Jacob Zuma came here, he left and his nephew came to the mine. He [was] looking for business opportunities to see how [he could] get in. If you can’t trust your president, who can you trust? Everybody is a sell-out,” Malema is reported, by City Press, to have said to applause.

“We thought it [life] was going to be better after 1994. We are worse [off than] during the time of Apartheid,” said Malema.

“The revolution is leaderless. If there was leadership in this country it can’t take four years [to pay mineworkers],” Malema said.

That Malema made these comments to workers at the Aurora mine is especially significant. Aurora Empowerment Systems bought two mines, one in Springs and the other in Orkney, North West, when the previous owner, Pamodzi Gold, went into liquidation in 2009. Since then, workers have not been paid and the mines have been stripped of assets. Some 5,000 people have been left jobless.

Ebrahim Fakir, political analyst and manager of governance institutions and processes at the Electoral Institute for the Sustainability of Democracy in Africa, told Daily Maverick that Malema’s call for the Aurora workers to unite and demand their rights was credible: “Yes, they must unite and fight for their rights but the rest of the (call) is terribly irresponsible,” he said. “The Aurora workers have a credible, legitimate case (against their former employers).”

In one week, Malema has gone from addressing a memorial serivce in Marikana, where miners are embroiled in a wage battle with Lonmin, to the Aurora workers.  “In both cases he is sensitive [to the fact that] people are particularly angry at the president,” Professor Adam Habib noted. “He is trying to deligitimise the president.”

“Clearly Malema believes Zuma’s weak spots were revealed with the Marikana massacre, and he believes people around Zuma, people close to him, may be implicated.

“He is obviously manipulating the situation, but it was very prudent of him to highlight that Cyril Ramaphosa was a shareholder in Lonmin”, said Habib.

Fakir agrees that Ramaphosa’s involvement in Malema’s disciplinary process and resultant expulsion have been crucial to Malema’s burst of activity in the last two weeks. “It is not insignificant that Cyril is a board member of Lonmin,” he said.

“His appeal is connected to the polarities of South Africa. “Clearly this is a guy who is willing to risk industrial relations and social relations for cheap politicking.”

In the meantime, the great spectre of Malema’s power continues to rise on the back of speeches like the one he delivered to the Aurora workers and his ability to speak to the disgruntled workers. The appearance of taking up their plight lends greater credence to the theory that Malema has been empowered by events in Marikana.

Professor Habib, however, is keen to distinguish exactly what kind of power it is that Malema has. “Malema did not have systematic power previously, he had institutional power from within the ANC.

“It allowed him to be a kingmaker.

“That power has eroded. What he now has is the ability to exploit vulnerabilities.”

Habib stressed as well that Malema’s appeal was inextricably tied to the socio-economic inequality that marks life in South Africa. “His appeal is connected to the polarities of South Africa,” he said. “There is a rage building at the base of society and whether it is Malema or anybody else, as long as society is unequal the situation is vulnerable.

“Julius is tapping into spaces of discontent,” Fakir added.

And until such time as these people feel as though they have avenues for redress, Malema will be able to call on the language of the Struggle and invoke historical calls to make sectors of society ungovernable, because for many South Africans such language is a reminder of how little change the end of the Struggle brought them. A good strategy indeed. DM