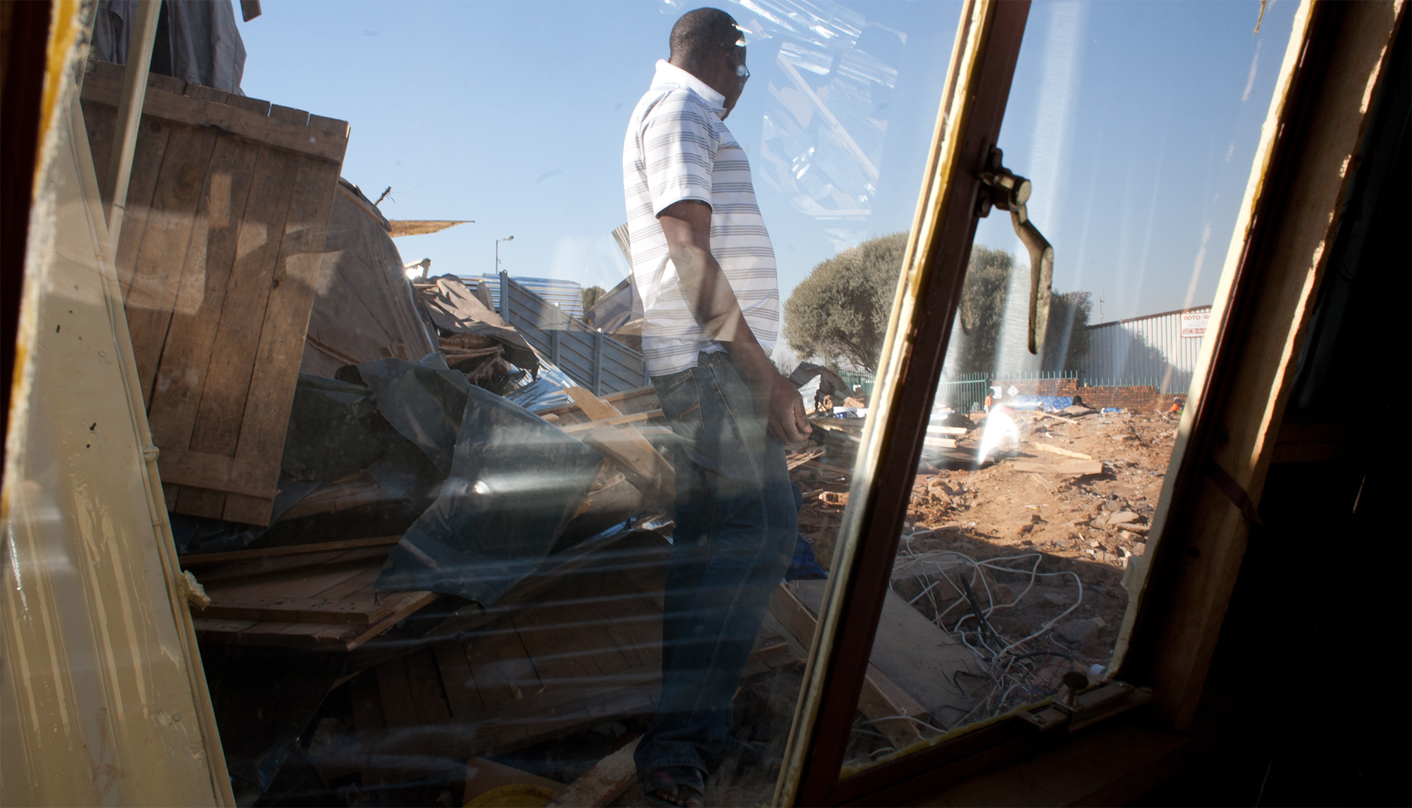 After protests against evictions in Marlboro last week cast fresh scrutiny on the legality of the evictions themselves, lawyers and NGOs working in the area warned that the legal challenge against the evictions masked a far greater problem: namely, the severe shortage of housing in Alexandra and the spill-over into neighbouring Marlboro. By KHADIJA PATEL.

Last week, Marlboro residents barricaded roads and burnt tyres in protest against illegal evictions in the area. In the last two months, the Johannesburg Metropolitan Police Department (JMPD) has cracked down on a community of shack dwellers in Marlboro, evicting residents without court orders and with little warning. According to estimates from NGOs working in the area, over 1,000 families have lost their homes in the crackdown.

On August 17, the Marlboro community filed a complaint against the City of Johannesburg and asked the Johannesburg High Court for an interdict to stop all other evictions in the area and for the City to rebuild the structures that were torn down, pending the outcome of legal action.

The case was, however, postponed until August 29, and in the meantime the judge ordered that those affected by the eviction be permitted to return to the disputed properties. “The City interpreted the ruling to mean that people [could] return to the property but they could not erect any sort of shelter,” explains Louise du Plessis, an attorney with Lawyers for Human Rights, the organisation representing the affected Marlboro communities.

Shortly after residents returned to the property, JMPD also returned, tearing down the makeshift structures people had erected for shelter. Last Thursday, Du Plessis was back in court to seek further clarification from the judge on whether the residents who were allowed to return to the property were also allowed to erect shelters.

Lawyers say JMPD are acting in contravention of the Constitution, the country’s eviction laws and a temporal interdict against evictions in the area, but the police insist they are merely enforcing by-laws against trespassing on private property. Du Plessis says that among those who lost their homes and belongings in the eviction were people who had been moved to the area after earlier evictions elsewhere in Marlboro. “Two groups of people who were evicted from other properties in February and (last) November had been moved to this property,” she said. But also among them are residents who had lived on the property for at least seven years and had at various times even paid rent to people purported to be their owners of the property. “If they have been trespassing, then some of them have been trespassing for the last seven years,” she notes.

“This Marlboro community has been in discussions with the City for three years,” says Walter Fieuw, a research and documentation officer at the Community Organisation Resource Centre (CORC). “After a series of evictions in 2006, residents had received a written commitment from the City that it would work them to find housing solutions.”

With the decline in industrial activity in the late 1980s, factory owners in Marlboro rented out their vacant buildings to families searching for better housing conditions. In a blog post for Shack/Slum Dwellers International, Fieuw quotes Charles, a community leader in Marlboro, who claims residents at these factories had initially responded to advertisements of living spaces. “The history here is actually that people started staying in these factories. They were renting because some owners advertised for rentals. So the people came in their numbers. But later on, the City actually gave some court orders that people had to vacate. We boycotted that and went back to the owners and they ran away and stayed with the City. We had a media statement that says we can not be moved from these areas unless they have an alternative. So that is how they started staying in these buildings,” Charles told Shack/Slum Dwellers International.

Yet on 13 August, heavy machinery rolled into Chico’s Ice Cream Factory in Marlboro, which was home to 109 families, or 282 people – one of 53 communities living in derelict buildings in Marboro who were enumerated by CORC in 2011. “The community also entered into a partnership with the University of Johannesburg’s architecture and design departments and they created virtual studios to find solutions for some of the challenges facing the community in their living quarters,” Fieuw says.

He believes that as well as being illegal and an indictment of the City’s callousness in failing to provide alternate accommodation to the affected communities, the evictions also reveal contempt for the work done between NGOs and the residents. “There is a disregard for collaboration,” he says.

“It’s very strange that the (eviction) order did not come from the Department of Housing (Human Settlements),” Fieuw says.

“It’s not coming out who JMPD is acting for,” Du Plessis adds.

These details, however, are set to pale in the legal battle between the community and JMPD over the legality of the eviction. Whatever the result, a  court victory will not necessarily have a positive effect on the living conditions of the informally-housed community in Marlboro as a whole. “The bigger story here is is the huge numbers of people living in Marlboro because of the housing backlog in Alexandra,” Du Plessis believes.

Researchers warn that the number of people living in so-called “informal settlements and backyard shacks” across South Africa has been increasing in recent years.  And in Johannesburg, the bleeding economic heart of the country, the dire shortage of urban housing for the poor is growing faster than the government response. It is estimated that between 150,000 and 220,000 households live in informal dwellings in the city. The challenge to government to provide adequate housing alongside other basic services to these households is immense.

Housing policies and strategies in contemporary South Africa have been hailed by development pundits as “progressive” and pro-poor housing policies and strategies in Johannesburg have been listed as one of the “best practices” worth copying in South Africa by the likes of the Development Action Group. Despite the gains made, however, the challenges to significantly and sustainably resolving the housing shortage in Johannesburg – and the rest of the country – remain daunting.

And as government battles to respond to the sheer scale of need for urban housing for the poor, the forceful eviction of the urban poor from informal housing settlements is growing increasingly unpopular. The Johannesburg Inner City Regeneration Strategy Business Plan recommends the closing down of “bad buildings”— a euphemism for getting rid of the building’s occupants and preventing further occupation by the homeless. And in Marlboro, this strategy has repeatedly caused ripples of violence that threaten to grow worse as no solution to the crisis is found.

According to media reports, in August 2005, police used stun grenades to quell an angry mob in the suburb of Marlboro in north-eastern Johannesburg – a mob that was protesting against the eviction of residents who had long occupied empty factories in response to the housing backlog in neighbouring Alexandra.

In October 2008, City Press reported a meeting between residents and City officials in Marlboro after more than 500 Marlboro residents marched in protest against the lack of housing in the area. The protesters gathered at different intersections near Alexandra and barricaded roads with burning tyres.

But just as the cycle of protest and violence seen in recent weeks recalls past incidents, so too the legal action has also all been done before. In 2007, after an illegal eviction at a factory in Marlboro and the protests that followed, the Anti-Privatisation Forum, representing the Marlboro community noted that this cycle is directly attributed to government’s failure to find alternative accommodation for the Marlboro community. “Not surprisingly, though, since the High Court order in 2005, the government has not built any houses for the community and has done nothing to find alternative accommodation,” it said in a statement.

In July, Co-operative Governance and Traditional Affairs Minister Richard Baloyi said, in a joint statement with Minister of Human Settlements, Tokyo Sexwale, that government understood the perception of poor service delivery. “The image of municipalities and traditional areas is defined, to a certain extent, by whether we are able to deliver on human settlements,” Baloyi said.

On the City’s website, Liziwe Ntshinga-Makoro, the director of Region E, which includes both Marlboro and Alexandra, lists “a housing backlog in Alexandra” as well as “a rise in illegal occupation of land in Malvern and Marlboro South” among the “key issues” facing the region. There certainly is an awareness of the problem, but City officials appear dumbfounded regarding what exactly to do about it.
Speaking to IOL, ward councillor Deborah Francisco was bleak about the prospects of a resolution to the ongoing crisis in Marlboro. She said that during her campaigning to become a councillor, she addressed the issue of housing with the residents and warned them to not allow the shacks to get out of control, according to the report. “I feel sorry for the innocent people that are involved, but where are we going to relocate them, because Alex is overcrowded as it is?” Francisco asked.

In the meantime, Fieuw believes that the housing crisis in Alexandra and Marlboro continues to be ignored at the peril of law enforcement agencies and local government. “It is a humanitarian crisis,” he says.

But perhaps, as the old adage goes, there must be a will to have a way, and so the solution for the Marlboro crisis may well lie in finding greater political will to point the way forward. DM