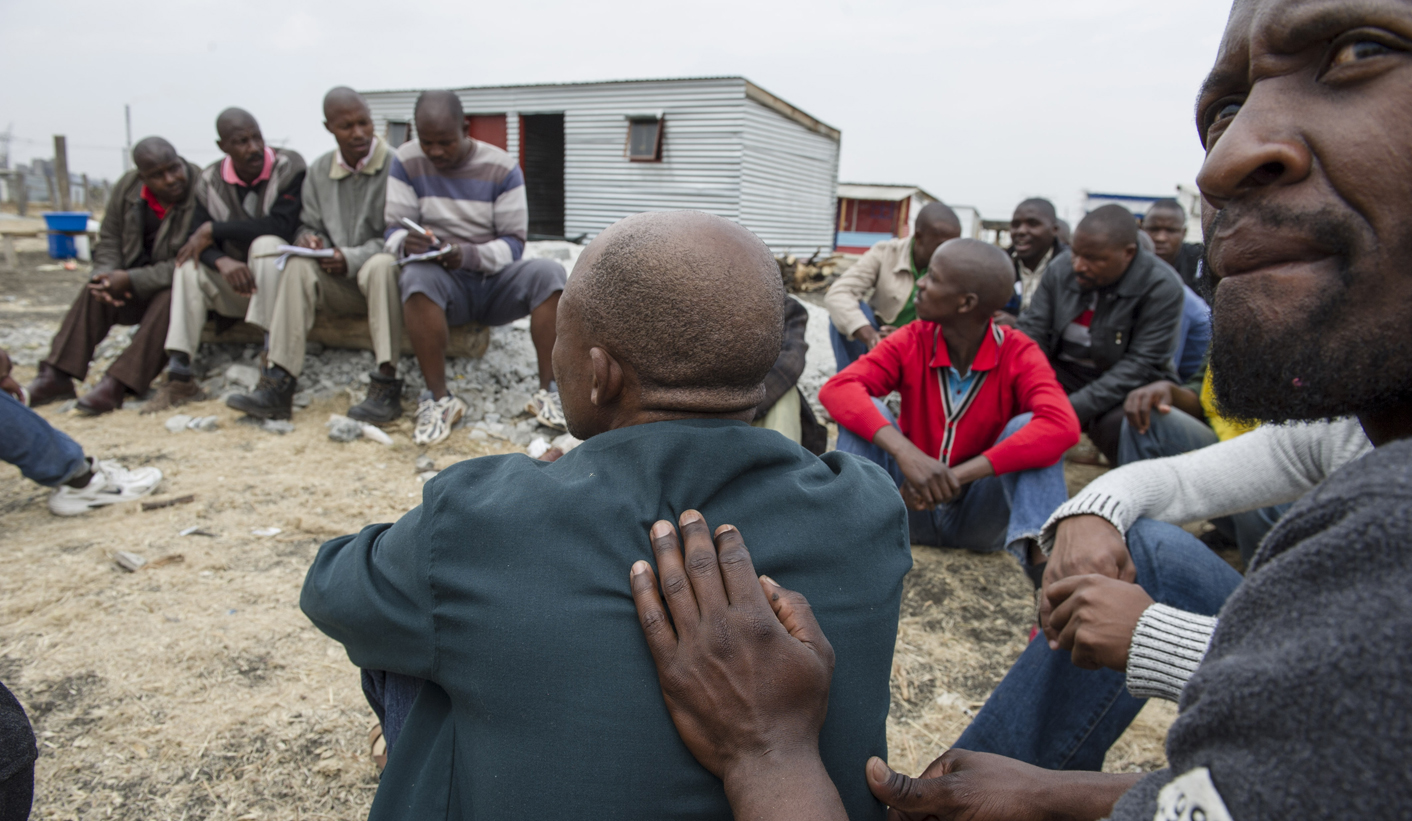 On Monday, the wildcat strike at Lonmin PLC’s Marikana mine continued as rock drill operators gathered at their usual meeting spot. The old tensions with the police were still high, but there were signs of creeping disagreement as to why the strike is still ongoing. By SIPHO HLONGWANE

On Monday, the rock drill operators on strike in the Wonderkop squatter camp near the Marikana mine of Lonmin PLC met once again. The affair promised to be quite uneventful early on in the morning as the men congregated in small numbers.

The mood in the early morning was relatively relaxed. The men weren’t being made to sit in a large group like usual, and the tight control on the flow of information to outsiders was not evident. The arrival of the Nyala (armoured trucks) changed that. The men reverted to the aggressive stance for which they have become known. A group broke off to sing and march in the direction of the cops, before demanding they remove themselves. Eventually a compromise was struck that saw the three trucks move some distance away, but remain in eyesight.

It wasn’t clear what the police wanted. At first, their approach and the presence of a spotter helicopter above suggested they wanted to prevent another meeting from taking place. The purpose of the encroachment was evidently a reconnaissance mission (apparently a known criminal was hiding in the squatter camp), but it was unwelcome in any case.

Two strike leaders then proposed two different responses: one group immediately organised itself into a tight formation that sang songs about one of their leaders who was killed by the police on 16 August. They marched right to the police, waving them away while doing so. Another group gathered around the microphone and speakers that were set up to hear another leader speak. He encouraged the men to pray, sing Nkosi Sikelel’ iAfrika and then sit quietly. He called to the other men to do the same, saying the police were there to distract them from their strike action and should therefore be ignored.

“Those police say that we are violent. Let us not prove them right,” the man on the microphone said.

He was ignored for quite a while, as several men from the other group shouted at those standing quietly to join them in antagonising the police. “Have you forgotten that some of us have died because of these police,” the men shouted.

Heavily outnumbered by those who wanted a more peaceful demonstration, the marching men eventually agreed to settle down.

It was a rare public display of disunity among the core group of men leading the strike.

However, the demand for a R12,500 net wage still stands, as does the call for all prisoners to be released.

Meanwhile, in the Ga-Rankuwa Magistrate’s Court north of Pretoria, one batch of the 260 arrested miners appeared before the court. The prosecution called Brigadier Jacobus van Zyl to testify on its behalf. The head of the Potchefstroom detectives testified that the investigation was still ongoing as the addresses of the men were being verified and previous criminal infringements being checked. Four of the men have pending criminal cases, he said.

Van Zyl testified that the cops had tried to get the men to disperse and “leave behind the dangerous weapons they were carrying”, but that they had not cooperated.

The State is asking for another seven-day postponement to continue the investigation and, perhaps, lay more charges.

Back at Marikana, miners continued to contradict the police version of events, claiming they were either corralled with barbed wire into an ambush or hunted down by Nyalas and helicopters and murdered. At another rock outcrop near the one the miners were chased from on 16 August, bright yellow markings (possible location of bodies) and blood stains were still visible Monday, some tucked into deep clefts in the rock.

The sheer scale of the violence on that Thursday united the men in outrage, but it seems now that there is disagreement over what to focus on as the days drag on. Those with more traditional roots seemed more eager to continue expressing their anger at the death of one of their leaders (whom they called Mambushi), while those with open Christian leanings wanted to go back to demanding for R12,500 in net wages.

Since the strike started and the rock drill operators rejected union leadership and reverted back to tribal structures, there have been attempts to reconcile all the cultural observances. But this has meant meetings drag on as every group is given a chance to speak. It became a tedious affair Monday, and by midday it was clear the meeting had no agenda and there was nothing left to decide.

As the strike continues, the number of miners present is dwindling and the frustration is increasing. A few Lonmin employees were caught going to work, and their work cards were confiscated. At the meeting, the card numbers were read out for the owners to come and collect—in front of all the striking miners. It was an intimidating move, and unsurprisingly, nobody stepped forward.

It may be that the miners will feel at some point that their numbers are so few that some kind of grand gesture is needed again, or the police will have the confidence to arrest the lot without killing anyone again. For now, it is still a waiting game. DM

Photo: The family members of striking Lonmin platinum miners who were killed by police gather to make funeral arrangements. Most of the miners are still on strike, asking for a wage of R12,500 before deductions. Photo by Greg Marinovich