Lance wins by losing: Cyclist will not contest doping allegations 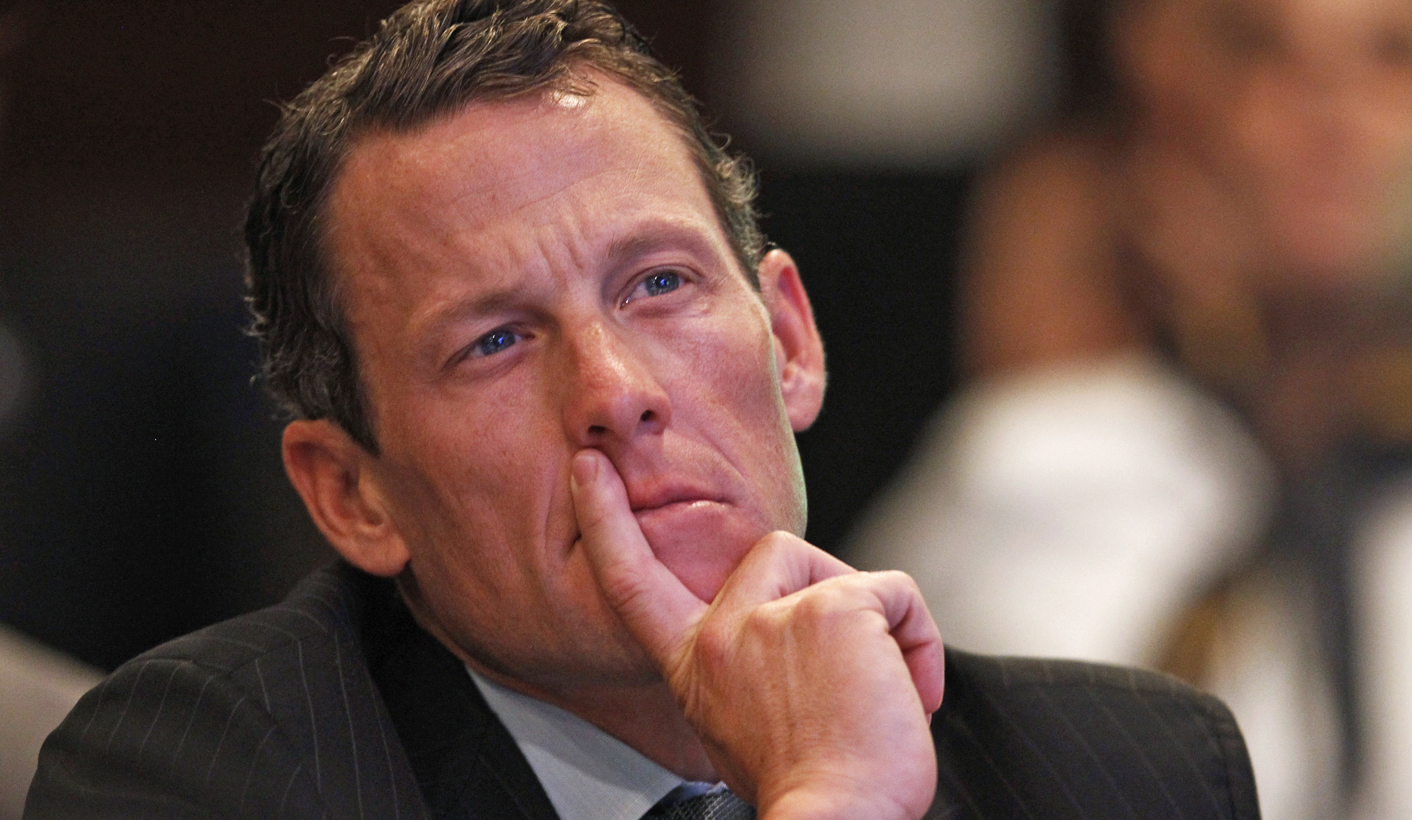 Think of it as a feint at the top of an alpine climb: just as your opponent is about to pip you at the finish line, you fake injury. When he looks over in concern, you puncture his lung with a rusty spoke. The game is always played Lance’s way. His capitulation to the US Anti Doping Agency is no exception. By RICHARD POPLAK.

This Facebook status update was posted by none other than my sister. That Lance Armstrong should divide families as surely as he divides the rest of the species should come as no surprise. Where my sister sees a heroic cancer survivor and the greatest athlete of all time hounded by an unconstitutional bureaucracy with an axe to grind, I see an unrepentant dope fiend with a nacho Jones. Where she sees a proud man giving the middle finger to the Man, I see the Man giving the middle finger to justice. As ever, Lance Armstrong is a polarising figure. I’m not looking forward to the next family Shabbos dinner.

On Thursday, Lance Armstrong issued a statement. It is a masterful piece of defiant petulance, a slice of boilerplate Lance-ian bravura that in effect creates its own alternate planet, with its own atmosphere, its own gravity force and its own set of plasticine moral principles. Behold:

“There comes a point in every man’s life when he has to say, ‘Enough is enough.’ For me, that time is now. I have been dealing with claims that I cheated and had an unfair advantage in winning my seven Tours since 1999. Over the past three years, I have been subjected to a two-year federal criminal investigation followed by Travis Tygart’s [head of the USADA] unconstitutional witch-hunt. The toll this has taken on my family, and my work for our foundation and on me leads me to where I am today—finished with this nonsense.”

In other words, another day in LanceWorld. For Lance apologists, the USADA allegations were never going to sway opinion. This was the equivalent of Al Capone being busted for spitting on the sidewalk: no smoking gun, no hard evidence, just a bunch of testimony from athletes so rotten they make Lance look positively saintly by comparison. Tyler Hamilton and Floyd Landis are two of the most disgraced US athletes in recent history—to Lance-heads, their testimony is worth less than the paper it’s printed on. Lance’s backers paint both men as soap opera villains, trying to drag down a hero in order to tamper their own ignominy.

But this is how the justice system in America works. Forget America, isn’t this how Jackie Selebi was brought down? You use a worm to catch a barracuda. That redeemed worms like Jonathan Vaughters, who runs the cleanest ProTour team in Garmin-Sharp, have thrown their testimonies in to the pool should count for something. But it doesn’t. The USADA allegations, following the failed federal criminal investigation shelved earlier this year, always looked unsatisfying to the layman. A syringe smeared with his fingerprints, or a YouTube video of his drinking a flagon of his own blood, or nothing.

The USADA maintains that Armstrong has been a systematic doper since 1996, and has boosted his performance with everything from EPO to steroids to blood transfusions. In this case, it was working off two “non-analytical” samples, blood tests from 2009 and 2010, that were “fully consistent” with blood doping. Busted? Not so fast.  “There is zero physical evidence to support (the) outlandish and heinous claims,” stated Lance. “The only physical evidence here is the hundreds of controls I have passed with flying colours.”

Lance’s legal team, who meticulously prepare his outraged statements, have always had a way with archaic adjectives; they are designed to portray his battle as Frodo vs. Sauron, a mythical fight for the future of hobbits. Over five hundred tests and never a positive one, insist his posse. The most tested athlete in history, bray his supporters. But Marion Jones never tested positive. Richard Virenque never tested positive. Jonathan Vaughters never tested positive. All eventually came clean, because the USADA’s allegations made them look stupid for doing otherwise.

No doubt about it, the USADA campaign has looked a little like a crusade. They have ditched their own statute of limitations, and ignored the protestations of the international cycling body, the UCI. As Lance noted, “At every turn, USADA has played the role of a bully, threatening everyone in its way and challenging the good faith of anyone who questions its motives or its methods, all at US taxpayers’ expense. For the last two months, USADA has endlessly repeated the mantra that there should be a single set of rules, applicable to all, but they have arrogantly refused to practice what they preach. On top of all that, USADA has allegedly made deals with other riders that circumvent their own rules as long as they said I cheated. Many of those riders continue to race today.”

Those riders include noted good guy Christian van de Valde, who will serve a six month ban after his season ends. And Lance calling anyone a bully, after the intimidation accusations he has fielded, sounds a little rich. But all of this means nothing really, because Lance has effectively outwitted the Tygart and Co. He has not admitted guilt, he has not owned up to anything. Stripping him of his seven Tour de France titles still has to pass muster with the UCI, who are battling to maintain the last shreds of professional cycling’s credibility, and are unlikely to approve the gutting of two institutions: the Tour, and the Cult of Lance.

Speaking of the latter, we turn once again to my sister’s Facebook status update. Lance Armstrong is more than an athlete. He’s an inspirational figure who had to fend off certain death, and then battle the Universe in order win the Great Race. He did this seven times! He is a proud Texan who is fighting an East Coast institution of suited weenies, a bunch of Big Government, Obamacare-backing hacks, looking to take down a giant to assuage the fact that they have fewer balls than a guy who was almost killed by testicular cancer.

In short, Lance’s capitulation was a political move, calculated to take back the reigns on a narrative that was getting out of control. Spun correctly, Lance’s team can sell this as another set of hurdles that their hero had to overcome on his way to the Presidency, another hardship in a life full of them. No evidence, just a witch hunt. Let’s get back to business.

And Lance Inc. is big business. Now that he will no longer be able to compete, he can concentrate on his real job. Like million dollar speaking engagements, evolving the Livestrong brand, and a political career. You thought Lance was finished?

“I believe in you, Lance.” Etch that on the man’s tombstone, should he ever need one. DM