Wildcat strike over at Royal Bafokeng’s platinum mine. How painless was that? 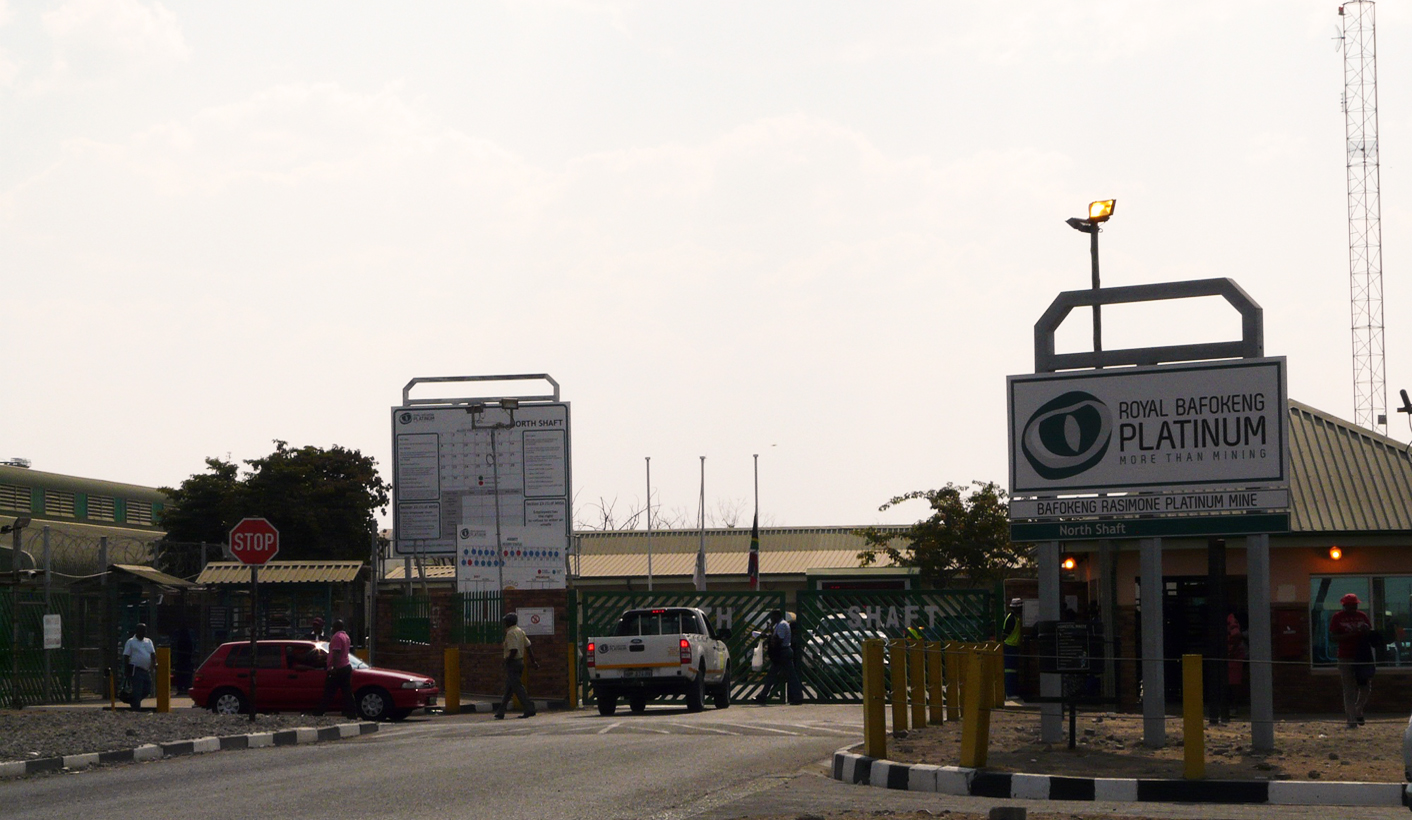 Just two days after it started, a wildcat strike at Royal Bafokeng Platinum’s mine just north of Rustenburg ended after the parties met. The lessons offered by Lonmin’s rival are as profound as they are simple. Never forget the little guy. By SIPHO HLONGWANE.

On Thursday, just 24 hours after Royal Bafokeng Platinum (RBPlat) confirmed in a statement that there was an unprotected industrial action at the north shaft of the Bafokeng Rasimone Platinum Joint-Venture, there was hardly any sign that anything untoward was happening outside the gates. People were moving in and out after the end of the morning shift and there was no sign of any tension or anger that might suggest that something was happening.

The only alert was a single police Casspir (armoured truck) that was parked some distance away from the gates. The security guard at the entrance of the mine said that members of the press were not permitted to enter the premises, but all striking miners were inside and holding a meeting with the National Union of Mineworkers (NUM). RBPlat spokesperson Kea Kalebe confirmed the news.

By nightfall, people connected to the matter said that the strike was over, a deal had been reached to the satisfaction of all parties, and workers had in fact returned to their posts on Thursday.

What overshadowed the strike at BRPM was the violence a week before at the Marikana shaft of Lonmin PLC, which saw 44 people killed, 78 injured and some 260 arrested. On the morning of the meeting at BRPM, a fiery memorial service was being held at the Wonderkop squatter camp, located just outside Lonmin’s mine.

Speaking to a few RBPlat standing outside the gates made the impression that the strikes at Lonmin and Impala Platinum (Implats) before that were an inspiration for a few hundred workers to down tools at RBPlats. “Nabo bafuna R12,500,” said one lady. (They too want R12,500.) That figure has been a rallying cry at Lonmin, as angry workers demand to have their net wages more than tripled.

According to three employees interviewed at RBPlat (all of whom declined to be named), the strike at the north shaft was initiated by rock-drill operators, the same group of people at the centre of the ferment, but other types of workers then joined. Most drill operators are hired on a short-term basis, and they wanted to be employed permanently at the higher wage level.

NUM is the majority representative union at BRPM, and thus the bargaining partner to RBPlat. The Association of Mineworkers and Construction Union, for so long a headache for both NUM and mining companies elsewhere on the Bushveld Complex (site of 80% of the world’s platinum reserves), barely has a presence at this mine.

In an interview with Daily Maverick on Thursday night, the NUM local secretary Jeff Moleke said that the only unions present at the table was his, and the Chemical Energy Paper Printing Wood and Allied Workers Union (Ceppwawu), which represents employees who work in the other areas of platinum production.

“We had a meeting today where the issues of the striking workers were raised. Ultimately we reached an agreement that means that the workers will go to work as from [Thursday],” Moleke said.

Without revealing the exact nature of the agreement, the NUM local secretary said that some of the complaints were dealt with right there at the table, but some solutions would happen in a staggered fashion.

One of the immediate interventions by RBPlat’s management was to lift the suspension of several striking miners.

“The situation was resolved to the satisfaction of all parties,” Moleke said. The violence at Implats and Lonmin was discussed and the workers were told that in a situation such as happened at the other two mines, where violence was ever-present, nobody would win.

“The issue of changing contracts to permanent employment was raised. Given the current economic conditions, management did not accede to that,” he said.

RBPlat could not be reached to confirm the end of the strike and the terms of the deal after the meeting ended late on Thursday.

The swift way in which RBPlat’s management responded to the wildcat strike stands in contradiction to the halting fashion in which Lonmin tried to deal with trouble at its mine. The small numbers of the striking workers along with the absence of a strong Amcu certainly helped; the immediate implementation of a timeline is what diffused the situation.

However, RBPlat’s real secret weapon is one long in the making, and shows how big a difference reaching out to uplift the lives of employees makes. Royal Bafokeng Holdings owns a 100% stake in Royal Bafokeng Platinum Holdings, which in turn owns 57% of RBPlats in partnership with Rustenburg Platinum Mines and publicly floated shares.

The RB Holdings company is an investment vehicle for the Royal Bafokeng nation, which mostly lives in Phokeng, near Rustenburg in the North West.

Platinum profits are invested in many social development programs, including infrastructure investments in all 29 Bafokeng villages, such as roads, street lighting, waste collection, electrification, and water provision. The dividends to the Bafokeng nation also fund healthcare delivery services, including ARV provision to more than 2,000 people and care for the elderly.

“Over the past three years, an ambitious education reform programme has been rolled out to 60+ schools in the region, including early childhood development, a 13th year programme for university-bound students, and a school nutrition programme,” said Susan Cook, an anthropologist working at the time as Research and Planning Executive in the office, in a separate interview with Daily Maverick.

The development of the Bafokeng Nation is measured against the Vision 2020, a guideline or set of principles that outlines short and long term plans for the Bafokeng nation. The plan seeks to make every member of the community self-sustained through education and skills provision.

The community buy-in is non-existent at Lonmin, where the workers complained that they were being fed into a machine with nothing to show for it. While RBPlats is a company created as an investment vehicle for the nation, and thus has an obvious social development mandate; and Lonmin is a company with shareholders in Britain, the latter’s failure to establish any sort of accord with workers or to invest in broad social development in the communities that worked in the mines would have ensured that there was zero trust to begin with. In such an atmosphere, big wage demands are not solved quickly and amicably. DM