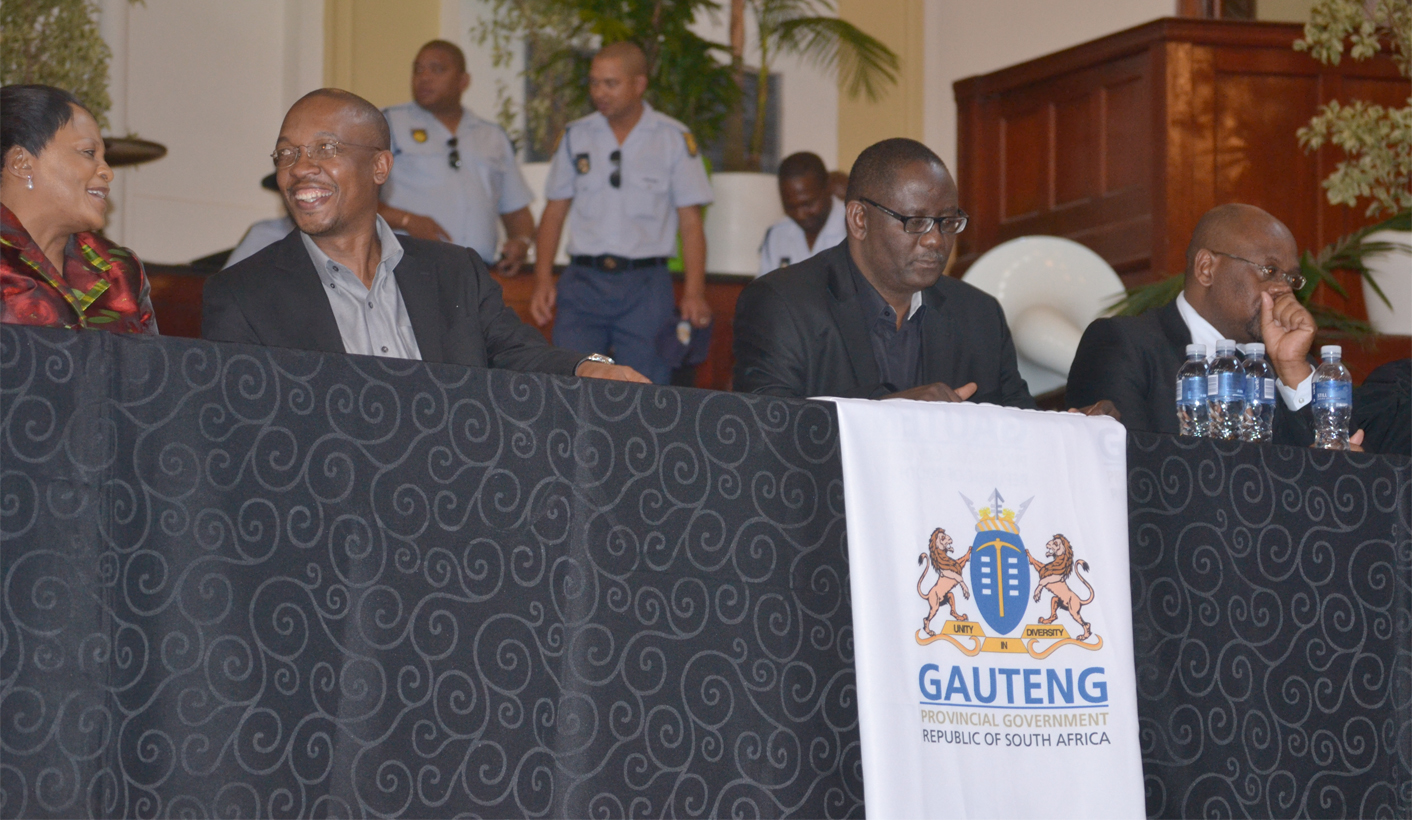 It was meant to be a memorial service, a ceremony held in honour of the victims of the police shootings in Marikana last week. But the Gauteng Provincial Government’s attempt at affording the victims some honour in death quickly denigrated into a political fight against the likes of Julius Malema. By KHADIJA PATEL.

As part of the national week of mourning for the victims of violence in Marikana, the Gauteng Provincial Government hosted a memorial service at the Johannesburg City Hall on Thursday. Vastly different to the the crowd at the University of Johannesburg on Wednesday night, the City Hall crowd was made up largely of civil servants and members of Cosatu-affiliated unions. And despite programme director MEC Lebogang Maile acknowledging family members of the bereaved in the audience, there was no indication if indeed any family members of the victims had travelled to Johannesburg for the memorial.

Most prominent, in fact, were members of the National Union of Mineworkers (NUM), the union that has earned the wrath of miners at the Lonmin shaft in Marikana. Seemingly unperturbed by criticism and widespread allegations that it had sabotaged wage negotiations for the rival Association of Mineworkers and Construction Union (Amcu) with Lonmin, NUM members arrived at the city hall upbeat.

The showing, designed to offer proof that the union deplored the violence in Marikana last week, had a political purpose as well. Not content with showing it felt badly about the mindless violence, NUM used the service to launch a fight back against its detractors. Just as reports from the memorial service in Marikana described ANC Youth League renegade Julius Malema launching a attack on anything even remotely resembling government, so too, at the City Hall, NUM took the opportunity to push back.

While in Marikana, Malema took it to the government. At the Johannesburg City Hall, NUM decried the leverage political figures like Malema won in Marikana in the last week. In a thinly disguised attack on Malema, NUM President Senzeni Zokwana said, “Those banned from the ANC should not use the miners as a political platform!”

Ultimately, Zokwana attributed the entire incident at Marikana to succession politics within the ANC. He likened the rise of anti-Zuma sentiment following Marikana to vultures circling overhead, ready to pounce in readiness for Mangaung. “Just look at where the vultures are now circling to understand real reason behind the shooting.

“The question most people are asking is if this could this be about wages. If yes, why arms, why sangomas,” Zokwana said.

According to Zokwana, the condition of the bodies of those killed at Marikana points to a greater conspiracy. “Bodies were mutilated, body parts missing,” he said, “This points to something greater than a wage dispute.

“Was it really about a strike?” Zokwana asked, “Or is it an opportunity for those who have an agenda in Mangaung?”

He firmly lambasted of what he said was parliament’s failure to adequately acknowledge the sacrifices of the country’s mine workers, of which the Marikana incident was just the latest example. “Mineworkers have been exploited enough,” he said as he implored that the deaths in Marikana not be used as a tool to sow division within the ANC.

And though Shimange stressed that the police had also sustained fatalities in violence at the Lonmin mine last week, she offered the police union’s condolences to the victims’ families. “To the bereaved families, we are saying we share this pain with you,” she said.

Cosatu Secretary General Zwelinzima Vavi was present and visibly prepared to speak, though he was not offered time on the podium. A statement released later by Cosatu Spokesman Patrick Craven steered clear of the sticky politics, bemoaning instead the excessive use of force by the police. “One question which we have to confront immediately however, is what Cosatu has raised for many years now the brutality and ‘skiet en donner’ attitude on the part of the commanders of the police.

“While the Commission of Enquiry must determine precisely what happened—and we cannot attach blame until we have the full picture—there can be no doubt that the police response was excessive,” his statement said.

Gauteng Premier Nomvula Paula Mokonyane was more conciliatory towards the police. “The Marikana police shootings happened after a week of violence by striking workers that resulted in the death of security guards and police officers,” she said.

For Mokonyane, however, a comment on the prevailing politics was too titillating to ignore. She, too, attacked Malema for offering help to the victims’ families as a way to advance his own political ambitions. “Many hovered around Lonmin with briefs that had nothing to do with helping families,” she said, going on to call such people “messiahs for miners”.

“To those opportunists, remember, in a corner of South Africa, there are widows, orphans and women in pain,” she said.

“This hour of mourning is not the time for finger pointing and name calling,” she said, even though she herself had lent deep political undertones to what was supposed to be a memorial service.

In the end, in Johannesburg as in Marikana, attempts at a memorial service for the victims of last week’s violence denigrated into a political boxing match. The miners are hardly dead a week and already their names are tainted with the dirty politics of the ANC succession battle. DM