Marikana: Zuma reclaims his soul, and his presidency 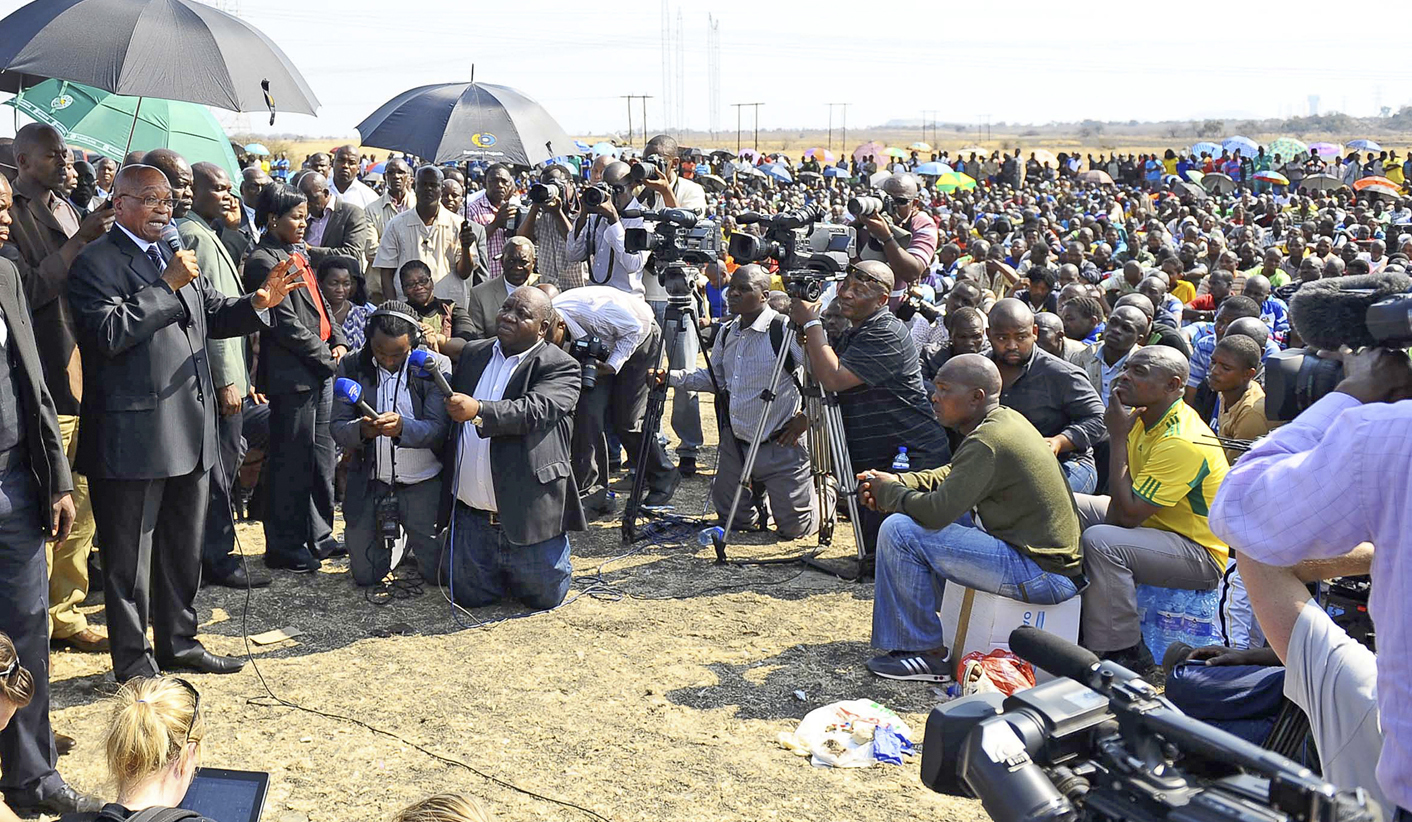 It has been difficult to find a silver lining in the 44 violent deaths at Marikana, but there appears to be a glimmer. On Wednesday, President Jacob Zuma showed qualities South Africans have not seen in a long while: compassion, attentiveness, assertiveness and, most of all, he was presidential. The massacre has also lifted the lid on the injustices in the mining industry, which is now getting attention at the highest level. By RANJENI MUNUSAMY.

The ANC’s centenary lectures taking place every month this year in different provinces have not been particularly rousing affairs. They have been protracted and laborious history lessons about ANC presidents and the periods of the struggle during which they presided. Were it not for violent commotions marring some of the centenary events, the speeches would go by unreported as they contained nothing contemporary or noteworthy. They mostly presented an organisation going through the motions on its way to the all-important Mangaung.

August’s lecture in honour of James Moroka, the ANC’s seventh president, took place on Wednesday in the Northwest, now the focus of the country’s attention in the wake of last week’s massacre of 34 mineworkers by police at the Lonmin platinum mine at Marikana. A day after the massacre, Zuma made his way to the area from Mozambique and met with the police leadership for a briefing on the incident, followed by a visit with some of the injured in hospital.

He also held a media briefing where he announced the appointment of a judicial commission of inquiry into the deaths of the 44 people—10 people, including two policemen, were murdered before the massacre during the wildcat strike by the Lonmin rock drillers. Zuma did not meet the striking mineworkers or the community at Marikana, which had been left shell-shocked by the violence.

Apart from an inter-ministerial committee appointed by Zuma to assist the community, ANC and alliance leaders have been visibly absent from Marikana since the violence began. The Cosatu-affiliated and ANC-aligned National Union of Mineworkers has been rejected by the strikers, who prefer the smaller Association for Mineworkers and Construction Union to represent them.

Anti-government sentiment has been rife due to the police being viewed as aggressors, and the miners have welcomed the intervention of opposition and religious leaders. The people whose assistance they most embraced have been expelled ANC Youth League leaders Julius Malema, Sindiso Magaqa and Floyd Shivambu.

The former ANCYL leaders were apparently asked for help by the mineworkers themselves. They have been in and out of Marikana daily since the massacre, arranging legal representation for the 259 workers who were arrested on the day of the massacre, assisting the women identify missing relatives and helping the community lay charges against the police for the 34 murders. Malema also wants to launch a court petition to allow the jailed miners to attend the funerals of their slain colleagues.

Malema has maximised on the ill will towards government to bash Zuma and his ministers, blaming the president for the massacre and declaring: “I don’t trust President Zuma and his inquiry”.

For days, as shock and anger escalated around the massacre, the country yearned for leadership. The period of national mourning announced by Zuma was going by rapidly without the nation knowing how to come to terms with the horror of the killings, which has evoked too many memories of the brute force of the Apartheid-era security forces. In the meantime, conspiracy theories and alarming versions of last Thursday’s events are in the public domain with no means of verification until the commission of inquiry completes its work.

Then on Wednesday, Zuma, on his way to the ANC centenary event in Mahikeng, went back to Marikana. It could not have been easy for him to venture into such hostile territory, not knowing what to expect. What Zuma found was the battle-weary mineworkers wanting someone to listen to them and to acknowledge their suffering. And that he did.

One of the workers recounted the sequence of last Thursday’s events to Zuma while another emptied a packet of spent bullet casings on the ground, which the president crouched down to examine.

The speaker demanded that a policeman in the crowd leave before he continued, explaining the workers’ demand for their wage to be increased to R12,500. The workers applauded when their representative mentioned Malema: “He came. He listened. He cares,” the man said.

Zuma told the workers he came back to Marikana to hear their version of events. “I hear that you are saying you won’t leave here until you get the money you want. I wasn’t aware of an agreement between government and employer that you must be killed as you say but that must be investigated. I will also send a message to the employer that you demand R12,500.

“If there is anything that needs me, I will come in person again,” Zuma said.

“This is painful to all of us. It is not acceptable for people to die where talks can be held. But I do feel your pain and have come personally to express that. I am certain that the commission of inquiry will get to the bottom of what happened here.”

At the ANC event later in the Northwest capital, Zuma abandoned the customary formula of centenary lectures and focused a large proportion of his speech on the Marikana tragedy and the mining industry. Instead of the staccato manner he normally reads speeches, there was compassion in Zuma’s voice. Before he began the speech he led a mourning song, Senzeni na, which the crowd joined in.

“The tragic loss of life has caused untold pain to the families and the nation at large,” he said. “We were shocked and deeply saddened by all the incidents and all the deaths of mineworkers, security guards and two police officials over a period of a week. The life of every South African is important.”

He repeated the government’s refrain that this was not a time to apportion blame or for finger-pointing. “It is a week of unity as we come together as a nation to support the grieving families from all sides.

“Earlier today I again visited Marikana and obtained a report from the striking workers. I have now listened to all sides. But I will not prejudge the incidents. The judicial commission of inquiry that we are in the process of establishing will uncover the truth about what happened in Marikana. It must tell us how the industrial dispute degenerated into such a tragedy,” Zuma said.

Through this great tragedy, a spotlight has been cast on the mining industry and the abysmal conditions in which its workers live and work.

“It is well understood that mine workers operate under difficult and risky conditions underground,” the president said. “Many still live in unacceptable conditions in hostels of compounds where they share sleeping quarters and ablution facilities, as it used to happen during the period of colonial oppression and Apartheid. They remain amongst the poorest in our communities.

“The Marikana tragedy has also reminded us of our responsibility of the ANC government to monitor the contribution of the mining sector to building democracy with a social content through agreed prescripts such as the Mining Charter. Given that this industry is the backbone of our economy and has a long, bright future, we have to ensure that its growth also benefits workers and communities it operates in,” Zuma said.

He said government had conducted audits on compliance with the Mining Charter for all platinum mines in the Northwest region. In terms of the 2012 score card, he said, the improvement of hostels to attain the one person/one room upgrade and into family units is only 50%. One company had a hostel block accommodating 166 employees, who had to share four toilets and four showers among them, Zuma said.

“We urge the industry to take this matter seriously. Mine owners are aware that sanctions for non-compliance with the charter include the cancellation of mining rights or licences,” he said.

While Zuma has up to now balked at discussions in the ANC around mining in order to discourage the ANC Youth League’s campaign on nationalisation, Marikana’s events seem to have made him think otherwise. He said South Africa’s mining assets are currently valued at $2.5-trillion, excluding energy commodities such as coal and uranium.

“Estimates suggest that our mineral resources are expected to be exploitable for over a century to come. It is for this reason that the ANC will discuss mining at length at the national conference in December, to see how we can derive greater benefit from the sector.”

Introducing the president before his speech, ANC Chairwoman Baleka Mbete said the last centenary lecture in December would be on Zuma, and in it people would then find out who he really was. But on Wednesday South Africa saw traces of the president it really needs, a leader who lent an ear to the suffering and struck all the right notes to move the country beyond the horror of the Marikana tragedy.

On Wednesday he became the Jacob Zuma he had once promised to be: The People’s President. DM