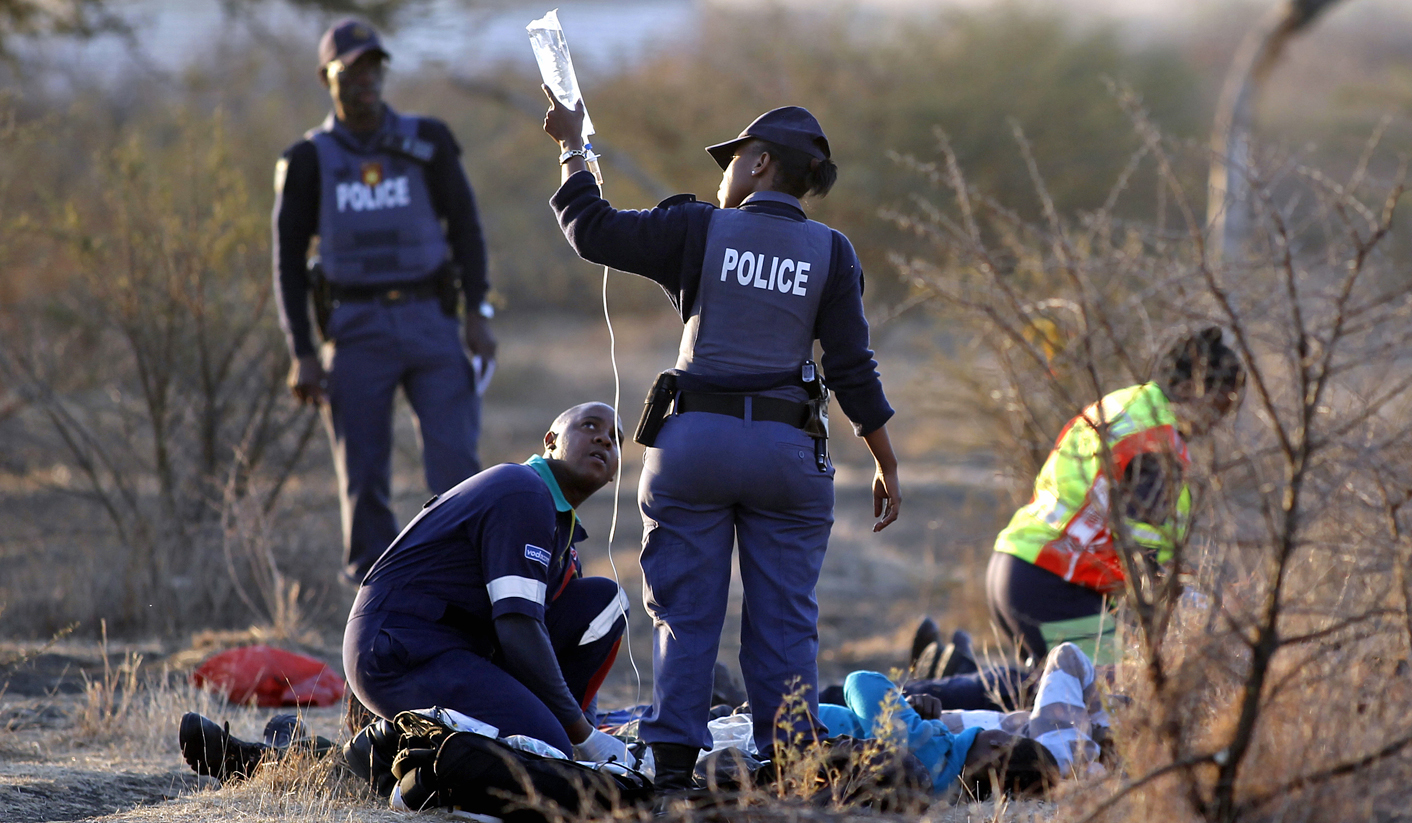 We might never know what was in the minds of mineworkers who advanced on police before the first blast of gunfire was heard at Marikana or how it felt for officers to squeeze the triggers of their R5s, raining down live rounds on other human beings. What we do know now is that they should never have had to encounter each other on that dusty field where mindless horror reigned. By RANJENI MUNUSAMY.

As a period of national mourning begins in South Africa in the wake of last week’s dreadful events at Marikana, we have yet to hear someone, anyone, say “We are sorry for what happened. We should have done more to prevent this.”

All are people who should have shown leadership as the crisis escalated in the days leading to last Thursday’s massacre. Instead, the deaths of 10 people prior to the bloodbath and mounting tensions on the hill where the striking workers were gathered did not ring alarm bells and prompt them to intervene to defuse the situation.

In the face of another national disaster, a series of investigations and task teams have been set up to quell the public outrage. But questions need to be asked of those who failed both the dead and those who killed them. As the eyes of the world turned to our country, we were unable to provide answers as to why this happened. The situation at Marikana did not arise out of the blue. It did not need to reach the boiling point.

Zuma should have been briefed by domestic intelligence services and the police that the wildcat strike at mine had become a ticking time bomb that needed extraordinary measures to defuse. After two security guards and two policemen were hacked to death last Sunday and Monday it should have become clear to security services that this was no ordinary wage strike.

Government should have deployed skilled mediators to the scene and Zuma should have jacked up his mining minister to act on the situation, particularly to arbitrate between the rival unions. Shabangu also needed to get answers from Lonmin as to why they backed out of negotiating with the workers.

Lonmin’s behaviour of treating the workers with disdain clearly inflamed temperatures of the workers. The fact that they are still threatening to fire the workers in the face of such an enormous tragedy means the company has learned nothing from the deaths of its workers and is still thwarting a negotiated settlement.

The workers and the union reps clearly have no powers to bring Lonmin to the negotiating table. Shabangu does.

Over the weekend, the mining minister vehemently dismissed suggestions that government had moved too slowly to deal with the situation at Lonmin, claiming government interventions had happened behind closed doors.

It obviously escapes the minister that the fact that 44 people have been brutally killed means that the undercover interventions were a spectacular failure, not the usual failure our ministers are so happy and self-satisfied about.

The leaders of NUM and Amcu have been interviewed repeatedly by the media since the massacre. Up to now, they have been unable to provide straight answers as to why the situation and Marikana exploded and whether their rivalry was the underlying cause. Instead, they insult each other and point to the other’s culpability. They appear oblivious to the blood stains on their own hands.

Cosatu’s response to the massacre has been somewhat restrained, considering how proactive the federation is on national issues. After its central executive committee (CEC) was briefed by NUM, Cosatu said it “reiterates its call for workers to observe maximum discipline and unity in the face of a ruthless attempt to divide and weaken them”.

Though perhaps not intentionally, it seemed Cosatu was more concerned that its biggest affiliate was being challenged by a much smaller union than the fact that NUM had lost the confidence of workers at Marikana.

“The CEC pledged its full support the National Union of Mineworkers’ efforts to resolve this situation,” Cosatu said. This is a wholly inadequate response, particularly because Cosatu is well aware that NUM couldn’t even go near the workers, let alone resolve the situation.

Vavi is usually pragmatic and acknowledges faults where he sees it. He is best placed to ask the leadership of NUM why it is floundering in the platinum sector and why mineworkers were turning away from them.

It is totally out of character for him to stand back when workers, particularly from his sector, are in distress. He would be all too aware that the rock drillers at Lonmin are being paid a pittance and that was the reason they are so angry and desperate.

Could it be that Vavi is unusually restrained on this issue because he and NUM have clashed on succession issues in the ANC and because NUM has threatened to put up someone else to challenge his position at next month’s Cosatu congress? Vavi is trying his utmost to prevent instability within Cosatu and trouble at its congress. It is probably why he has washed his hands of the Lonmin workers.

Mantashe refused to confirm to the media over the weekend whether the ANC’s national working committee would discuss the Marikana massacre at its meeting on Monday afternoon. As the administrative head of the ruling party and former secretary general of NUM, he is also unusually quiet on the issue. As someone who claims to have intimate knowledge of the mining sector and miners in particular, Mantashe seems unwilling to get his hands dirty on this matter.

With so much experience under his belt, Mantashe should have been offering counsel to his successors at NUM on how to handle the situation. He should also have had an ear to the ground through local ANC structures which should have tapped into the serious discontent of the workers.

But the ANC’s official statement on the massacre did not give any indication that it had inside knowledge of the issue or could assist to resolve the standoff in any way.

“It is the view of the ANC that these deaths could have been avoided had the trade union operating at Lonmins (sic) and Lonmin mine management found a resolution to the dispute. Even at this late stage where blood has been spilled and lives lost, we call upon the union involved and the employer at Lonmin mines to find a last (sic) resolution at this stage,” the ANC said.

Police planning at Marikana was clearly wrong. They had almost a week to assess the size of the gathering and should have had contingency measures in place. There can be no justification for a state killing its citizens by firing on them with live ammunition, especially when they had time and resources to monitor and plan.

Yet Phiyega said Friday police were compelled to use “maximum force” to protect themselves. She did not say why it came to the point where her 423 officers on the scene suddenly felt under siege and had to protect themselves when they knew days before that the situation was volatile and threatening to get out of hand. But as novice in policing and security issues, how would Phiyega be expected to know this and address the nation confidently on how the police is meant to behave in such a situation?

Phiyega also said it was not the time for “finger pointing”. Thing is, this is a country with a Constitution that protects citizens’ right to life. It is not a military state where people can be killed by security forces and no questions are asked or fingers pointed. So when people under her command feel their lives are in danger or they shoot people with the intention to kill them, South Africa will demand to know why and want to know who is to blame.

As the shocking footage, stories and pictures of the Marikana massacre went around the world, many of the people who could have intervened to avoid the disaster scrambled to take control and show they were dealing with the matter seriously.

It was too little, too late.

Nothing any of these people can say or do now can undo those fatal three minutes on Thursday, 16 August, when police fired live ammunition into the group of mineworkers. Those three minutes left 34 people dead, 78 wounded, families in grief and the rest of South Africa stunned.

This week we will mourn for the 44 people who lost their lives in the unfolding Marikana disaster. But we also need to cry for South Africa whose patent crisis of leadership has now become deadly. DM

Photo: A paramedic (front L) receives help from a policewomen as he tends to the injured after protesting miners were shot outside a South African mine in Rustenburg, 100 km (62 miles) northwest of Johannesburg, August 16, 2012. South African police opened fire on Thursday against thousands of striking miners armed with machetes and sticks at Lonmin’s Marikana platinum mine, leaving several bloodied corpses lying on the ground. REUTERS/Siphiwe Sibeko