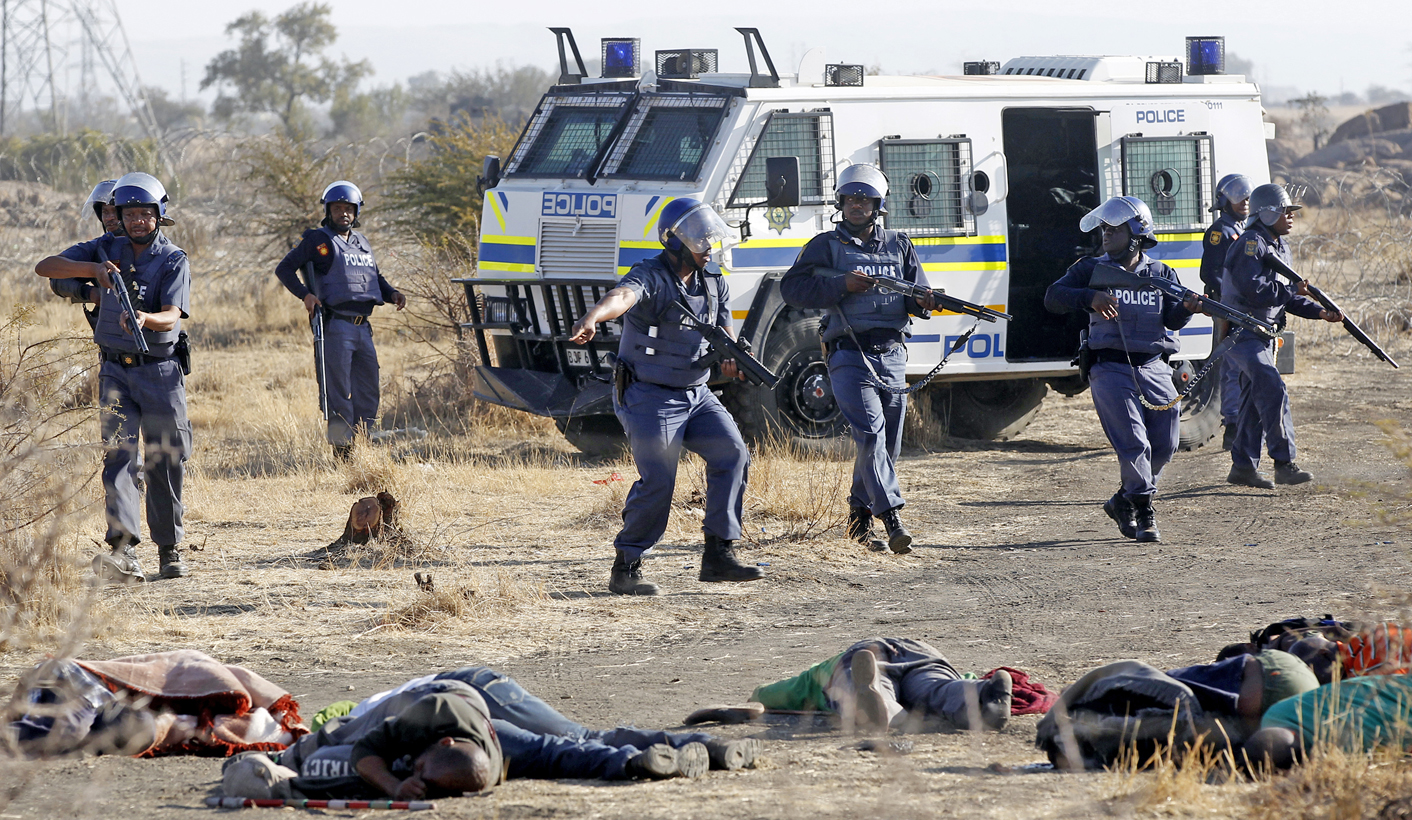 On Thursday morning, NUM’s leaders warned that the situation at the Marikana mine could result in deaths. Several hours later, a dozen or so striking miners were reported dead – shot by the police. The union said that it did what it could to quell the situation. Where was everybody else? By SIPHO HLONGWANE.

Shortly after 16:00 on Thursday afternoon, after another attempt at negotiations had failed between representatives of the platinum mining company Lonmin, the National Union of Mineworkers (NUM), the Association of Mineworkers and Construction Union (AMCU) and a large group of miners gathered at a nearby hilltop in an illegal strike, heavily armed members of the police’s Tactical Response Team moved in on the group of miners to disperse them. The police were suddenly confronted by a smaller group who refused to budge.

What happened next is unclear, but there was a sudden rattle of gunfire and the hiss of tear gas from the police line, and a few minutes later, several bodies of miners were seen lying on the ground. Whether they were dead or just knocked unconscious could not be confirmed, as the police quickly cordoned the area off. The number of injured or dead was also still unclear on Thursday night – the alleged number ranged from seven to 18. The whole incident was caught in jarring detail by television cameras and photographers on site.

The shootings were the end result of a situation that had started last week on Friday, and had happened despite warnings from various union leaders that this could end in tragedy.

On Thursday morning, at the NUM’s national headquarters in Johannesburg, both the president, Senzeni Zokwana, and the general secretary, Frans Baleni, made it clear that they were being asked to take charge of a situation that was not of their making, nor within their powers to solve. The matter should have been resolved a lot sooner by a combination of Lonmin’s managers, the North-West provincial commissioner of police (and his deployed lieutenants) and the province’s political leadership. Instead, what was localised industrial action has escalated into something much bigger.

On Wednesday, Lonmin, NUM and AMCU were supposed to meet with the police to discuss how the stand-off may be resolved. Zokwana and AMCU’s president, Joseph Mathunjwa, were all expected to speak to the strikers – only AMCU’s people were allowed to approach. Lonmin reportedly did not put anyone forward to speak. On Thursday, AMCU claimed on the eNews Channel that it was told by Lonmin that since the police had declared the hilltop an operational area, it would no longer conduct any type of negotiations. AMCU relayed the news to the crowd, and then the police moved in to clear the area.

On Thursday morning, NUM placed the blame for the whole incident on Lonmin.

Baleni said that AMCU was a creation of BHP Billiton and the Chamber of Mines, who wanted to create a rival to weaken NUM. The leaders of AMCU then went around the mine, saying to drillers that they could get R12,500 a month (representing a pay hike of more than 300%) – this was despite the fact that this new union has no bargaining rights since it has less than 30% membership at this particular mine. According to NUM, the company then entertained discussion with drillers despite the existence of a two-year wage negotiation deal that was signed last year. Lonmin then balked at the figure, leading to the illegal strike and the violence over the weekend, when the marchers apparently attacked NUM representatives and were shot at by mine security and police officers.

Zokwana said that anyone who was even associated with a NUM representative at the mine faced the threat of violence. NUM claimed that a hit list was circulating on the hill with the names of known NUM shop stewards. He refused to accept blame for the tensions, saying that it was now a confirmed fact that it was AMCU who went around with the R12,500 figure and who also organised the illegal strike.

“AMCU is saying up on the mountain, ‘We will give you this money’ but they are not talking to management. What will they say to those people when they can’t get the money?” Zokwana said.

Baleni and Zokwana have both made appearances at Marikana, to no avail. They said that they had handed over any pertinent information to the police and called on security to allow those who want to work to be given safe passage to do so.

The union is blaming the police for asking its leaders to do their job for them. Baleni and Zokwana said that they had reported the names of individuals perpetrating violence, but by Wednesday there had been no action taken by the police despite the weekend’s violence.

NUM deputy president Piet Matosa said, “The people gathered on the mountain are suspects, but they are not searched, arrested or dispersed. What can a trade unionist do in such a situation?”

Several hours before the violent clash began, Zokwana said, “We are not solving the problem if those people are allowed to disperse without being searched. The way that the men on the mountain are psyched, it is only the police who will be able to deal with them.”

The union has a point: despite 10 people dying, the police seemed extremely reluctant to do anything about it. No arrests were made, and crucially, nobody was searched even though it was known that the strikers were armed, at the very least, with the weapons that they had taken off the murdered security guards and police officers. The miners were allowed to congregate in huge numbers in an operational area and to arm themselves with all manner of traditional weapons and machetes. The men were clearly hostile to NUM and, to make things worse, AMCU was clearly not in any sort of control.

The reluctance of the police could come from the fact that they did not seem to have public backing from any political figures. Aside from a cameo appearance by national police commissioner Mangwashi Phiyega, no other significant politician had anything to say. The silence from North West premier Thandi Modise, the local MECs and other political principals is disconcerting under the circumstances.

Unfortunately, however, it appears that the finger-pointing is only beginning. DM

Photo: A policeman gestures in front of some of the dead miners after they were shot outside a South African mine in Rustenburg, 100 km (62 miles) northwest of Johannesburg, August 16, 2012. South African police opened fire on Thursday against thousands of striking miners armed with machetes and sticks at Lonmin’s Marikana platinum mine, leaving several bloodied corpses lying on the ground. A Reuters cameraman said he saw at least seven bodies after the shooting, which occurred when police laying out barricades of barbed wire were outflanked by some of an estimated 3,000 miners massed on a rocky outcrop near the mine, 100 km (60 miles) northwest of Johannesburg. (REUTERS/Siphiwe Sibeko)