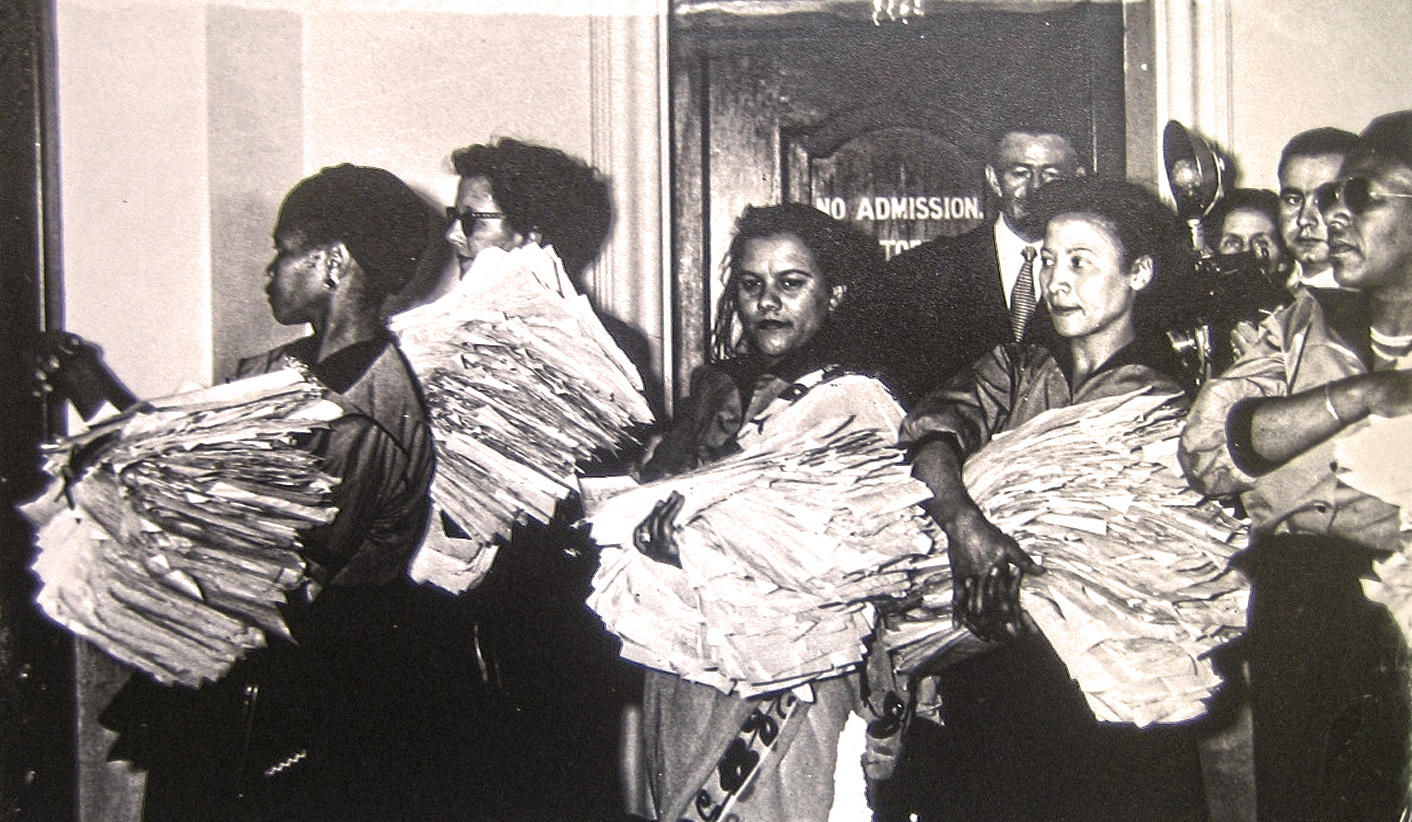 South Africa’s gender parity laws have seen women rise to positions of power in the state, the private sector and civil society. On National Women’s Day, there was much talk of increasing women’s rights, strengthening measures to deal with violence against women and increasing support for their economic empowerment. But the lesson of the historic 1956 women’s march was that they had the courage to speak out—even through silence. By RANJENI MUNUSAMY.

One of the most memorable days in the lifespan of South Africa’s democratic Parliament was in September 1999, when Patricia de Lille stunned the country with allegations of corruption in a multibillion-rand arms acquisition.

An MP for the Pan Africanist Congress (PAC) at the time, de Lille caused a ruckus in Parliament when she belted out names of ANC heavyweights she alleged were involved in corrupting the arms deal. For years she made the arms deal her personal crusade and kept at her investigation after she left the PAC and formed the Independent Democrats, the first political party to be led by a woman in South Africa.

The allegations may not be proven 13 years after de Lille raised the alarm on the arms deal, but nobody doubts whose was the first brave voice to speak out and draw attention to the fact that something untoward had happened.

The story caused high drama at the time, not only because the claims were so sensational and put the first chink in former President Thabo Mbeki’s armour, but because it was quite something for the ANC’s “big men” to be challenged by the lone voice of a woman.

But de Lille had built up quite a reputation in Parliament. In her first year as an MP, she had the record for asking the most questions. She became the first MP to be suspended, took Parliament to court and won the case on the basis of her right to freedom of speech. Parliament appealed to the Supreme Court of Appeal and she won again. In 2000, she took five ministers to court over the conditions of juvenile prisoners and won that case too.

She was a constant thorn in Mbeki’s side during his presidency, calling him out on his Aids denialism and badgering him on delays in providing antiretroviral treatment to HIV positive people.

When people in Mbeki’s own party, including struggle stalwarts and health professionals who knew better, were afraid to confront the president on government’s inadequate response to the disease, de Lille was not at all daunted by the prospect of challenging arguably the most powerful man on the continent.

These days, de Lille’s voice as a member of the Democratic Alliance and mayor of Cape Town is somewhat muted on the national stage. As a result, the dynamism of the opposition is rather diminished and public interest in the affairs of Parliament is significantly reduced.

While there are many female voices in the Democratic Alliance, including its leader Helen Zille, they have yet to attain the status of formidable challengers to the powerful. They are yet to progress beyond the status of minor irritants to voices that reverberate through the annals of power.

National Women’s Day in South Africa is commemorated in tribute to the 20,000 women from all over South Africa who marched to the seat of government in Pretoria on 9 August 1956. They had come to protest pass laws which, among other things, prevented African women from living with their husbands in the towns where they worked.

Dozens of protests against pass laws for African women took place before the Federation of South African Women and the African National Congress Women’s League organised the massive protest march in Pretoria. Perhaps the most poignant aspect of that march was that they stood in silence for 30 minutes while petitions with 100,000 signatures were delivered to the Prime Minister’s office.

Even the men in the anti-Apartheid movement were caught by surprise by the size of the march and the women’s militancy. Women were taken more seriously and took on greater roles in the liberation struggle, with many joining Umkhonto we Sizwe, the ANC’s armed wing.

Speaking in Pretoria yesterday, President Jacob Zuma said the ANC government was determined to meet the 50-50 target on women’s representation in leadership roles.

“In the national executive, we have 14 Cabinet ministers and 15 deputy ministers.  In addition, five out of nine premiers are women, which mean the majority of provinces are run by women.

It is difficult to quantify though how more of women in positions of political power benefits the female population of South Africa. Women elected to national, provincial and local government are there to represent the broad mandate of their political parties, not to champion women’s issues.

In 2009, the Zuma administration established the Ministry for Women, Children and People with Disabilities to focus on the most vulnerable in society. However the ministry has been lethargic in its work, even after its first minister was fired and replaced by Lulu Xingwana.

This is not to say that important strides are not being made in the area of women’s empowerment and to strengthen the legal framework to combat the abuse of women.

Despite the increased number of women in commanding positions, particularly in the state, it is still difficult to find brave voices in the league of the leaders of the 1956 women’s march or de Lille’s in Parliament, voices which either shrilly or silently dared to speak truth to power.

The ANC Women’s League (ANCWL) is the most prominent political organisation for women in the country but has over the years developed a reputation as a cheerleading and choral society, without any dynamism in its leadership. It is wholly absent from national debates, and apart from applauding the actions of the incumbents in government and the ANC it recoils from asking difficult questions of the leadership.

Throughout the Limpopo textbook fiasco, the most visible government failure of young children, we have not heard the voices of their mothers. In fact, while civil society generally has been outraged, the people of Limpopo seem to be accepting of the appalling failure of their children.

The ANCWL, headed by Minister of Basic Education Angie Motshekga, the person ultimately responsible for handling the crisis, has of course shirked away from the issue. The league has not dared to call in either Motshekga or Xingwana to explain the failures of their departments or for bringing woman representatives in the national executive into disrepute due to their incompetence.

Nor has it asked President Zuma for an explanation of numerous incidents of corruption and ineptitude in government. Yet, the women’s league is firmly behind his candidacy for a second term, without once examining how his presidency benefits the lot of women against what any other candidate may be able to do for the course of women empowerment.

The ANCWL projects itself as the custodian of the achievements of women in the liberation struggle and claims the courageous voices of women of yesteryear as its own. But liberation the organisation has not made any effort to encourage brave voices in its ranks to challenge the powerful.

The women in politics in 2012 are a far cry from the 20,000 who marched to Pretoria in 1956. With so many channels of communication accessible to the current generation of women leaders, they still cannot compete with silent power of the women who dared to stand up to the evil of Apartheid. DM