London 2012 Tennis: Gold, not tears, this time for Murray 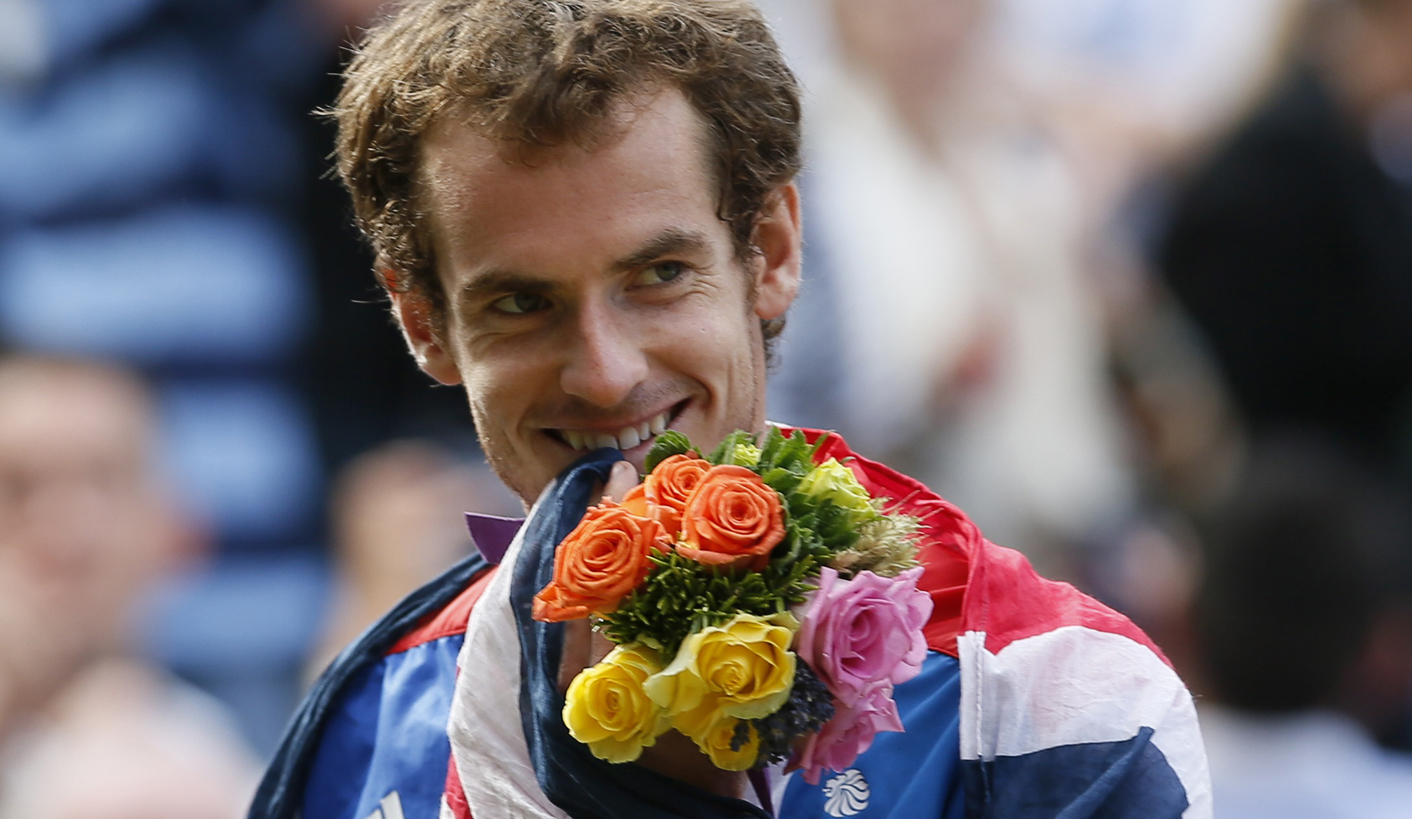 For Britain's Andy Murray every cloud has a golden lining. Four weeks after the Scot cried his eyes out after losing to Switzerland's majestic Roger Federer in his first Wimbledon final, he returned to a sunlit Centre Court to exact sweet revenge and walk off with an Olympic gold medal. By Martyn Herman.

Murray is yet to win a grand slam title, the real hard currency for tennis players, but on Sunday he produced the match of his life, riding the wave of Olympic euphoria sweeping across the land to thrash the world number one 6-2 6-1 6-4.

“It’s worth it. I’ve had a lot of tough losses in my career, but this is the best way to come back from the Wimbledon final. I’ll never forget it,” Murray told reporters before returning to court partner teenager Laura Robson in the mixed doubles final.

Unlike the old saying about London’s buses – you wait for ages, then two come along one after the other – another gold was not forthcoming as they were beaten in a lively tussle with Belarussians Max Mirnyi and Victoria Azarenka

A statue of Fred Perry, the last British man to win the actual Wimbledon men’s singles title back in sepia-tinted 1936, stands in the grounds – a reminder of the nation’s tennis under-achievement throughout the decades, but for two golden hours on Sunday Murray wiped away the years of hurt.

Seven-times Wimbledon champion Federer, in most people’s book the greatest player of all time, walked on to his favourite court one victory away from claiming a career “golden slam” by adding Olympic singles gold to his record 17 grand slam titles.

He trudged off dejected after suffering his worst ever defeat at Wimbledon since his sublime talent first graced the lawns of west London in 1999.

“For me, it’s been a great month. I won Wimbledon, became world number one again, and I got silver. Don’t feel too bad for me,” was 30-year-old Federer’s classy response to what in all intents and purposes was a shellacking.

Murray, whose every winner was accompanied by deafening roars, was utterly dominant, dishing out the kind of punishment that Federer has been inflicting on opponents throughout a career that has earned him $77 million in prize money but will probably not now include a cherished Olympic singles medal.

From 2-2 in the first set, Murray went on a nine-game rampage to rip the gold medal away from Federer’s grasp.

Peppering the corners with groundstrokes of effortless power he kept the Swiss off the scoreboard for nearly an hour mid-match and by the time Federer did notch a game, at 0-5 in the second set the match was as good as over.

Murray was in no mood to let Federer off the hook as he had done in the Wimbledon final, when he fell away after winning the opening set. He was relentless.

He finished it off with an ace before climbing into the stands to embrace his family and coaching team as the delirious crowd chanted “Andy, Andy”.

To think that once upon a time, when he was a sulky, surly teenager, British fans could not warm to him.

In Beijing four years ago he produced a lame performance, crashing out in the first round of the singles.

On home territory, however, Murray has had his eyes focused on winning a gold medal the moment the tears stopped flowing after his defeat by Federer exactly four weeks ago.

Murray’s career will still ultimately be defined in terms of grand slam titles. But he left no one in any doubt as to what Sunday’s triumph meant.

“It’s definitely different. I’ve won an Olympic gold medal, I haven’t won a grand slam,” said Murray, who has lost all four grand slam finals he has contested, three of them against Federer. “I know how this feels and it feels great.

“I’ve lost some tough matches in some tough finals and that’s hurt me a lot. I think tennis in the Olympics is getting better each time it’s played because all the top players are playing now. For me it’s the biggest win of my life.”

After his tears four weeks ago, Murray’s face was a picture of contentment as he stood on the podium with God Save the Queen filling the air for the 16th time at the Games.

A self-confessed sports fanatic, Murray said the last few staggering days for British sport had helped propel him to the greatest heights of his career so far.

“To win against Roger in straight sets on Centre Court, I’m going to say it probably hasn’t happened in about 12 years so I must have played a very good match,” he said.

“This week’s been absolutely incredible so far, I’ve had a lot of fun. The support’s been amazing.”

Juan Martin del Potro of Argentina joined Murray and Federer on the podium, placed in the middle of Centre Court, after beating Serbia’s Novak Djokovic to the bronze medal.

Unlike Murray, Serena Williams did walk off with two gold medals swinging round her neck after partnering sister Venus to the women’s double title, beating Nadia Petrova and Maria Kirilenko in straights sets.

It completed a superb tournament for the U.S. team who bagged three golds – twins Mike and Bob Bryan claiming the other one in the men’s doubles on Saturday.

“It definitely is a special moment. I don’t think there’s ever going to be another Olympic Games in such a venue,” world number one Azarenka told reporters. DM