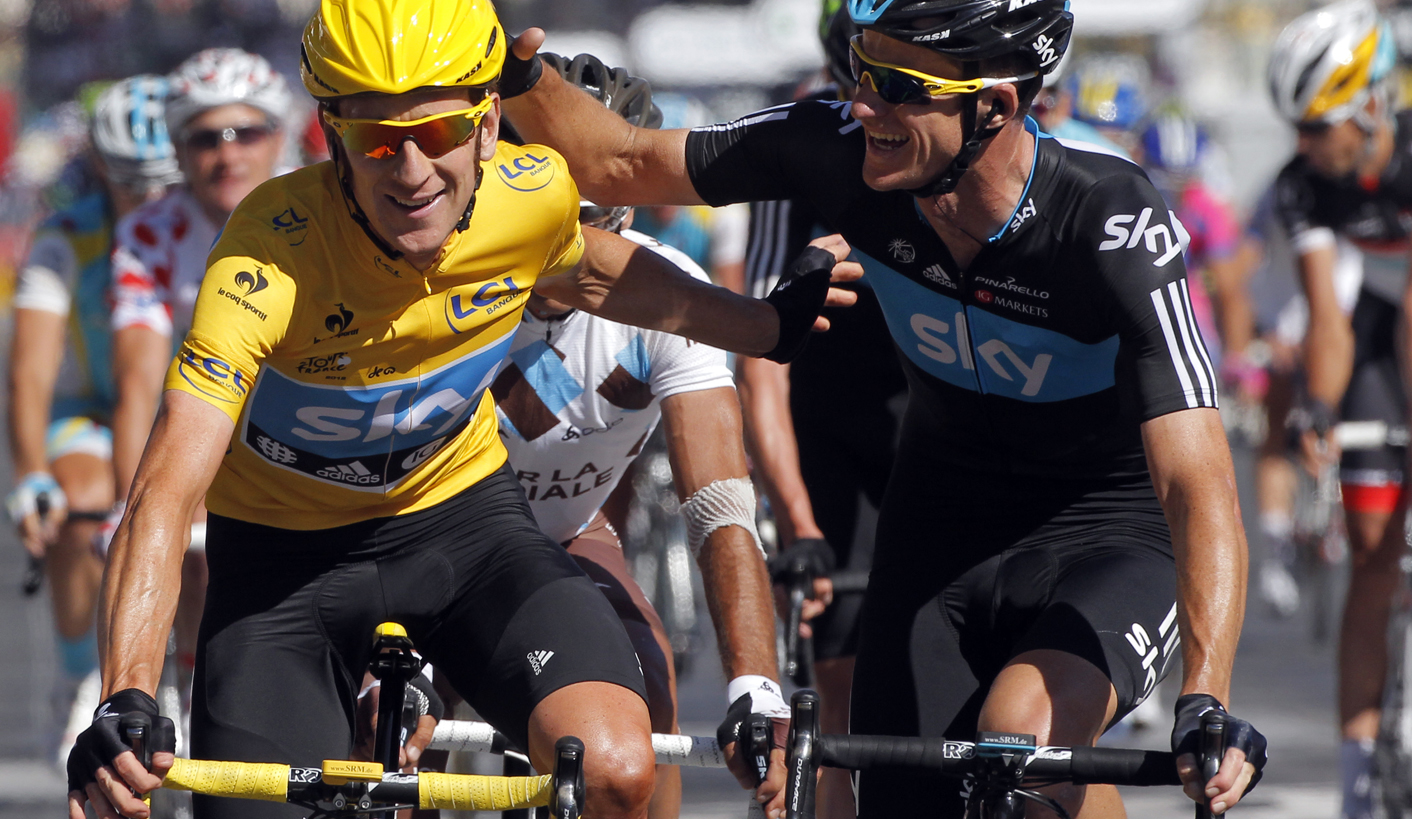 Bradley Wiggins was greeted by thousands of Union Jack-waving fans on the Champs Elysees when he claimed the 99th edition of the Tour de France to become the first British winner of the famous race on Sunday. By Julien Pretot.

Wiggins finished safe in the bunch on the 20th and last stage, a 120-km ride from Rambouillet, as he helped his Sky team mate and fellow Briton Mark Cavendish to victory.

“What a finish, that was something, Mark won the stage after we led him out in the finale. Wonderful, wonderful,” Wiggins told reporters.

“Mark remains unbeaten on the Champs Elysees, that was the plan this morning.

Asked about making history, Wiggins added: “I’ve got to start getting used to that now which is strange. It’s mission complete.”

Next year, pure climbers Alberto Contador and Andy Schleck are expected to return to the race after a doping suspension and injury respectively.

A potentially hillier route next July could also threaten Wiggins’ domination, as could Team Sky rival Chris Froome who finished second this year.

Cavendish, who has now surpassed Andre Darrigade and Lance Armstrong with his 23 Tour stage wins, has won all four sprints he has contested on the landmark avenue.

He is also the first reigning world champion to win on the way up to the Arc de Triomphe.

Belgian Eddy Merckx holds the record with 34 stage wins on the Tour.

“For me this race is everything, it’s what my whole year is built towards every year,” he later told reporters, aware that the London Olympic road race takes place next Saturday.

“Have a safe journey and don’t get too drunk,” Wiggins told the thousands of fans as he topped the podium.

Australian Cadel Evans, who started the three-week race as the defending champion, finished seventh overall and was beaten by his BMC team mate Tejay van Garderen, with the American taking fifth place and the white jersey for the best Under-25 rider.

RadioShack-Nissan won the team classification and Dane Chris Anker Sorensen was voted the most aggressive rider.

Wiggins, the first rider to win an Olympic track gold medal and the Tour, snatched the yellow jersey in the seventh stage at the end of the brutal climb to La Planche des Belles Filles.

The Athens and Beijing Olympic pursuit champion consolidated his overall lead with an awe-inspiring performance in the individual time trial on stage nine before Team Sky rode defensively in the mountains.

Only Froome appeared to be able to unsettle Wiggins, but the Kenyan-born rider was ordered by Team Sky to stay put after accelerating in the ascent to La Toussuire in the Alps.

Froome was again close to giving in to temptation in the Pyrenees, when he repeatedly gained a few metres on Wiggins in the climb to Peyragudes, urging his team leader to follow the pace with conspicuous hand gestures.

Wiggins refused to be drawn into controversy, but sports director Sean Yates later acknowledged he had asked Froome not to move away from his team mate.

Wiggins, however, set the record straight in the final time trial on Saturday when he won with a 1:16 advantage over Froome, who had expressed his frustration in the media at having to bow to his fellow Briton and risk his own Tour chances.

Froome may be given his opportunity to lead next year.

Belgium-born Wiggins in contrast showed his dedication to the team when he led Cavendish to a massive sprint finish in the 18th stage and on the finale.

Finishing one and two in the Tour and boasting the world champion was unimaginable for British cycling fans just a few years ago, when road cycling was viewed as a minority sport.

Britain’s Team Sky only came into being three years ago.

This year, almost all of Britain’s Sunday newspapers carried front page photographs of Wiggins and shortly after his triumph it was announced that London would be bidding to host the world track championships in 2016.

His Tour exploits were even saluted at the British Open golf championship in northern England where a yellow jersey was draped on a scoreboard near the 10th hole.

British fans wearing Wiggins masks lined the Champs Elysees as he cruised to victory with Britain now set for another cycling party at the London Olympics in the next three weeks, when Wiggins is among the favourites for gold in Aug. 1 time trial.

Photo: Sky Procycling rider and leader’s yellow jersey Bradley Wiggins of Britain (L) is congratulated by team mate Michael Rogers of Australia after the final 20th stage of the 99th Tour de France cycling race between Rambouillet and Paris, July 22, 2012. Wiggins became the first Briton to win the Tour de France when he claimed the 99th edition of the greatest cycling race on Sunday. REUTERS/Jean-Paul Pelissier