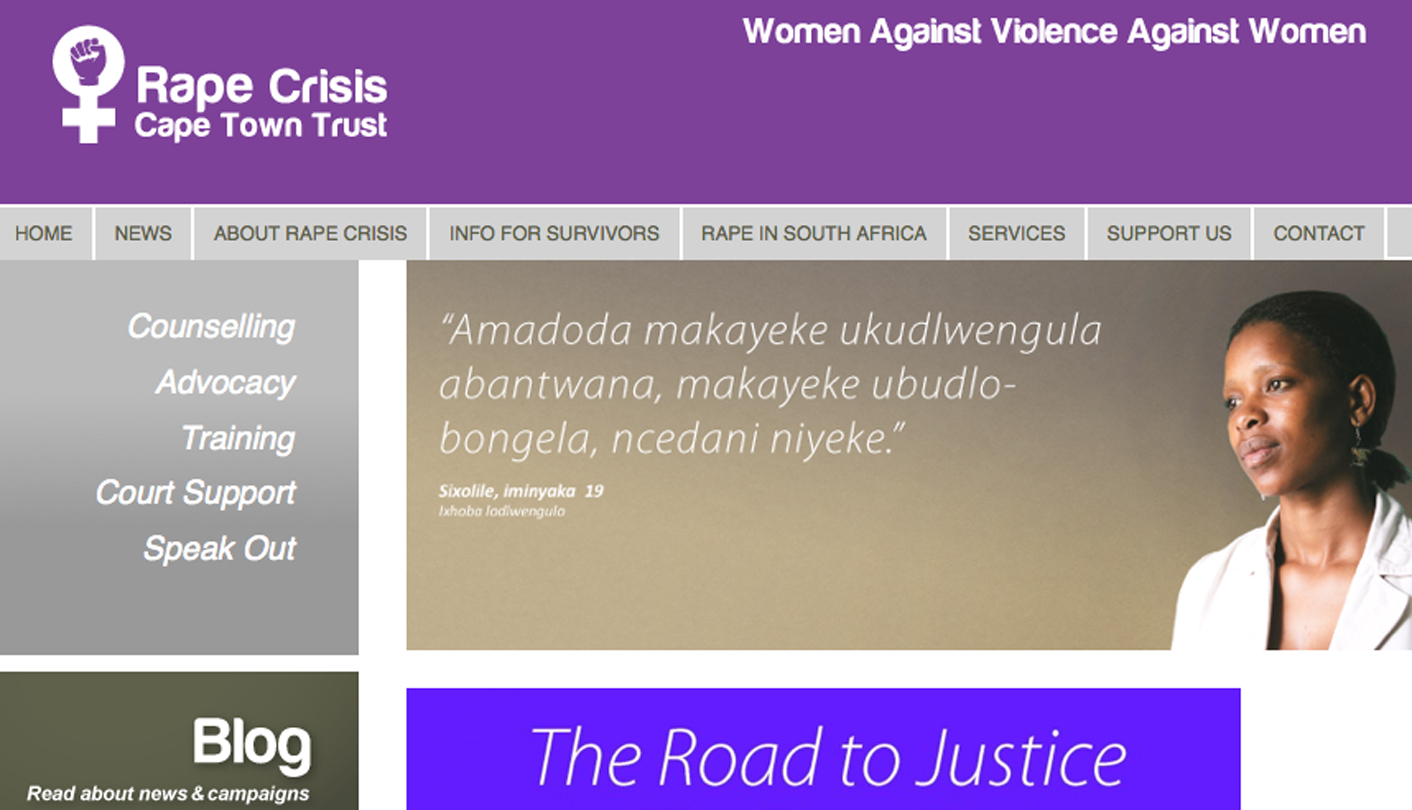 South Africa’s oldest rape support organisation, Cape Town’s Rape Crisis, has been forced to retrench all of its staff due to funding difficulties. Though it will continue running a reduced service with the aid of volunteers, its difficulties highlight a wider question about who should be footing the bill for the kinds of indispensable services offered by the likes of Rape Crisis. By REBECCA DAVIS.

For 36 years, Rape Crisis has been the first number to call for many Capetonians who have experienced sexual assault. Their team of 16 employees and 80 volunteers has provided both practical and emotional support to rape survivors, stepping in to fill the gap left when government resources fall short. But as of the beginning of July, a lack of funding has meant that retrenchment notices were served from the board of trustees to the organisation’s entire staff, with the exception of director Kathleen Dey.

Dey was putting a brave face on things to the Daily Maverick on Monday. “Our services have always been largely volunteer-staffed, and the quality of our volunteers compares favourably with professionals in many cases,” she explained. “It’s the support and co-ordination of their efforts that we are going to have to figure out.”

Dey will keep things running until the end of February 2013, after which point the organisation may have to re-assess the feasibility of continuing to operate.

“Rape Crisis sees itself first and foremost as a bridge between the rape survivor and the criminal justice system,” read the organisation’s last annual report. It is estimated that as few as one in nine women who have been raped in South Africa actually report the crime to the police. Reasons for this under-reporting include the pervasive stigma attached to rape, the possibility of police insensitivity, and the fear of recriminations from the perpetrator, particularly if they are known to the victim.

For this reason, some of the most important work undertaken by Rape Crisis aims to encourage the reporting of rape and to support rape survivors taking their case through the justice system. To this end, they offer a 24-hour telephone counselling line for women who have been raped (and their partners and families), pre-trial advice for rape survivors going to court, and support throughout their cases.

“Most rape survivors have no idea what their role will be like in a court case and, even for the most self-assured individual, that process is likely to be traumatic,” she told the Daily Maverick. “Rape Crisis does everything from showing survivors pictures of what the court will look like beforehand to accompanying them during the trial.”

According to its last annual report, between 2010 and 2011, the organisation provided court support for 1,532 cases in Cape Town’s courts. Such was their positive impact in this regard that some prosecutors requested postponements of cases in order to allow rape survivors to undergo counselling and consultation with Rape Crisis before continuing with the trials. In that same period, the organisation provided 4,025 sessions of phone counselling – via its three offices in Observatory, Khayelitsha and Athlone. “The counsellors there are some of the most amazing, positive, inspiring people I’ve ever encountered,” said Thorpe.

Of course, the organisation would also like to see reduced incidents of rape in the first place, so other aspects of their work have included research about rape in South Africa, workshops in schools and communities, and advocacy around sexual offences legislation. Unfortunately, these latter aspects are likely to be scaled back after these staff losses, which is particularly problematic given that accurate assessments of rape prevalence in South Africa are often highly dependent on their research and analysis.

Rape Crisis has been undertaking this kind of work ever since being founded in 1976 by Anne Mayne in the wake of her gang rape in Cape Town in 1973. In her account of the organisation’s history on their website, she describes the trauma she experienced after her assault as a result of the fact that she did not have access to any kind of counselling. It was only after reading Rape – The first sourcebook for women, Mayne writes, that she realised that “I was not to blame and I was not alone. I became determined to try and get in contact with women who understood this kind of male violence. I believed that then I would be able to speak out and stop feeling alone, dirty and unacceptable to ‘normal society’.”

Mayne worked without a salary for 12 years to establish Rape Crisis, which eventually grew into the three offices which exist today, and saw organisations develop out of it in other cities – such as People Opposing Woman Abuse in Johannesburg – as a result of volunteers who had originally worked with Rape Crisis in Cape Town.

Rape Crisis has provided such an indispensable service to Cape Town for so long that it seems almost unthinkable to consider that it may be on its last legs. But this is the reality the organisation faces if it is unable to resolve its current funding woes. The crisis has been coming for some time. In November last year, the Rape Crisis Cape Town Trust announced that it might have to curtail some of its services due to funding problems partly caused by EU donors re-directing funds to other African countries seen as more in need than South Africa.

The NGO has not been alone in these difficulties. In May, Cape Town’s Saartjie Baartman Centre for Women and Children – which provides free shelter, legal and counselling services for abused women and their children – announced that they faced imminent closure due to a lack of funding. “Going public with our plight is our last hope as a final appeal to keep the centre open and functioning in 2012,” the centre’s director Synnov Skorge said at the time. After an aggressive fundraising campaign by the centre’s supporters, and a grant of R1,1-million from the Department of Social Development, the centre has been able to keep its doors open for the time being, though the future is insecure.

The funding problems experienced by these organisations is a source of great frustration to many working in civil society, since – viewed from one perspective –  the work they do effectively picks up the slack from government.

“Given the epidemic proportions of violence against women in South Africa, it is an indictment of government’s attitude towards services for rape survivors that Rape Crisis has had to retrench all its staff – especially because Rape Crisis provides the very services that government itself is responsible for, but fails to provide effectively,” the Women’s Legal Centre’s Sanja Bornman, told the Daily Maverick. “The state should have stepped in and provided emergency funding. Civil society is fed up with the irrational funding practices of government and the National Lottery.”

The Western Cape department of social development did not respond to the Daily Maverick’s request for comment on the matter, but in November last year spokeswoman Melany Kuhn told the New Age that the department had to weigh Rape Crisis’s applications for funds against those of the 1,902 other NGOs in the province that the department also funded with a budget of R628-million. This year the department continued to support Rape Crisis, but the funding provision was cut by about a third.

When it comes to government funding, Rape Crisis director Dey says the problem is partly that it’s difficult to get reliable statistics on violence against women, therefore budgets are set unrealistically low.

“But the main question is: who will take responsibility for funding the kinds of services provided by Rape Crisis, the Saartjie Baartman Centre and so on?” Dey asked.

She said the reason the government provides funding for these NGOs in the first place is because of the “unspoken contract” which holds that they have expertise and resources to provide services that the government cannot – so government essentially contracts them to fill the gap.

ANC Women’s League spokeswoman Troy Martens told the Daily Maverick that the Women’s League’s “principal position” is that, given the magnitude of the rape crisis in the country, “it is in the interest of provincial government to ensure that they unveil their programme of supporting needy NGOs and form partnerships with established NGOs,” assuming these organisations ensure good governance and accountability.

However, Martens said the league “also appeals to the private sector to start using their corporate social responsibility to support organisations which empower and support women survivors of sexual crimes”.

Dey said that the corporate sector has been very supportive of Rape Crisis, but that there is often a reluctance to financially contribute to initiatives which are seen as the responsibility of the government.

The same applies to individual donations – in addition to people having less cash in the current climate, there’s the fact that taxpayers often feel they have already paid for services that should be delivered.

Rape Crisis’s annual operating budget is about R6 million, which Dey said is difficult to reduce because “the service we deliver is really quality. It’s based on establishing a relationship with a rape survivor. To achieve that, we can’t afford to lose expertise.”

But beyond this, the service the organisation provides is as much to government as it is to rape survivors. “We know that reported rapes are the tip of the iceberg. What organisations like us can do is monitor prevalence. If we are there, that is a mechanism for government to keep its finger on the pulse of what is actually going on,” she explained. “They need us as much as we need them.”  DM