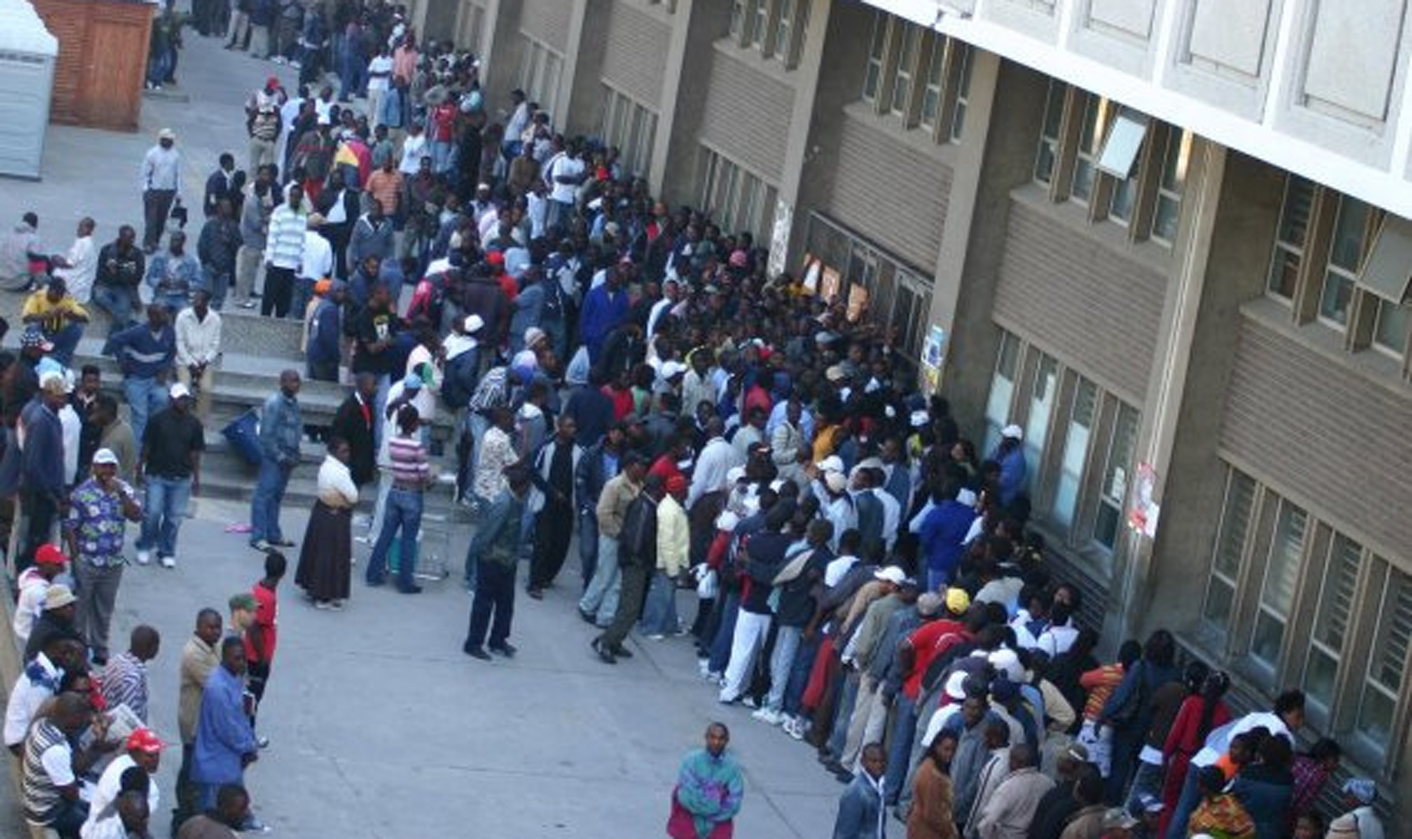 This country beckons like a land of milk and honey for gay and lesbian people who flee other African countries, where homosexuality is criminalised. These refugees run to South Africa with a dream of living in a more humane society but, though our Constitution outlaws discrimination, the lived reality for asylum seekers is very different. By MANDY DE WAAL.

Roy is a gay man who used to live in Uganda, a country where homosexuality is criminalised. “I entered South Africa on New Year’s Eve 2009. On 1 January 2010, I travelled from Johannesburg to Cape Town. I saw this beautiful city from the distance and I thought, ‘This is where I’m supposed to be’.”

From a constitutional perspective, South Africa appears to be a progressive beacon to Lesbians, Gays, Bisexuals, Transgender and Intersex people living on a continent where homosexuality is illegal in 38 out of 54 African countries.

The same year that Roy left his home country, Uganda’s parliament introduced an “Anti-Homosexuality Bill”, often referred to as the “Kill the Gays Bill” in the media. The bill is a deadly extension of an existing law (Section 140 of the Ugandan penal code) that outlaws “carnal knowledge of any person against the order of nature” and carries a sentence of up to 14 years’ imprisonment.

In a direct attack on freedom of expression, the bill would further outlaw publishing information on homosexuality and criminalise the work of LGBTI activists. The bill has been quashed many times, but it repeatedly appears back in parliament and is used as a lobbying tool by both politicians and religious leaders.

Earlier this month, the Ugandan Joint Christian Council (an association of Orthodox, Catholic and Anglican bishops) reared its ugly head to push for the bill to be made law. The religious council’s injunction to the Ugandan parliament is that homosexuality is “an attack on the Bible and the institution of marriage”.

In a country that’s predominantly Christian (about 85%), religiosity has a significant influence on cultural attitudes. The result of the church’s push to “demonise” homosexuality has seen wide-scale persecution of gays, lesbians and anybody else whose sexuality is deemed to be morally “deviant”. For Roy, the attitude towards gays and lesbians in Uganda created an experience that was a frightful, living hell.

“I didn’t know I was gay when I was younger, I just knew that I wasn’t attracted to girls. In Kampala, nobody mentioned homosexuality. Growing up, I never met anyone who was openly gay. You only heard about it on the radio, distantly, in passing,” Roy tells People Against Suffering, Oppression and Poverty (Passop), an NGO that works to protect the rights of refugees, asylum seekers and immigrants in South Africa.

As Roy became aware of his sexuality he had to keep it secret for fear of reprisal, but after finishing his schooling and university, Roy moved to the city with gay friends he’d met at school.

“We were only fully honest with each other. Of course, we couldn’t completely hide who we were: people suspected us of being gay. The way they looked at us – we knew they’d beat us if they found us in a dark corner. In some areas, strangers threw stones or boiling water. They shouted, ‘We hate you, and next time we’ll hurt you!’ Certain shopkeepers wouldn’t serve us,” Roy says.

Roy was fortunate to get a job as a waiter at a Muslim luxury hotel where he worked hard and was good at his job, but soon rumours started circulating about his sexuality. After being confronted about being gay, Roy was fired. “It hurt me terribly to be dismissed from work I’d done so well, but I didn’t know that worse days were ahead.”

Soon afterwards, Roy met a man he fell for. “He told me that we could start dating – but first, he began to ask me for money. I always gave him something, and he always disappeared. We never slept together.”

One day this man asked Roy if he could visit. But instead of a romantic event the meeting turned into an ambush when a lynch gang appeared outside his door. “Six men stood there: one with a gun, one with a video camera, and one with a machete. I turned to the guy I’d been seeing. He had set me up.”

The man with the machete slashed Roy from his shoulder to his armpit on each arm. “I’ll cut off your arms,” the man told Roy, who was familiar with this notorious gang. They had already killed one gay man and brutally beaten another.

Roy pleaded for his life and offered money. “They wrapped my wounds in rags, and took me to the ATM. I drained my account for them. They left me bleeding on the street in the sun.”

With his arms wounded Roy couldn’t work. “The physical pain was terrible, but the fear was worse. I believed the men would come back, push into my house, and kill me.” Roy heard of a tourism conference in Port Elizabeth, registered for the event, sold all his belongings and made his way to South Africa.

“With my visa in hand, I bought a one-way bus ticket and left Uganda. I knew it would be forever. We passed overland for a week. I was tired, lonely. I watched Zimbabwe and Zambia go by, my mind on the past.” Like many refugees who flee to this country, when he arrived in “the beautiful city of Cape Town” he felt like he’d arrived to a home of sorts, to a country where he could feel more safe.

If only it was true that South Africa opened its arms to LGBTI refugees. The reality is that asylum seekers from Africa face a double stigma here. In the first instance, this country’s tendency towards xenophobia makes asylum seekers unwelcome. In the second instance, LGBTI refugees are persecuted by cultural attitudes driven by traditional and religious mores.

“Many refugees flee to South Africa to escape persecution or fear of persecution, and when they apply for refugee status officials at Home Affairs ridicule and persecute them,” says Guillain Koko at Passop’s LGBTI refugee advocacy and support project.

A recent survey conducted by the NGO amongst LGBTI refugees shows people who flee to South Africa to escape gender prejudice, find persecution here as well.

Interviews with 25 such refugees from different African countries who are now living in Cape Town – supposedly SA’s gay capital – reflects the kind of discrimination these asylum seekers face.

The refugees from Uganda, DRC, Somalia, Burundi, Cameroon, Angola and Ethiopia say they face prejudice when trying to find accommodation and shelter, don’t receive help or support from the SAPS, and are discriminated against in places of work (if they can find suitable employment).

About 90% of the LGBTI refugees surveyed are unemployed. Of the 10% surveyed who hold jobs, only 4% work full-time and 6% work part-time. Most do not have access to the kind of employment that is suitable to their skill set or that corresponds to their area of studies.

The report states that refugees surveyed felt that townships in Cape Town were less safe than the suburbs and the city centre, and that “integration into broader society for LGBTI refugees and asylum seekers’ remains elusive because of homophobic attitudes expressed more often by black South African and coloured people”.

The prejudice starts the minute LGBTI refugees and asylum seekers enter the country. “Regarding the issue of documentation, many of the interviewees reported that they were mistreated by DHA (Home Affairs) officials, security personnel and interpreters when they went to apply or renew their permit.  Of the 25 LGBTI persons interviewed, only two have received refugee status,” the report states.

“In the interviews that refugees have at Home Affairs, there are questions that identify their sexuality. In one instance when an official found out a refugee was gay he said to the refugee: “Why are you gay. Why can’t you stop being gay.” Another official found out a refugee was a lesbian and pushed her to try and get sexual favours. In the refugee centres people are vulnerable and will do anything to get their status, so sexual harassment and pushing for sexual favours is rife,” says Passop’s Koko.

A lesbian interviewed by the NGO tells of her experience with Home Affairs: “Sometimes they laughed at me with the interpreter and tried to persuade me to cease being gay. They wanted to know more about how I felt being attracted to people of the same sex as me.”

In another interview a gay asylum seeker from DRC says: ‘‘They gave me a form to fill out. I said I left my country because I faced persecution in my country for being gay. The woman questioned this, she was looking at me like: ‘Why is this gay Congolese coming to South Africa?’ She didn’t give the papers to me, she threw them at me. Another girl there told me that she wanted me to change.”

The terrible irony is that the legal position towards LGBTI people locally is the most progressive in the world, and the equality clause in our Bill of Rights is a global breakthrough in terms of expressly prohibiting discrimination on the grounds of sexual orientation. Further, gay marriages are sanctioned following the Civil Union Act of November 2006.

But the lived reality for LGBTI refugees and asylum seekers fiercely contradicts this law. People flee homophobic countries like Nigeria, Uganda, Egypt, Botswana and Liberia for a better life in South Africa. But when they arrive here their hopes and dreams are crushed because this isn’t a land free of hate crimes or homophobia.

A gay asylum seeker from Cameroon spoke to Passop about his expectations of this country and the reality he subsequently experienced:  “I came to South Africa to get rid of the harassment and so that I would be free to live the lifestyle I wanted. But some people are homophobic here too.”

And a gay Ethiopian man describes being attacked by other refugees and failing to get help from local law enforcement agencies: “I realised that human rights in South Africa are only written in legal texts and the Constitution but are not practised in real life. That’s why I was so disappointed, upset and shocked by what I experienced.” DM

Photo: Chaos at the refugee centre by PASSOP