Izikhokho: The homegrown cartoon series where anything can happen 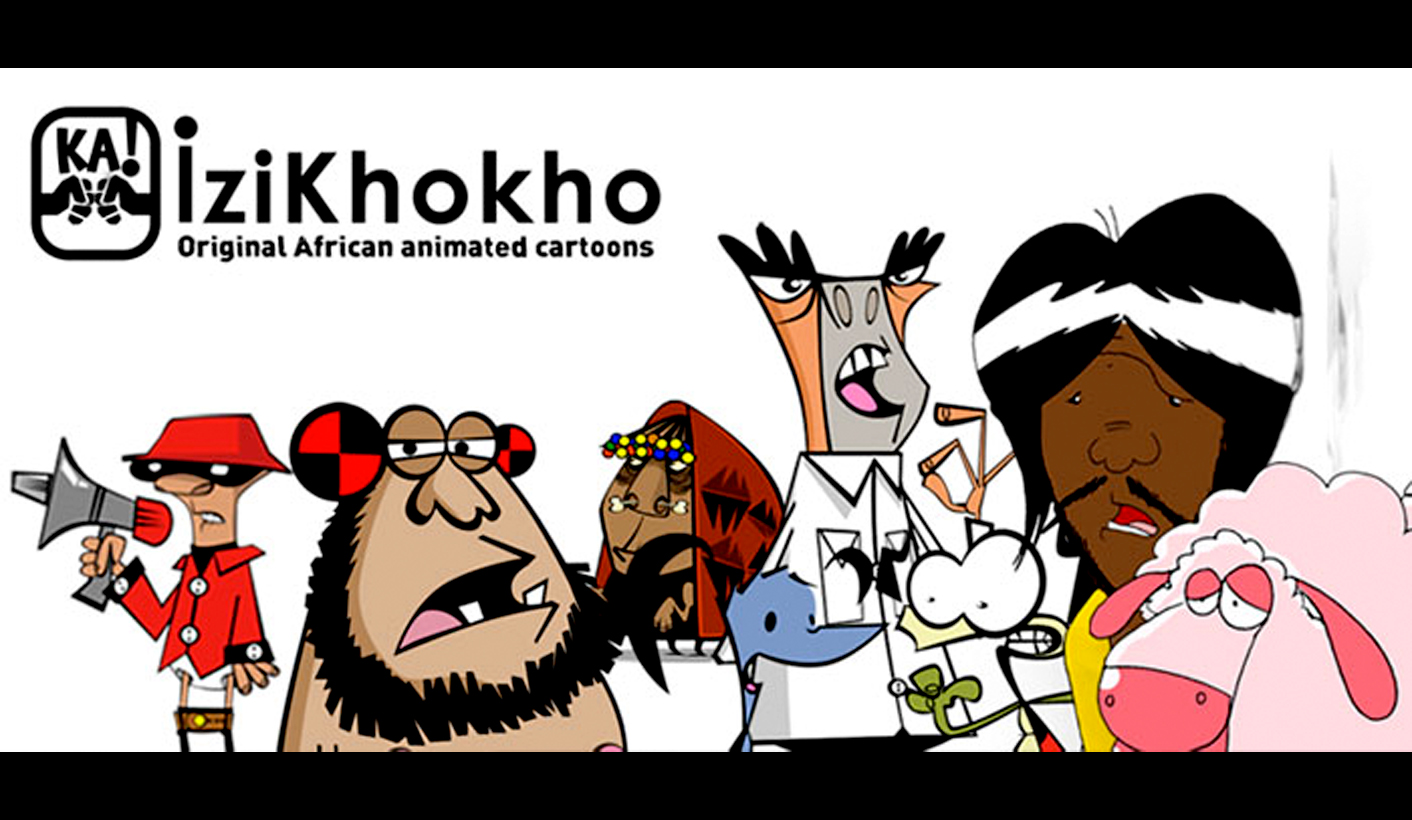 Johannesburg-based cartoonist Mdu Ntuli has hit the big time: his series Izikhokho has been picked up by Comedy Central Africa Network to be aired weekly. REBECCA DAVIS explores the world of a comic artist who pokes fun at everything from ANC corruption to unfortunate-looking mermaids.

A sniper phones his victim and threateningly instructs him to confess his darkest secrets. Then he asks the victim to please call him back because his airtime is running out.

A black Jesus is given an RDP house in Limpopo, but is so scared of becoming the victim of witchcraft that he decides to “witch-proof” himself through donning a Zion Christian Church badge, a cow-hide wristband, a “waist string thing” and burning “those Indian things” (incense sticks). He ends up getting struck by lightning.

In the mafia headquarters of The Godfather, an unexpected visitor arrives: a worker from the Census, trying to count the members of the household. The Don proves unco-operative. “Ah gents, you are killing me even,” protests the dutiful Census official as four guns are pulled on him. “Okay, that’s Luigi, L-U…”

Welcome to the world of Izikhokho, the animated cartoon series created by Mdu Ntuli and set in a universe that manages to be both distinctly South African and utterly surreal at the same time. It’s a theatre in which anything goes: if some episodes are topical and straightforward narratives, others leave you reeling from their sheer weirdness. Searching for a dominant thematic preoccupation or coherent underlying message is a thankless task here, but that’s part of the fun of it all.

Some episodes poke fun at the intersection of modern life and traditionalism in South Africa – in an episode entitled Manhood School, a group of initiates are shown screaming in terror while a doddery blind doctor wanders around chopping off door-knobs and tree-stumps with a fearsome circumcision knife.

Other episodes satirise current affairs – The Dirty Tape sees the mysterious sniper phoning up one of the police officers caught in the Sowetan’s sex-tape scandal and telling him that, since the policeman spends his tax money playing with women, he would like a link to “season two of your series because it’s very sexy”.

Then there are those episodes that deal with standard cartooning fare: thwarting plots and foiling bad guys, though the series certainly lacks a consistent moral centre, in the sense of good triumphing over evil. There are few feel-good endings to be found, and often no solid conclusions whatsoever: the overall effect is mischievously anarchic.

Ntuli rejects the idea that there are any overarching themes to the series at all. “The power of Izikhokho lies in the fact that there are no rules,” he explains to the Daily Maverick. “It’s just about creating fiction. Sometimes we will cover a particular issue, but mainly it’s about making playful cartoons.”

There are three main elements to the Izikhokho series. The most surreal of these is the duo of Bob and Queng, mysterious non-human creatures who engage in exploits described by Ntuli as “random”. Bob is portrayed in a number of episodes as being fixated on the buttocks of the world’s ugliest mermaid. In another, he is shown in bed with talk-show host Noeleen Maholwana-Sangqu. It emerges that Bob is cuckolding Maholwana-Sangqu’s husband – a donkey.

Then we have Zuluboy, a Zulu taxi driver, and his alien friend Rudolph, who battle to keep the secret to South Africa’s social harmony – “Umuti”, which seems to be a liquid amounting to distilled ubuntu – safe from an evil Swazi called Mnaka.

Lastly, there’s “Jesus of the ANC” and his sidekick Mbuzi, a sheep, who are generally the mouthpieces for the most pertinent political satire: in one episode Jesus is shown persuading Zuluboy to transfer all his money to him. Ntuli explains that the Jesus of the ANC character grew out of Jacob Zuma’s 2008 statement that the ANC “will rule until Jesus comes back”.

Ntuli began drawing as a child, but it was only as a Wits student that he began to consider that making comics could be more than a hobby. Working as an intern for Madam & Eve co-creator Rico cemented his desire to become a full-time cartoonist – there’s still a touch of Madam & Eve styling visible in the drawing of his characters. Comic strips for the Sunday Times and Y-Mag followed, and in 2003 he set up his own cartooning company, Mdu Comics.

Ntuli says he was influenced by American comic strips like Bill Watterson’s Calvin & Hobbes – an unexpectedly “vanilla” inspiration, since Watterson’s strip plays it considerably safer in terms of content and themes. He also cites Todd McFarlane’s comic book superhero, Spawn, as an influence and, on a local platform, the work of political cartoonist Zapiro. An interest in animated cartoons was only fostered later: animation, says Ntuli, was “just something I was trying on my own”.

But it’s animation in which Ntuli seems destined to really make a name for himself. As of last week, 19 episodes of Izikhokho will be screened by the Comedy Central Africa Network weekly on Monday nights. They will be flighted directly after episodes of South Park, which is hardly surprising – these days, all adult-targeted satirical cartoons are inevitably subjected to a South Park comparison.

The two series do share an iconoclastic spirit and a fondness for bodily fluids: in one episode of Izikhokho, Jesus of the ANC is shown vomiting after seeing one of the DA Youth’s posters featuring an interracial couple (though viewed through the satirical Izikhokho prism, the tagline on the poster becomes: “Let’s make more Trevor Noahs!”)

Don’t suggest to Ntuli that South Park and Izikhokho are similar, though – “I don’t like that comparison!” he laughs. “I don’t want to be seen as someone trying to do work like South Park,” he explains. “Izikhokho is its own thing, totally different.”

Ntuli’s cartoons made headlines last month after the publication on YouTube of an episode called Jesus is a Shangaan, where Jesus of the ANC visits a doctor for a DNA test. His DNA, the doctor finds, “does not match with God’s”. Instead, the doctor says, “There’s no easy way of telling you this. You are a Shangaan.” (Is the notion of diagnosing tribal identity from DNA a dig at Oprah Winfrey’s claim that a test had proved her to be Zulu?) Jesus is crushed by this news and, after failing to cleanse himself of his Shangaan-ness, commits suicide.

The episode caused two complaints to be laid at the Human Rights Commission, and a storm of controversy on social media. An irate letter to TimesLive on the subject read: “The joke (intended) here is not that Jesus is black, but that he is Shangaan. This stereotype is buried deep in Mdu and many others’ beliefs. It is an attitude seeded deep in rotten brains. I bet a strong bunch of the Zulus found it funny!”

Ntuli told the Daily Maverick that he believes negative responses to the cartoon came down to a problem of interpretation, because the point he was trying to make was precisely the opposite to the manner in which it has been received in some circles.

“I wanted to expose the ridiculousness of township stereotypes,” he said. “The problem was that for some people it was the first exposure to my work, so they didn’t understand the humour.”

The controversy around Jesus is a Shangaan does not appear to have daunted Ntuli in the slightest. Are there any topics he would consider out of bounds? “No,” he says firmly. “I’ll cover anything. As long as it’s funny.” DM