Analysis: Dear Heavens, please keep your God to yourself 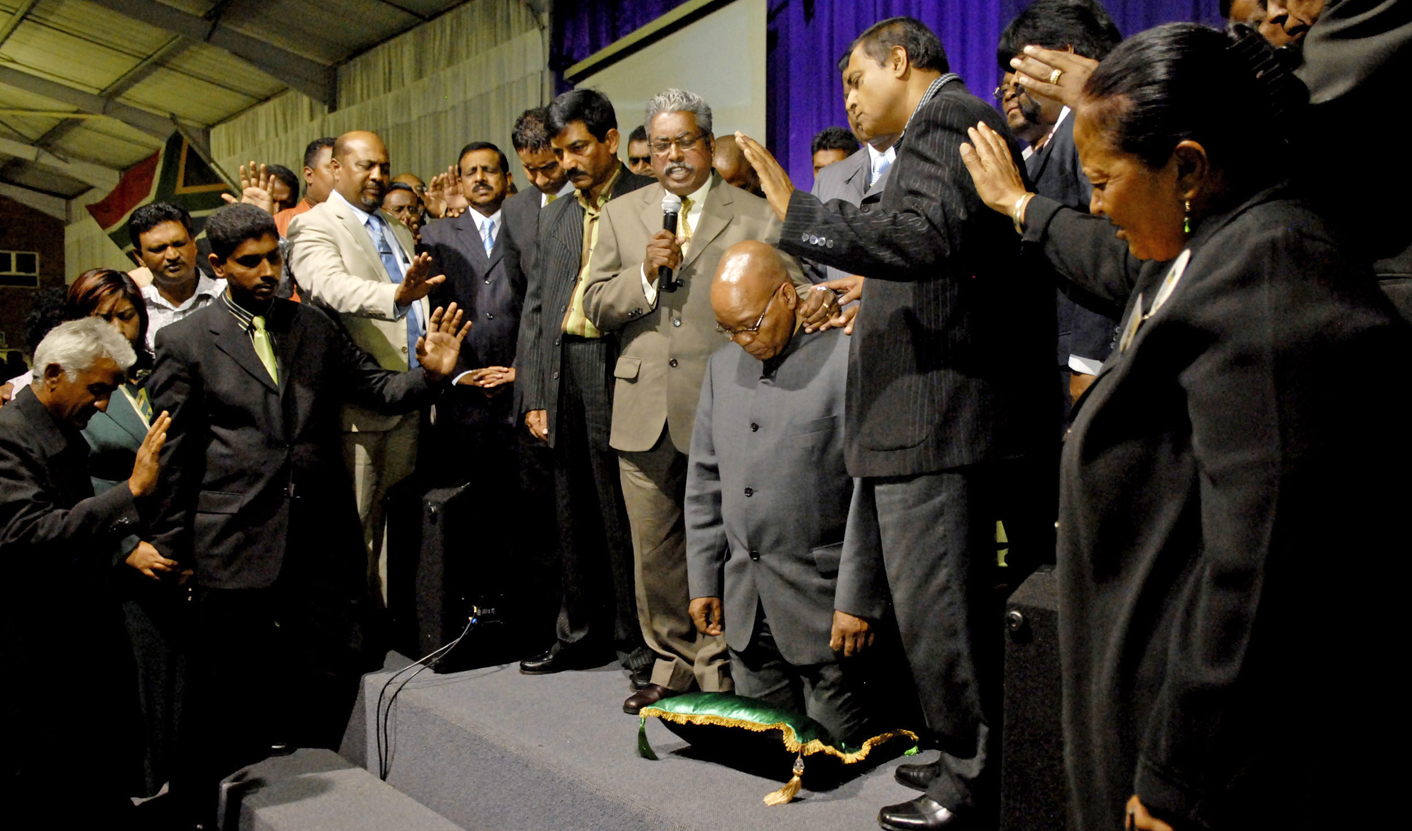 There has been much God-bothering lately. God gives us high-profile jobs, land and even makes us win sporting events, though he’s never mentioned when we lose. CHRIS GIBBONS wonders if so many public displays of religion are really necessary.

A leading Sunday newspaper says the new national police commissioner’s job is a “calling from God”. We’re shown pictures of President Jacob Zuma being blessed in a Soweto church. Springbok rugby players drop to their knees in prayer at the final whistle, in full public view. Soccer players cross themselves once, twice or three times – depending on where they come from – at every auspicious moment during a match. Are all these displays of religiosity truly necessary?

Between July 1789 and November 1793 the founders of the French Revolution attempted to rip Christianity out of the very fabric of France. It was a response to hundreds of years of oppression and corruption by the Catholic church, which, they felt, had sat on the neck of ordinary Frenchmen and women, extorting tithes and taxes, while selling easy tickets out of purgatory and into heaven. Buy a mass here, a relic there, or endow a church or abbey – just pass the cash and we’ll take care of everything for you!

No wonder, then, that Voltaire and the thinkers of the Enlightenment derided religion in its entirety. From them instead flowed ideas like the rights of man. It was their philosophy which underpinned the revolution, giving rise to oddities like the cult of reason and the cult of the supreme being. November 1793 saw the bizarre festival of the goddess “Reason” at Notre Dame cathedral. At various points during the revolution, Catholic priests were torn to pieces by the mobs, sent to jail or the guillotine and later despatched to penal colonies.

The revolution may not have ended in complete failure, but the attempt to suppress religion – Christianity, in this case – most certainly did.

When Napoleon came to power in 1799, he had already recognised that removing the yoke of the church from a peasant’s neck is one thing, expecting the same peasant to give up God is another entirely. A wily and cynical politician, Napoleon allowed the Catholic church to re-emerge and played it to his early advantage. For roughly the next hundred years in France, the clergy and the politicians jostled along in uneasy company until the passing in 1905 of a policy called Laïcité, the formal separation of church and state, particularly in schools.

It was this same policy, you may recall, that was invoked recently during the banning by the French of the Muslim headscarf from schools. Christian symbols, banned in theory from schools by Laïcité, but which had crept back in practice, were also re-banned.

The revolution and its anti-Christian purges are but one chapter in France’s very bloody religious history. South Africa’s Huguenot population and the town of Franschhoek sprang from one of the anti-Protestant pogroms, and anyone with a knowledge of Jewish history would be able to recount the shameful Dreyfus affair, the shadow of which still falls over modern France more than a hundred years later.

It was said that the policy of Laïcité, separation of church and state, would help smooth over these old wounds. Be anything you wanted to be in private – Catholic, Protestant, Jew, Muslim – but in public, in the life of the state, you would be simply French.

Given the awful impact of religions of all kind on human history, it’s a laudable goal.

Where would modern India and Pakistan have been without the grotesque and barbarous clashes between Hindu and Muslim that led to 1947 and partition? The relatively recent troubles of Northern Ireland would have had no fuel without Protestant and Catholic, although, in fairness, much of that hatred flowed as a result of a far earlier attempt in the 16th and 17th centuries by the English to eradicate their Catholic Irish subjects, much as you would exterminate a nest of rats.

The tensions of the last 60 years in the Middle East are driven by religion. Any attempt at a meaningful conversation with either Israeli Jew or Palestinian is always reduced to a petulant stamp-of-the-foot, “No! You don’t understand! God gave us the land!” Whichever side you support, this is the clinching, defining argument and it cannot be gainsaid.

Modern South Africa is far more diverse in terms of race, culture and religion than France has ever been at any point in either country’s history. Practitioners of public religious displays would do well to recall that the first round of talks at Codesa, which gave birth – eventually – to our democracy, almost failed to get underway at all because of a row over which prayers should or should not be said at the opening of each session. A similar row almost scuppered Codesa II.

As a nation facing great difficulty, including very high unemployment which fuels inter-racial tension, the profession of one’s religion at high-profile public events, attended by members of many different religions, might well give cause for offence. What, for example, would members of the Muslim or Jewish faiths have thought when Willem Alberts, Castle Lager Man of the Match in the first test against England 10 days ago, accepted his award with a ritual religious obeisance? Or members of the crowd who are atheists – where does all of this leave them? Is this something peculiar to members of certain Christian faiths? And why does no one mention God when the team loses?

Politicians, too, milk religion. Worst of all are the Americans, steeped in religiosity as well as religion. A candidate without God in the USA is unelectable – and that’s a very Christian God, by the way. Our own President Jacob Zuma misses no opportunity to be photographed in a church, though it’s not entirely clear to which church he personally adheres, or what its teachings say on the subject of polygamy. But we must assume that his God thinks it’s all okay, even if yours doesn’t.

Take religion out of it. There is no evidence at all, anywhere, that a belief system of any sort will make General Magwashi Phiyega better at catching crooks. Nor has President Zuma’s made him any better at service delivery. Right now it seems to be helping the Springboks, but they may find out soon enough that the All Blacks worship an even more powerful deity.

Keep it to yourself, keep it behind closed doors, share it with your friends if you need to, but the rest of us either couldn’t care less or find it deeply offensive. DM

Photo: President Jacob Zuma kneels as a pastor prays for him at a church in Phoenix, about 25 km north of Durban, April 14, 2009. South Africa was preparing for the polls on April 22. (REUTERS/Rogan Ward)