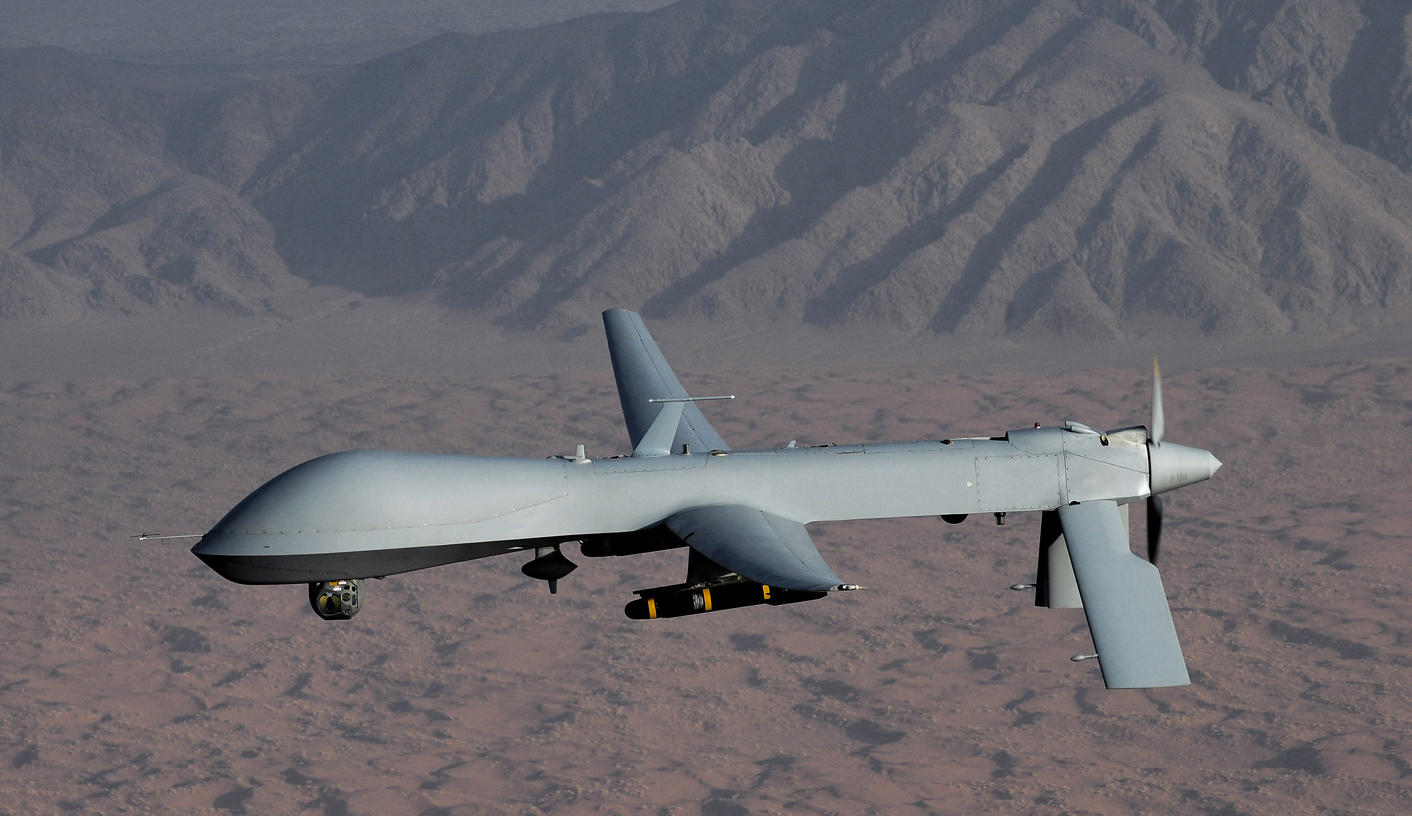 As Barack Obama’s first term in office descends into the cacophony of a re-election campaign, he may position himself as being good for the economy, but he is also acting like a strong man, the American president that hunted down Osama bin Laden. And it is Obama’s penchant for drone warfare that is coming under intense scrutiny. By KHADIJA PATEL

When US President Barack Obama was awarded the Nobel Peace Prize in 2009, it was in recognition “for his extraordinary efforts to strengthen international diplomacy and co-operation between peoples”.

He was the embodiment of the hope for a better world. After eight years of George W Bush at the helm of the purportedly free world, Obama was a breath of fresh air.

“Only very rarely has a person to the same extent as Obama captured the world’s attention and given its people hope for a better future. His diplomacy is founded in the concept that those who are to lead the world must do so on the basis of values and attitudes that are shared by the majority of the world’s population,” the Nobel committee gushed in admiration.

If the world was shorn of hope in the Bush years, then Obama seemed to teem with hope for a better world. He was literate. He was articulate. And he seemed to know his way around the world a lot better than Bush. He promised to end unpopular wars and the use of torture in the American penal system, and to close down the Guantanamo Bay detention centre.

He seemed to start off his reign in the Oval Office well enough, extending an olive branch to the Muslim world, inviting dialogue and friendship in a world deeply fractured by the war on terror. He had all the look of a man intent on changing the world through diplomacy and engagement. Three years on, all the hope Obama promised the world has dwindled into more of the same.

He has also made it “legal” to execute Americans without trial and expanded the country’s secret surveillance, preserved the CIA’s renditions programme, violated his promise to close down Guantanamo, and ruthlessly arraigned whistleblowers. Not for nothing did Aaron David Miller, one of Washington’s most esteemed foreign policy advisors, dub Obama “George Bush on steroids”.

But while Bush went gung-ho into war, Obama has opted for a quieter, less messy kind of war – the remote-controlled wars of the drone. In Pakistan, Afghanistan, Yemen, Somalia and even Libya last year, Obama acquiesced to an ever-expanding warfront by Predator drone, a remotely controlled, unmanned plane that hovers, undetected, two miles or so above the ground and then strikes with like an assassin in a darkened room.

In his book, Revolution Day, Rageh Omar describes the scene of a drone attack, reflecting on the surrealism of a remote-controlled war: “At times it was hard to believe that such destruction could be the work of mere mortals. The thunderclaps from the explosions, the eruption of fire, ash and smashed concrete and the towers of smoke seemed beyond human scale. How could all this come from young men and women sitting in some control centre at a coalition base, staring into computer screens and selecting targets thousands of miles away? The military planners guided the air war from quiet, air-conditioned bunkers in secret bases in rural England and from a specially built command centre in the Gulf state of Qatar. The banks of computers in these command centres were reminiscent of a dealing room in an investment bank. Could the officers or their senior commanders look beyond the screens and appreciate what “Shock and Awe” really looked like to the ordinary people who were forced to endure it?”

Omar was of course describing the scene of drone warfare during the Iraq war – the more public of the drone campaigns. The US government runs two drone programmes. The military’s version, which is publicly acknowledged, operates in the acknowledged war zones of Afghanistan and Iraq and targets enemies of American troops.

The CIA’s programme, however, is cloaked in more secrecy. It is aimed at terror suspects around the world, including countries where US troops are not based. The CIA refuses to provide any information to the public about where it operates, how it selects targets, who is in charge, or how many people have been killed.

Indeed, until February this year the Obama administration refused to even acknowledge the existence of the CIA programme. Obama claimed the drone campaign in Pakistan was a “targeted, focused effort” that “has not caused a huge number of civilian casualties”.

The first two CIA air strikes of the Obama Administration took place on the morning of 23 January 2009 – his third day in  office. Within hours, it was clear that the morning’s bombings, in Pakistan, had killed an estimated 20 people.

In one strike, four men, all likely affiliated with al-Qaeda, died. Score, for Team Drones. But in the second strike a drone targeted the wrong house, hitting the residence of a pro-government tribal leader over 9km outside the town of Wana, in South Waziristan. The blast killed the tribal leader’s entire family, including three children, one of them five years old.

Last week, a US drone strike in North Waziristan, Pakistan, killed 15 people, including senior al-Qaeda leader Abu Yahya al-Libi. And, with a recent New York Times report highlighting the Obama administration’s decision-making over the programme, the CIA’s covert war in Pakistan’s tribal areas has once again taken centre stage in discussions of the American war against terror. After a remarkable lack of debate, there is now a growing uneasiness with the absence of transparency and accountability in drone warfare.

The CIA programme may have been initiated by Bush but it is Obama who has expanded it to Yemen and Somalia. During his first nine and a half months in office, Obama authorised as many CIA aerial attacks in Pakistan as George W Bush did in his final three years in office.

In Pakistan, there is growing opposition in its parliament to the drone strikes, but the military and government have long offered some support for the programme. A Pakistani army chief has in the past even asked for more strikes. Furthermore, until recently, drones often flew out of Pakistan, and human intelligence support for the strikes continues to come from Pakistan.

Even as senior Pakistani officials apply for further participation in the decision-making processes that govern these strikes, the strikes may well have taken out a good many enemies of the US, but it has also seeded a virulent antipathy for the US government in Pakistan’s hinterlands.

In Yemen, Obama has tried to stunt the influence of al-Qaeda through a barrage of drones and missile strikes spanning more than two years. Yet, despite the successes this campaign has boasted, notably the scalp of al-Qaeda second-in-command Anwar Al-Awlaki – the organisation appears to have grown unabated. The efficacy of the programme is disputed but in its continuance, it is the deaths of nameless, faceless “militants” that proliferate our news.

The New York Times explained that Obama’s rhetorical emphasis on avoiding civilian deaths “did not significantly change” the drone programme, because Obama himself simply expanded the definition of a “militant” to ensure that it includes virtually everyone killed by his drone strikes:  “Mr Obama embraced a disputed method for counting civilian casualties that did little to box him in. It in effect counts all military-age males in a strike zone as combatants, according to several administration officials, unless there is explicit intelligence posthumously proving them innocent.

Counterterrorism officials insist this approach is one of simple logic: people in an area of known terrorist activity, or found with a top al-Qaeda operative, are probably up to no good. “Al Qaeda is an insular, paranoid organisation — innocent neighbours don’t hitchhike rides in the back of trucks headed for the border with guns and bombs,” said one official, who requested anonymity to speak about what is still a classified programme.

But the drone programme exists. “Drones have not caused a huge number of civilian casualties”, Obama said. “This is a targeted, focused effort at people who are on a list of active terrorists trying to go in and harm Americans”. The drone campaign is resonant of what Miller calls a “post-911 consensus” – a doctrine that dictates we kill them before they come kill us. It further feeds into the logic of us and them, self and other, polar realities that breed yet more conflict.

The Bureau of Investigative Journalism reports between 2,464 and 3,145 fatalities from drone attacks in Pakistan, of which 482 to 830 have been civilians. According to the New America Foundation, estimated civilian fatalities range from 293 to 471. The Obama administration’s novel definition of combatants means innocent civilians will inevitably be targeted when suspected militants hide amongst them.  Despite the hoopla surrounding the efficiency of drone attacks, the number of civilian casualties keeps increasing.

Legal experts point out that these strikes are far removed from the dictates of international law. Others point out that a new front for war waged by the US must first be passed by Congress. And yet Obama, the champion of dialogue, the man of hope, has persisted with the programme. How far we’ve come. DM