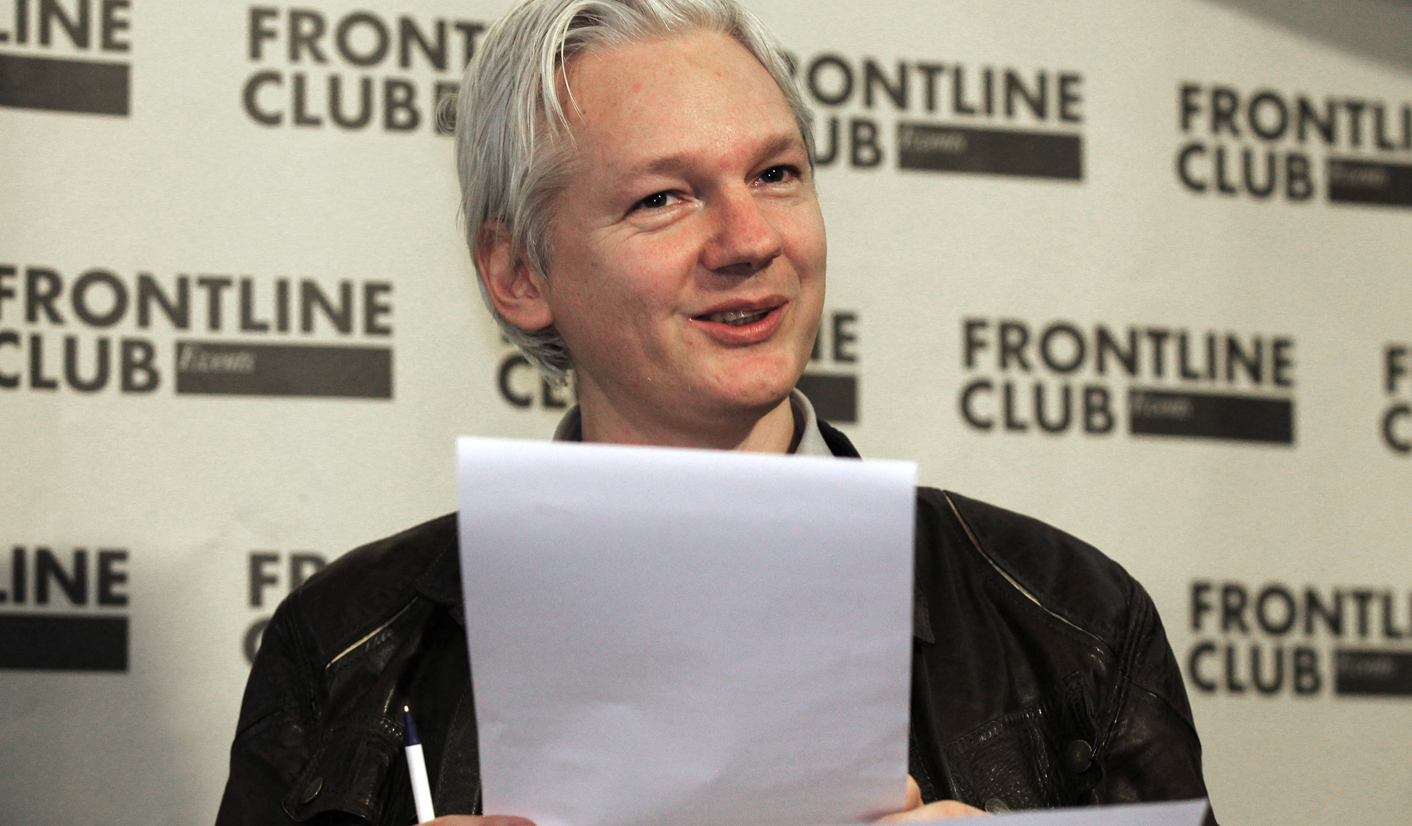 On Wednesday, after a marathon legal battle, WikiLeaks founder Julian Assange will know whether he is to be extradited from the UK to face sexual assault charges in Sweden. If he loses, his next stop may be the US, where potential espionage charges await. But Assange already gave up the moral high ground in April, when he threw in his lot with Vladimir Putin. By KEVIN BLOOM

It is now exactly 18 months since five international newspapers, hand-picked by WikiLeaks founder Julian Assange, began releasing the first of the 251,000 American diplomatic cables in a worldwide exposé that came to be known as Cablegate.

It is also, as the always-on WikiLeaks clock reminds us, 542 days that the organisation has been financially blockaded without process, 539 days that Assange has been under house arrest without charge, 736 days that Bradley Manning (the source of the cable leak) has been in jail without trial, and 622 days that a secret Grand Jury has been active on WikiLeaks in the United States.

And at last, it seems, we’ve got a full understanding of Assange’s agenda. Nowhere was it more obvious than on the launch of his show The World Tomorrow, which premiered in April on the cable news network Russia Today.

As is well known by now, Assange’s first guest was Hassan Nasrallah, leader of Hezbollah, who hadn’t given an interview to Western media for six years. Equally well known is that it was a journalistic coup that disappointed scores of WikiLeaks supporters.

For starters, there was nothing combative or even subtle about Assange’s interview stance, just a litany of softball questions that opened with statements like: “You have fought against the hegemony of the United States.”

The lionisation of Nasrallah, who on the show defended the regime of Syrian despot Bashar al-Assad, continued throughout the half-hour slot, and found its apotheosis in this doozy: “As a leader in war, how did you manage to keep your people together under enemy fire?”

Then there was the fact that the show’s crew, in an ironic twist, decided to blur their identities in the credits, a decision explained by the following statement: “The 1st Amendment in the US and its protection of journalists is under assault by the US government and we have redacted the names of the crew in protest.”

Lastly, and linked to the above, there was the venue of the show itself – Russia Today, the public relations organ of the Kremlin and Vladimir Putin, an administration that WikiLeaks itself once described as a “virtual mafia”.

The Guardian’s former Russia correspondent Luke Harding, who was expelled from the country for writing things the Kremlin didn’t like, summed it all up with these cutting words in the Irish Times:

“It seems extraordinary that Assange – described by RT as the world’s most famous whistleblower – should team up with an opaque regime where investigative journalists are shot dead (16 unsolved murders) and human rights activists kidnapped and executed, especially in Chechnya and other southern Muslim republics. Strange and obscene.”

To give Assange the benefit of the doubt, it could be that he chose to go with RT because he had no other option. He knows as well as anybody that the major American and British networks are not as free from political and economic interference as they would like their viewers to believe. Also, the financial blockade imposed by Bank of America, Visa, MasterCard, PayPal and Western Union in December 2010 has cost WikiLeaks 95% of its revenue.

The blockade, which came into force within 10 days of the launch of Cablegate, was found by the US government itself to be devoid of any legal or democratic precedent – but was instituted by politicised US finance companies nonetheless. As a result, WikiLeaks has been running on cash reserves. It no longer has access to tens of millions of pounds in donations that doubtless would have come in post the cable leak. A graph on its website shows that WikiLeaks received 800,000 euros in December 2010. Since then, the revenue from donations has been almost nil.

Still, one has to ask whether, by going with RT, Assange has forfeited something money can’t buy: his organisation’s credibility. From inception, the strength of WikiLeaks was to be found in its independence, its freedom to unravel and expose the lies and half-truths trotted out by Western governments unfettered by any links – economic or otherwise – to the power blocs at the core of such governments.

It was this operational philosophy that enabled him to release a secret video of US Apache helicopters opening fire on mostly unarmed civilians in Baghdad in 2007. Likewise, it was this philosophy that enabled him, in 2008, to leak documents detailing the US Army’s procedures at Guantanamo Bay, where some prisoners were proven to be off-limits to the staff of the Red Cross.

And it was this philosophy that enabled him to ask, in an article entitled The Hidden Curse of Thomas Paine: “What does it mean when only those facts about the world with economic powers behind them can be heard, when the truth lays naked before the world and no one will be the first to speak without payment or subsidy?”

At the very least, his association with RT means that Assange does not get to write such words with the force and weight that he once did. The financial blockade, illegal as it appears to be, might have forced his hand by sending him to the only English-language global news network that would take him, but that neither excuses nor changes the fact: Assange has consciously placed himself and his organisation in the pockets of Vladimir Putin, easily the most repressive and undemocratic leader in the G-8.

On Wednesday, Assange will find out whether he can be extradited from Britain to Sweden, as the Supreme Court – his final venue of appeal under UK law – hands down judgment on a case that has been underway for years. Assange is wanted in Sweden for what seem to be very thin allegations of rape and sexual assault, and his supporters have been fighting hard to protect him.

WL Central, the unofficial WikiLeaks resource, has put together a petition to UK deputy prime minister Nick Clegg, wherein it points out the flaws in the European Arrest Warrant system – specifically the provision that states judges must place the “mutual recognition” of Europe’s often incompatible legal systems above the need to check whether the evidence shows there is a prima facie case to answer.

“The case of Julian Assange, which is presently before the UK Supreme Court, is particularly disturbing,” the petition notes. “His extradition via the EAW is demanded by an investigating prosecutor for questioning in a case concerning consensual but unprotected sex, where he has not been charged, and where the forensic DNA evidence indicates there has been wrongdoing and abuse of process in issuing the extradition warrant.

“Were Assange to be extradited to Sweden, the Swedish judicial system would allow for indefinite pre-trial detention and for trials to be held behind closed doors, heard by a judge and three politically appointed lay jurors who have no legal training.”

Furthermore, the petition adds, there are justifiable fears about a “temporary surrender” mechanism in the US/Sweden bilateral treaty, which allows for Assange’s onward rendition to the US to face potential espionage charges – a secret and sealed indictment that’s been on the books for over a year.

If Assange is extradited to Sweden and then to the United States, there’s no doubt that the internet and WikiLeaks will explode with accusations of miscarriage of justice. And the voices calling out the wrongdoing may well, in time, be vindicated. But that won’t alter the compromises that Assange himself has made in the months since Cablegate. His affiliation with RT, delivering as he has to Putin a convenient vehicle for the verbal assault on America, has robbed him of his moral high ground.

Some commentators have gone as far as to call him a “useful idiot,” but it’s not as simple as that. Assange is just one more man who, like every man, has eventually had to choose his master. DM

"There is nobility in the struggle; you don't have to win." ~ Sharon Pollock